In this land you are leading a party of your heroes only. Your opponents are mainly Lizards and Demons so you shouldn't have any problems (if you don't charge frontally too strong group of monsters). But there are two exceptions: mighty Grozira and Maugron. Grozira is a huge lizard, extremely invulnerable to hits. To kill her you have to attack frontally and use a lot of spells and special skills. Be prepared for healing and resurrecting your heroes. Clues how to defeat Maugron are given later in the solution. 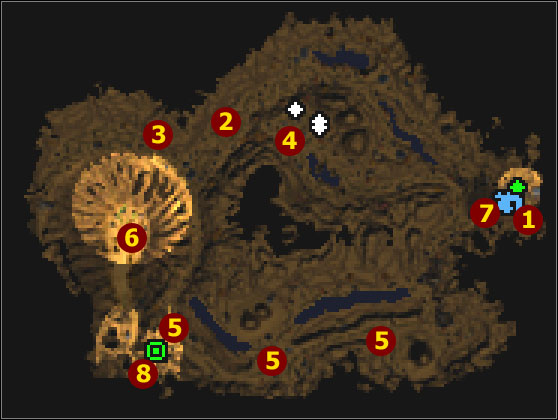 Quest solved: recapture the portal to the Carter and enter it

Quest solved: bring heads of Itza and Shar to Undar

This is the end of the chapter. You solved following quests:

The Shadow Warrior: talk to the Shadow in the Gate of Swords

The Forgotten Lands: find a way to the Magnet Stones

Thunderfist: fight off the attack of the Undead and talk to Ardar

The Banned Portal: recapture the portal to Crater

The Bone Wall: destroy the Bone Wall and Maugron to steal the Black Mirror

Enough World and Time: find Ardar in the Magnet Stones

Westguard: Peace for Westguard: fight off the attack of beasts and destroy their base

The Grey Family - Nyano: bring the Dwarven Brandy to Nyano

The Grey Family - Myra: paint all pictures for Myra

The Grey Family - Sara: bring the Magnet Shard to Sara

The Art Of Forging - Thought and Memory: bring Jandrim all items needed for forging magic daggers