The guide for South Park: The Fractured but Whole serves as a compendium for the game and it contains the descriptions of story missions, puzzles as well as side quests - how to unlock them, rewards and tips for completing these missions. Here, you can also find chapters that focus on game mechanics such as basics of combat, classes or unlocking companions. A map, that appears in numerous descriptions of the missions, is also included. You can also check information about secrets, places that you can discover and a list of Titles which serves as challenges for players.

South Park: The Fractured but Whole is the second entry in the series of games based on adult animated series called South Park. The gameplay didn't change much - we still focus on world exploration, completing absurd and comical quests as well as collecting secrets but the game now offers an option to select difficulty level. This means that the game can be challenge to a player or it can allow them to focus on the story. Although the plot itself is loosely connected to that of the first game, it tells a completely separate story. The heroes ditched the world of sword and magic. Now, they focus on cartoon superheroes.

The guide for South Park: The Fractured but Whole contains:

About South Park: The Fractured But Whole Game Guide 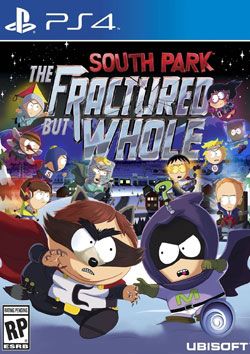 Another installment in an RPG series based on the Comedy Central cult adult-oriented cartoon TV series. The title is a direct sequel to South Park: The Stick of Truth released in 2014. However, unlike that game, this one was created by an Ubisofts subsidiary. Once again you play as the New Kid, whose family just recently moved in to South Park. This tim, Cartman and his group play the roles of superheroes, making up the vigilante group of Coon & Friends. They have to face a new danger, the villainous Professor Chaos. In terms of gameplay mechanics, the game is similar to its predecessor, combining classic RPG elements with turn-based combat, further spiced up with a big doze of nasty humor invented by the creators of the TV series: Matt Stone and Trey Parker.

More About South Park: The Fractured But Whole

Since its premiere, South Park has established a considerable fandom. Over the years, the series creators have been trying to broaden their audience by using different media. Let us investigate how well it worked out.