On this page of SOMA Guide you'll find a walkthrough for Upsilon interior location. 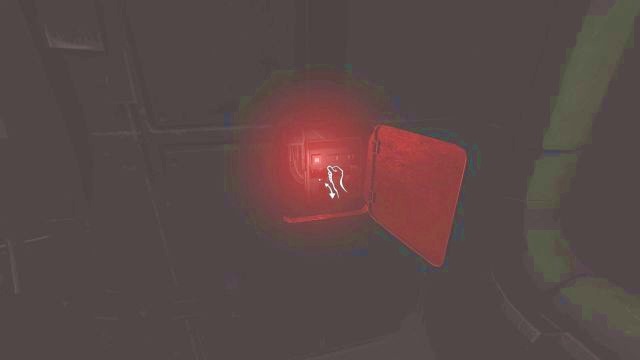 Pull the lever to turn on the light.

The level starts while the character is sitting on the armchair from the previous mission. The room is pitch-black, but you can (and definitely should) solve the problem quite easily - on the opposite side of the room, practically straight ahead from your position there's a box with a red glowing light inside. Approach the box, open the hatch and pull the lever - after a few seconds the room will be lit and you will be able to look around the area carefully. 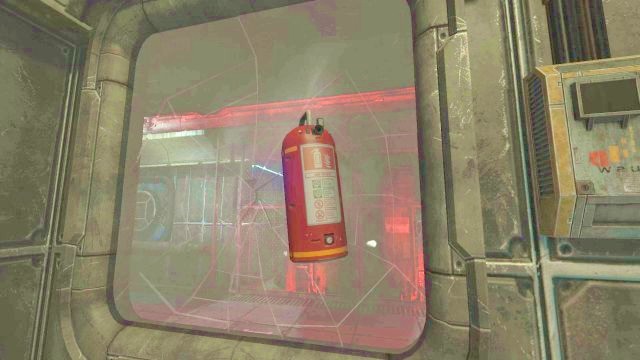 Use a fire extinguisher to smash the window and open up a passageway.

There are two terminals located in the room, the first one (Omnitool Chip Installer) situated on the opposite wall from the fuse box, and the second one next to the armchair on which the character was sitting a moment ago. Both are inaccessible to you at the moment, but remember the location of the first one, because it will come in handy in a moment. The exit from this room is blocked, so you will have to make your own - pick up a fire extinguisher lying by the terminal and use it to smash the window located to the left of the blocked door. 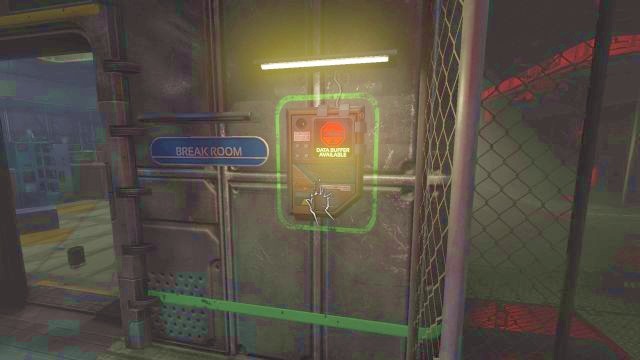 One of numerous chances to perform a Data Buffer.

After smashing the glass, drop the fire extinguisher and jump through the newly created passage. Approach the previously blocked doors and take the pneumatic lock off them, by pulling on the lever. Now you can get back to room by simply pressing the yellow button. Go along the corridor, until you reach the crossroads - you can either go left, straight ahead, or right. The passageway to the right is blocked, so just go to the left. On the wall, right next to the entrance to the room with the "Break Room" sign there's a terminal, which allows you to perform a Data Buffer. Activate it, listen to the "recordings" and get back to the crossroads, as there's nothing else to do in both this room and the nearby toilet. 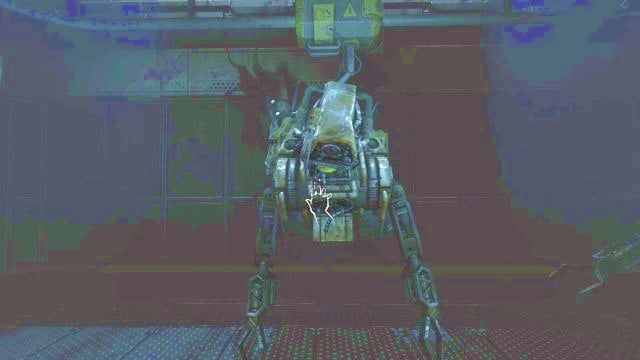 Another Data Buffer - this time a mandatory one.

From here go straight head, and then take a turn to the right - take the pneumatic lock off the doors, open them by pressing the orange button and then get inside. Go to the further section of the room, where a robot on whom you can perform a Data Buffer awaits - it can be easily distinguished by sparks coming from the hanging husk of the machine. You will hear a noise coming from the corridor - prepare yourself, as from here on you will be faced with real threat (enemies). 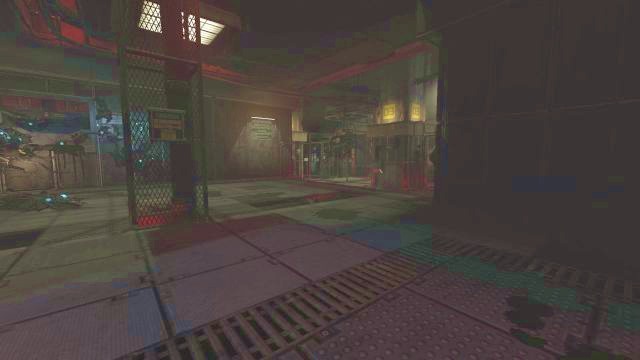 Leave the room and read the description on the screen - the game will inform you about the ability to lean right or left, which will be used numerous times during the playthrough, as enemies have are less likely to spot you when you are leaning out the corner, instead of running straight at them. Go along the corridor, to the right, through the newly unlocked passageway, and then again straight - there's nothing to collect or do here, and the corridor goes in one direction. 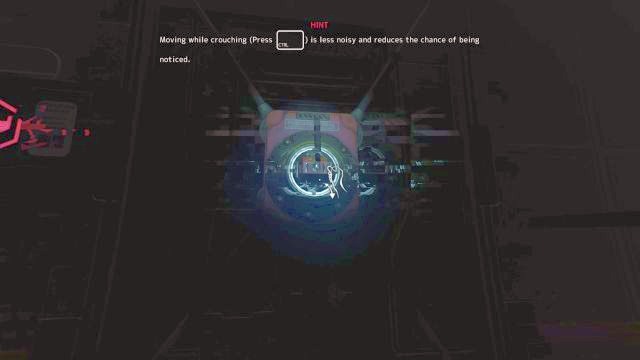 Take the pneumatic lock off and open the door, where a little surprise awaits you...

As soon as the lights will be turned off, you will be informed about another game "mechanic" - crouching and moving while crouching. As you might imagine, by moving in such a manner you are hidden, you move a lot quieter and enemies have to be in your immediate vicinity in order to hear your footsteps - by sprinting everywhere enemies will be able to hear you from several meters (or even different rooms!), which will constantly attract their (hostile) attention. Approach the nearby door (you will locate them by the red light next to them), take off the pneumatic lock and open them. 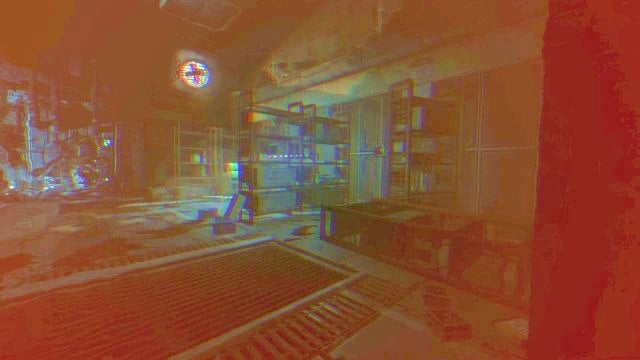 Each time you are hit by the enemy, your screen will become extremely blurry for a short moment.

When the character regains consciousness, enter the room and wait for a while so that Simon can pull himself together, as your vision is probably extremely blurry at the moment. The whole "healing" element is known to those who are familiar with the Call of Duty series, as well as the previous games from the developers of SOMA - with each contact with an enemy (or in some cases environment - such as electricity), Simon will receive a certain amount of damage, which can be signaled by pulsating image and blurry vision. You can get hit a few times only and then the character will die - you can regain health by connecting yourself to a growth (you will learn about it later on in this guide). 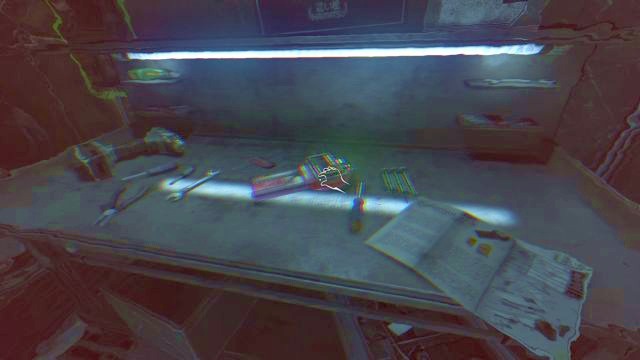 Omnitool lying on the table.

When everything (at least most) goes back to normal, head towards the table located in the corner of the room. There you will find a new toy, Omnitool. You will learn about the functionality of the item later on in the game, but it can be described as a universal key - with the help of Omnitool you will be able to unlock normally inaccessible passageways. Right next to the tool there's also a note, which explains how the Omnitool works - activate it and then put it down. 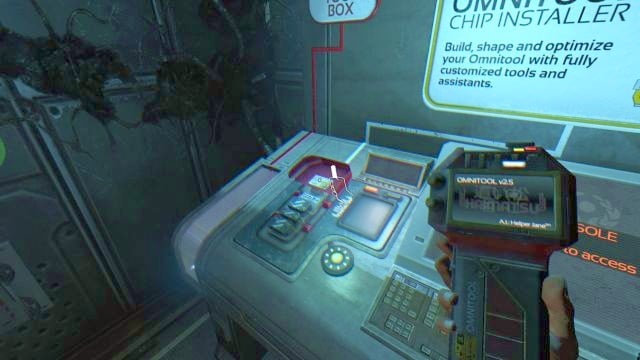 Place the Omnitool in the proper slot.

Get back to the room in which your journey on this station started - to the terminal called "Omnitool Chip Installer" After arrival, place your Omnitool in the special slot on the left side of the terminal - it resembles a credit card reader. Wait for the system to boot and then activate the terminal. Select the "Omnitool" option and then press the "Unlock Tool Box" button. Now leave the terminal. 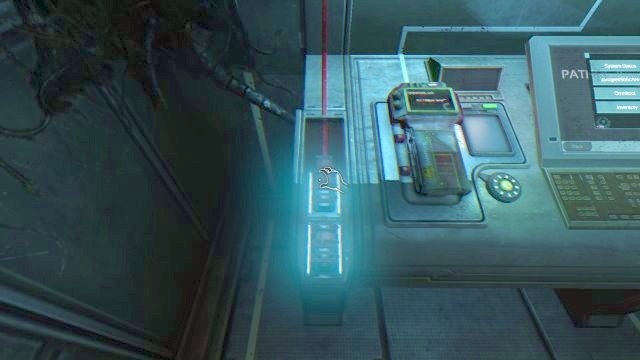 You now have to pick up the Tool Chip. 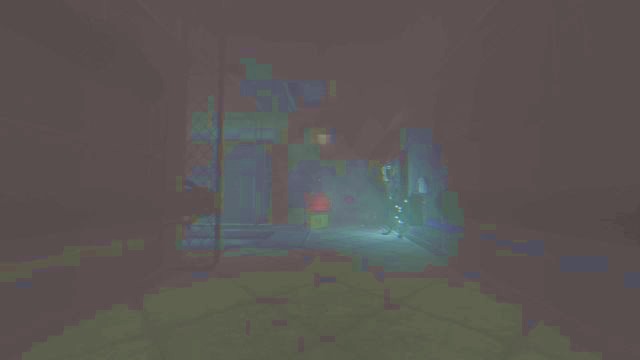 Yup, the visibility is perfect...

The Omnitool was updated, which will be used very soon. In the room, right next to the armchair, there's another terminal - you can read a couple of messages there. Leave the room and head towards the one in which the Omnitool was hidden. Head straight ahead from the door in which you've been hit by the enemy, avoid the cables so that the electricity won't hurt you, turn left and head downstairs (ignore the passageway on the right side - it's a shortcut to the room with the armchair), until you reach locked doors. 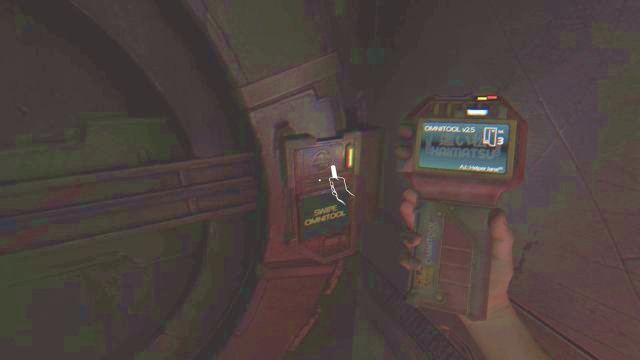 The first usage of the Omnitool.

To open the door, you will need the Omnitool (a control panel which requires the tool has a "Swipe Omnitool" sign on it) with the expansion (Tool Chip) you've collected recently. Activate the control panel, head through the tunnel and enjoy the view. There are four photos on the table on the right side, and on the opposite side of the tunnel there's a Data Buffer terminal. There's nothing else to do or find here, so get to the other side of the tunnel until you reach a small, dark room. 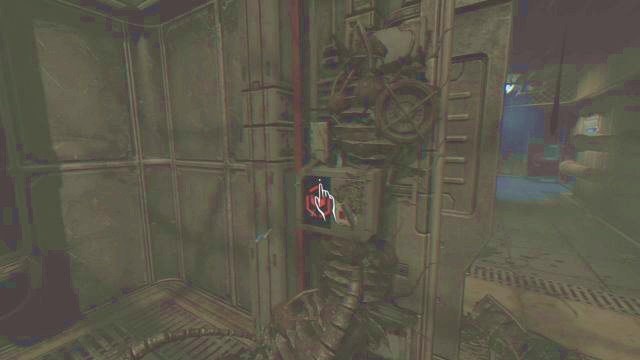 To proceed, you have to activate the button next to the door, which will electrocute the character and turn of the lights. Afterwards, approach a weird growth to which a wire leads from the button you've just pressed and interact with it. You now have to press the button to the left of the growth and then climb up and enter the ventilation shaft. Crawl through the tunnel until you reach a crossroads - turn left, right and then go straight ahead, until you reach an exit. There are other tunnels here as well (4), but all of them are closed. 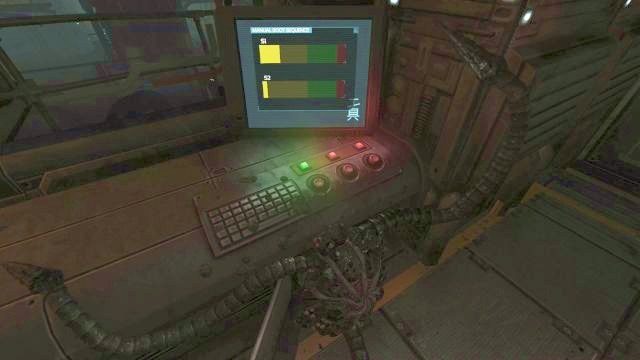 The first and certainly not the last puzzle.

You will end up in Station Control room. Go straight ahead, until you reach a robot lying on the floor, which can be interacted with - right next to it there's a button, which, for now, is inactive (it gives off a red flashing light). In order to unlock it, you must tear off two cables, which are coming from the robot lying on the ground and are connected to the computer - press and hold the interaction button on them, and then just move your cursor away. After getting rid of both of them, press the now yellow button, and then approach the monitor right next to it. There are three buttons located directly beneath it - press the left one first, wait for a moment until the upper bar fills a little, then press the middle one, wait for the second bar to fill, and finish off by pressing the last button. 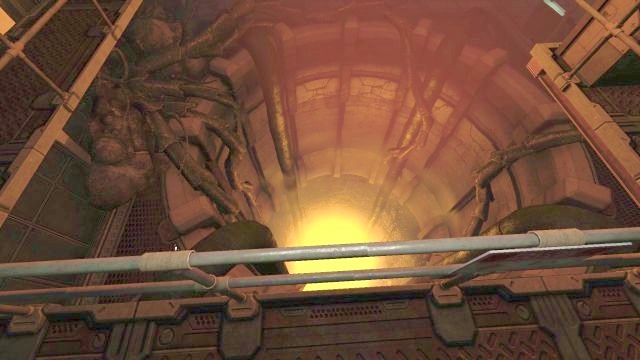 After a short while the reactor should be restarted, after which the radio will start working, and a mysterious person will try to contact you. During the conversation you will learn that you have to get to the Comm Center room, which is located on the upper floor. When the conversation ends, approach the door leading to the reactor, open it and go straight ahead, until you reach a ladder, so that you can get to the lower area. 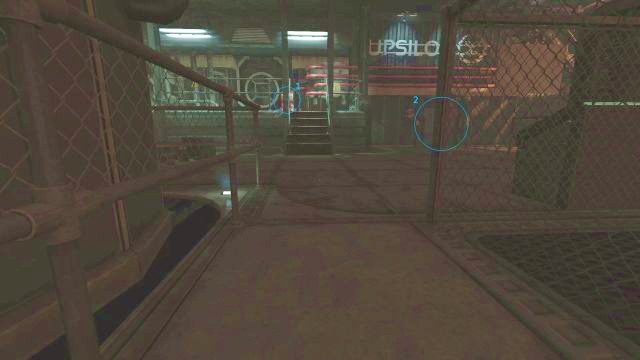 After the character pulls himself together and you regain control, quickly take cover behind something, as there's an enemy (resembling a Big Daddy from the Bioshock series), the first direct threat in the game, coming from the opposite side of the room. Avoid contact with the robot, as it is hostile and will quickly get rid of you. Fortunately, the enemy has no idea where you are currently standing, so it will just passively patrol the area. Wait for the enemy to move away a little and then run through the stairs to the left of the passageway it came from (point 1 on the map above). Turn the valve, and when it breaks quickly run into the mentioned passageway (point 2 on the map above), and wait for the enemy to stop looking for you. 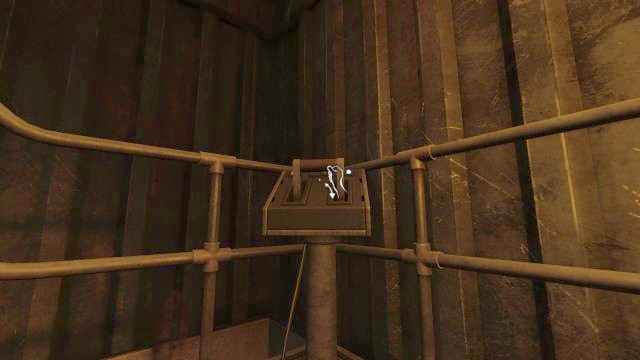 Flip the lever, quickly run upstairs and close the passageway behind you.

When you hear that the robot moved away, leave the hideout carefully, and after making sure that the enemy is far enough, run through the stairs located to the left of your current position. At the top of the staircase there's a level, which, after flipping it, will open a passageway to the upper floor. Be warned, as the enemy will be alarmed yet again - as soon as the passage opens, run to the upper floor and flip the switch found there to close the "door" behind you.