This page of our trophy guide to Sniper Elite 4 contains a detailed description of Fire and Brimstone trophy. This achievement consists in killing 5 enemies with one blow from the air cannon.

Requirements: Kill five enemies with a single artillery strike. In order to be able to do that, you will have to take a flare gun from an enemy, with which you can designate targets for an air strike (you won't be able to get the gun until mission 3).

Mind you that there are two fire modes for the arillery strikes: focused and scattered. The choice depends on the distribution of the targets you want to hit. If it's just one target or a tight group of them, you can use a precise strike - even if the enemies try to run away from the flare, they will get hit. The dispersed air strike should mostly be used to create chaos in large areas - a big, open field with many enemies and explosive objects is a perfect target. 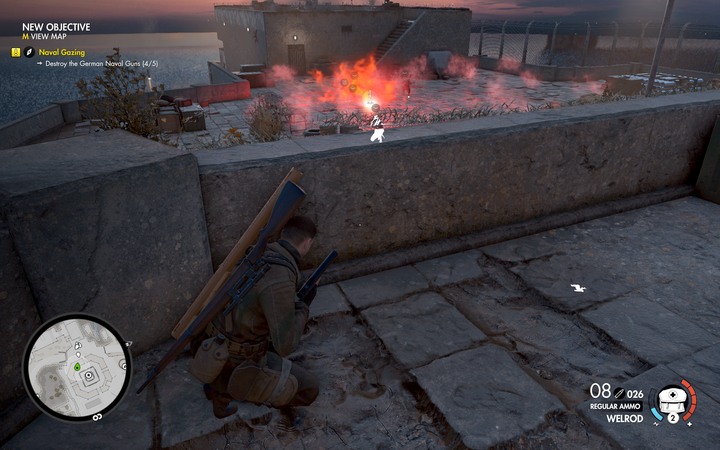 Probably the best opportunity to get this achievement is in mission 6: Megazzeno Facility, where a group of enemies is virtually begging to get an artillery strike going for them - they're west of the antenna (guide map: (M6,6)). Watch out that you don't provoke them to move before you're able to hit them; don't raise an alarm or anything.