Despite the fact that Sniper: Ghost Warrior Contracts is a first-person shooter, there is character development, popular in almost every title today, implemented in the game. The development system is relatively simple here and is based on the use of special tokens and money to increase the effectiveness of the character and unlock new gadgets. In this chapter, we explain how the character development system works, as well as highlight abilities that are worth investing in.

How to unlock new abilities 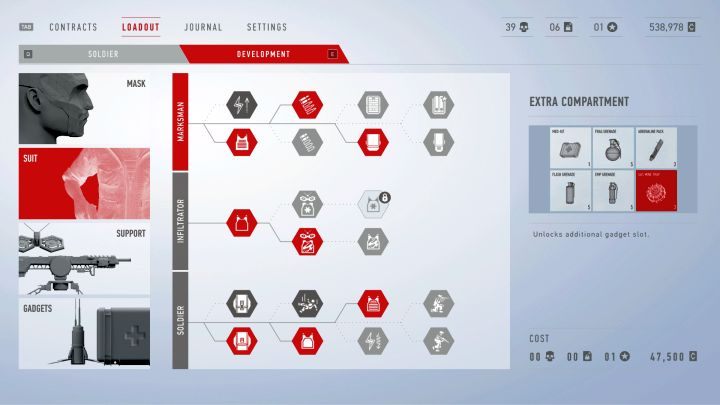 Character development is not difficult, but will allow you to adapt the character to your style of play.

In Sniper: Ghost Warrior Contracts, no experience points are gained to advance to higher character levels. Instead, for the contracts and challenges you complete, as well as the collectibles you acquire, you will be given special tokens. Tokens are then used - together with money, acquired for completing tasks and from the corpses of enemy soldiers - to unlock new abilities and equipment. There are three types of tokens in the game:

To unlock new abilities, from the main menu you need to go to the Loadout tab and then to the Development. Here you can find a few dozen abilities divided between 11 categories, affecting different aspects of the gameplay. If you want to unlock an ability, you just need to click on it. If you have the required number of badges and cash, the ability will be unlocked and automatically activated.

There are, however, two limitations to abilities. First things first, they are unlocked in a specific order, one after another. It means that if you want to unlock an ability from the end of the given development path (the ability located on the right side), you will need to unlock all of the ones preceding it. Secondly, at some levels you will be offered a choice of two abilities - you can unlock both, but only one of them will remain active.

What abilities are worth unlocking?

There are dozens of abilities in the game and initially you will be able to unlock only a handful of them, which is why it is worth knowing which to pay special attention to. You should be especially interested in the following abilities: