This icon was used to mark the points of interest - fast travel zones, exfiltration zones.

Arakchayev fortress is the fourth and, at the same time, the penultimate full-fledged location in Sniper: Ghost Warrior Contracts. This is a relatively small location, however, given the narrow passages and the number of enemies, the exploration takes more time than in the previous places. There are 6 contracts to complete, as well as 6 challenges, 6 collectibles to gather, and 2 Bounties. This Chapter describes the walkthrough of the Arakchayev Fortress.

Get evidence of genetic experiments. 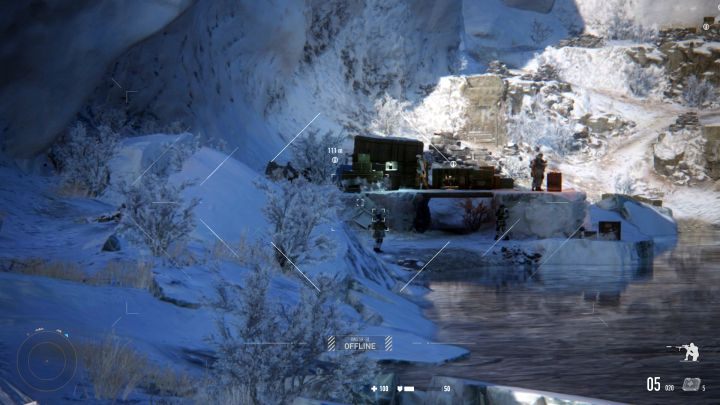 At the very beginning you will get to the enemy outpost.

After a fairly lengthy introduction your first target is located to the East of your position. Immediately after the start you will get to the enemy outpost - in this place you do not have to perform the task of silent elimination, so you can safely fire at these and other enemies. 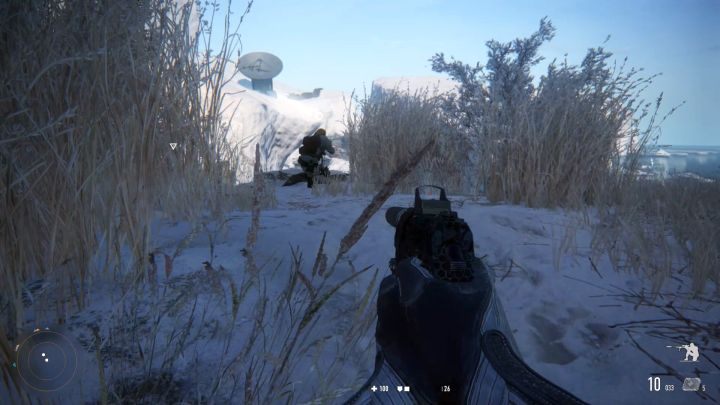 Sniper hidden in the grass - he is worth interrogating.

Continue along the only available trail. Keep to the right side all the time to get to a small elevation. There you will come across an enemy sniper hidden in the grass-interrogate him to get information about the location of enemy troops.

Note-at this point the soldier can "stand up" to you and you will not receive information about the enemy units. 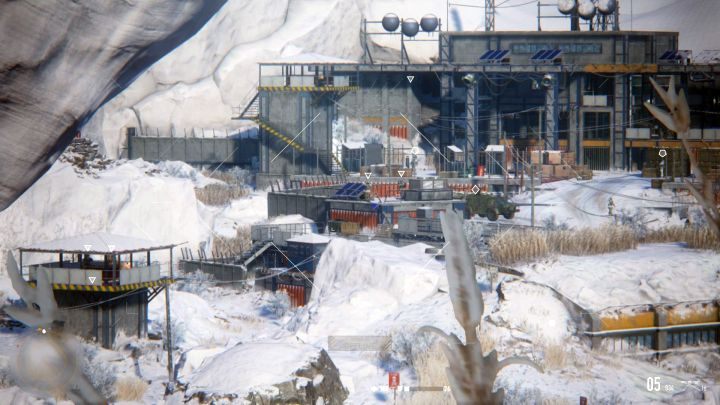 In this location there are a lot of enemies.

Eliminate at once the soldier located to the left of your position and drop to the ground right in front of the enemy base. First of all, eliminate snipers and individual soldiers. Then shoot the enemy patrolling the base of the tower, on the left. Now you need to quickly take down the two soldiers standing on that tower - you can wait until they line up to commit a double kill, or take them down one by one. 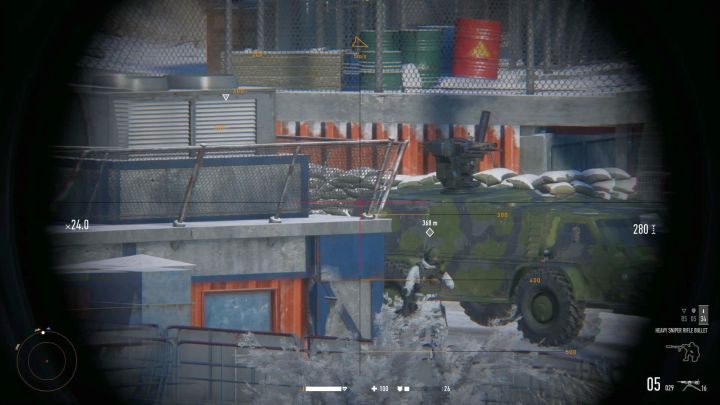 Be careful not to accidentally shoot some explosive object.

Now clear the area of the remaning enemies. Watch out for explosive objects - barrels, fuel cans, and car tanks. One random shot can lead to an explosion that will draw enemies' attention to your position. Here it is necessary to knock out opponents quietly, as they have a mortar. If you are discovered, change your position a few dozen meters to avoid being hit by an artillery shell. 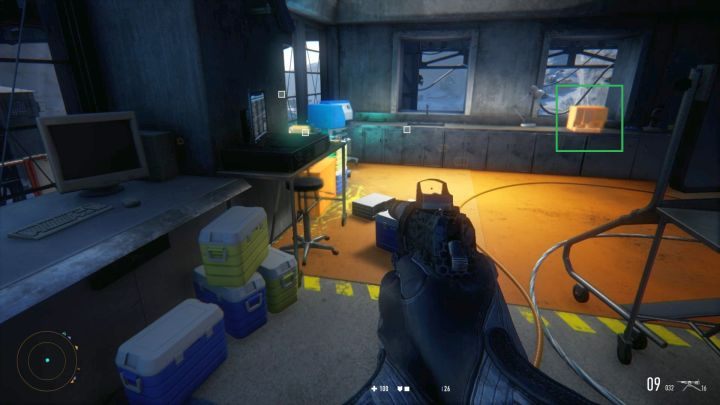 The target of the contract is in a small upper level room.

Once you get rid of the guards, go to the center. But watch out for mines placed at the entrance, you can detect them using the Mask Mode. You must interact with the device in a small room on the top floor of the Institute to finish this contract. 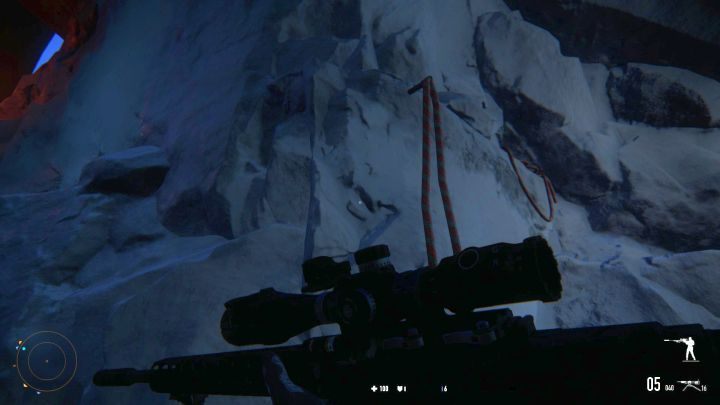 The next climbing stage.

Pick up items from the corpses and go North. Be careful, there is a minefield - use the Mask Mode to bypass the explosives and go into the cave. When you reach the end of the path, climb the wall on the right and go from it to another, this time on the left. Move to the right, and then to another rock ledge to continue onward. 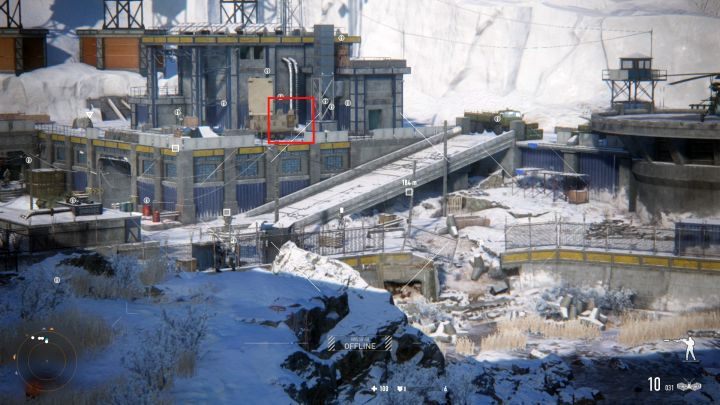 Destroy the disruptor so you can safely mark targets.

You are in an open position, with an enemy base to the North of you. Here is a disruptor - its location can be seen in the image above. If you want to mark enemies, you have to destroy it. Take a little time now to pinpoint the enemies, because there are quite a lot of them here. 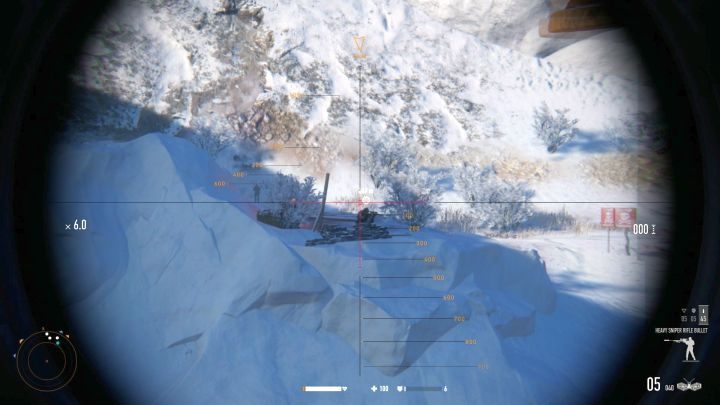 Start with eliminating enemy snipers and individual soldiers. Then take out the enemies marching in pairs - you can wait until they line up for a shot to kill them with one bullet or take them down one by one. 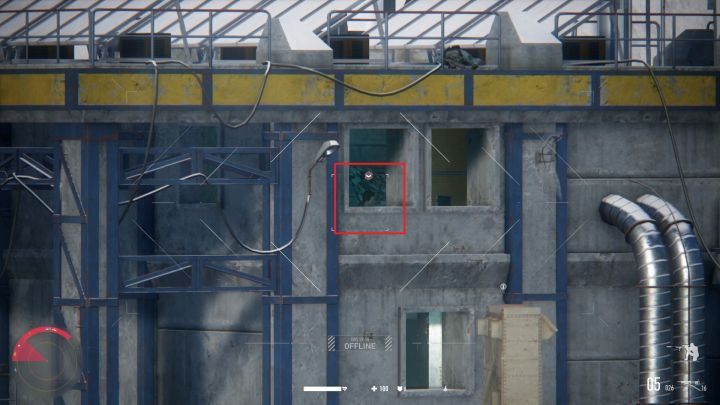 The target of this contract is Nikita Zaytsev.

You can see Nikita from your current location. He is sitting in the main building of the institution, on the top floor-his location is shown in the picture. Kill the enemy to finish this contract. 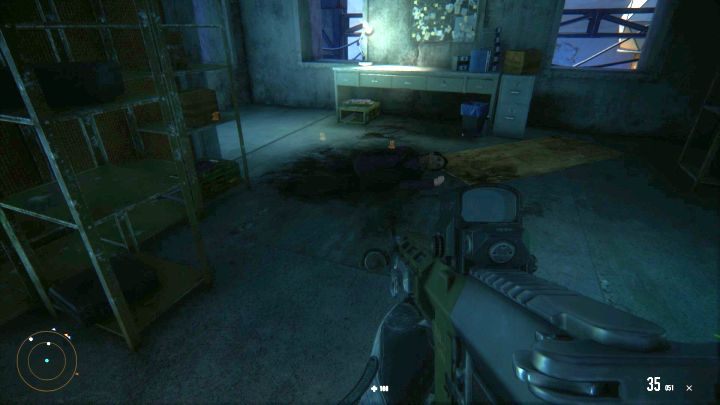 After eliminating Zaytseva, you will need to collect the flash drive from his corpse. Clear the area of the remaining enemies and automatic turrets and go to the place where the target was killed. Interact with his corpse to collect the item and complete this contract. 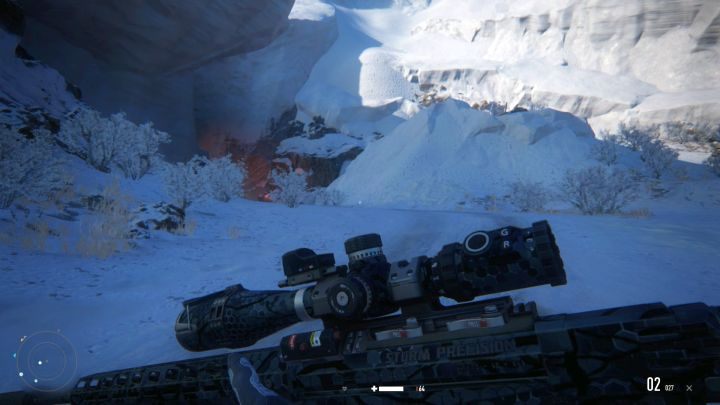 In front of you, you will find a tunnel to which you need to go to come to the enemy's location.

Now you need to go to the location of the fourth contract - this is a small area marked on the map in blue, to the West of your current location. Exit the enemy outpost and run into the tunnel located to the west of it. 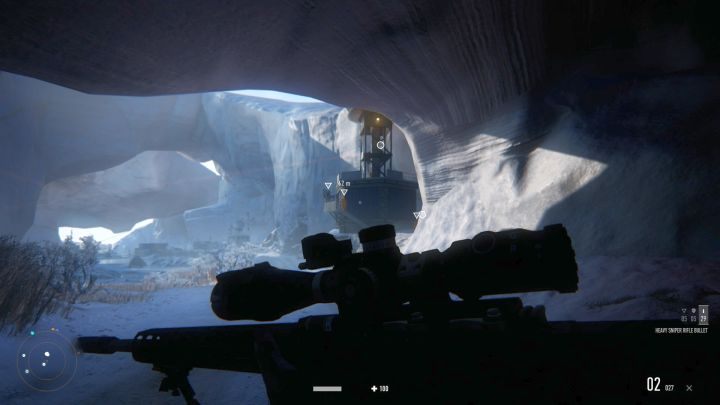 First of all, clear the tower on the right.

You are on a fairly extensive location, which is patrolled by several small enemy groups. Pay attention to the tower on the right-take out the sniper and kill the remaining enemies, and then climb it. 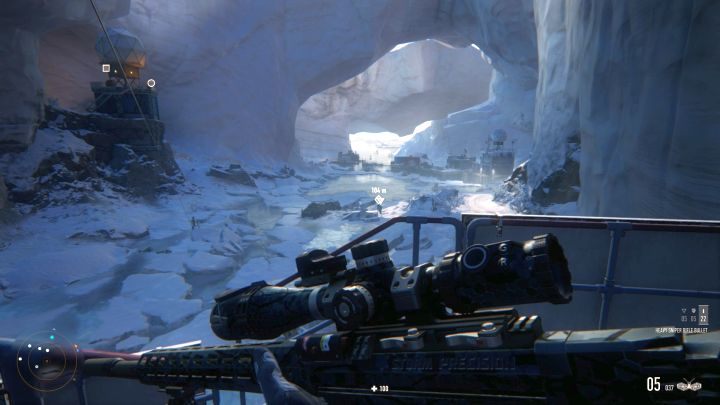 From the top of the tower you will have a view of the surrounding area.

From the tower you can explore the entire area. Find the sniper on the other tower and then the enemies roaming below. Go down now and head to the West, towards the enemy outpost. 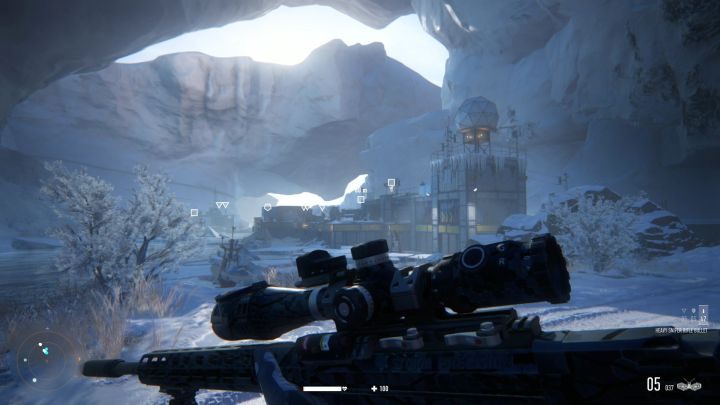 There are over a dozen enemies to eliminate including two heavily armored soldiers. You do not need to worry about the situation - the enemies do not have snipers and mortars on their weapons, so you can safely eliminate them one by one. 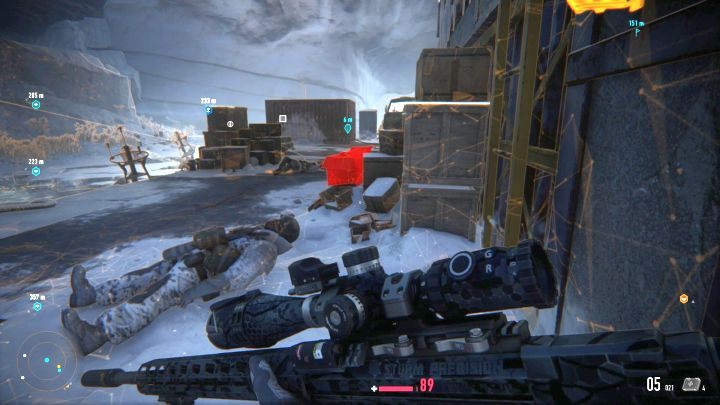 Marked in red is the box you want to interact with.

When you clear the base, go along the wall on the right, jump down to the frozen lake and climb the opposite wall. Be careful, however, because to your right is an automatic turret - a short machine gun burst or a well-aimed shot in the barrel will let you deal with it. Go now to the outpost where the enemies used to be and interaction with the boxes standing by the wall of the building to finish this contract. 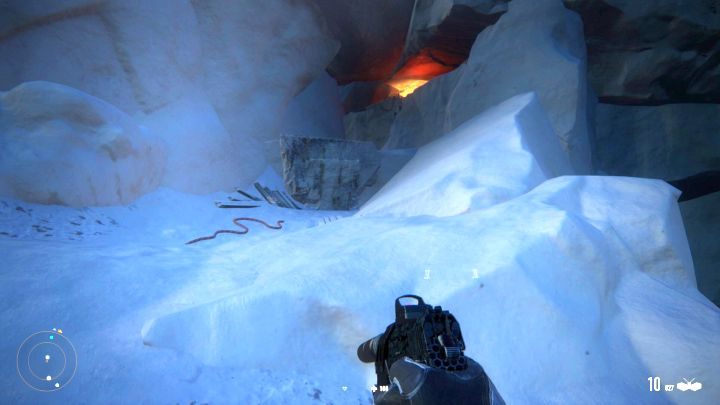 The path leading to the enemy outpost.

When facing the enemy outpost, turn the camera to the North - you will see there a path towards the mountain. Go there and you'll pass an exfiltration point. You will get to the last enemy base where the last two targets are located. 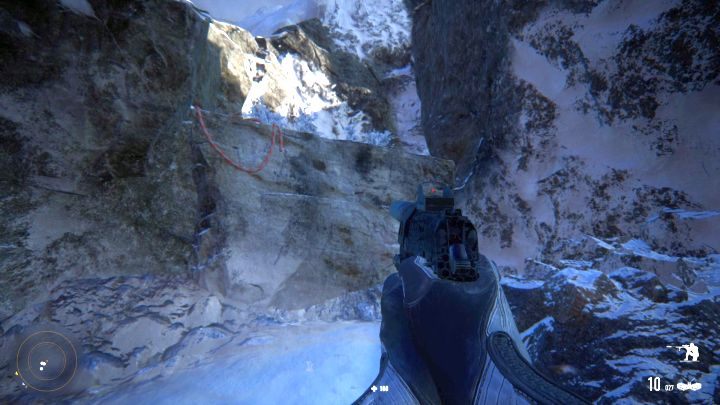 You have to climb this wall to get to the enemy base.

Turn left and climb the rocks to the top. From here, turn and walk all the way along the path going up. You will reach a great vantage point from where you can see all the enemies inside the base as well as your target. 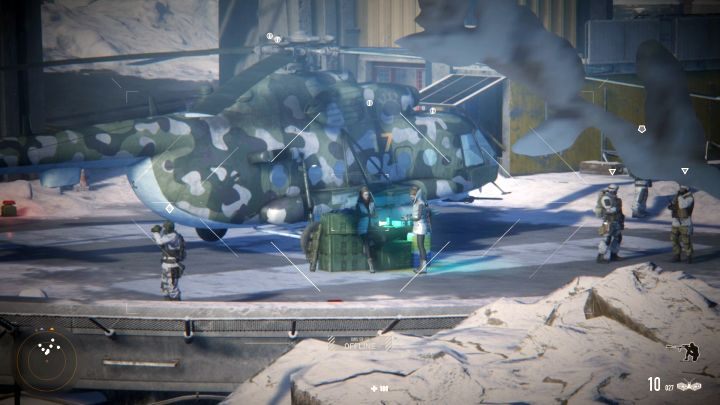 Your target her doppelganger.

Antanasia X. Alikhanova-the main target. Interestingly, the woman hired a double to attract the attention of the enemy, that is, you. Women are visually no different, they are distinguished by one fact-the double smokes cigarettes, the real doctor Antanasia doesn't. 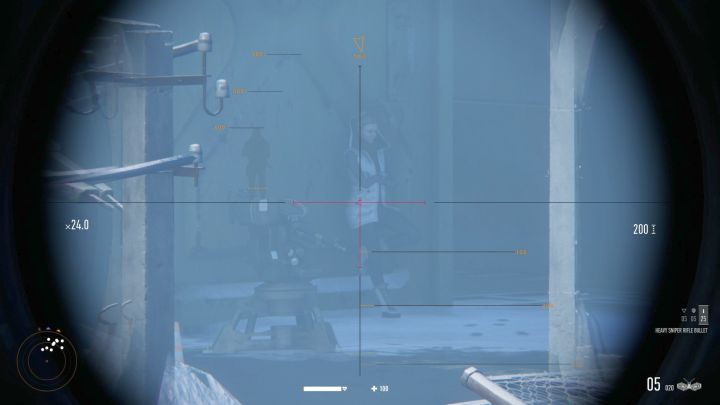 After a short observation, you can easily find the true target.

You have to wait until the women are separated-then they will visit several places, and the double will stop for a "smoke". Use this time to knock out the local snipers and isolated enemies - be careful, however, not to raise alarm as then your target will hide in the building. Follow now the movement of both women-when you notice one of them with a cigarette in her hand, quickly move on to the other and eliminate her, ending this contract.

Note-after killing the true doctor, don't kill her Doppelganger. She won't shoot you, and if she stays alive, you'll complete one of the challenges in this location. 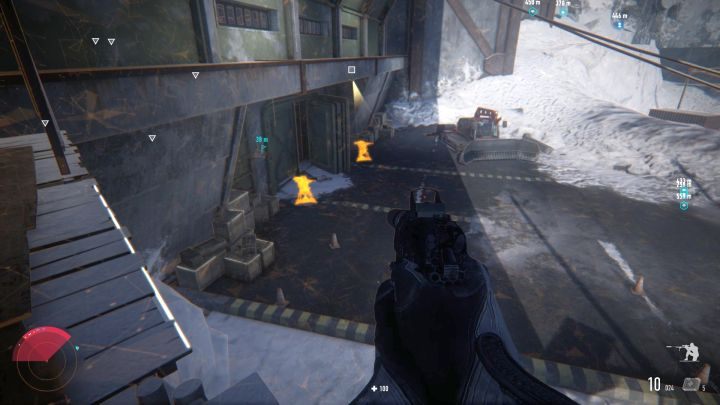 Below you can see the entrance to the building.

The last contract remained. You will find the target in the building (at the end of the facility, next to which the real doctor most probably stood. Kill the remaining enemies and go to the big gate. Behind the door there is an automatic turret, and inside you have to fight several soldiers. 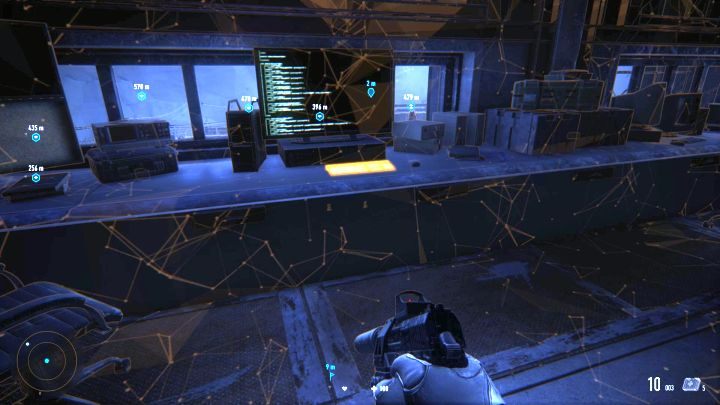 A computer that needs to be hacked.

When you cope with them, go up to the top floor of the building and interact with one of the local computers - activating the Mask Mode will help you find it. This will end this the latest contract within this locations.

All contracts in this location are completed-now you can search for collectibles (the way to get them is described in a separate chapter of this guide) or complete challenges - if you want to complete this stage and move on to the next, go to any exfiltration zone.