There are 3 optional objectives in Mission 7 (Secret Weapons) of Sniper Elite 5 which you can complete in addition to the main objectives. Thanks to our walkthrough, you'll know where to get the shipment intel, how to properly investigate the Weapons Lab and how to destroy the castle radio tower.

Acquire Intel on the Shipments 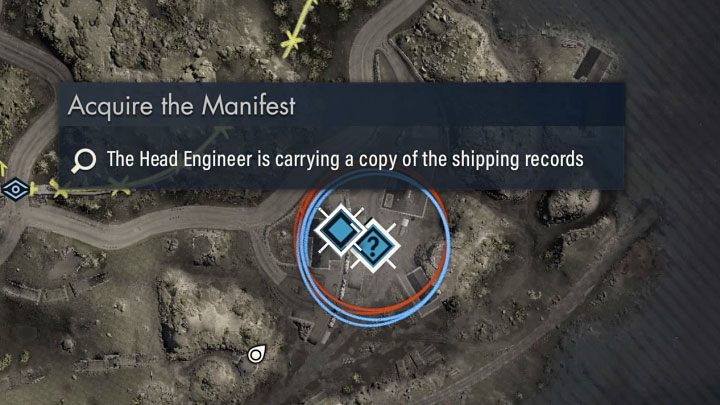 This objective will appear in the journal only after you've approached the train station which is located in the southeastern part of the map. This area is viable for exploration (blue area).

Watch out for the elite sniper from the small hill to the east of the station - get rid of him with a takedown. You can also climb the western hill and take out enemies from the train station area from a distance. 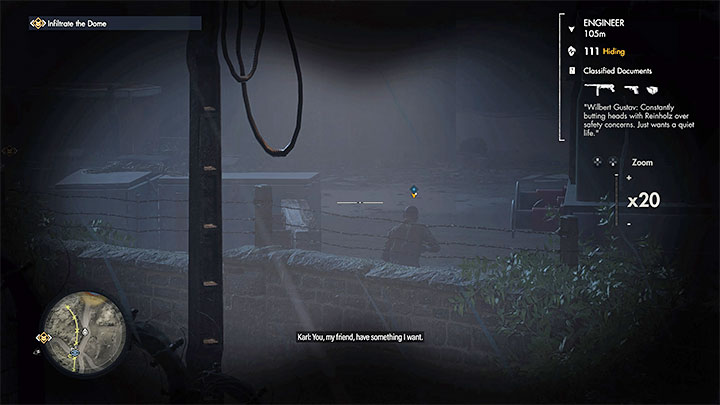 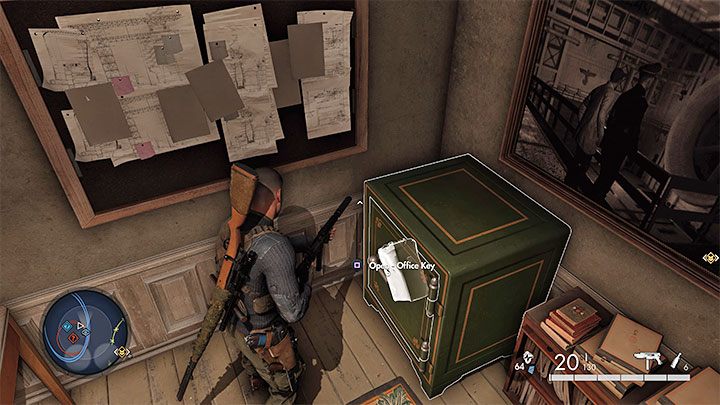 There are 2 tasks to complete and the first one is to obtain intel . You can get it in two ways: 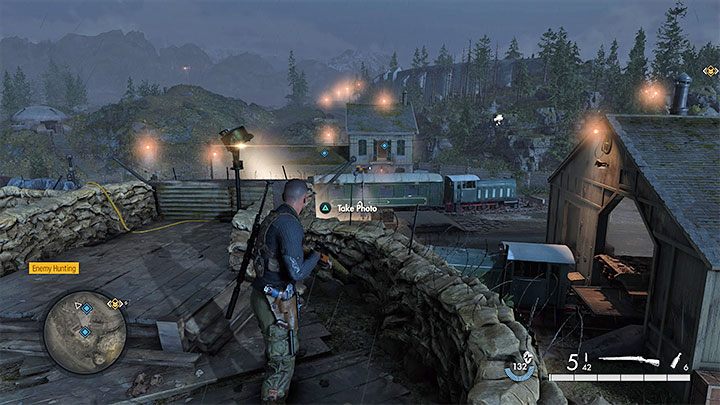 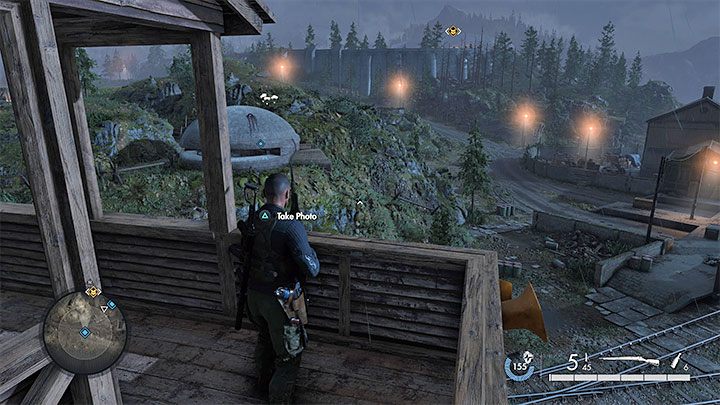 The second task is to photograph the area and to go through with it, you need to access one of the viewpoints (screenshots above).

Once you reached a viewpoint, place yourself in the right area and press the interaction button. The hero will automatically take photos, without activating the photo mode. 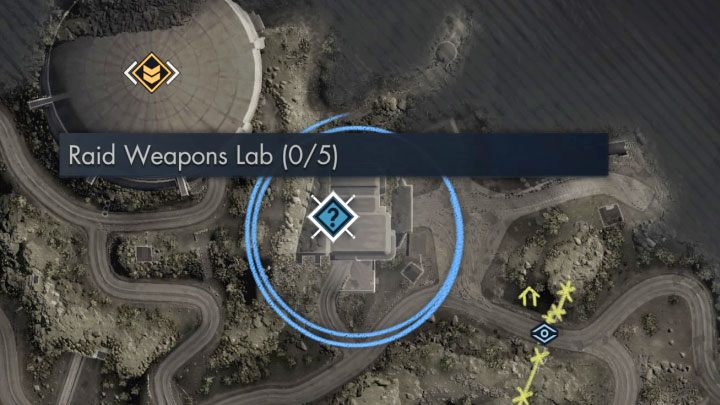 The laboratory is located in the northeastern part of the map (screenshot above). The task has to be unlocked first before you can go through with it. The Weapons Lab objective appears in your journal only after completing the previous side mission (the one from the train station) 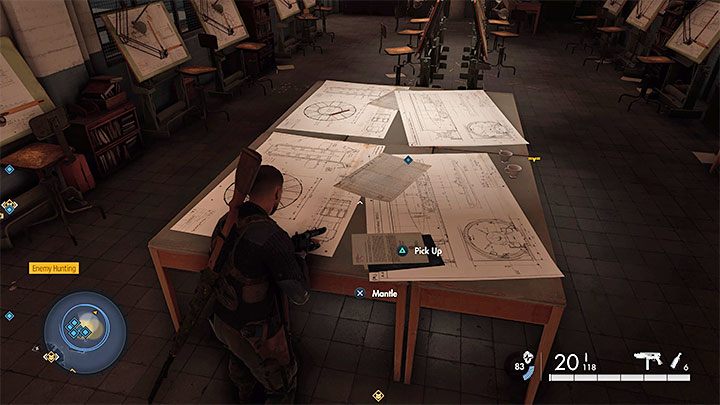 You can reach the enemy building in any way you like. Your task is to search it and find 5 pieces of evidence . Here is their list (it can be picked up in any order).

A-4B Logistical Issues document can be found on the top floor of the laboratory. 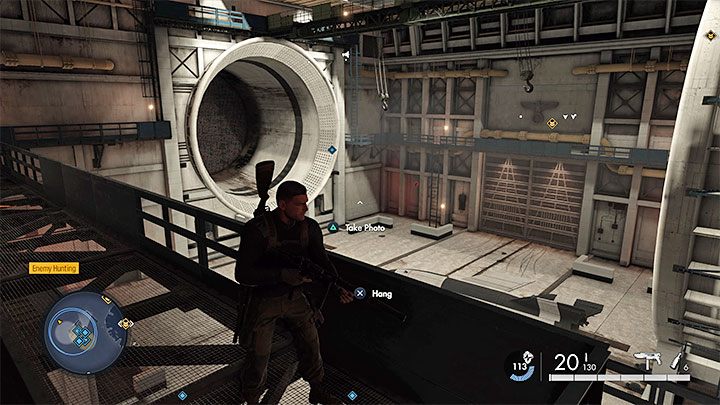 The next objective is to photograph the V2 rocket storage hall - it can be done either before or after dropping the rocket on Jungers (Kill List Target). 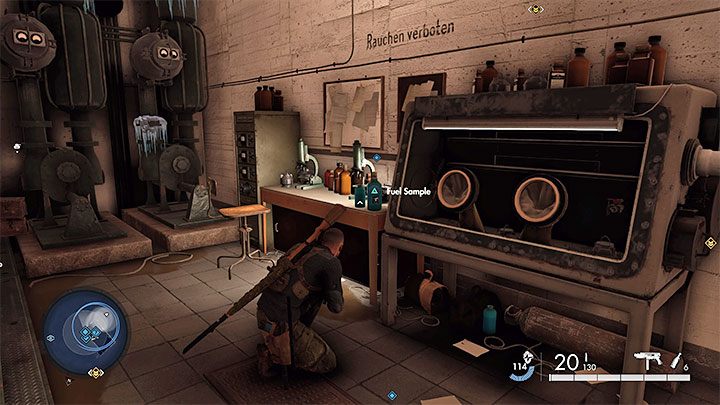 Fuel Sample is found on the middle level near the eastern staircase. 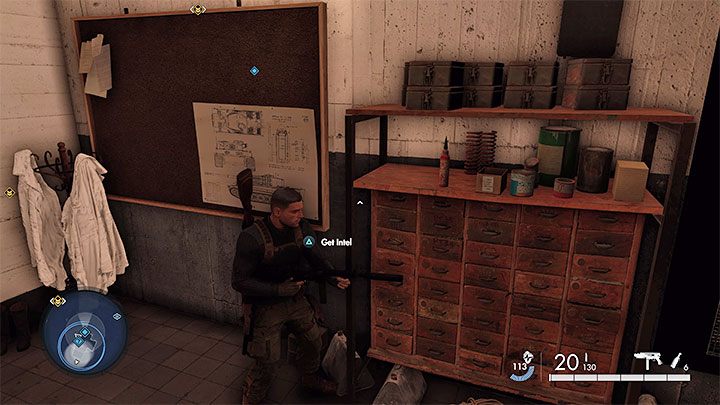 Next piece is on the bottom level of the laboratory, attached to a blackboard. 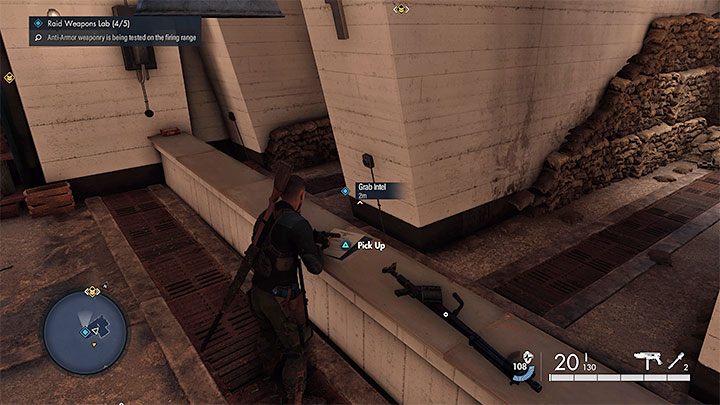 The final piece is in the shooting range on the bottom level, next to anti-tank weapon. 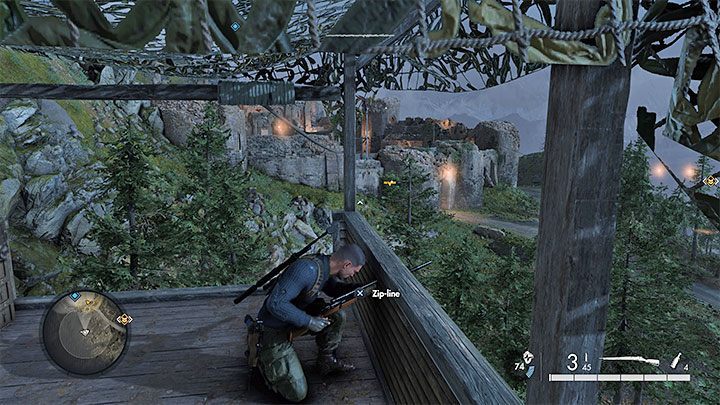 This quest involves visiting a castle in the south-west corner of the map . On the way to the castle, watch out for the sniper from the southern hill - he can be inside or next to a small observation tower.

The castle can be infiltrated in different ways. The most obvious option is to use the main entrance , but it is guarded well. To the east of the castle there is an observation tower (the one used by the aforementioned sniper) and there you can zipline to the upper walls . 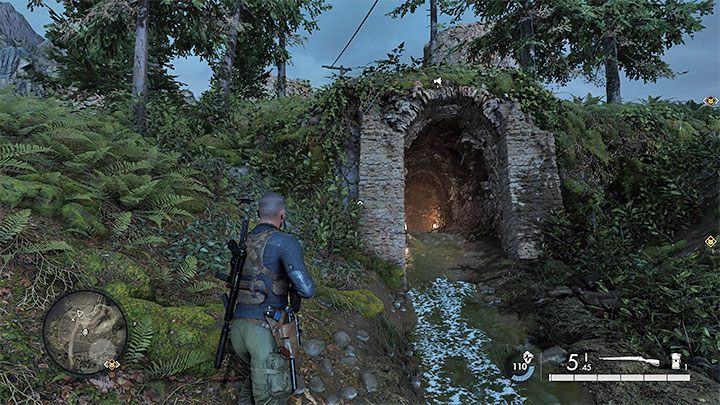 Another way is to explore the area under the eastern walls of the castle. There you will find the sewer entrance shown in the picture. You can go through them and, after removing the boards and using the ladders, sneak into the interior. 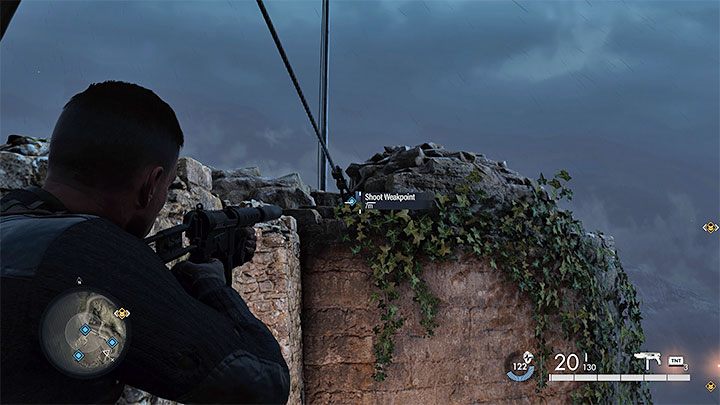 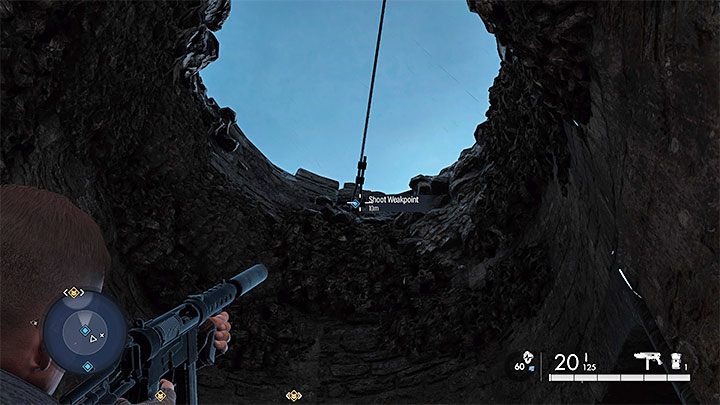 Sabotaging the radio tower takes place similarly to the objective from Mission 5. There are two possible ways of doing this :

The first way is to sabotage 2 cables . They are attached to the walls in the northern part of the castle. You can destroy cables by shooting at the hooks . 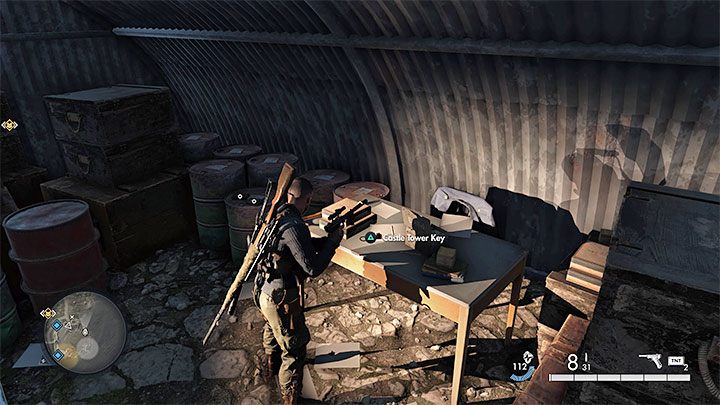 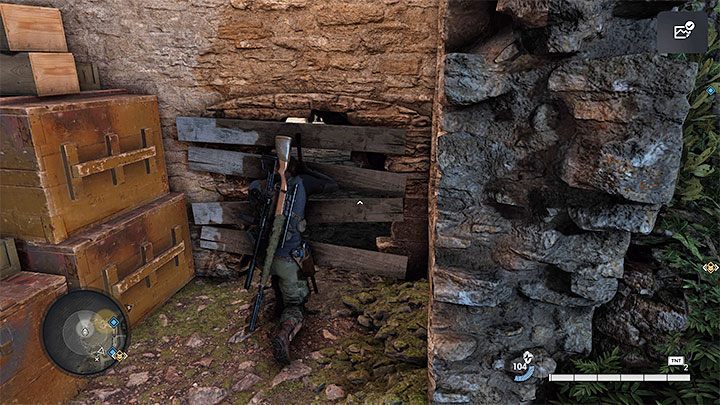 The second way is to sabotage the generator . To do this, you need to get to the main tower . The key to it (Castle Tower Key) can be found on at least two nearby guards, or on the table next to the courtyard. Alternatively, you can destroy the boards shown in picture 2, which are on the side of the tower and reveal the opening, or blow up the main door with an explosive. 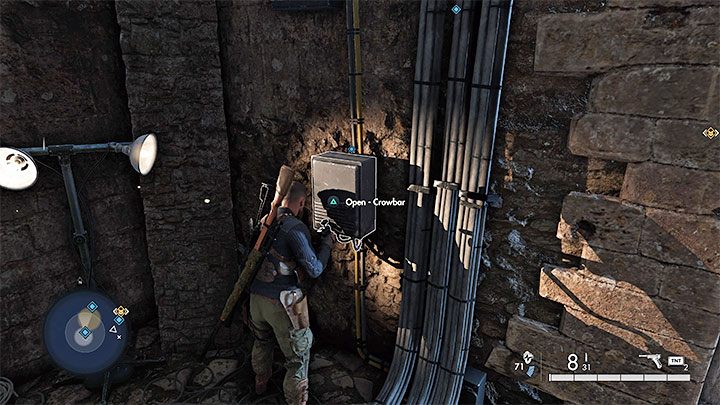 The generator you're looking for is on the ground floor of the tower. You have to use the crowbar on the box on the wall (the screenshot above).

In both cases described above, the action will lead to a cut-scene depicting a succesful sabotage and the objective will be complete.