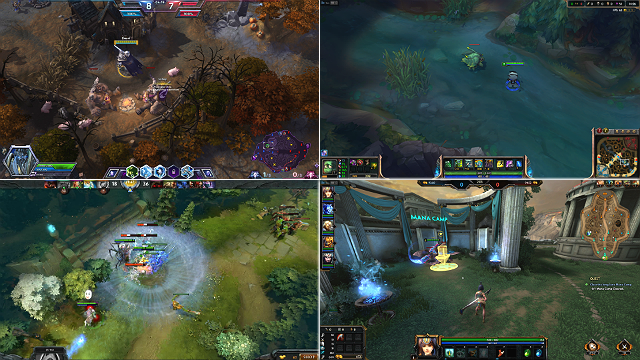 SMITE is the MOBA (Multiplayer Online Battle Arena) type game in which the players fight with each other on the particular map within a special set of rules. Each of the players controls one character, in SMITE the characters are Gods. They are known from different mythologies, and each of them has some unique abilities, which develop together with the experience level. Nevertheless, SMITE is different from the typical MOBA game, such as DoTA or LoL. In here the player controls his/her character with the W,S,A,D keys, unlike the other games in which the player controls his/her character with the mouse buttons. What is more, the view is different in here. The player sees the character from behind it's back, not from the above. Two teams fight with each other to win, as it usually is the aim in games of that type. In order to achieve that, you firstly need to gain experience, to promote your God to the higher levels and to develop his abilities. Gold is also very important, you can get for killing (Last Hitting) minions or killing the hostile characters. The rule is simple - the more gold you have, the better items you have and the stronger your character gets. During the game you need to get through the enemy's buildings - watchtower and Phoenix. After beating the fiery bird the way to the enemy's base is open. In the base there is the last enemy - Titan. The game is over after you defeat Titan.

SMITE is based on the micro - paying, the usage of the game is free. Each of the playable characters, runs and runic books can be get for Valor points, which the player gets for playing particular games. For the real money the player can buy Stones, for which the player can buy the additional skins, which in turn are not available for Valor. Skins have the visual value only and they do not impact the statistics. Stones have one more big advantage, namely, you can get Gods faster.

This site is not associated with and/or endorsed by the Hi-Rez Studios or Hi-Rez Studios. All logos and images are copyrighted by their respective owners.