Participating in auctions is an interesting way to acquire new things. For example, doing this will allow you to win factories. I would strongly recommend that you try and win at least several of these objects during a single game. I'm sure that you know exactly how this works. I wouldn't recommend spending too much money on a single building, so you shouldn't try to win an auction without worrying about the profits. The only exception is when you plan on having a full control over a created production chain. You should also consider buying a factory much earlier. This will allow you to buy it for a lower price, before the building starts making profits. Sadly, you won't be able to behave like that all the time. Nevertheless, you should try winning most of the profitable factories, especially if you have to increase the value of your company in order to fulfill one of the mission objectives. Don't forget about your current budget. Buying a factory is only a small step. You must have some additional cash to buy trains and establish new connections. Focus most of your attention on modifying or creating new tracks. Factories should only provide you with additional income. They aren't your absolute priority. 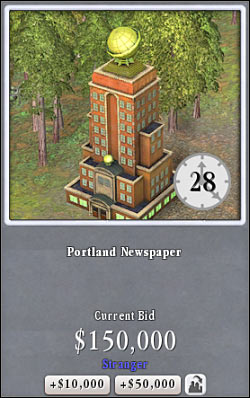 Try taking over a few factories. This will provide you with additional income. Most of the factories will also expand during the course of the game. As a result, you will be able to manufacture more goods from a single factory object.

Participating in auctions will also allow you to win new kinds of inventions. These auctions will appear on your screen automatically and it's up to you whether you want to participate or not. If you manage to win an auction, you will receive 10 year exclusivity to use a newly acquired invention. This is more than enough to outrun your opponents, so you should consider buying at least a few of them. Here's the list of the most valuable inventions:

Halves Maintenance Cost on All Trains - This is by far one of the most useful inventions, especially if you have a larger number of locomotives and they haven't been replaced in a longer period of time.

Increased Freight Pulling Power for All Trains - This is also a very interesting inventions. Winning this bonus will allow you to haul more carriages. It's very useful, especially if you plan on creating valuable production chains.

25% Passenger Delivery Bonus - An interesting invention. You won't be using its advantages all the time, however if you prefer connecting cities rather than factories you might find it to be very useful. It would also be wise to add terminals to each large city that has been connected to your grid.

Halves Cost to Build Bridges - You won't have to build a lot of bridges during the game, so you should only consider buying this invention if there are some nasty hills in the area. There's also a tunnel invention, however it would be best to ignore it.

25% Cheaper to Build Rails - I think it's rather obvious that you should winning this invention only in the early part of the game. Decreasing costs of building tracks will help you to expand your railroad empire. You will also be able to use saved up money on new terminals or factories.

I guess I should also warn you that most of the computer players will try to win these inventions at all costs. As a result, you won't be able to win all of these auctions. Try focusing on several inventions that will be most valuable to you during the course of the mission. 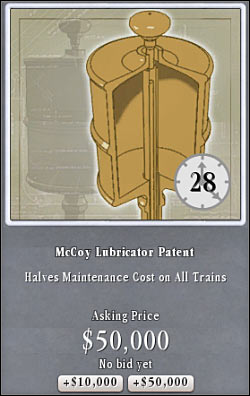 You should try winning at least a few inventions, however don't spend all of your money on them!