Important! Playing with the computer players isn't a mandatory thing in "Sid Meier's Railroads!". You will be able to disable this feature without any other problems. You can also establish exactly how many of these companies should appear on the game map. I'd personally recommend allowing your competition to show up, mostly because you'll have more fun playing the game. It would be best to choose two AI players. Thanks to that, you won't have to worry about not having enough space to build new connections. You will have to monitor their movements all the time. The choice is yours. Bear in mind, however, that disabling the competition will also cancel some of the given assignments.

One of the more interesting features of the game involves a possibility of buying and selling stocks of the railroad companies. I would recommend that you proceed with the tutorial mission of the game. Thanks to that, you'll learn a lot more about how all of this works. You could also take a look at your instruction manual, however all of these things aren't too difficult to understand. There are, however, a few things that you should know about. Each time you start a new game, it would be wise to sell some of your stocks. This will allow you to receive additional funds. You will be able to use this money to build new connections. This will help you to organize a better start and your company would grow faster than usual. It's very important, especially if you're playing on a map with a larger number of hills. This always results in lower speeds of your trains and more expensive connections. You wouldn't be able to afford most of these tracks right away. Once you've expanded your empire, you should consider buying the stocks again. This is important, because other companies would have tried to do the same thing. Buying stocks of other railroad companies is always a good idea. It will also be required to fulfill some of the more difficult mission objectives. Make sure that you have a large number of profitable connections before you decide to buy stocks! You should focus most of your attention on expanding to other territories of the map.

The second important thing involves grids of other companies. AI players are playing quite aggressively, especially later during the game. Your competitors will try to connect lines to "your" cities and factories. This will force you to modify your existing connections. First of all, you will have to order some of your trains to wait for a full load. You should also consider buying a larger number of locomotives, however this would require you to purchase parallel tracks. It's even more difficult with the resource stations (mines, farms, sawmills, ranches...). Try investing some of your money into better locomotives, so you won't have to wait for too long for a single cycle to be completed. Ordering the trains to wait for a full load works perfectly, so try using this feature all the time. Also, make sure that the resources are being delivered without any delays, so you won't start losing money here. 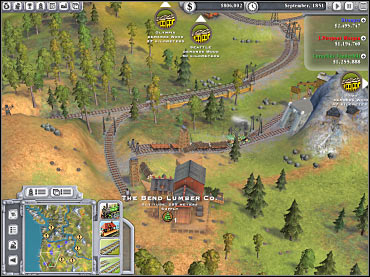 You will have to observe your opponents. They may try to steal some of your resources by building a depot near your factory. You will have to react to these actions, by purchasing new trains or ordering them to wait for a full load.