I'm sure that you already know that locomotives are your only means of transportation. As a result, you will have to pay a close attention to what is happening to them. There are also a few important things for you to know about. Most of the game scenarios start in the middle of the 19th century. This means that you'll only have a few steam locomotives at your disposal. They will be very slow and you'll be able to haul only a small number of carriages. This is a very important feature. You won't be able to attach too many carriages. Otherwise you would have paralyzed your trains, mostly because reaching their destinations would take too long and you wouldn't be receiving a large income from these kinds of operations. As a result, try attaching two or three carriages to the locomotive. You should be increasing this value throughout the progress of the scenario. You should also take a closer look at the preferred cargo feature. This becomes important later during the mission, because in the early part of the game you won't be allowed to choose between several different locomotives. Passenger locomotives should be used to transport civilians and mail. I would recommend buying these trains to establish connections between larger cities of the area. Freight locomotives, on the other hand, must be used to carry resources and manufactured goods. I'm sure that you're be using them more often, especially if you plan on delivering luxurious goods to nearby towns. You will also have an opportunity to use locomotives with a mixed specialty. Choose them if you don't want to feel so restricted.

The second important thing involves maintenance costs of your locomotives. You should be monitoring the current situation of your company. Take a closer look at the profit bar. It will show you exactly how much a single delivery can offer. You mustn't forget about older locomotives. Using them will result in an increasing maintenance cost. Sadly, you won't be able to repair your trains. Instead, you will have to buy new locomotives from time to time. I would recommend performing this action once you have reached a second level of the scenario. After that, try upgrading your trains every 15-20 years. Some connections may stay a little bit longer, especially if the trains aren't carrying heavier cargo. You should also wait for new models to be unlocked. Most of them will offer lower maintenance costs, as well as more power (=higher speeds). Diesel locomotives are very useful during the second and the final phase of the game. Try buying them as soon as possible.

There's only one more thing here. You will have to examine your each connection very carefully. I wouldn't recommend adding too many carriages, especially if this is a mountain area of if have a larger number of bridges. You will be able to attach up to eight carriages to a single locomotive, however you should only consider doing this in the final phase of the game, once you've unlocked all interesting models. Also, try taking a closer look at the connection window. This will help you to calculate what you can lose or gain by adding new carriages to the train. 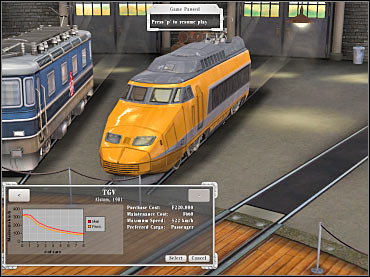 The game will unlock new locomotives from time to time. Consider buying some of them. This will help you to upgrade some of the existing connections.