Important! I'd strongly recommend that you PAUSE the game each time you decide to construct something new. The game won't limit your actions in any way, so you'll be able to move freely around the map. It's very important that you don't forget about this feature, mostly because you won't have a lot of time to fulfill some of the mission objectives. Activating the pause option will allow you to plan your each action very carefully, without having to worry about anything else.

I'm sure that you already know that all new tracks are being constructed automatically. This means that you won't be able to create them on your own, by adding specific objects. I think it was a good idea, however you will have to be very careful. Some of the longer connections may be very expensive. Additionally, the game will often try to create unwanted bridges. It would be best to try and modify these settings by moving your mouse around. In some cases, you should be able to find a cheaper route. Bear in mind, though, that sometimes it won't be possible. Some of the more expensive connections have to be built, especially if there are mountains in the area. This means that you wouldn't be able to avoid having at least one tunnel. I would recommend building connections using smaller steps. This will allow you to make crucial adjustments. You should pay attention to your surroundings. In some cases, you should be able to find an entirely different route to reach a desired city or factory. Don't forget about your locomotives. Building longer connections would mean smaller income, mostly because reaching a target area would take more time.

If you decide to build tracks using smaller steps, you should be just fine. Like I've said before, it's very important that you try to move your mouse. The game will show construction costs, so you won't have any problems figuring out which connection seems to be the most interesting one. You should also remember about your future connections. Try leaving an open space, so you'll be able to expand a connection or add some new lines to your existing grid. Try avoiding bridges and tunnels, especially if you don't have the necessary inventions (they would allow you to lower construction costs). You mustn't forget about the possibility of creating parallel tracks. This is very important, especially near big cities. Observe your trains in order to find out which parts of your grid need to be upgraded in the first place. 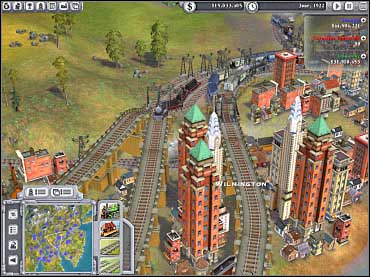 You should avoid building too many bridges and tunnels. These objects may come in handy, but only when you can't build some kind of an alternate route or if the area is being occupied by other railroad companies.