In this chapter of Civilization 6 game guide, you will find a description of Phoenicia. You will learn more about the advantages of this nation, its unique special traits and the best way to manage Phoenicia. You will also discover how to use the Bireme, the unique sea unit and the unique port district of Cothon. 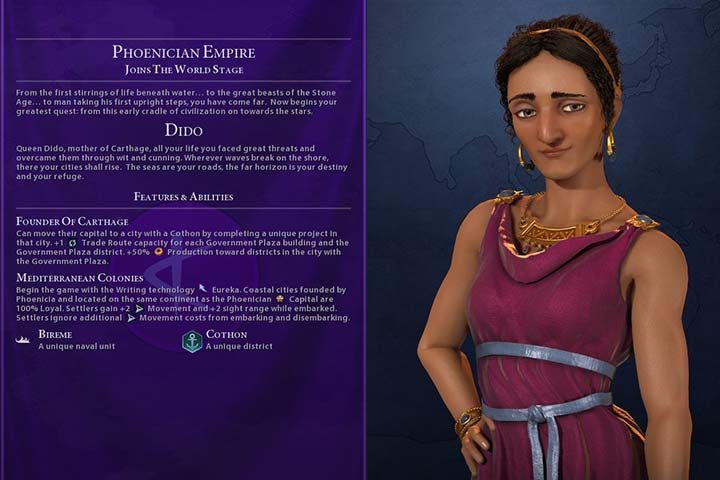 Although Phoenicia is the real naval power, it mostly depends on trading. The founder of Carthage enables the players to complete a special project that allows moving the capital to a different city. It is something that no other nation in the game or the previous expansion pack is capable of. This skill can be used in a variety of ways.

Phoenicia is based on centralized government. This means that districts in a city with a government plaza are built faster. If you can develop a city to a high population level, you should start building the districts with the government plaza. Thanks to that you will create other districts twice as fast. You can only have a single district like that in your empire, so pick the city with it wisely. The government plaza provides a bonus for the neighborhood (+1 for each type of district) so it is a good idea to build districts close to each other.

Furthermore, trading in a city with a government plaza can be very profitable. You can gain up to 4 additional trade routes (for the district and for 3 buildings) for such city and a route for the port/business district. Phoenicia is most effective when it comes to sea trade. Use Bireme, the unique unit, to protect your routes. It replaces Galley in the antic age. Thanks to this unit the sea trade routes cannot be attacked in the proximity of 4 fields. You should have a few such units, even during more advanced ages, until the difference of power between the naval units will become crushing.

Cothon, Phoenicia's unique port district, is another advantage of this nation. Units in the border of the city with such district are healed within a single turn! It is a very strong skill that can make Phoenicia's fleet invincible during defense. This bonus is active till the end of the match, so building sea bases (a city with a port district) close to enemy territory might be a great idea for conducting naval wars. Additionally, Cothon produces naval units and settlers twice faster.

The final, very important special trait, is improved settlers. In Phoenicia this unit moves 2 fields faster while on the sea, it has 2 fields longer sight (which means up to 5 fields!) and it doesn't lose movement points while shipping. It means that settlers are the best scouts early in the game, especially if your area is filled with seas and oceans. It is a good idea to use your settler to reveal a large part of sea areas close to your borders. More information gained in a shorter time will enable you to make more informed decisions about the placement of your next city.

Phoenicia is real naval power. It focuses on quick colonization, trading, and it can quickly create large fleets. It is best to start a game on a map dominated with seas and oceans, like archipelagos or tectonic islands. This will enable you to fully take advantage of this nation's powers. After creating a large network of cities on many continents you can decide how you want to win. Phoenicia isn't focused on a specific victory type, it is a versatile nation. However, if you plan on winning through culture or religion, you will have to put a bit more effort into it.