This section of the Civilization 6 guide includes a complete set of information on city-states. Here you can learn what city-states are in Civilization VI, why should you be interested in them, and what are their main types in the game.

City-states are settlements that are controlled only by the AI. They are much more developed than native villages or barbarian camps. They report to the same rules as cities controlled by the players. They can recruit their own units, but cannot achieve victory in the game.

Below, you'll find a number of useful information on how they function, and what can be gained by giving them your attention.

You cannot establish diplomatic relations with their leaders, as they are non-existent. Basically, they stay neutral, but you can exert some influence on them if you receive the title of sovereign. You'll become a sovereign if you'll have the biggest number of emissaries in the given city. To receive this status, you'll need at least 3 emissaries. You should also be aware that every city - state function as single settlements, and don't create smaller cities, so the sovereign status means that you fully control a unofficial nation. There is a number of benefits present, which are dependent on type of the city and the number of sent emissaries, but more info can be found in the chapters dedicated to individual types of cities.

Every scenario has a different number of city-states, and you can send your emissaries only when you discover a city's location on the map. This is why it's especially important to send scouts, and revealing the whole map on which the current scenario takes place. Take a look on the benefits resulting from being a sovereign, and you'll see that neglecting this element can cost you a lot.

You should constantly broaden your sphere of influence, to control the biggest number of neutral villages. Of course, you can just ignore them, but it will quickly get back to you. Eventually, you can try to conquer a city-state, but this process takes time, and it's very costly, so this is not a viable choice at the beginning of the game - try the peaceful way. You should know that as a sovereign, you can call the controlled city to send military support, which is especially important when you are at war with a player-controlled civilization. Remember that if you decide to conquer a city-state that is controlled by a player, this action is synonymous with declaring war! 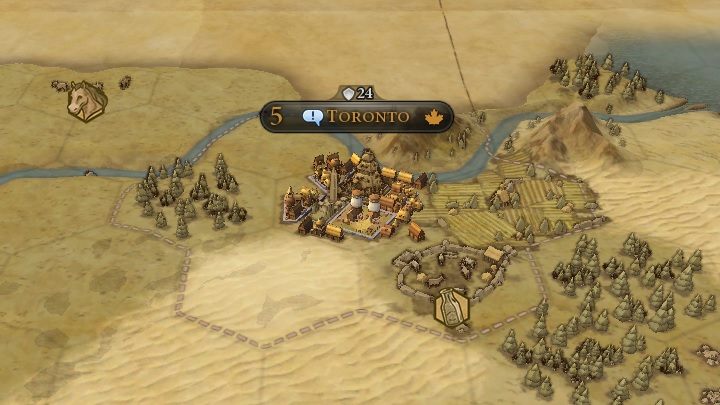 The names of city-states of the same kind are always marked in the same color.

The city-states are divided into Trade, Cultural, Militaristic, Scientific, Industrial, and Religious. It all depends on the type of victory you want to achieve - with a clear objective, you can invest more influence into a city-state that can bring you closer to it. Of course, to have a full control over this aspect, you need to discover every available part of the map. Depending on the map type, you should develop Sailing, as reaching a city-state before other players allows you to take the top spot. You should also consider this: if you discover a city-state first, your emissary is sent there automatically.

Sometimes, city-states give you special quests, that can be either completed, or ignored. Accomplishing a mission gives you a certain benefit, which will be detailed in the description of the quest. If you can manage it, do it as quickly as possible, as most of the benefits are connected directly to technological and ideological growth of your nation. You should also remember about dividing resources between your capital and the city-state of which you are a sovereign. If you have the title, you automatically take over all the resources in the city, and if the need arises, you can build upgrades on its territory.

Remember that the received benefits have certain requirements, so try to balance the division of emissaries between the individual cities. Keep the sovereign status at all costs, but be aware of the requirements that has to be fulfilled in order to reap the bonuses. If your position in a trade city is not threatened, and your Commercial Hub is still not active, avoid sacrificing more emissaries to receive the bonus, as you won't be able to use it. Especially as throughout the whole scenario, all players have full knowledge of the number of enemy emissaries present in the given city-state, which will allow you to counter any attempts to take over your sphere of influence.