The chapter below of Civilization 6 game guide is fully dedicated to AI controlled barbarians. You'll learn about how do barbarians work in Civilization VI, types of camps that you'll encounter during the game, and how to withstand their attacks. The chapter contains sections that divide the problem into prime factors. 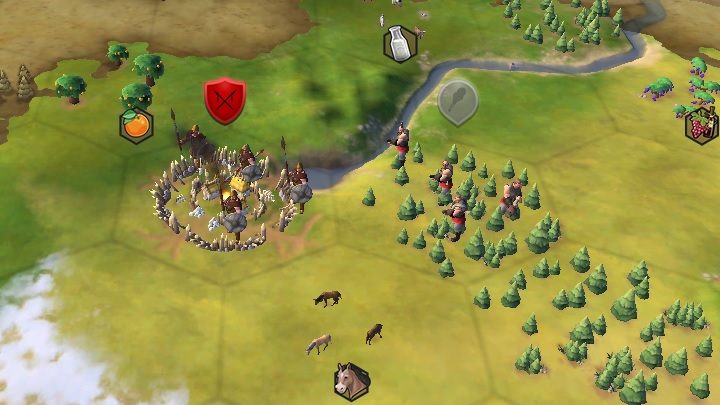 Barbarian camps can be recognized thanks to a characteristic palisade

Barbarian raids are one of the biggest threats to Your settlement in the initial stages of the game. Their camps are placed in random locations around the map. If you destroy a barbarian camp, another one will spawn after some time, located in an area that is not monitored by any of the players. Each camp receives a scout unit, which will start the exploration of the surrounding areas in search of player-controlled cities, to learn of their locations and deliver this knowledge to its home base.

How do barbarians work? 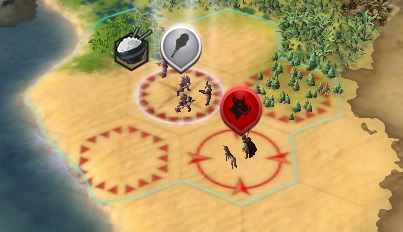 Try to attack the barbarians every chance you get

When a scout learns the location of a prosperous city, he returns to his camp, which begins recruiting units that will invade the city. If a barbarian scout approached your city during the gameplay, remember to order any of your military troops to follow it. The unsuspecting scout will lead his village to its quick demise, as you can nip the danger in the bud. If you kill the scout, the barbarian village won't send any troops to your area, as the scout has to return with the news first.

The barbarian presence can be used to unlock certain technologies and ideas, and your military forces can get some easy experience by attacking barbarian units. Remember to enable one of the Military Policies bonuses against barbarians, and you'll emerge unscathed from any encounter. If you want to focus on experience gain, allow the scout to return to his village. Soon, a number of barbarian units will travel in your direction. You can eliminate them in a safe distance from your settlement. Make sure to depose of the barbarians quickly, as it may turn out that another scout approached your settlement, and you may not be strong enough to handle war on two fronts. You can allow some barbarian units to attack, then encircle the village and destroy it.

You should be aware that barbarian units, just as every enemy unit, can take over your civilian units. If you won't keep your borders secure, it may happen that barbarians had stormed your lands, plundered them, destroyed the buildings, and took all civilian units with them. Under no circumstance, you cannot allow such situations to happen. Don't ever leave a city without a garrison. Otherwise, you'll quickly face constant barbarian attacks, while other civilizations will be developing, and you won't be able to catch them to even the score.

Grasping the situation and swift reactions to barbarian attacks are the most appropriate solutions. The biggest mistake is complete ignorance in regard of their actions, as you may be forced to face a number of units, which will lead you to certain losses. You may be able to stop them before they approach your town, avoiding any damages, but the sheer number of enemy forces may result in the defeat of your troops. As a result, you'll have to postpone the creation of important buildings and districts, in favor of recruiting units, which may even clear out your coffers. Each of these situations makes you drift away from total victory, so avoid making such mistakes.

It should be noted that barbarian units are not technically advanced, and they don't upgrade their forces. There are three types of barbarian units, depending on the settlement location:

Remember that the camps are generated in random locations obscured by the fog of war, and every other player has to deal with their raids. After some time, their presence is more of an advantage rather than a nuisance, so make sure to send scouts often, and return to the areas which you've already visited. If you discover a village and destroy it before others, you'll deny your enemy additional gold supplies.

Destroying a barbarian camp not only increases the feeling of safety, but also increases the amount of gold in the treasury. Additionally, you can use them to unlock a few bonuses, which will allow you to research certain technologies. You should also keep in mind that battling barbarians increases the respect for your civilization in the eyes of your rivals, and improves diplomatic relations with them.