In CIV you don't have few governments with fixed advantages and disadvantages.

You can build your political system from five pieces: government, legal, labor, economy and religion. In every category there are five possible choices - so, finally you have 25 possible versions of governments.

Every choice has some merits and flaws and some of them are better working together than apart. 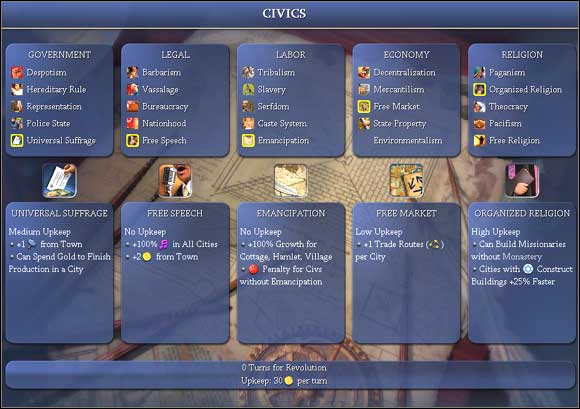 I'll start to analyse from looking close on every civic option, and after that I would like to propose some combinations of civics most useful in my opinion.

A simple way of keeping order in all your cities. Especially useful in early-game when you don't have enough luxuries resources or appropriate buildings/Wonders. Very helpful in case of war - when after conquering enemy city, your armies while healing wounds can keep in this same time an order in new cities.

+3 research per every specialist in cities, + 3 happy in our 4 biggest cities.

This is properly one of the most often used government options. The research bonus is huge - but only if you use a specialists. In case of civilization where research is based mainly on scientist specialists this civic almost double scientific output! That's why I used this option whenever I can.

Used only in case when you are planning a long war and need an edge. I've used it in case of total war, when my aim is to completely destroy big and powerful nation. It's enabling you to produce huge armies, fighting a long war and avoiding serious social uneasiness.

+1 Production from towns, can spend Gold to hurry Production.

An interesting choice. Its main advantage is possibility of spending Gold to buy Production in all your cities. This works for all things except projects.

The Gold rush is really expensive making this option usually practical only in emergency.

On the other hand, if we have a lot of Gold and ideally have The Kremlin Wonder (halves price for the buying Production) it's possible to quickly modernise all your cites and armies even if you have the limited Production output. It is very expensive but extremely useful in particular case of when you just researched some critical technology (like assembly line) which can significantly change of situation of your civilization.

+2 xp for every new military unit, some additional free units

One of my favourite civics. Huge boost of capital is most valuable in early-game, when capital is notably much more advanced than rest of your cities. When in medium-game you have a lot of highly developed Cottages the free speech becomes interesting alternative. Hoverer even in late-game in some situations this can be the best legal option.

+2 happy in city with barracks, can draft citizens

Most useful in case when we are suddenly attacked or we see that war is quickly approaching and don't have an army big enough. The draft can save our lives making possible to create an army very fast - but the price is quite high (-3 happiness and - 1 size in city for one unit) and military units created this way are relatively inexperienced.

+2 to happiness helps keeping an order when drafting citizens - but usually this bonus only is not enough.

Huge boost of culture and commerce - the latter only if you have a lot of towns.

Usefulness of this option is heavily dependent on number of Towns (most advanced version of Cottages) and usually you have to carefully consider whether it isn't better to keep bureaucracy after all.

Bonus to culture is more generally functional - if you use a culture as a tool of expansion it is an obvious choice.

Not very often used - this way of hurry Production is rather expensive and makes some social uneasiness. In emergency can by handy, also used if you have a really quick growth and some population loses are acceptable.

Probably most often used civic option. No limits of specialists' numbers can be very useful despite of your way of development. 80% of game time I use this option.

Doubled speed of Cottages, Hamlets and Villages growth, negative influence on happiness of civilizations without emancipation.

Not very often used, even if +100% to cottages grown is quite nice. Penalty for the other civilisations is not so important - it heavily dependent on how many other civilizations choose this civic. The biggest drawback of this option is that you cannot use a caste system - and that's why a usually avoid emancipation. The caste system is better in almost every situation.

+1 free specialist in every city, no foreign trade routes

Can be used only if you don't have a profitable trade route with your neighbourhood (for example we avoid the open borders with everyone) - and in this case a free specialist are really helpful.

Hoverer in most situations losing the most profitable trade route just for the advantage of one specialist is a rather poor trade-off.

+1 trade route in every city

One of the most useful options. Commerce from trade routes (especially in coastal cites) are noteworthy and important - and new trade route is really nice.

No maintenance cost from distance to palace, +1 Food form workshop and watermill.

Very interesting although specific choice. Except significant cities cost reduction its gives an option to indirectly improve your Production output. The Food bonus makes possible to swarm your grasslands with workshops because this improvement lost its biggest disadvantage -1 to Food, but keeps +4 Production bonus (when we research Communism we already have maximum profits form Workshop).

This requires not only proper technology but also a lot of preparation and put your civilization on a rather narrow patch of development if you like to use full potential of this option.

However if you plan a global military conquest State Property will be our best friend.

+6 health in all cites, +1 happy per every forest and jungle in the city reach.

Helps in cities grown in advanced game - boost to health is huge, but usually not very effective. This civic is available very late in the game, when you typically have a lot of health resources, your biggest cites have many buildings helping in growth, and with Ecology we get a recycling centre - building which reduce to zero negative health bonus made by other buildings. This civic can be useful only if health is a major problem of your civilization, in other cases - I don't see the point of use it

Civics from this group require to work presence of state religion in city. Exception from this rule are paganism and free religion.

A very useful and early available option. Bonus to building Production works also in case of Wonders and easy access to missionary helps very much in quick spread of religion. One drawback is the cost of this civic.

+2 xp for every build military unit, no non-state religion spread

Like vassalage, it gives additional experience to military units - but does not require the resignation from bureaucracy. That's why it should be far more often used when you are looking for bonus experience.

Bonus for Great Person points is huge - without any other additions it gives two times more GP! If you based your strategy on use of GP this civic is must-have.

However the extra cost of units support makes any war (except of defensive one) extremely costly.

No state religion, +1 happy per every religion in city, +10% research in all empire

Quite interesting alternative for the other religious option. Useful in two situations: