There are 7 religions in this game - each one is achieved by the civilization that first researches the proper advancement:

Three first (Buddhism, Hinduism, Judaism) can be founded quite fast, the next three (Christianity, Confucianism, Taoism) require some more time but can be quickened using The Oracle Wonder. The last one - Islam - is discovered last. If you want to become a religion founder - first three are really hard to take before AI discovers them (on higher difficulties), but the rest, if you really like to find one of them, are almost always easy to take before your competitors. Islam can by treated like "last chance religion" - if you can't discover the rest, this one is usually easy to take - but will require the lot of time commitment.

The main question is if you really need to find a religion ourselves? It depends. The main drawback is the amount of time and research points to spend to become a religious founder. This is a usual situation in Civilization 4 - to find what kind of research patch are the best for achieving your goals. In this case research of religious techs is usually connected with neglecting other advancements and can have serious impact on our chances of winning.

So, what are the advantages of becoming a religions founder?

There is one - a Holy City

The Holy City is a centre of particular religion and civilization which controls it has a major impact on the destiny of this particular religion - choose how and where spread the religion. However, what's more important, Holy City (after building a Shrine there) can generate huge amounts of Gold +1 for every (also foreign) city where religion is present, and guaranteed (if this particular faith is your state religion) a line of sight with all these cities.

Money income from religion is a really nice addition to your budget - and sometimes can make it possible to play the entire game on 100% science. The line of sight is also very useful - giving you the information about city garrison, level of advancement of particular civilizations and information about military forces' movements. 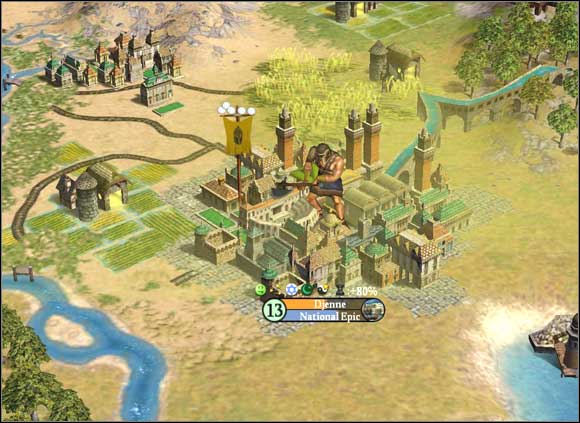 The most important effect of religion is how it impacts diplomacy. The more information about is in Diplomacy chapter, here I would like to write how to make your religion the most influential one.

First of all - you have to spread religion as far as you can. There're two ways of spreading - one is passive, when faith slowly spreads from city where it is known to other ones, connected with the previous with trade routes. As I said it is a very slow way (only way to quicken it is to build a Shrine). The second - active way of spreading is use of missionary. This unit can attempt to convert any city even if there's another religion present.

Only way of blocking this unit is to choose theocracy civic or to close border with civilization which sends a missionaries.

If you convert even one of the cities of another civilization there are chances that it can change religion on your faith. The more cities you converted - the change gets more probable. However, it isn't so easy as its look like. First of all, not only your civilization tries to spread religion, and AI will choose this religion which is more profitable (mainly in AI city development and in diplomacy). So, not only you need to make other civilization share your religion but also to make them keep it.

Is it possible to avoid the religion, don't have a Holy City, and don't choose a state religion? It is, but usually drawbacks are more serious than gains.

There is only one drawback - when we choose one religion, civilizations with other religious believes are become more hostile to us. This makes a religious choice strongly connected with diplomacy.