Holmes and Watson are talking about the murderer and testimonies made by witnesses. Despite the fact that they differ from each other, Sherlock believes that he can guess the presence of the killer. Now you need three dummies and three different men's clothing. Watson will deliver all of these items.

Go to the Watson's room and open the wardrobe. Take worker's disguise. The second costume take from the manikin standing nearby. Take the mannequin too. Exit the room.

Now take the cap. Go to the door leading to Holmes room (right of the fireplace) and the open wardrobe. Take the gray hat and the second mannequin.

Take the third mannequin from the Sherlock room (behind the door) and the worker's clothes. Try to find a deerstalker and a blond wigs too.

Now go to the chest lying on the bed. Open it and take wigs dark brown. Go to the other side of the bed and open the bedside. Take ginger wigs. 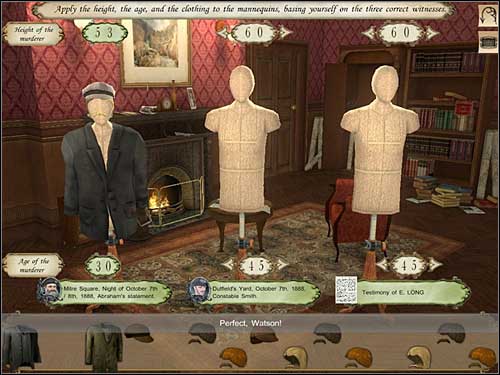 Now it is time to determine height, age and appearance of the murderer. According to that what Abraham said specify height (by clicking the left arrow above the mannequin head) of the first dummy (5.3 feet) and its age (30 years). Dress him with the gray jacket, blond wig and a gray cap. If you will do it in a right way, Holmes will say something. 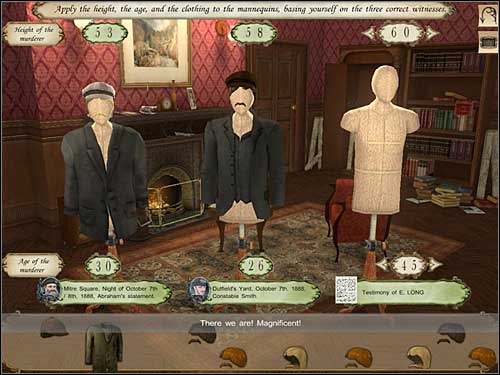 The second dummy (according to the constable) must have a gray jacket with a vest, brown wig and a brown hat. Set its height to 5.8 feet, and age to 26 years. Holmes will accept this but after a while he will change a height to 5.3 feet. 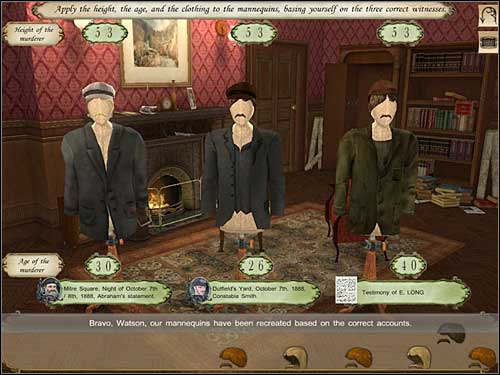 The third mannequin (according to testimony of E. Long) should wear a green suit, brown wig and a deerstalker. Set its height to 5.3 and the age to 40 years.