Holmes and Watson are going to Miter Square, the place where the second crime was done. Take a few steps to the left and pass a large chest. Go to the another one and you will find a lantern there. Use some matches on it. Watson will take it and, as a matter of fact, the whole are will be more visible.

Go left, to the dark corner of the street. Now, you are in the place when the second murder was done.

Click the magnifying glass on the body to zoom. The click on the head and try to find:

one cut on the throat; 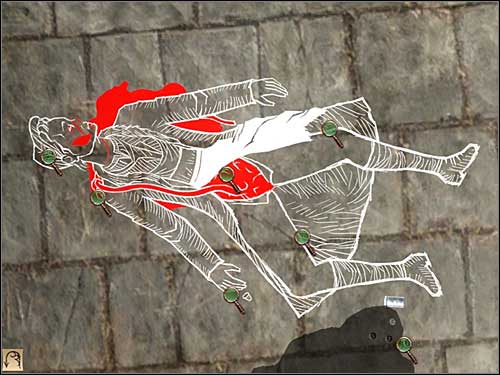 Cancel the zoom and make some further inspections: intestine on the right arm, open stomach, missing uterus and kidney, a piece of white apron and few other things.

Holmes will decide that they should check all 3 streets leading to the Miter Square. Go along the fence until you will reach the Church Passage, leading to Duke Street. Go to the end, to Duke Street. There Holmes will meet Abraham Solomonovitch, who will tell him what his cousin and his two friends saw.

After finishing the conversation go back to the Miter Square and go left. You will get to the next dark and narrow passage leading to the St. James Place. Then go left, pass a huge chest and go straight ahead until you will reach the exit of the street. Holmes will realize that from this direction constable Watkins came (he has found the body).

Now detective will decide that you have to complete the timetable that you have started at the Dutfield Yard. Open the appropriate board with well known icons and try to assign them to proper hours, 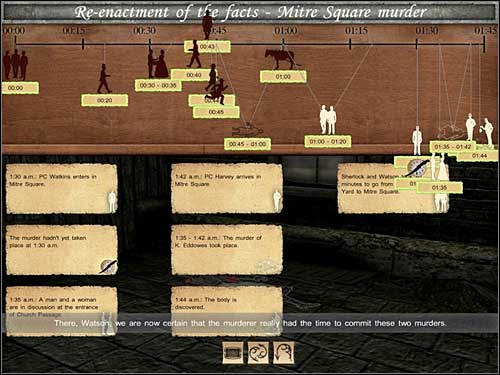 At this point, Holmes will ask Watson to play a role of the police officer to see when he was able to see the body. As a Watson return to the dark corner where the Katherine body was found. When you will get to Holmes, he will ask Watson to do the same thing again but this time with the light. The conclusion can be only one: he couldn't miss the victim so the murder was done later.

1.30 - The murder wasn't done yet (move the icon with crossed clock to this hour).

1.35 - A man and a woman are talking on the Church Passage (move the icon with man and woman to that ).

At this point, Holmes will ask Watson to act once again. This time he will be another police officer. And once again Watson will have to get to the place of the crime. Holmes will conclude that the constable may have not seen the lying body, but rather he should see standing murderer.

Now this is time to complete two deduction boards. 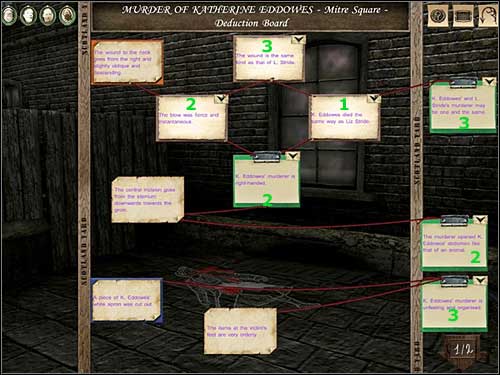 Evidence 1: The cut was rapid and brutal (version 2).

Evidence 2: The wound is very similar to the wound found on L. Stride (version 3).

Conclusion I: The murderer of K. Eddowes is right-handed (version 2).

Evidence 3: K. Eddowes was killed in the same way as L. Stride (version 1).

Conclusion II: The murderer of K. Eddowes and L. Stride is probably the same person (version 3).

Conclusion III: The murderer of K. Eddowes has cut her stomach in a very brutal way (version 2).

Conclusion IV: The murderer of K. Eddowes is brutal and disorganized (version 3). 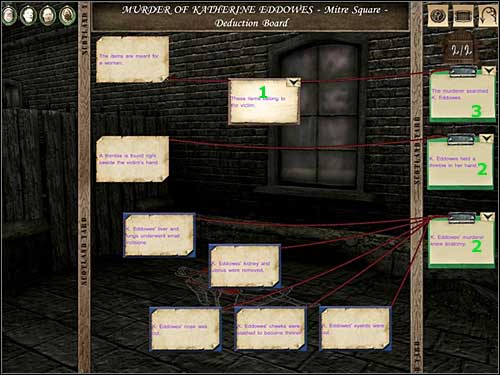 Evidence 1: These items belong to the victim (version1).

Conclusion I: The murderer of K. Eddowes has searched the body (version 3).

Conclusion II: K. Eddowes was holding a thimble in her hand (version 2).

Conclusion III: The murderer of K. Eddowes has got a very good knowledge of anatomy (version 2).