After leaving the pub go right towards the gate leading to the International Working Men's Club garden, where the murder of Liz Stride was made. Go inside. A timeline will automatically appear on the screen. It will be much simpler than the previous one because now you know the exact time of the every event (based on Watson's interview with police, conversation with barman and note on the murder of Liz Stride at Dunfield's Yard. All you have to do is to move symbols to the proper places on the timeline. 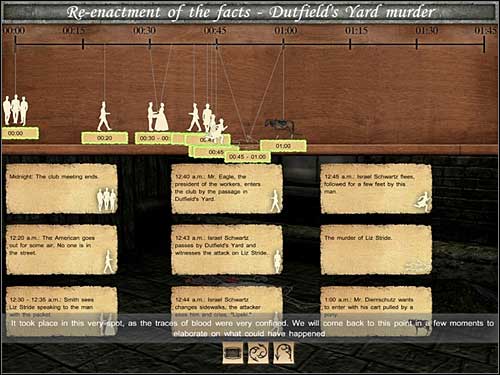 0.20 - the American goes out for some air. No one is in the street (move icon with one man to a proper hour).

0.40 - Mr. Eagle enters the club by the passage in Dunfield's Yard (icon with a man walking left).

0.43 - Schwartz changes sidewalks and sees the attacker (move icon with man to that hour).

0.44 - The attacker is yielding to his helper to scare Schwartz (move icon with escaping man to this hour).

0.45 - Schwartz is fleeing (move the icon with running man to this hour).

1.00 - Mr. Diemschutz wants to enter with his cart pulled by a pony (move icon with a horse to this hour).

After deploying all icons at the appropriate places (the frame will turn green), a new icon will appear - with the symbol of the body. Drag it to the time between 0.45 and 1.00.

Now it is time to examine the body, so click the magnifying glass near it to zoom. Look at these parts of the body:

right hand of the victim covered with blood (left side from the players point of view);

mud left of the victims head;

wound on the neck (one cut);

left hand holding some pills (right side from the players point of view).

Cancel the zoom and click PPM to open the Deduction Board. As always, move evidences drag to the center and remember to pay attention to the presence and color of the frames. Click on the arrows to open new options and select the correct answers. 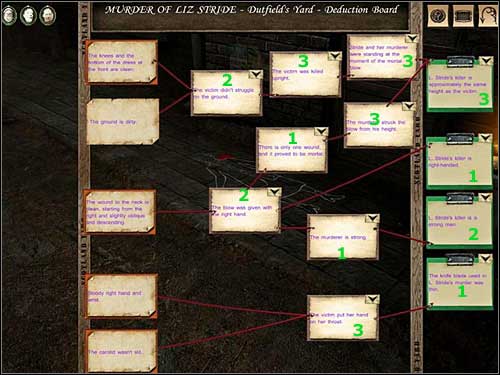 Evidence 1: The victim wasn't fighting on the ground (version 2).

Evidence 2: The victim was killed while standing (version 3).

Evidence 3: The victim and the attacker was standing during the crime (version 3).

Evidence 4: The final cut was made with the right hand (version 2).

Evidence 5: The is only one would, but a deadly one (version 1).

Evidence 6: The murderer stroke from his level (version 3).

Conclusion I: The murderer of L. Stride has the same high as his victim (version 3).

Conclusion II: The murderer of L. Stride is right-handed (version 1).

Evidence7: The murderer is strong (version 1).

Conclusion III: The murderer of L. Stride is strong (version 2).

Evidence 8: The victim has touched her throat with her hand (version 3).

When you will examine all evidences, Holmes will conclude that you are missing one, important thing - common to murders of Liz Stride and Annie Chapman. He will ask Watson about it. So look at the body once again and zoom the pills. This is the point - both women held something in their hands. They should drop it, if they wish to defend.