After the evaluation of all perfumes, Holmes is going to the brothel (use map). He will talk with Bella about the Big Danny and he will receive some valerian. He will learn that Squibby is at the police station and he is not going to leave the building.

Now Holmes has to go to the police station, but again he won't come into the building, but he will talk to the Big Danny. He will offer her a bottle of valerian "perfumes", but Danny wants a nice vial with atomizer. Simply install it on the bottle. This time, Danny is happy with the gift, and she immediately uses it. Detective will learn that only one policeman is at the police station at the moment.

To scare policeman out of the building, Holmes will have to go to the zoo shop, where he will learn that Hardiman is offering cat food. And indeed - just after leaving the shop go towards the main street and there you will see a vendor on the opposite side of the street. He will be shouting: "beep, beep." Holmes will all kebabs from him. Then tell your informers to lure as many cats as possible. Boys will release those kittens on Big Danny and as a matter of fact, policeman will run out from the police station. Holmes will take his chance and he will go to the building.

Inside go the door that leads to the cells (left of the desk). Try to open it, but you will find that there is a nail inside the lock. 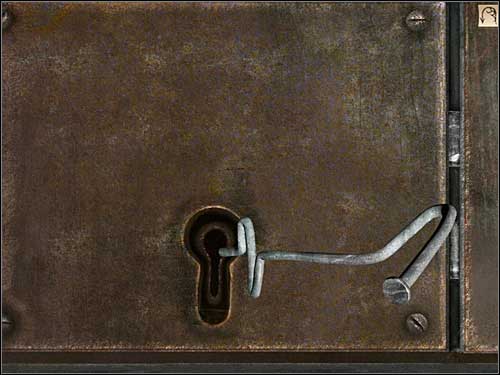 You have to move the nail: to the right. 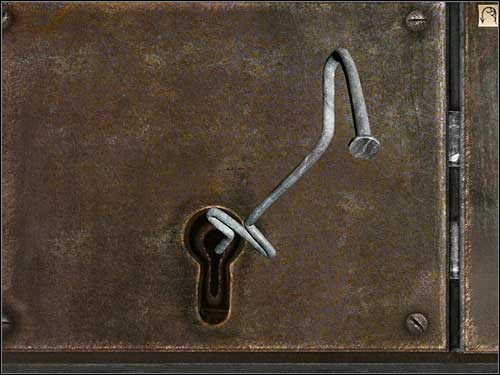 Return to starting position and then try to move it to the right. 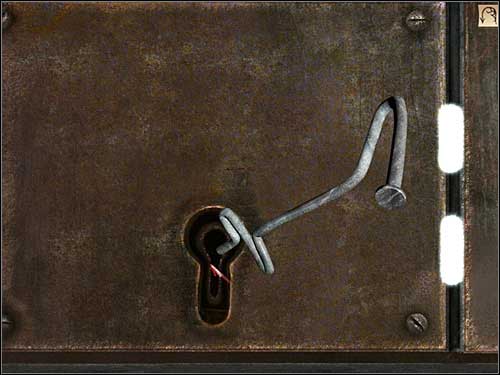 Move it down (and right).

Go into the room. You will find Squibby in the first cell. Holmes will learn that journalist named Tom Bulling is responsible for this that he is arrested now. He had attacked the writer and in revenge Bulling has accused Squibby that he is the prostitute murderer. Now, everyone in the town want to kill him. The journalist is threatening that he will describe the whole story in the press and that's why the Squibby want to stay in the cell now. If Holmes will speak with the journalist then Squibby will tell him some interesting things about Tumblety. Leave the station but first leave the Bluto's treasure at the policeman desk.

Go to the pub now (use map) where Sherlock will automatically notice that it will be good to wear some normal clothes now (so Bluto couldn't recognize you). So, looking, as the classic Sherlock Holmes, go to the pub and talk about Bulling with the waitress. Girl will tell you that she has soiled his book and has thrown it away. Of course take it, it is a journal (documents - Journal - Spring Heeled Jack). Ask the bartender about the journalist, but he won't tell you too much. Go to the Baker Street.