As a Watson go to the desk on the left (where Holmes is usually doing his research) and look at the remains of the green jar taken from the stairs. Watson will ask about the smell. Sherlock, will tell him that it is a formalin. Now you get some more information, so use the map and go to the Whitechapel.

At the beginning go to the shoemaker Solomonovitch (Map - Cobbler). Go to the table on the left and speak with Isaac. You will learn that Pizer has gone to the police station and now he is free (Documents - Daily News). You'll get Harness for Prothesis too.

Now go to the clinic (use map) and give the harness to Dr. Gibbons (click the harness icon in the inventory equipment and then click on Gibbons). In return you will receive a Cane. Talk to him about the formalin (he don't have it now) and show him the pill found near the Annie's corpse. You will learn that the girl received these pills from him because of the tuberculosis. They have nothing to do with the murder.

Now go to the brothel (Map - brothel). Give the staff to Bella Poolman and she will tell you some interesting things about Dr. Tumblety. He is Canadian or American, he hates women (maybe he is homosexual) and he visits Wasp Nest 's Pub on Berner Street (the new location on the map). Bella will explain Watson the differences in the prostitutes hierarchy. For example Black Annie and Lucy was the least important in this job. After the conversation go to that pub (light blue door).

When you will be inside talk to the journalist Tom Bulling. Someone has stolen his red ink and until he won't get it back - he doesn't want to pay or leave. Speak with the painter too. You will learn some interesting things about Dr Tumblety. For example: he's doing something behind the closed doors in the nearby room. Try to go there - barman will stop you. But you are close enough to the red ink so simply steal it.

Of course give it to the journalists. Speak with the barman about the doctor and the mysterious room. You will find what you have to say to get inside. With this knowledge, go there but unfortunately Bluto doesn't like the strangers and he will decide not to let you in. In addition, he is expecting some workers.

It is time to visit Finley (use map) and ask couple of questions about the strange tenant. He will give you an exact description of the doctor: high, older than 50 years and he is wearing an American hat). Watson notice a smell of gas in the air.

No you have to go to the police station (use map). Talk to the constable (tell him the description of the doctor). Then speak with Richardson. He has a problem, because two witnesses told him the different hour when the crime could occur. As a matter of fact his colleague has destroyed the report. 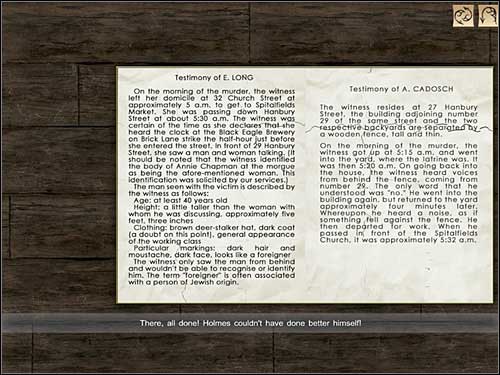 The pieces of this report are near the bin (on the left of the desk). Take them. Now you have to restore the document. With LPM you can move the scraps to the window in the center of the screen. With PPM you can rotate the scraps. I recommend to start with the corners and edges. You have to reconstruct two documents: Testimony of E. Long and Testimony of A. Cadosch. As a result they will appear in the inventory along with one more document: old police report concerning certain arrests.

Now it is time to go home. Click on the map to move to the Baker Street.