This page of the Sherlock Holmes: Chapter One guide contains a walkthrough of The Muse From Abroad story case. We described the steps you have to do in the refugee camp. Your task will be to investigate the crime scene. For completing the quest, you will get an achievement called "Voice of the People". 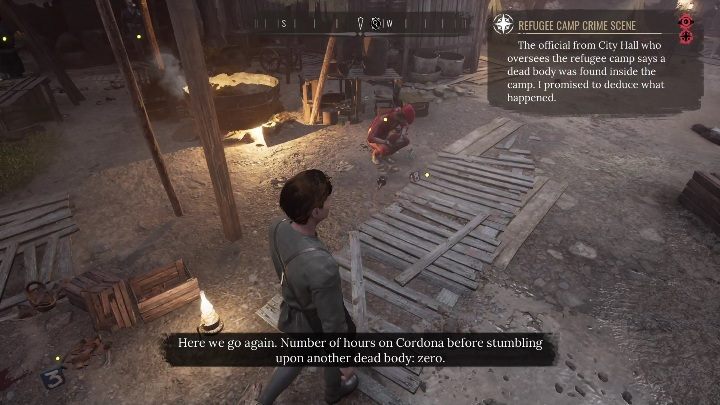 Once you get into the refugee camp, you need to examine the evidence in the case. Most of them were marked by the police, making your task much easier. Next to the number 8, Jon is hanging around, clearly interested in this point. This is where you have to examine the boards and the footprints. 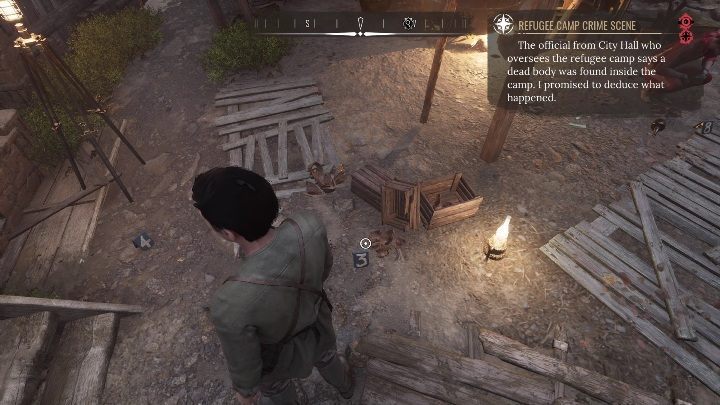 By the number 3, examine the cracked boards and the bloodstain on the ground. 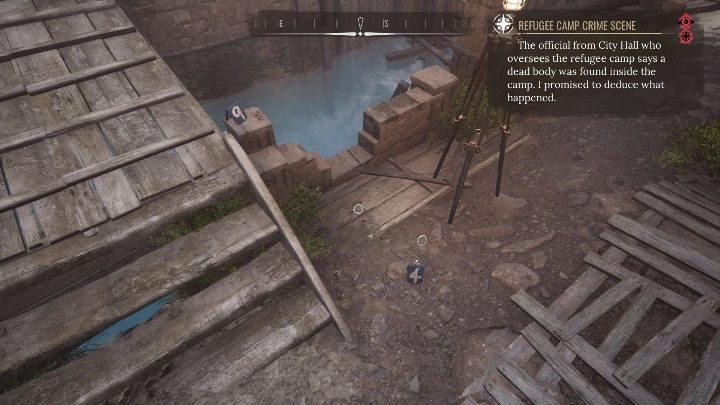 Number 4 is placed next to the bootprints of two people who fought each other. 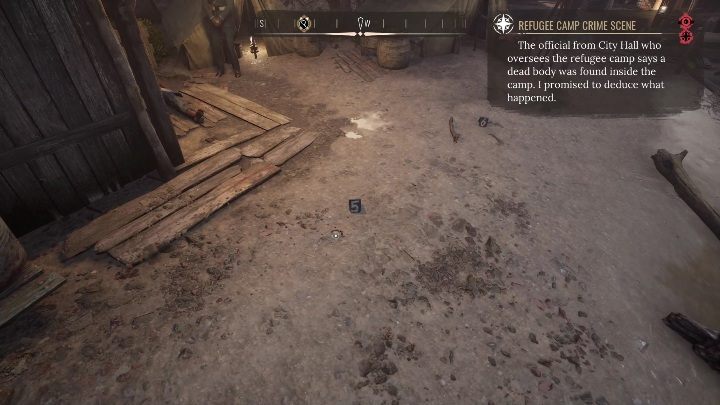 By the number 5, you will find female beads ripped by being pulled. 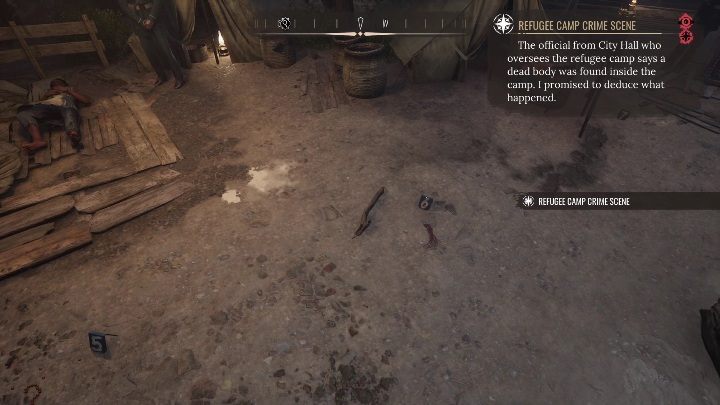 Number 6 these are more boot prints and a wooden stick that could be used to defend/attack someone.

You will find number 7 at the very end of the camp, right next to a police officer who will not let you pass any further. These are more bootprints. 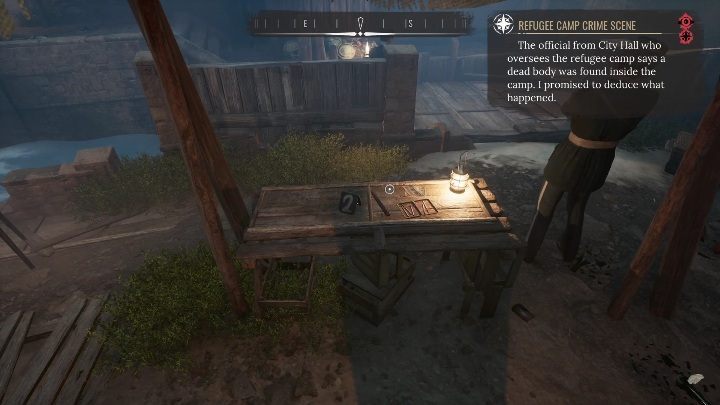 Number 2 it's a countertop with a few items you need to examine: 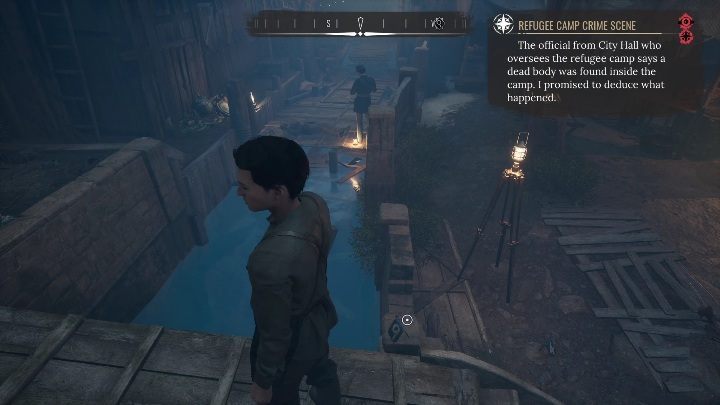 Number 9 it on a small bridge leading to the camp. It's a bloody handprint. 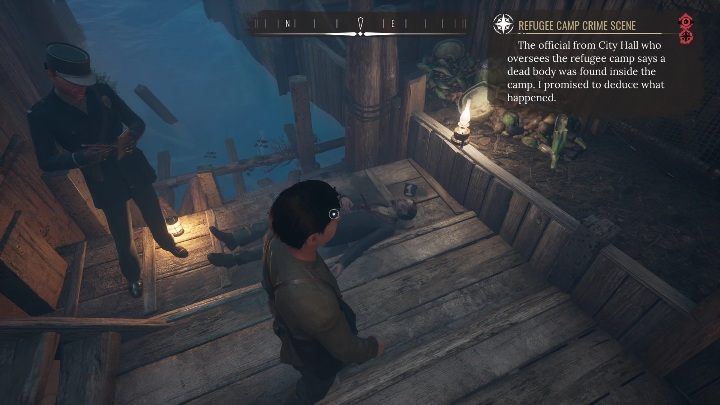 The last thing you need to examine is the most important evidence in this case. The man's body. Inspect the following: 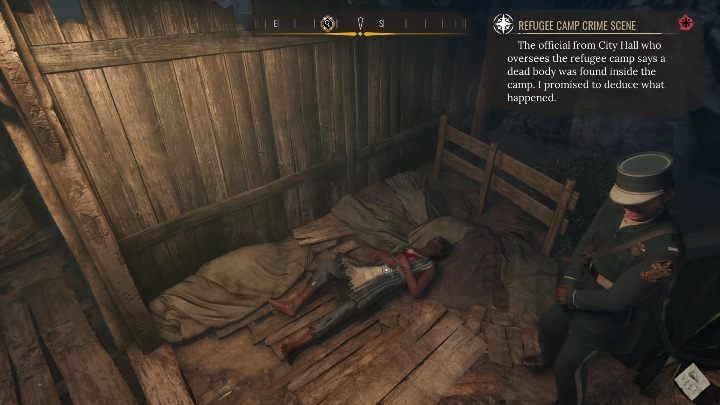 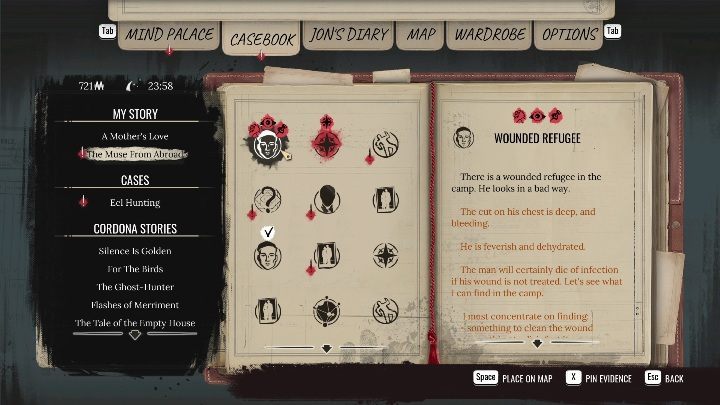 You'll find a wounded man behind one of the buildings. There's a police officer standing next to him, but he's completely uninterested in his pain. Sometimes Jon shows up in this area, and he can call you. After talking to a man, you can help him, and to do it, you have to first choose the appropriate task in the case book. 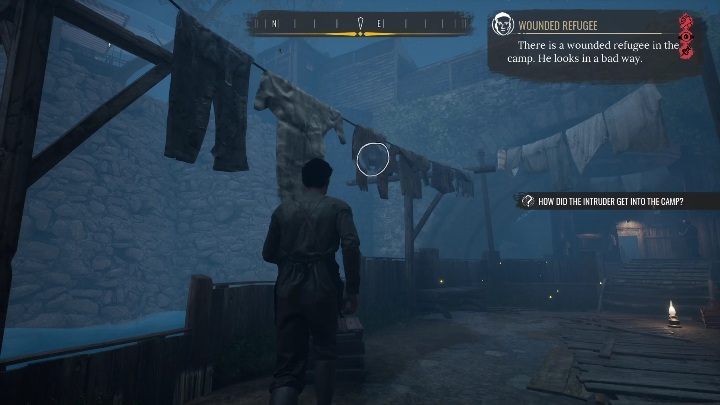 To help a man, you need 3 items. Start with clean cloth. Some clothes are hanging on a rope right by the river. 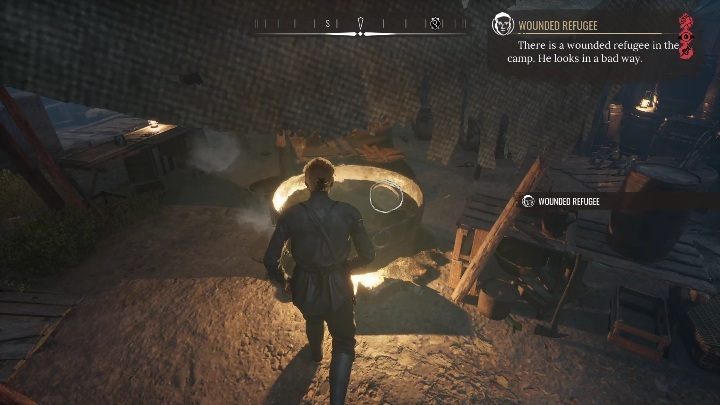 The next thing you need to find is clean, hot water. You'll get it from the pot on a bonfire. 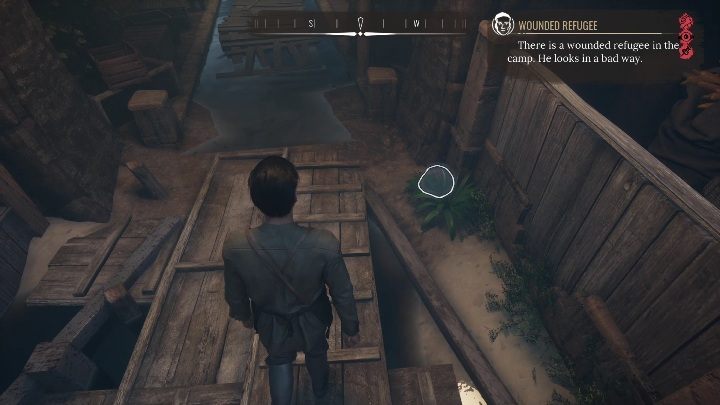 The last important thing is aloe that grows by the river. You'll find it near the place where the man's corpse is. 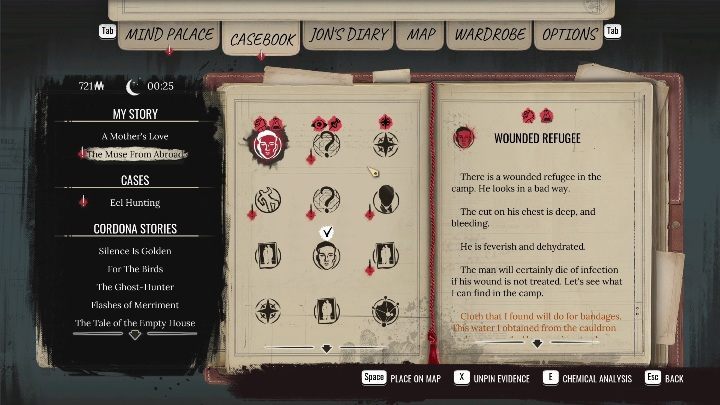 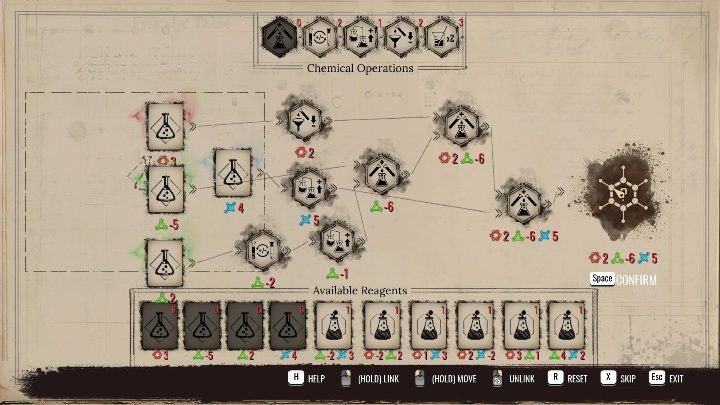 After collecting all the ingredients, you have to perform a chemical analysis. The difficulty of the task depends on the chosen game's difficulty level. The correct solution is shown in the screenshot above. 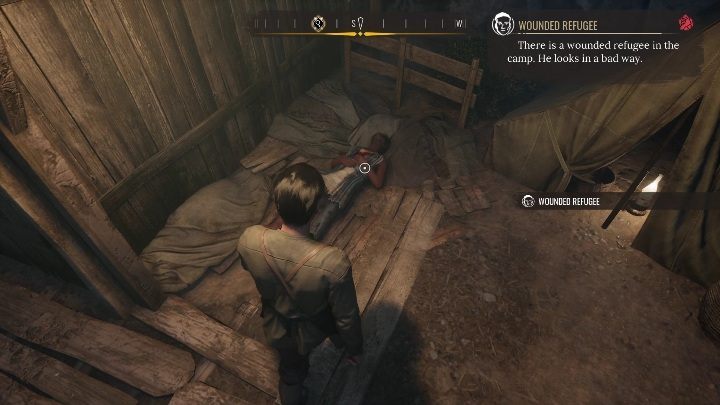 To help a man, you need to come back to him and put a bandage on him. That way, you can be sure that the wounded man will survive. You have to complete this task if you want to obtain the Voice of the People achievement. 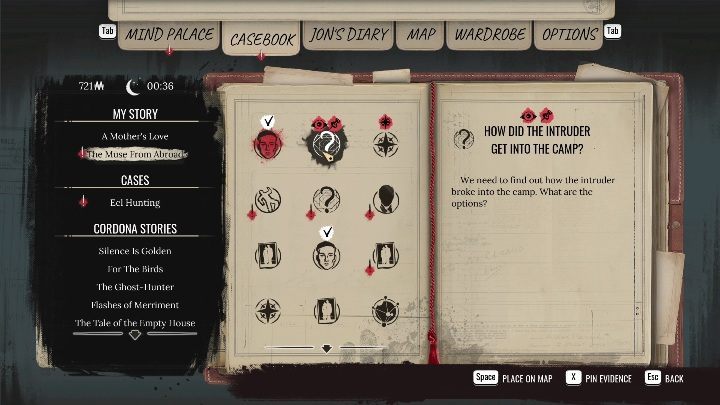 Time to look at the evidence the police missed. Start by marking the task in the case book - that way, you will be able to see other important clues in the camp. 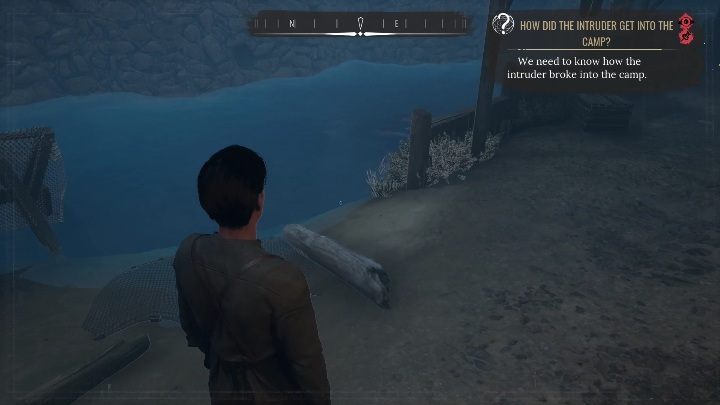 In Concentration mode, you can explore the river bank in the camp. You'll see fresh marks there, most likely left by the boat. 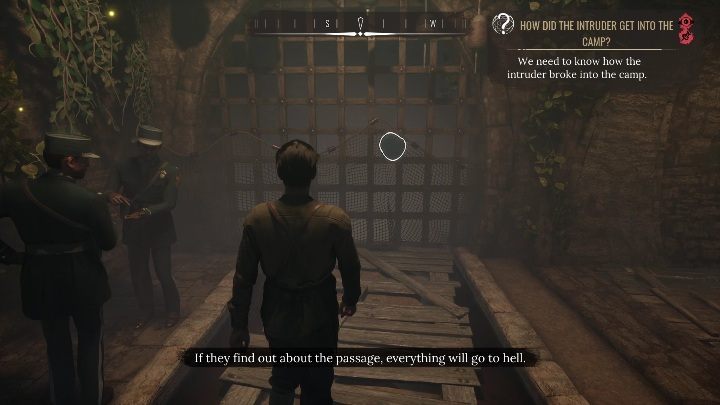 The next thing you need to look at is the bars next to the police officers. Note that these are only visible in Concentration mode. 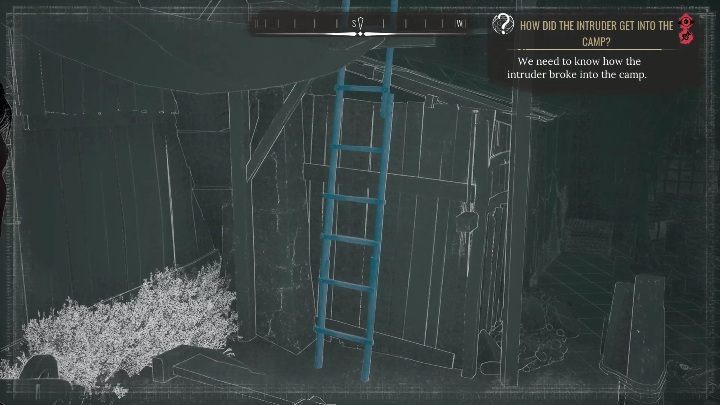 Go towards the exit of the camp. We assure you that this won't cause the task to fail or remove your progress. You need to check the ladder that stands in front of the wooden footbridge. 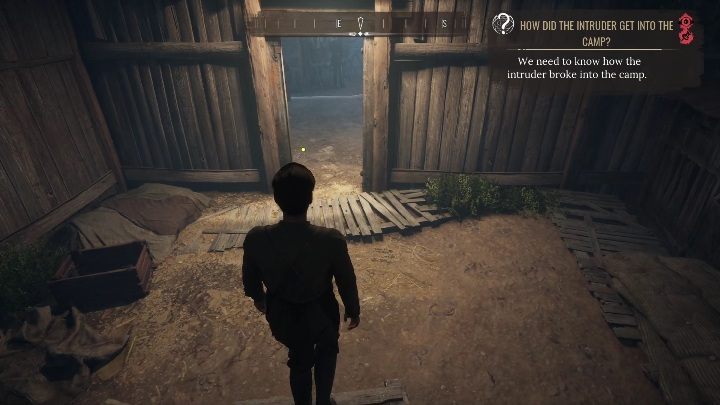 The last thing to check is the prints at the camp's entrance. Next to them is the detective you've spoken to earlier. 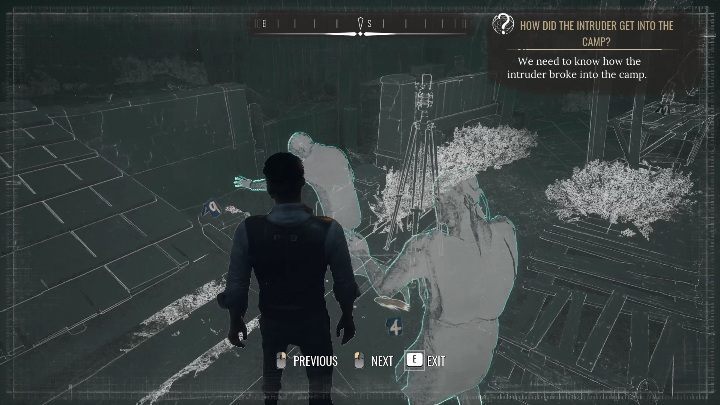 After checking all the evidence in the area, you should carry out a reconstruction of the events. Start with the first scene, right by the wooden footbridge. It is necessary to choose two men - one of them falls straight into the river. 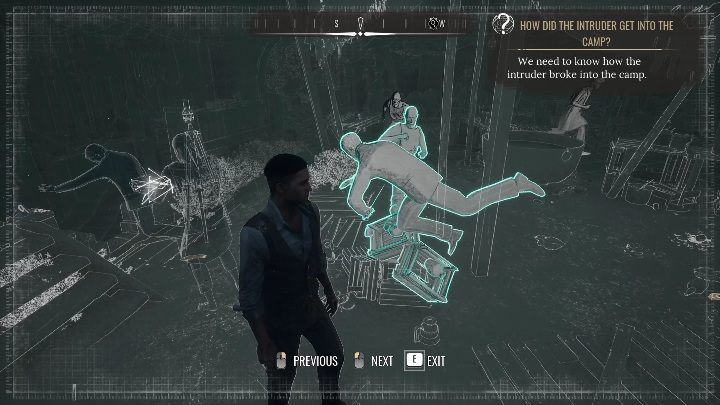 Let's move on. In this place, there should be two men. One of them falls on the boxes. 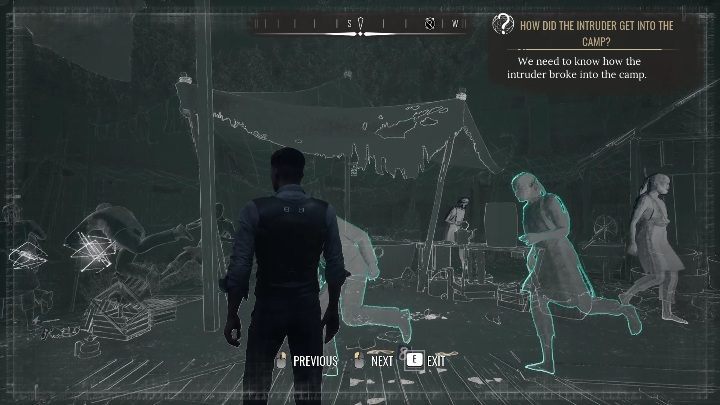 The next scene should be men running after each other. The one with the beard and the long hair should be in the back. 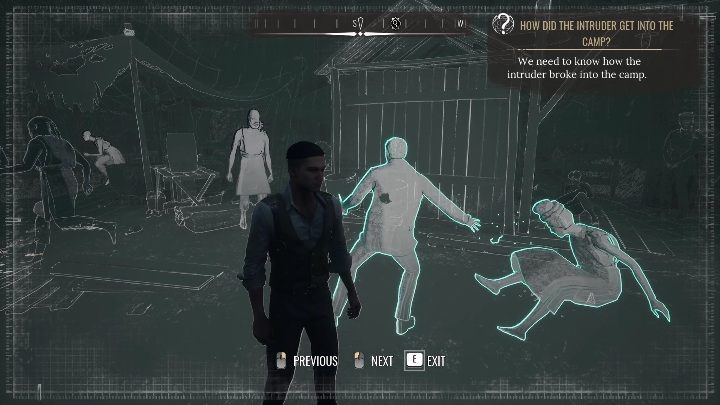 Next to the wooden building, place two figures: a woman who falls on the ground and a man holding a dagger in his left hand and beads in his right hand. 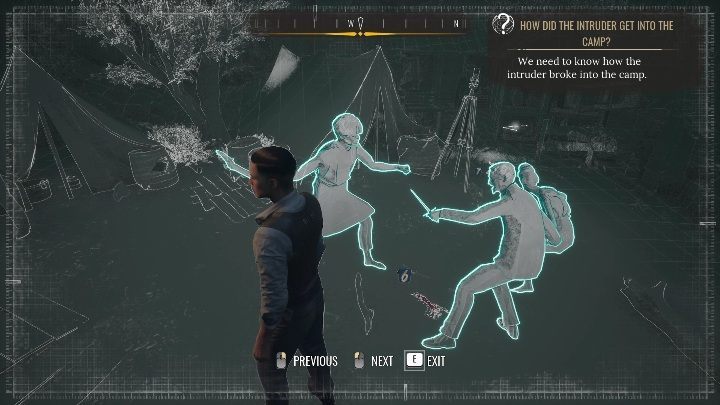 The next scene should include 3 people. A man with a blade pulls a woman's arm, and the other gentlemen try to stop him. 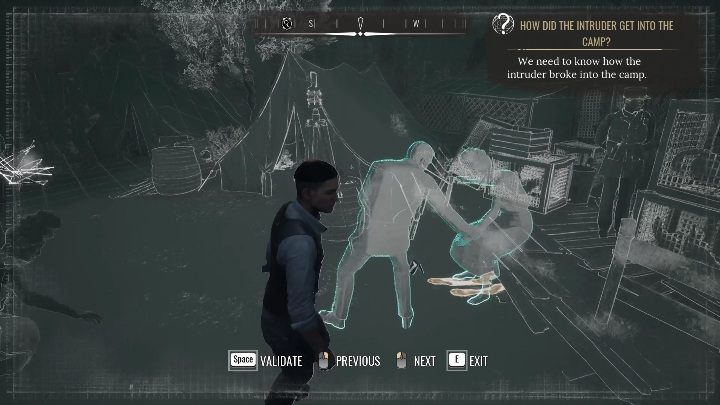 The last scene should include a struggling woman and a man who forcibly pulls her out of the house. After that, confirm the whole reconstruction, and you'll see what happened at the camp. 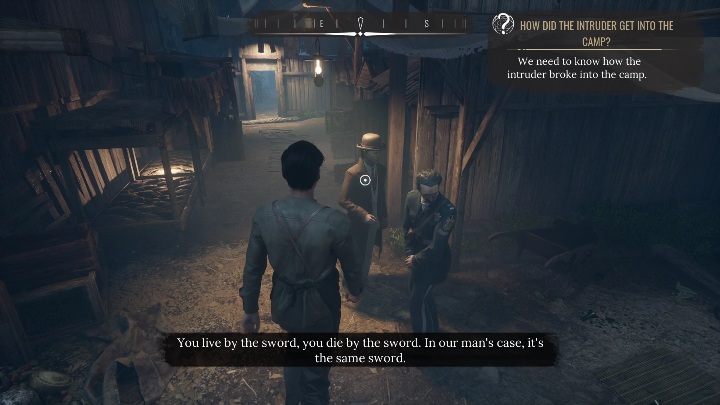 After checking everything, go to the police officer and detective. Inform them of your observations and suspicions.