In this section of the guide to Sekiro: Shadows Die Twice, we have compiled the most important information about character development. You can learn, among other things, how to increase the life expectancy and attack power of a controlled character or how to access new skills. 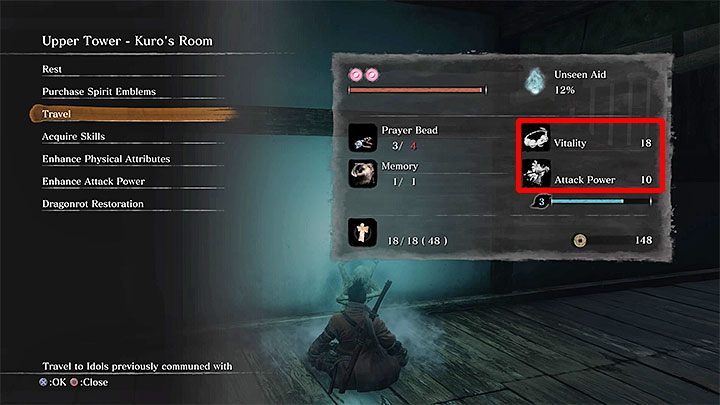 In Sekiro, the main character is described by three parameters - Vitality, Posture and Attack Power. A very important feature of the game is that you increasing the statistics of the hero by grinding, i.e. by repeatedly cracking down on the same monsters, is not easily achievable. Instead, you should rely on the methods described below. 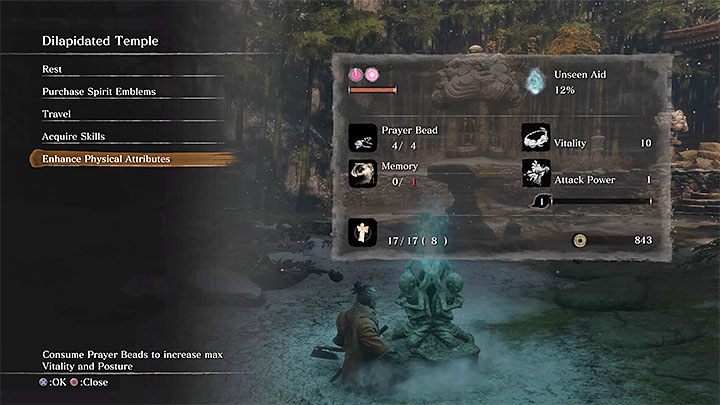 Vital force and Posture can be increased only by purchasing Prayer Beads. They can be rewarded for defeating selected bosses, although some of them are found in the game world in the form of loot. A full list of the Prayer Beads (there are 40) is readily accessible in a separate chapter of our guide.

Hero stats don't automatically increase when you discover each new Bead. Instead, you need to wait until you collect 4 Beads and then go back to any Sculptor's Idol. In the camp menu, you can select the option to Enhance Physical Attributes. 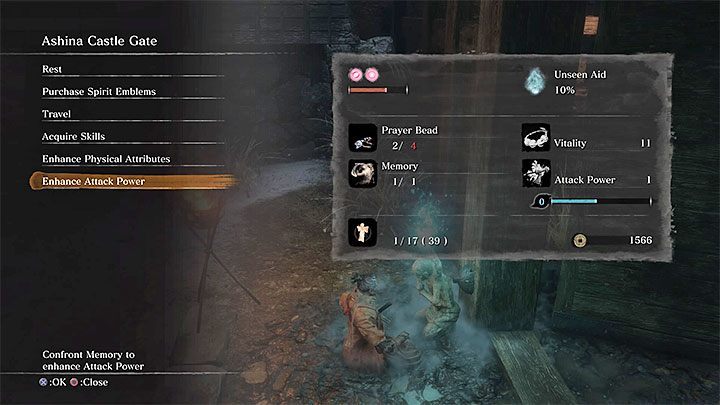 Attack power can be increased only by obtaining new Memories. These are rewards for overcoming the main bosses of the game. After killing the boss, you will receive information about unlocking the associated memories.

Attack Power does not automatically increase when a new memory is unlocked. You have to go back to any Sculptor's Idol, and then select the option in the camp menu to Enhance Attack Power by 1 point. 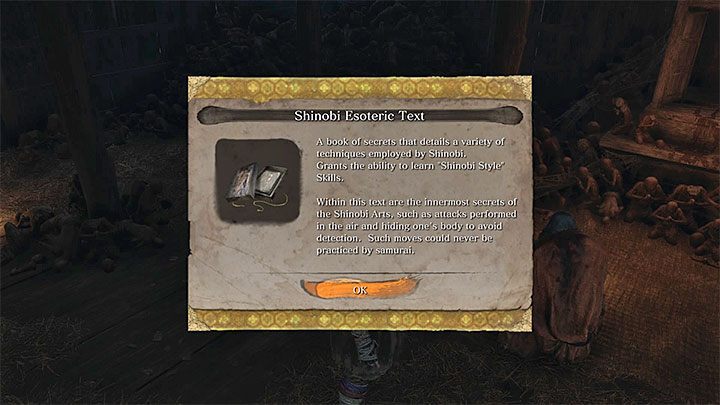 Another way to increase the effectiveness of the hero on the battlefield is the acquisition of new skills. Before you can start unlocking skills, you need to meet two requirements.

The first requirement is to have an Esoteric Text, i.e. a skill book. The Book of Shinobi Arts and the Book of Prosthetic Arts will be given to you at the initial stage of the game by the sculptor. The remaining books you have to obtain yourself. A list of books, along with their locations, has been included in the chapter Esoteric Texts. 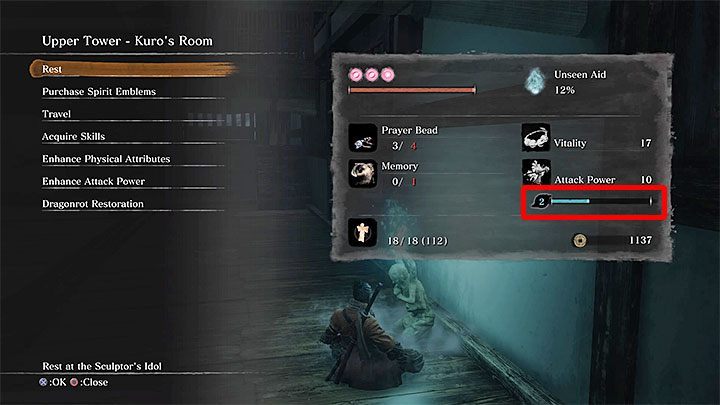 The second requirement is to have some skill points available - they're awarded for advancing to new levels. XP is awarded for each enemy killed, with more points guaranteed by defeating bosses. We recommend that you check the section Farming XP and Gold, where we break down the best methods of accumulation of experience.

A Hero can lose XP at the moment of death. You may lose half of the collected experience needed to advance to the next level. You don't need to be afraid of losing already unlocked development points. This topic was discussed in more detail in section Death and its Consequences. 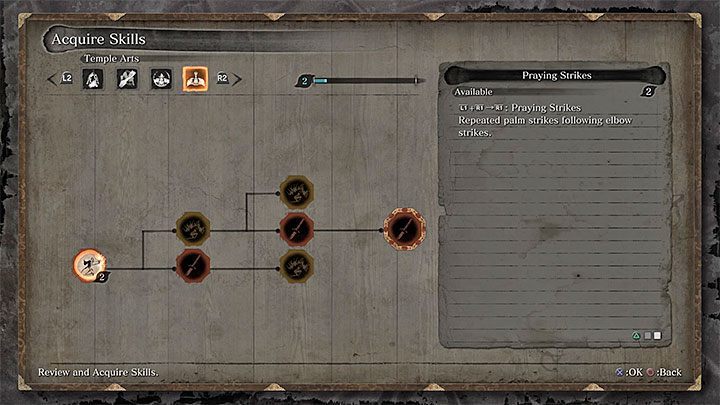 Once you earn at least 1 development point, you can select the category of skills you're interested in from the tabs in the upper left corner of the screen. Most skills require spending more than 1 ability point. They are also linked to one another in trees, and so in order to unlock more advanced abilities, you must first purchase corresponding basic skills.

{ramakniebieska}Our suggestions of the most useful abilities can be found in the section What Skills Should I Buy First? Don't try to unlock all skills from just one tree. Instead, try to achieve the best skills from different categories. {/ramkaniebieska} 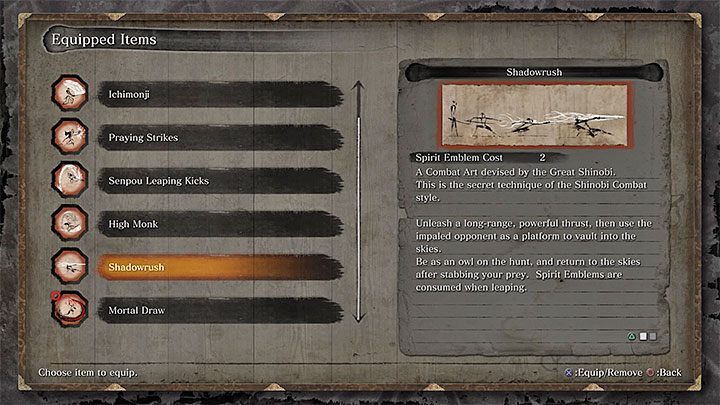 As you progress through the game, you can access new Combat Arts. These are special abilities activated by the following combination of buttons: L1+R1/LB+RB. Each activation of Combat Arts consumes Spirit Emblems (usually 2 or 3).

Almost all martial arts you can be unlocked with the acquisition of skills related to them. The exception here is the Mortal Draw Art, which is granted when you receive the Blade of Mortality.

You can only have one Combat Art active at a time - set it in the main character tab. You may want to switch between the available abilities. This is highly advisable as some normal opponents and bosses are less resistant to the chosen Combat Arts. Our suggestions regarding the selection of abilities can be found in the guide to the battles with the game's bosses. 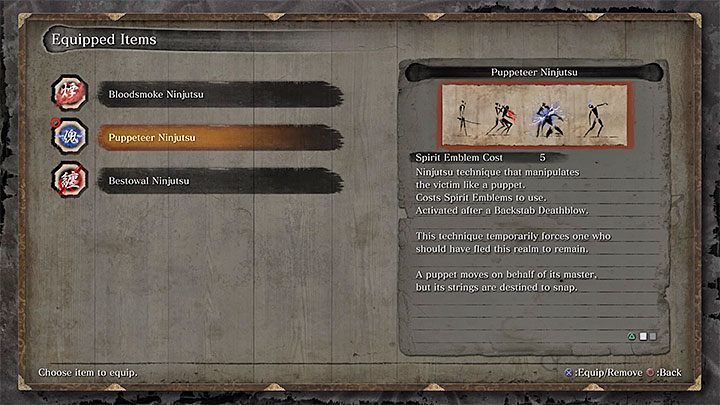 In Sekiro, you can unlock only three Ninjutsu Techniques. Here's a list of these:

As with the martial arts described above, at any given moment, you can only have one ninjutsu technique ready to use. You select them from the character card. Always carefully read the technique descriptions to learn how to apply it. It is worth noting that they consume much more Spirit Emblems. Use them in moderately. 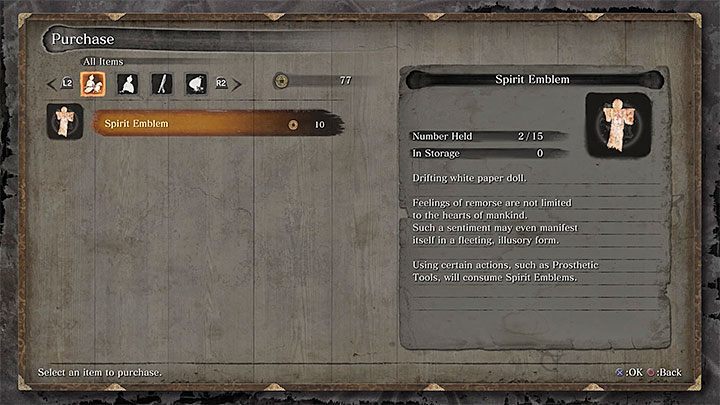 The Spirit Emblems - are a very important resource in Sekiro, allowing you to use:

The pool of Spirit Emblems can be replenished by:

Try to always have a large number of Spirit Emblem in stock, as you can very easily use them up, for example, repeating a battle with a strong boss. The hero can access only a limited number of Spirit, but: