True Corrupted Monk is one of the bosses found in Fountainhead Palace in Sekiro: Shadows Die Twice. On this page, you can find a great strategy that will help you survive 2/3 of the fight. Also, you will learn how to win the third part of the fight with the Monk.

How to unlock the fight with True Corrupted Monk? 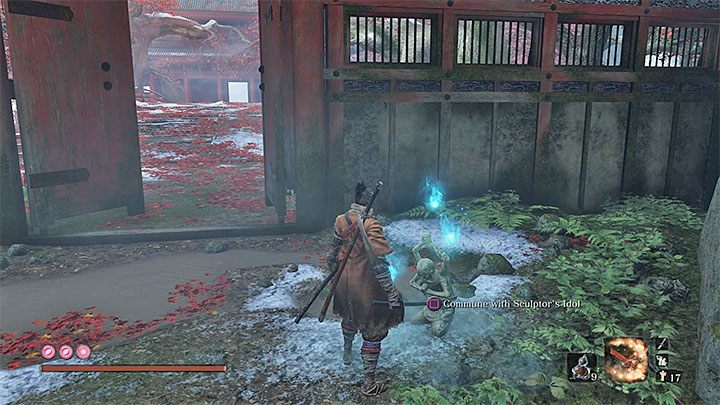 Rewards: Memory: True Monk, Dragon's Tally Board - this artifact allows you to purchase more items from the merchants.

The boss guards a large bridge. A Sculptor's Idol is located in front of it. We don't recommend going straight to the boss. It is better to start the fight with a stealth attack - you will be able to deal one or (preferably) two Deathblows. This will shorten the fight significantly.

Preforming the first and the second Deathblow 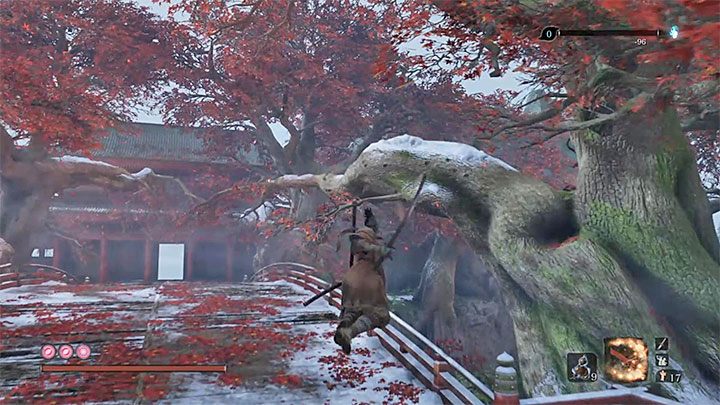 Start using the grappling hook right after you move closer to the bridge. Keep moving from one hook point to another (the ones located on the trees on the right). 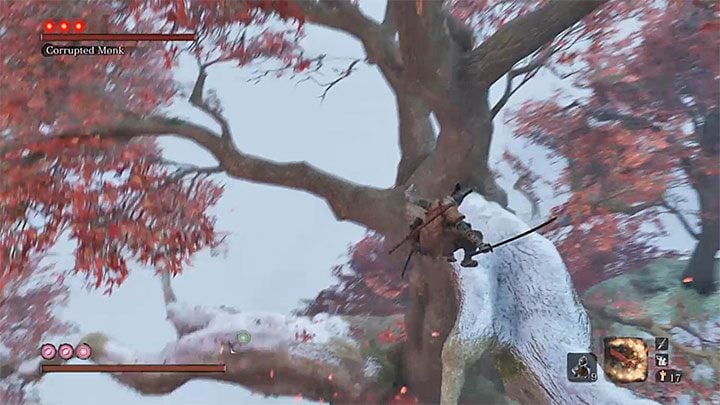 The last thing you have to do is to move to the highest hook point located on the left. 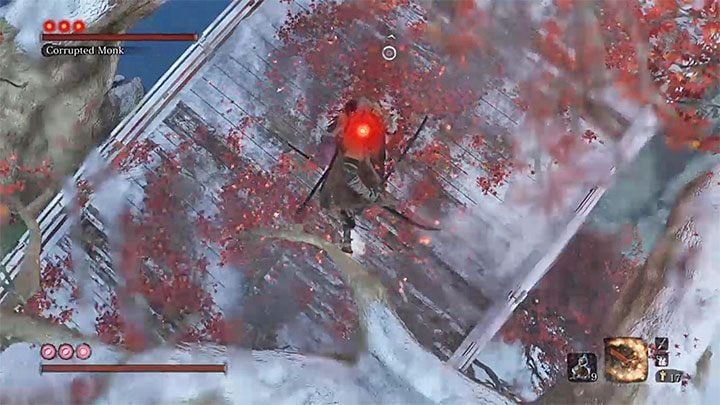 Turn around to face the boss - she is standing below you. Wait for the True Corrupted Monk to make a single stomp. Jump towards her. The red dot should appear while you are still in the air - this is your chance to perform the first Deathblow. 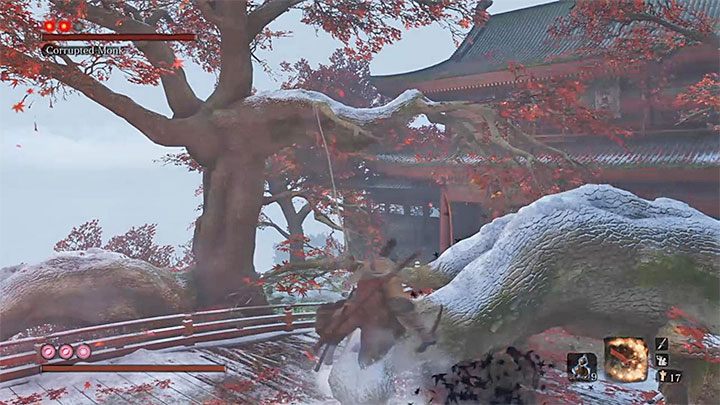 After that, quickly use the grappling hook on the nearest hook point. Go back to the highest branch, the same one you have jumped down. 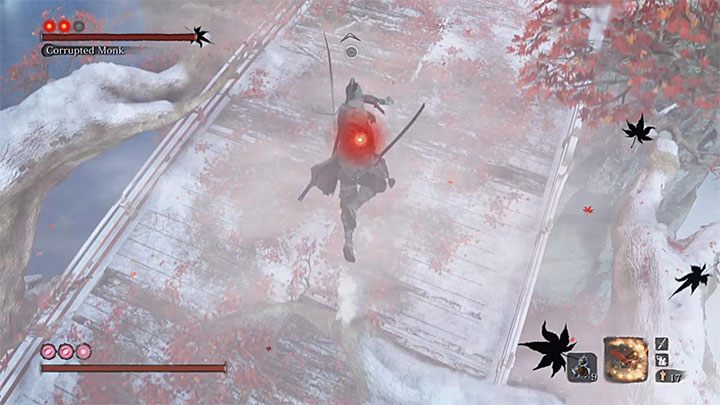 Face the partially invisible Monk. Lock the camera on her and jump towards the boss. Perform the second Deathblow.

It is easy to make a mistake here and let the boss see you or to jump down at the wrong time (too early or too late). If you failed to perform any of the two Deathblows, jump off the bridge. Keep repeating this strategy until you manage to deplete 2/3 of the Monk's health. 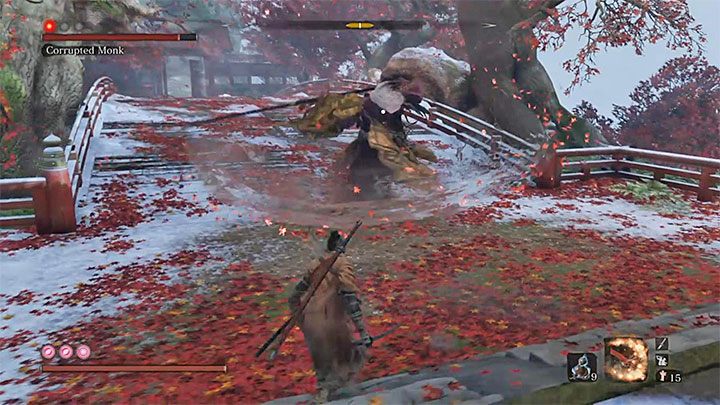 The third, and last, phase of the fight with the True Corrupted Monk is a typical duel. We recommend defeating the boss by depleting her health bar.

True Corrupted Monk has similar moves to her spirit version encountered in Ashina Depths. She fights using a large blade with great reach. Her basic attacks are usually a series of attacks (up to five slashes) that can be combined with sudden dashes towards Wolf. It is possible to deflect these attacks but you should be careful because the True Corrupted Monk also uses unblockable attacks (marked with the red symbol). 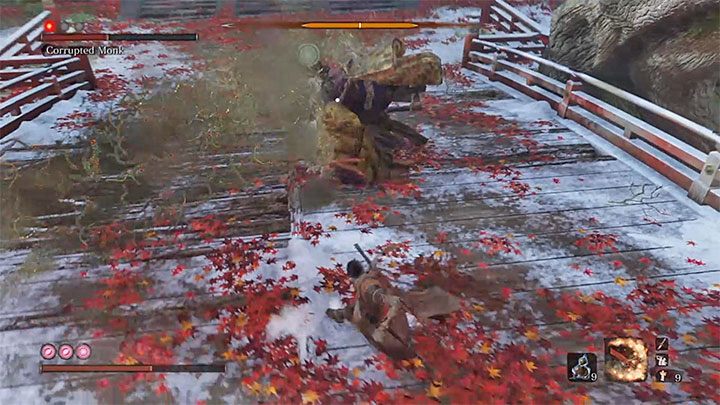 The True Corrupted Monk can also spit poison sporadically. This attack is extremely dangerous because it fills up a negative status bar. When it gets full, you will die automatically. Move back if you notice that the boss is preparing for this attack or when you are about to get hit by it. Use the grappling hook to avoid her attacks. 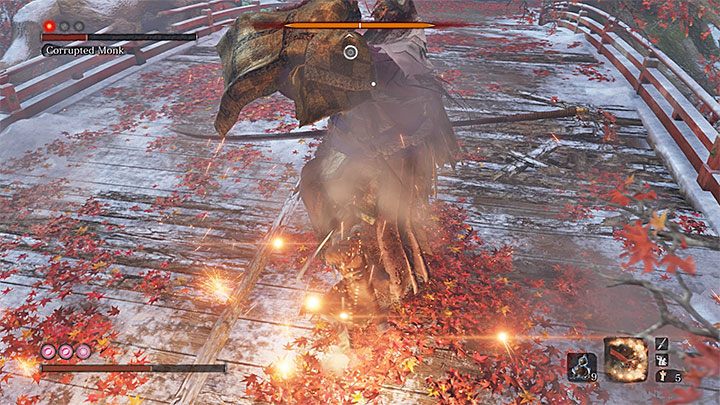 Luckily, there is a simple strategy that will allow you to defeat the True Corrupted Monk. Use Shinobi Firecracker after the Monk's every attack and when she is preparing for another strike.

The Shinobi Firecracker's undeniable advantage is that it forces the boss to stop attacking for a brief moment. This gives you an opportunity to deal 4-5 regular attacks. If you want to shorten the fight, eat Ako's Sugar to give Wolf a strength boost.

Your Spirit Emblem supplies should last for the entire fight. If you run out of them, attack the Monk after, e.g. she performs a series of five spin attacks. Run a lot on the bridge in between the attacks but watch out, you don't want to fall off the bridge.