This page of our guide for Sekiro: Shadows Die Twice describes two more encounters with the Great Serpent that take place in this phase of main campaign (the first confrontation took place in Ashina Outskirts). Completion of the third meeting with the great white snake will allow the hero to finally deal with the monster, and it is rewarded with achievement.

The encounters described below have to be played in exactly the same sequence. If you get to the "lair" of the snake in the Senpou Temple, you just will not find it, and killing the beast is impossible at this moment.

The second encounter with the Great Serpent (Sunken Valley) 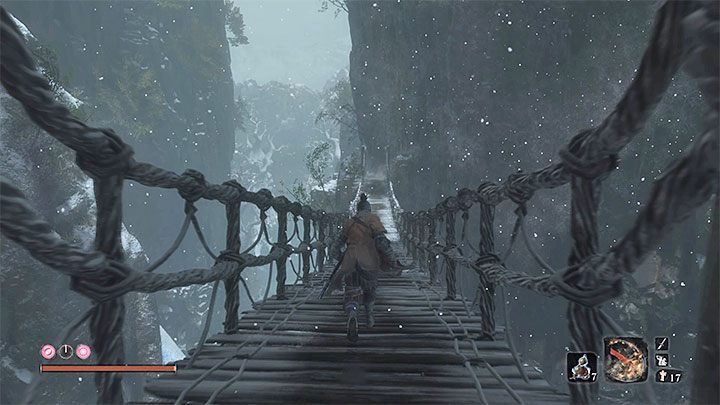 The second encounter with the Great Snake takes place in the Sunken Valley. It is shorter than the previous one and much easier to survive, although you can still die quickly if you do not adequately respond to snake attacks. The attacks start immediately after using key to open the doors of Gun Fort, which had a mini-boss, Long-arm Centipede Giraffe.

Get to (shown on the picture) movable bridge in the Sunken Valley Passage. When you try to cross the bridge there a Great Snake appears. To avoid death, quickly lean back and let the snake destroy the drawbridge. 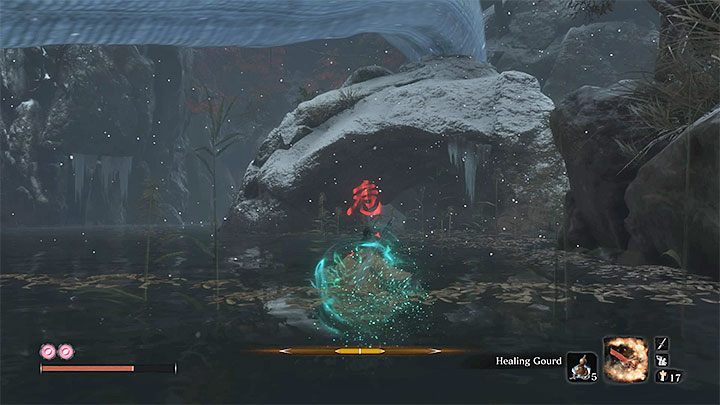 Jump into the water tank and move to the right. Along the way you will be attacked again by the Great Serpent - perform dodges every time a red symbol appears on the screen.

You need to get to the shelter shown in the image under the rocks. 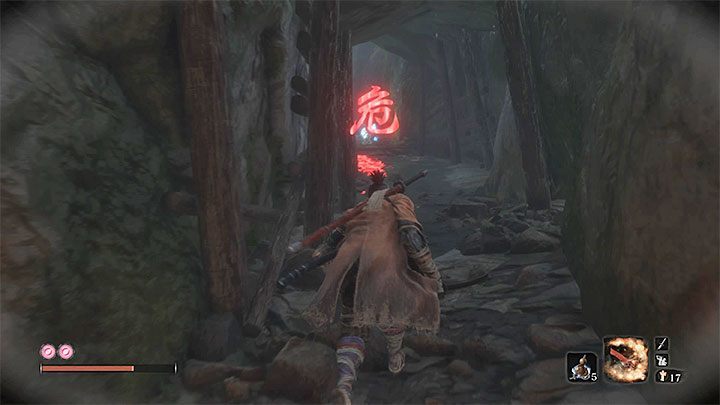 Once the snake temporarily loses interest in the hero you can start crawling in stealth. Go through the tall grass and quickly get to the entrance of a new cave, where the sculptor idol Riven Cave is located. The snake will try to attack for the last time, but it cannot squeeze through the cave. It will no longer appear in the process of further exploration of the sunken valley. 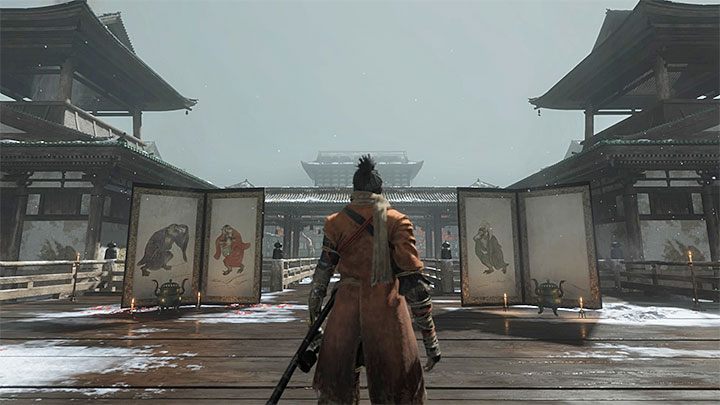 The third and finally last meeting with the Great Serpent is forced - it's not started by a snake attack. Only the hero will get it to lead to the final massacre with the giant monster.

You can not immediately get to the third confrontation with the Great Serpent, because in addition to avoid meeting him in Sunken Valley there is another important requirement - you must have the Puppeteer Ninjutsu ability. This ability is awarded for going into illusion in the Senpou Temple and defeating Folding Screen Monkeys. We have described it in detail on the page - How to find and kill Folding Screen Monkeys?. 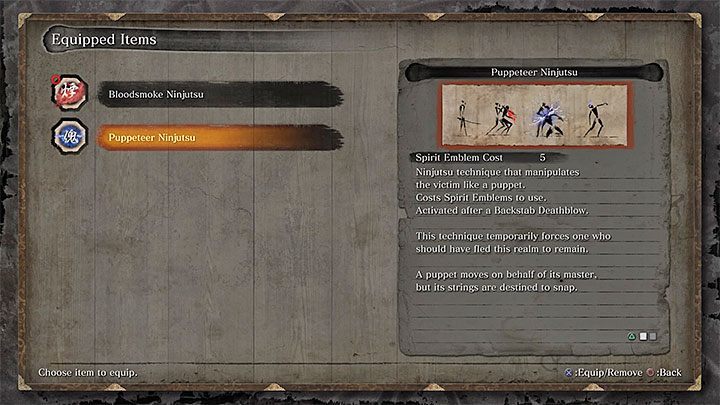 Once you unlock the above skill, set it as active in the ninjutsu techniques tab. Also, make sure you have at least 5 Spirit Emblems, because that's the number of these items you need to activate your ninjutsu puppeteer skills. 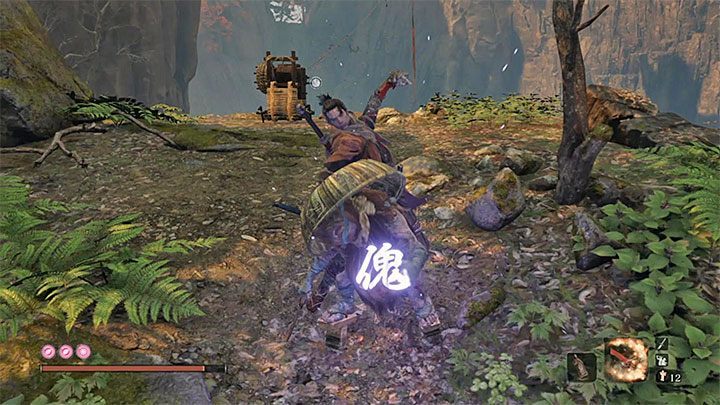 Start with the first sculptor idol in Senpou Temple - Senpou Temple, Congo mountain (Senpou Temple - Mt. Congo.) When you exit the building, slightly turn right and jump to the lower shelves. Make your way to one opponent (from the above image), which is the "operator" of the kite. 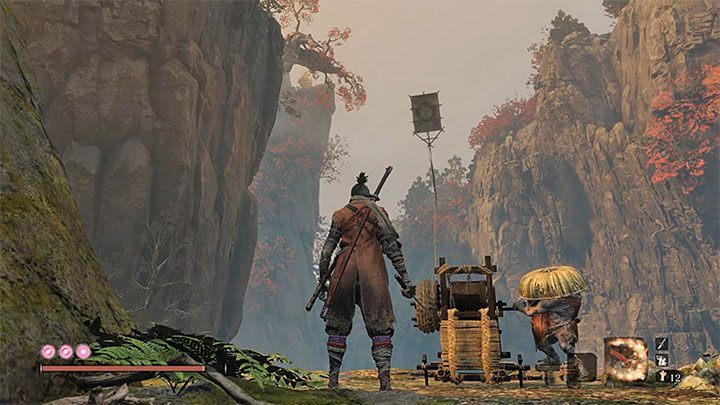 Make a deadly stab in the back on the "halfling" and immediately press the attack button (default R1 / RB) to activate the ninjutsu puppeteer skill. The enemy will be "tamed" and will become a temporary ally of the hero. He must approach the coil and use it to move the kite to another place. 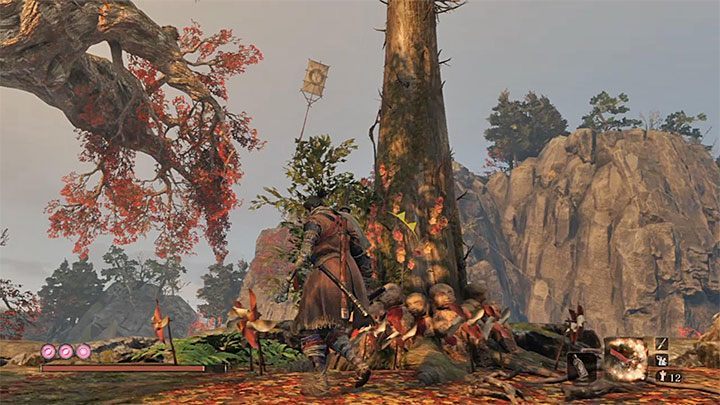 Now you need to go to the following areas of the Temple Senpou, specifically to the area called Shugendo. Gets there by going through the forest "patrolled" by monks. There is one big building with a group of monks, one "indestructible" monk and one big opponent. In the same area there is also a woman with whom you can talk.

If you have completed the previous steps correctly, the kite must be in the area (image above). 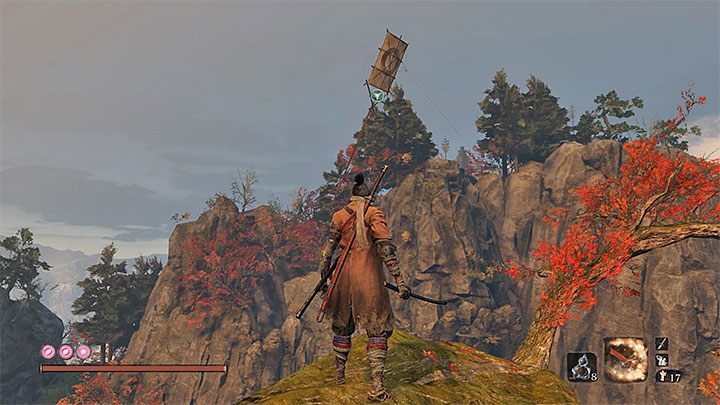 You just need to approach the kite. Turn left and hold on to more hooks. Climb a high rock, go to the edge of the abyss and look in the direction of the kite. Use a grappling hook on a kite and let the hero make a very long jump to a new part of the map. 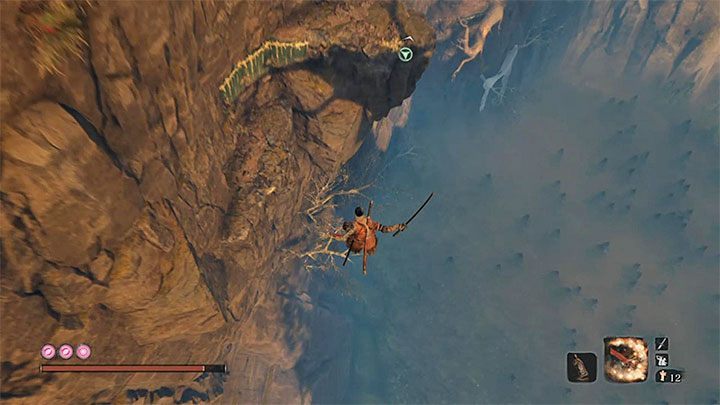 In the newly opened part of the Temple Senpou there are many new containers to loot, but you need to kill the snake, do not need to open them yet. Perform a jump in the direction of the lower shelves and use grappling hook in flight (as soon as the green icon appears - an example is shown in the picture). In the same way, grasp another hooks while the hero lands on a harder surface. 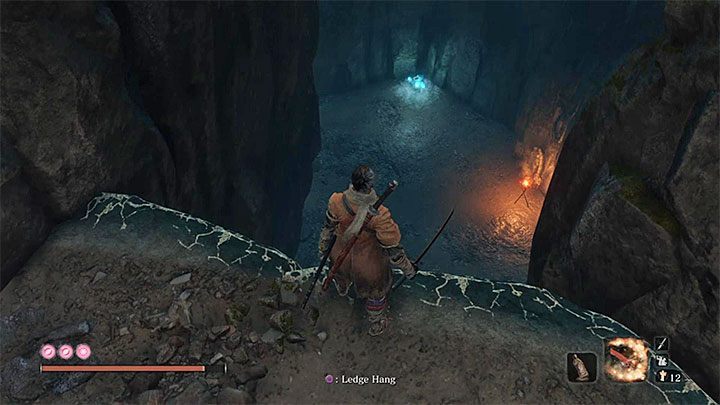 Soon you will get to the new sculptor idol - cave Sunken Valley (as part of an exception, it is displayed in the camp menu in the list of statues of the Senpou Temple). Continue the journey to get out of the cave. 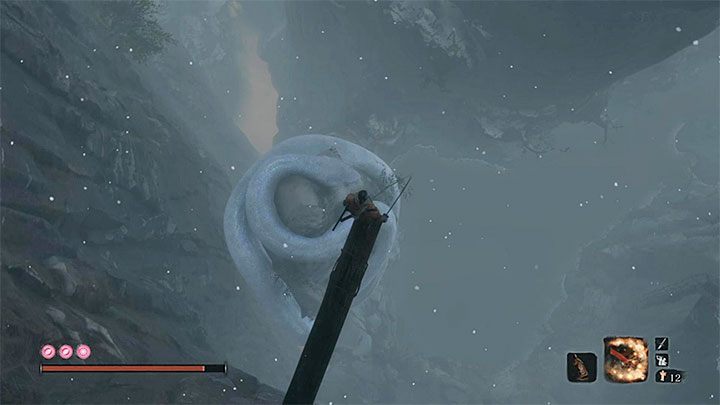 As soon as you find yourself in the open air, you will notice that a Great Serpent is resting below. Get on the beam that protrudes from the rock and go to its end. 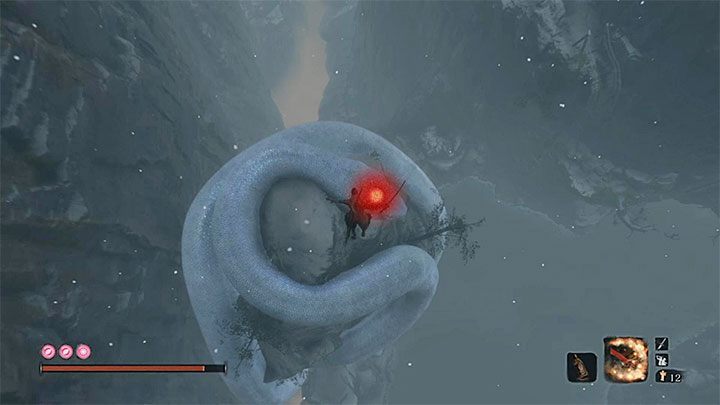 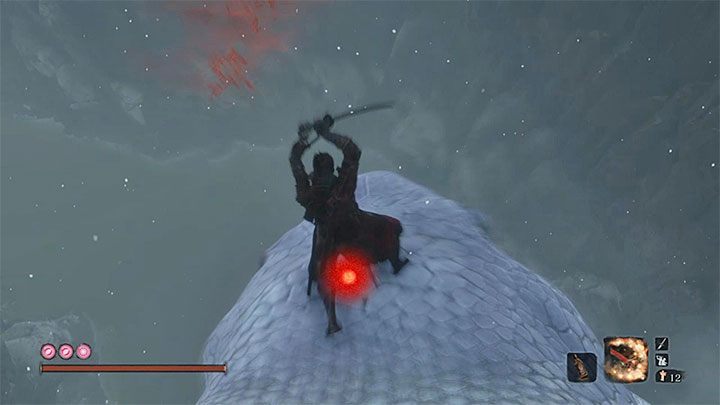 Make a jump towards the snake and press the fatal blow button on the fly. After the hero will cause the first blow to the monster, get ready to strike again a mortal blow. This action will lead to the ultimate defeat of the Great Serpent.