Ashina Castle serves as "a crossroad" for other locations. This is the second area, after Ashina Outskirts, that gives players more freedom in exploration. In this chapter, you can find a walkthrough for this area focused on the main storyline. Here, you can learn how to reach the castle's rooftop, the arena where you will face Genichiro Ashina, and how to reach Sunken Valley.

One of the main regions, part of the storyline; you reach Ashina Castle from Ashina Outskirts after defeating the last boss in that location - Blazing Bull. There are many locations you can reach from Ashina Castle:

Getting Sabimaru - a prosthetic tool 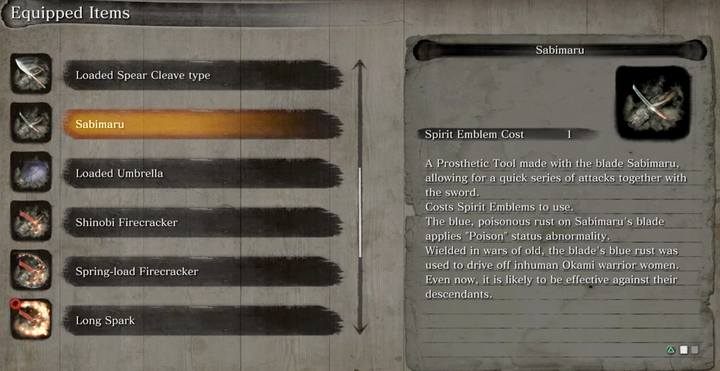 Get Sabimaru before you reach the top of the Castle. This prosthetic tool will serve you as a second, shorter, blade. Use it to perform fast slashes. Perform Sabimaru's full combo and the enemy will receive Poison status effect. 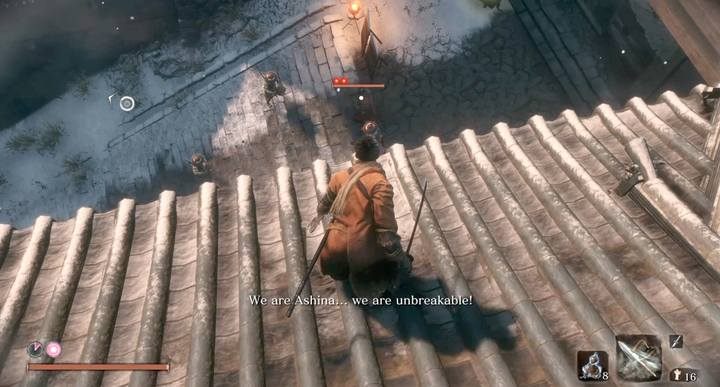 The sword is on the Castle's ground floor. You can get there only through one entrance - it is guarded by a mini-boss, General Kuranosuke Matsumoto. The General is accompanied by a few soldiers equipped with rifles. You can attack him with a critical strike by jumping from the rooftop on the right side of the stairs leading to the castle. After that, you have to eliminate the soldiers quickly. Remember, you can always run away if you receive too much damage. 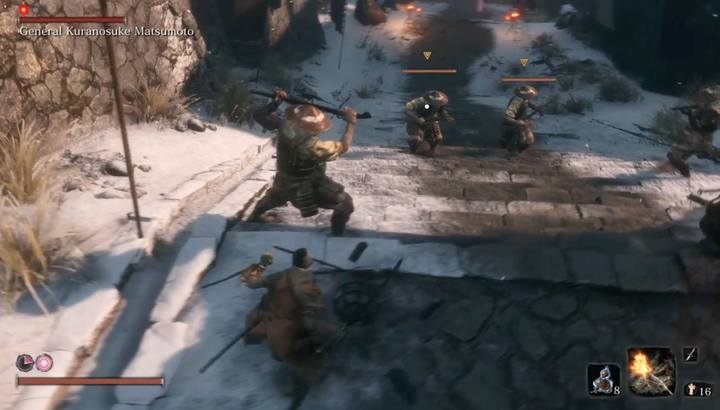 Eliminate the marksmen first, then deal with the mini-boss.

The fight with this mini-boss is similar to those in Ashina Outskirts - the enemy uses fast attacks with his sword that can be parried. He also has a special attack that can the blocked with Mikiri Counter. 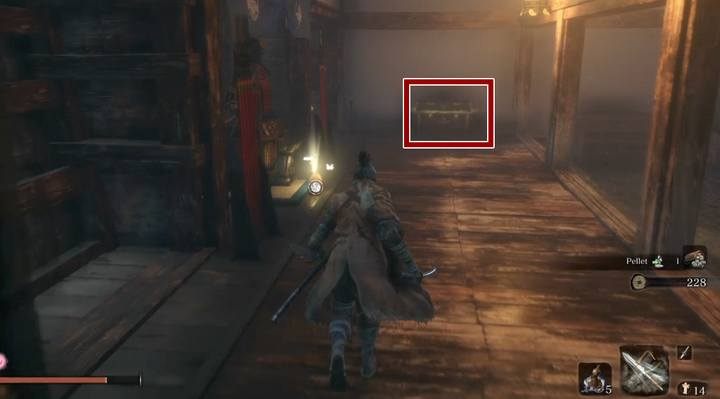 There are four more enemies inside the castle - they are guarding the legendary sword. Sabimaru is inside the chest located at the back of the room.

You should also unlock the gate at the end of the side corridor - thanks to that you will have easier access to the area at the back of the castle. You won't have to walk on rooftops to get there.

Reaching the rooftop - entering the Castle through a window 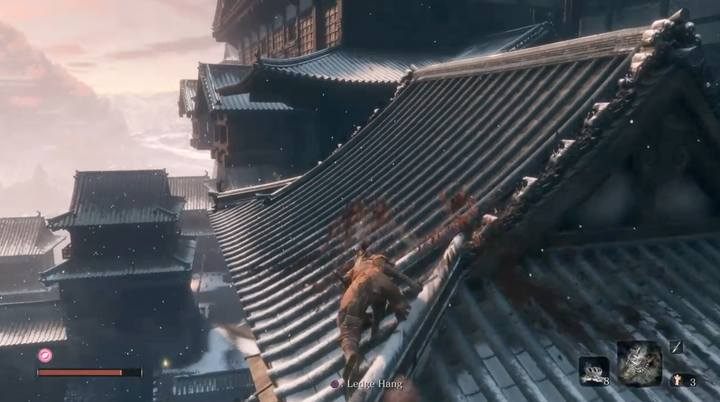 The only way to reach the Castle's rooftop is to get there from its right side. 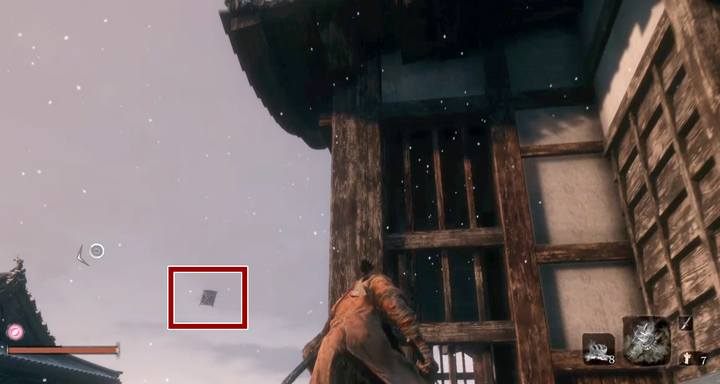 Enemies lurk behind almost every corner - these opponents are equipped with daggers and throwing knives (they fly like boomerangs). These enemies have a small amount of posture, but they can perform rather long combos. Remember, your objective is to reach the window located in the opposite part of the castle (above the water tank). There, you will find another Sculptor's Idol - Upper Tower - Antechamber. Don't hold back with using your prosthetic tools, resurrections and Healing Gourds - if you reach that Sculptor's Idol, you won't have to walk on the rooftops and fight these enemies anymore.

{niebieskaramka}Watch out, some of the enemies are flying by using kites - they hover high in the air, at the Castle's corners. These enemies can attack you suddenly - they are able to kill you with one attack!{/niebieskaramka} 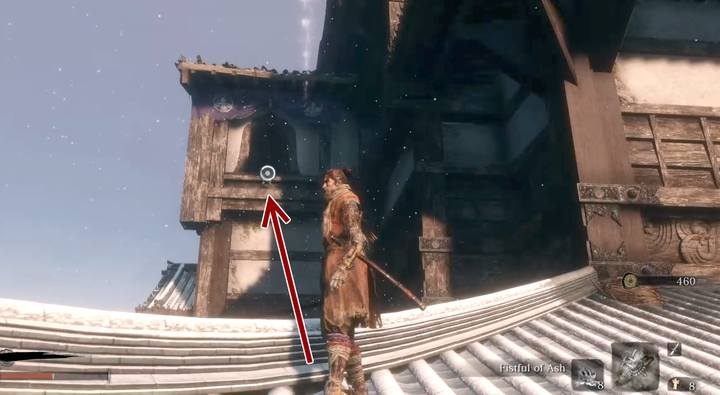 One of the suicidal enemies awaits right below the window. Jump through the window quickly to avoid him (don't jump into the water - if you do that, you will have to walk on the rooftops and defeat the same enemies again).

Go through the lobby first (do that after you unlock Upper Tower - Antechamber). Reach the upper floor - you will find another Sculptor's Idol (Upper Tower - Ashina Dojo). 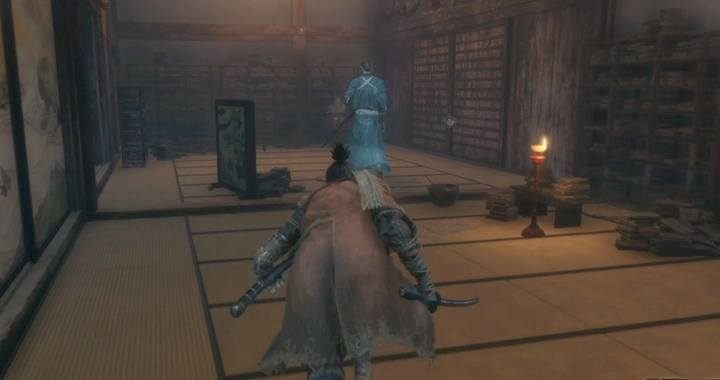 From there, you have to use the stairs and then turn right. Hug the wall to stealth kill an enemy. 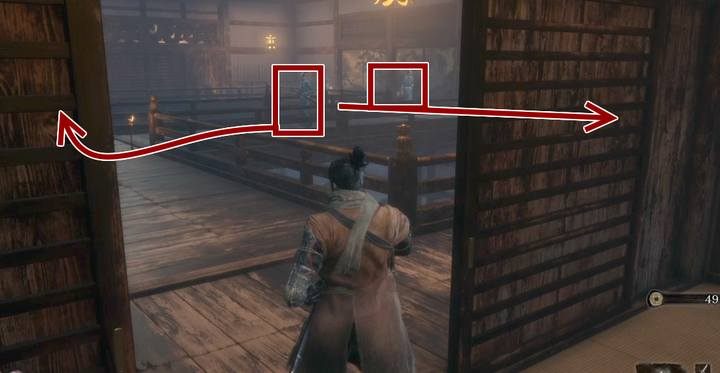 Move forward. Wait for the enemy in the middle to turn right - stealth kill him. After that, eliminate the old woman and the man walking in front of her (he now stands near the window). 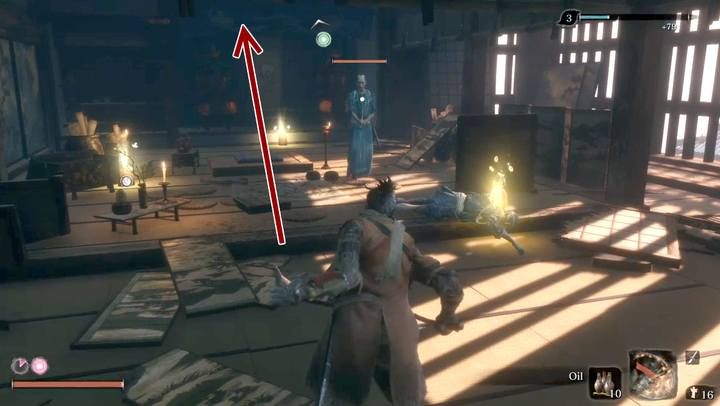 Sneak into the adjacent room with two enemies. You don't want to fight with both of them at the same time - stealth kill one of them. Defeat the second opponent. These foes are skilled swordsmen - deflect their strikes and use Mikiri Counter. When they are dead, use the grappling hook to reach the passage above the ceiling. 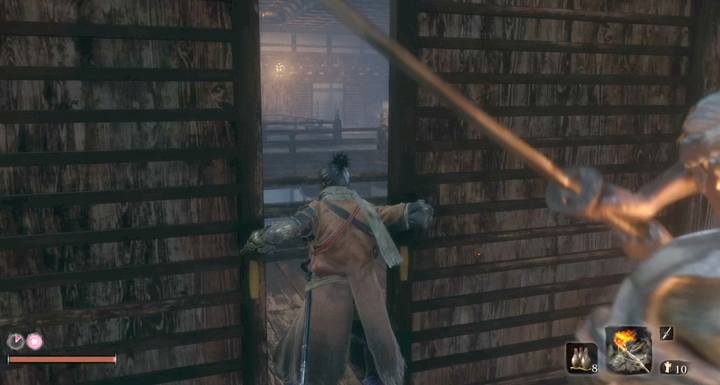 Ignore the enemies - your goal is to open the door.

You are now in the adjacent room. Open the locked door before you start fighting. Even if you die, the door will stay open. Do that, and you won't have to follow this path again. 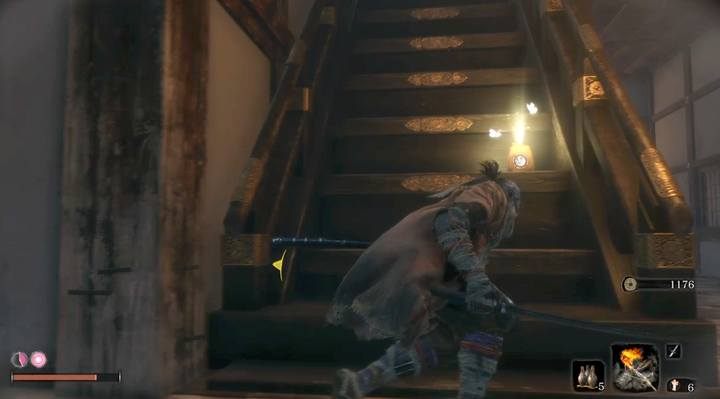 The stairs leading to a Sculptor's Idol are behind the door in the lobby, right around the corner.

Here, after getting the aggro immediately bring opponents out the door. Cause the additional two opponents around the corner of the wall may hear your struggle and come to aid their vanguards so you may have problems... When you take out all samurai warriors walk down the corridor and climb the stairs. Interact with the idol.

The way to the roof: the path 1 - boss Ashina Elite 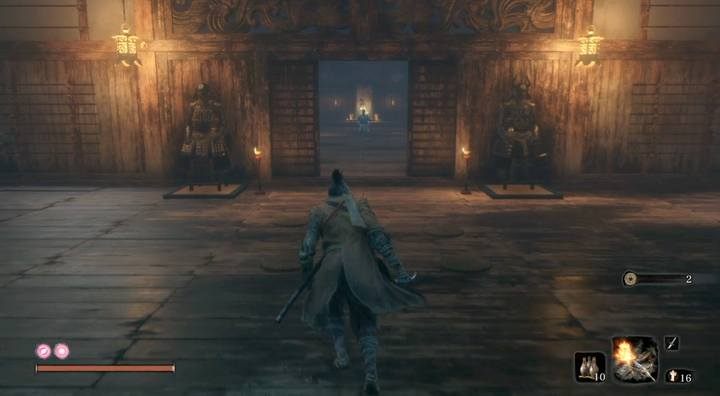 Standing behind a statue of "Ashina Dojo in the Upper Tower" you see a boss in the next room - Ashina Elite Jinsuke Saze. You have to defeat him to unlock one of the paths to the roof. It is worth doing this, because if you die in battle with the main boss (Genichiro Ashina - and it happens many times), this road allows you to quickly get to the roof. 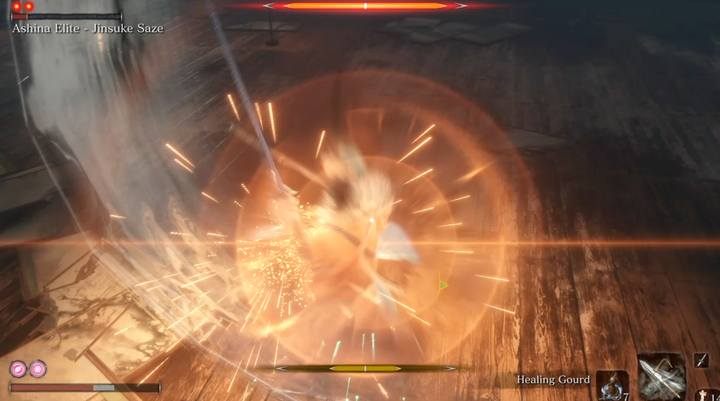 The battle is very simple - the only thing you have to do is learn how to parry the opponent's combo at the right moment when he pulls out his sword. It is a long and the strong combination, however, it rapidy destroys the boss' posture, so after about three counters, the boss should be powerless and ready for a critical attack.

After this battle, you can jump through the window to the left of the entrance. Now you just need to go up the roof to get to Genichiro Ashina. 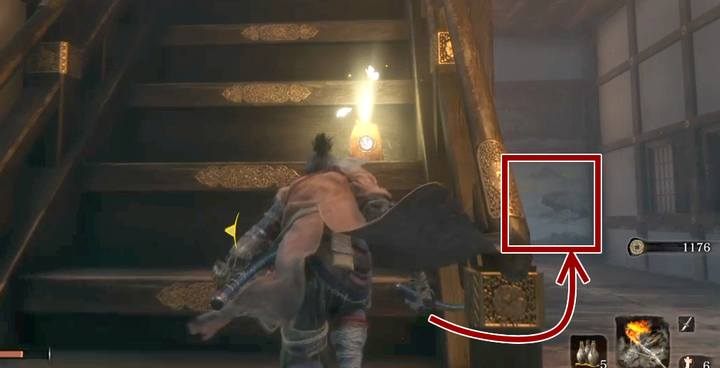 The second way to the roof, a little longer, and also dangerous (and the enemies on it always respawn, so this road is not too practical - has rather the use if you want to go to the roof of the castle, but you're not going to fight with the Genichiro boss or Ashina Elite boss). Going from the "Ashina Castle - Dojo" idol go down the stairs and get rid of the two samurai. Behind them is a wall-screen - destroy it with a sword slash. 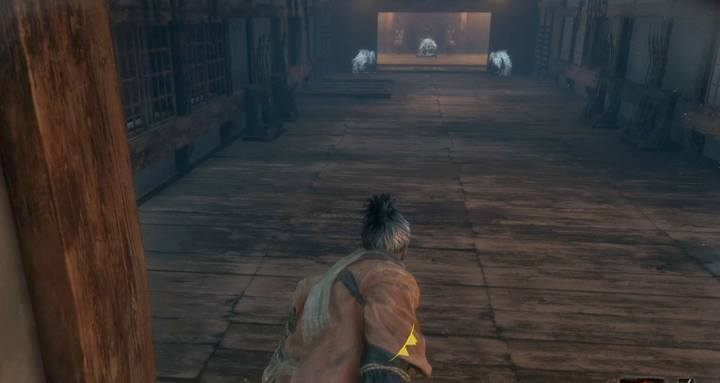 In the arena you have to defeat 3 opponents to be able to go further.

Go down to the arena below, where you will again encounter enemies known from the road through the roof - they use throwing knives. Use firecrackers and concentrate on attacking just one enemy: fast cuts cause the destruction of the enemy posture at a fast pace.

Try to reduce the posture of the boss, and the fight will last less.

Genichiro Ashina is a very challenging boss of the main story. He has three health bars (after cutting two bars boss transforms and you fight him again). In battle, the whole point is to learn the strikes and combos of the enemy. You have to attack him and parry his strikes. At the initial stage, it is worth doing a lot of leaps backward to be able to use counters that cause damage - maybe not much, but the boss with weakened health renews his posture much slower. In this battle, you cannot escape from the arena.

A special attack with a shock can be even deadly.

In the second stage, the enemy behaves the same as before, but sometimes he uses lightning powers (try to be in the air when he is performing this attack - if you get hit in the air and press the attack key before landing you may avoid electric shock). In addition, he often uses special attacks - but if you avoid them, the boss becomes a rather easy target for quick damage.

The battle will be useful: Eel Liver (protects from electric attacks in the second phase of the battle), the offensive ability called Shadowrush (the maximum skill you can leap towards to the enemy); if we are talking about tools, prostheses, almost every seems to be handy: firecrackers or Mist Raven for separate attacks, Fire Vent to cause more damage or Loaded Axe for rapid descrease of enemy's posture. More tips and information related to the fight with this boss you will find on the page Genichiro Ashina in the Bosses section.

What I should do after fight with the boss?

When you defeat Genichiro, the continuation of the game will take place in the Sunken valley. Previously, however: