This page in our guide to Sekiro: Shadows Die Twice focuses on the fight with Guardian Ape, the first boss you will face in Sunken Valley. This is a mandatory boss you have to defeat in order to make progress in the story. Our description contains information about Guardian Ape's attacks and ways of weakening the creature. 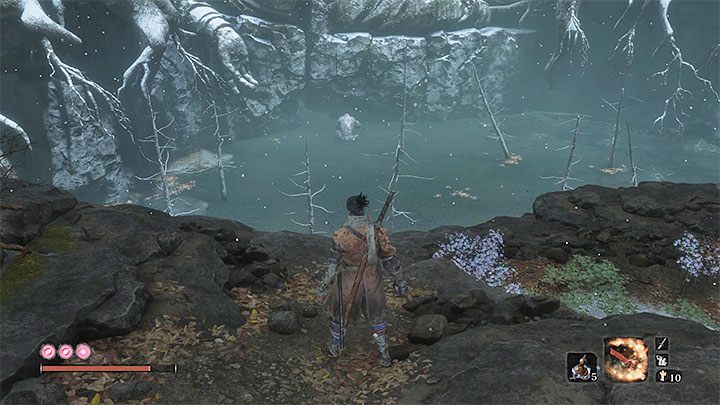 Rewards: Memory: Guardian Ape, Slender Finger crafting material - you need it to craft one of the prosthetic tools, Lotus of the Palace - a quest item hidden in the small area behind the boss.

You will encounter the Guardian Ape at the end of Sunken Valley (the area located behind Ashina Castle). To fight this monster, you need to go through the entire valley and face to other bosses. Besides that, you will need to open a passage in Gun Fort (this requires the key found in the castle's library).

The Guardian Ape stays in a large waterhole. You can't perform a stealth Deathblow on the monster (even when you jump from one tree to another by using the grappling hook).

The first phase of the fight with the Guardian Ape 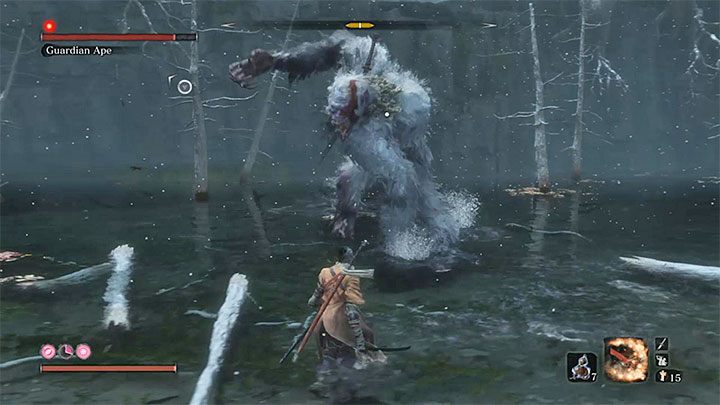 In the first phase, the Guardian Ape is a beast-type enemy. The creature uses its fists to perform all of its main attacks. The boss can use slow and powerful blows as well as a series of rapid attacks or ground pounds. Despite the Guardian Ape's size, its standard attacks can be deflected with the sword.

The Guardian Ape will throw rocks at you if you move away from it. You can block this attack (and lose a few health points) or dodge at the right moment. 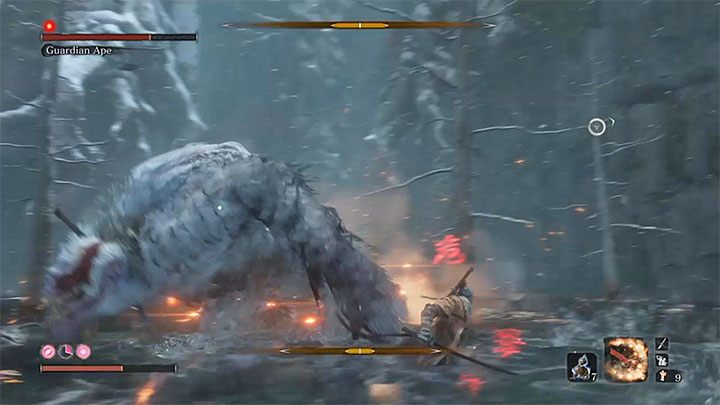 It is important to dodge the Guardian Ape's attacks that are marked with a red icon. Be careful when the boss tries to land on you or to grab Sekiro - both attacks will deal you a lot of damage. The best way to avoid them is to move away from the boss.

The arena is large. Use interactive hook points on trees to move away from the Guardian Ape. However, the monster is able to topple the trees over. 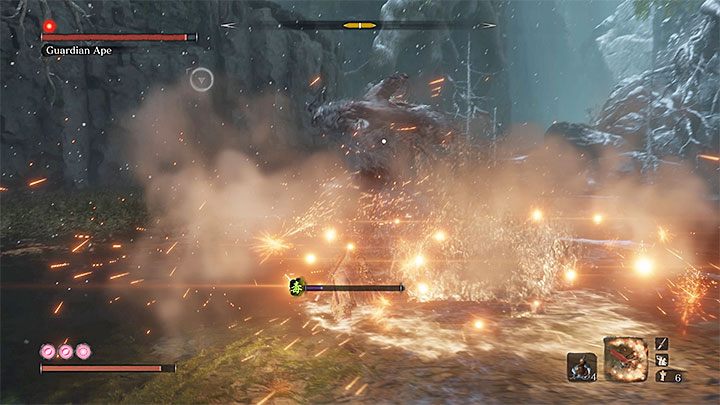 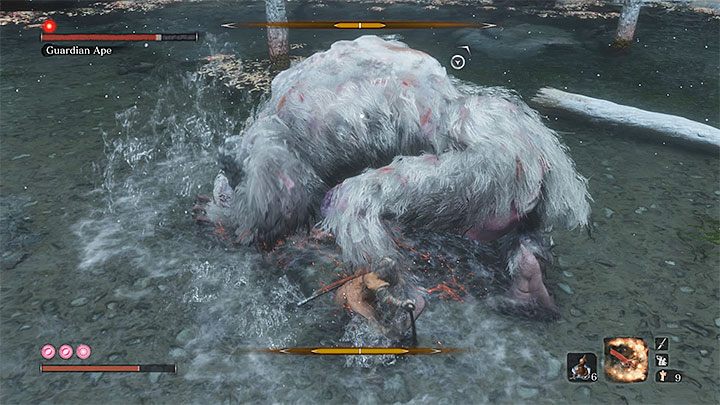 Watch out for gases emitted by the Guardian Ape. If you stay too long in them, you will get poisoned. 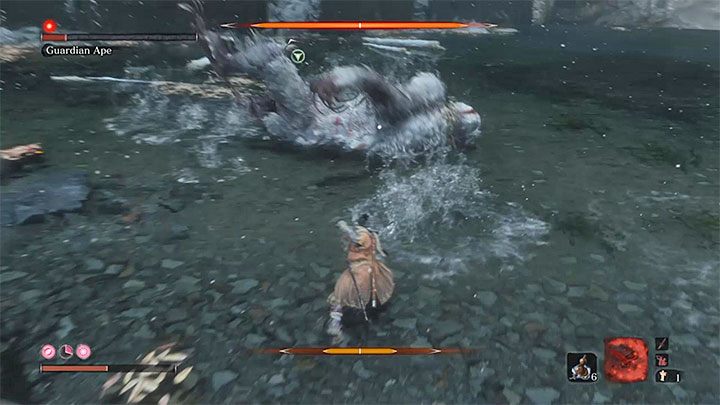 Another good tactic is to wait for the boss to roll on the back. Wait until it stops flailing its limbs and then attack before it gets up.

Keep attacking the boss until you deplete either its health or posture bar. End the phase with a Shinobi Execution. However, this move won't end the fight.

The second phase of the fight with the Guardian Ape 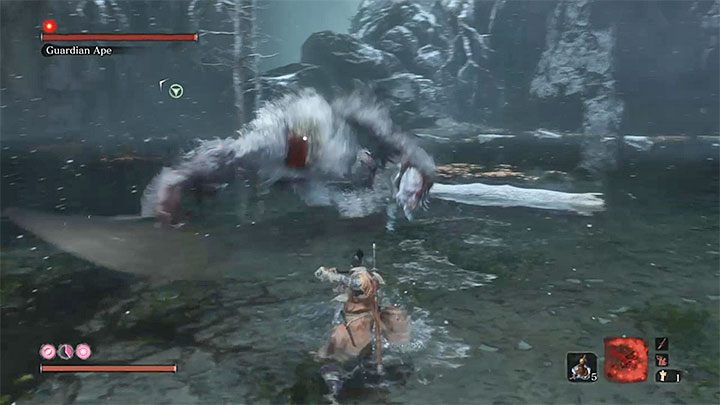 The second phase starts a few seconds after the first. Use this time to replenish health or use other consumables. We recommend placing a Divine Confetti in Quick Items bar - this item can be useful in the upcoming fight.

Despite getting decapitated, the Guardian Ape stands up - the undead enemy has another red dot. 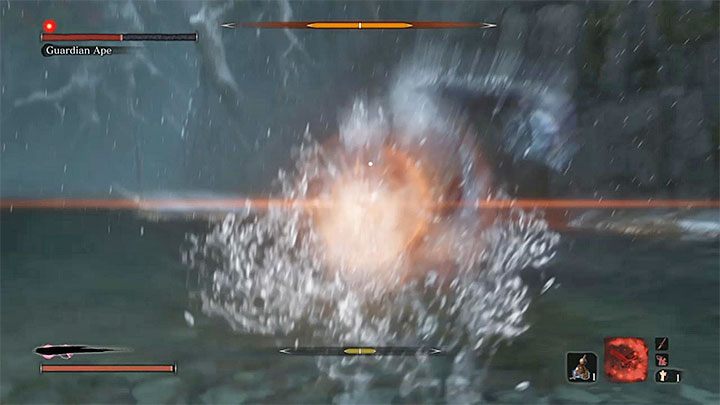 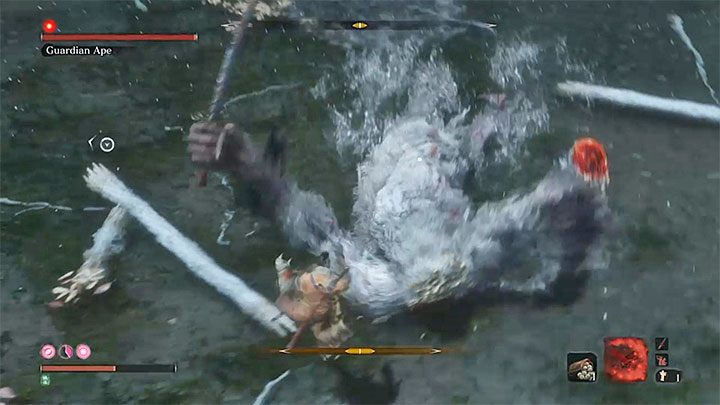 In this phase, the Guardian Ape will use a melee weapon. You can deflect the majority of the boss's attacks but this requires a bit of practice, especially when the consecutive swings happen one after another. Swings marked with a red icon are the exception - you need to jump over these attacks.

There are two good opportunities to attack the boss: 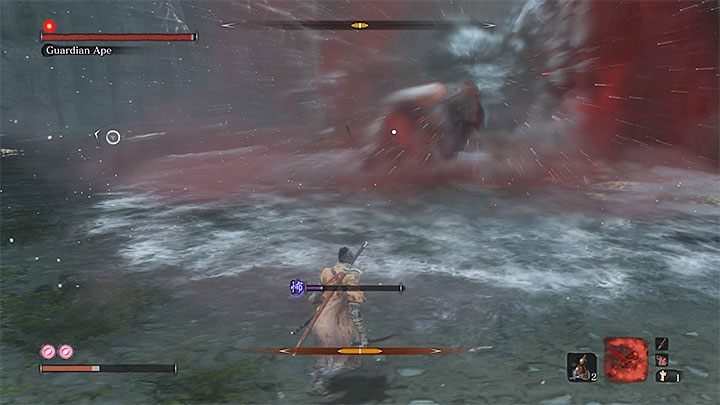 The boss's most dangerous attack is its roar that can inflict Terror status. This move is marked with a red icon. Move away from the boss - if you stay too close to the monster, you will receive a lot of damage or even die when the purple bar gets full (it appears above the hero's posture bar). Besides moving away from the boss when it is about to roar, you can also use other defensive techniques that will increase your Terror defense:

You need to deal another Deathblow. This time, the attack will be fatal. However, you will encounter the Guardian Ape once again (in the later section of the game).