It's not easy to answer a question like is Sekiro more difficult than Dark Souls? At first glance, Sekiro is very similar to previous FromSoftware games, but after spending some time with it, substantial differences become apparent. The best answer is thus - in some respects, it is more difficult than Dark Souls, in others, it isn't. We shall explain what we mean exactly in the following section. 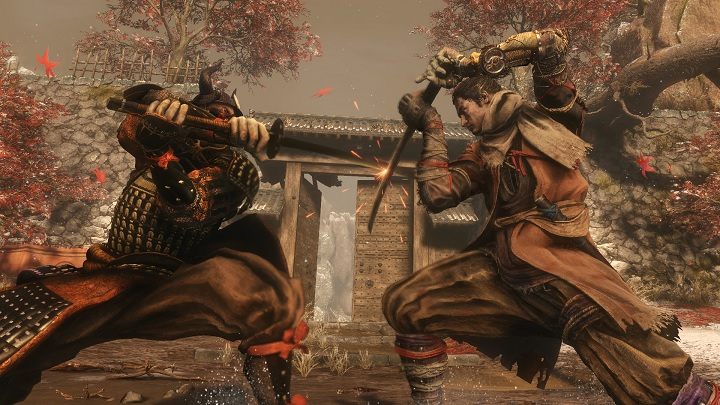 Sekiro: Shadows Die Twice is, first and foremost, an action game. This means relies strongly on the player's actual skill and requires pretty good reflexes during fights. A more secure gameplay style based on waiting for an opponent's mistake can be very difficult, or even impossible in some cases. What's more, the game can even punish a passive playstyle. It's a high-risk-high-reward type of combat system - you have to take the risks and constantly weaken the enemies.

In Sekiro: Shadows Die Twice, the single, most important element of combat is flawless parrying of opponents' attacks. If that's something you avoided in previous FromSoftware games, you will have to learn the combat system of Sekiro practically from scratch. Parrying is of course not the only kind of viable strategy. You still can (and sometimes should) depend on dodging and blocking.

Sekiro: Shadows Die Twice doesn't allow you to call other players to help you, as the game features no multiplayer/online functionalities. So, if you have problems defeating any of the bosses, you can't depend on anyone else (unless you have an experienced friend who could come over and defeat the boss for you - like in the 90s). You must solve each problem on your own, e.g. by learning more about the types of attacks of the enemy or equipping the protagonist with higher-grade items that will facilitate defeating the boss.

The greatest amenity included in Sekiro: Shadows Die Twice, is the added ability to sneak. You can rely on it practically throughout the entire game and avoid enemies, or attack them by surprise. Stealth attacks can automatically kill weaker enemies, and significantly weaken stronger enemies (including bosses), making the direct confrontation with them (much) easier.

Another potential element that makes Sekiro: Shadow Die Twice easier is the increased mobility of the character brought to you by the grappling hook. This gadget can be used not only to easily reach e.g. the roof or high rock shelves but also to more easily surprise opponents (e.g. landing on the opponent combined with execution) or expose them to further attacks during combat.

Sekiro: Shadows Die Twice doesn't feature extensive RPG mechanics. This will be particularly encouraging for the players, who for example, hate browsing through detailed character stats or constantly changing the main weapon. Fortunately, this does not mean that there is no progression system in the game or that you can't make important decisions related to the hero's development. During the game you can, for example, unlock new katana techniques or new arm enhancements that can offer unique attacks during combat.