From this chapter of the guide to Sea of Thieves the player will learn how the emissary system works, how to sail as an emissary and what can be gained from it.

In Sea of Thieves, the player can take on a huge responsibility and represent one of the trading companies as an emissary. An emissary role provides various profits but it also makes a player susceptible to new dangers as trading company ships are an attractive target for other players - especially for the followers of The Reaper's Bones.

How to become an emissary in Sea of Thieves?

Any single player or a crew that wants to become an emissary must first buy an emissary flag from one of the representatives of The Gold Hoarders, The Merchant Alliance, or the Order of Souls. To purchase an emissary flag, a players must have at least rang 15 in selected company. The flag costs 20 000 gold coins. The Reaper's Bones offers their flag to any player who manages to reach their hideout, The Reaper's Hideout island. It is worth mentioning that you cannot become an emissary of Sea Dogs or The Hunter's Call trading companies. 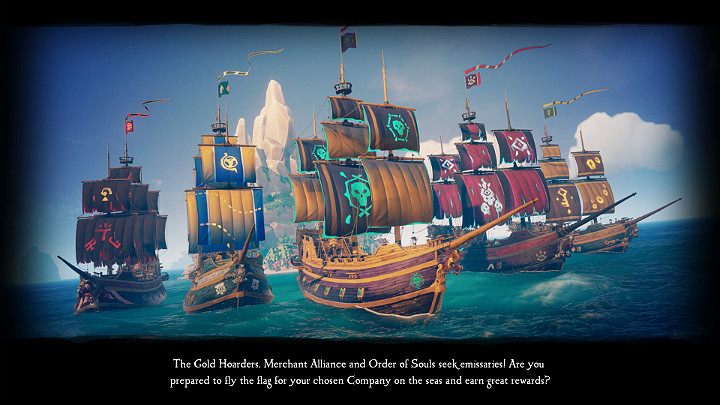 Once you buy the flag, you must walk towards the emissary table located near the representative of a company. Then you must confirm your choice. Once you complete this action, proper flags will be used on your flag - you will officially become an emissary.

Before you stop playing a session in Sea of Thieves, take of your emissary flag and give it back to the representative of a trading company. You will be rewarded - the size of the reward will depend on which emissary level you managed to reach. If you log out with the flag on, it will be dropped on the sea. Other players might take it and sell it to the representative of The Reaper's Bones.

Emissary level - how to increase it?

Once you become an emissary, you gain access to a special emissary progress bar. It is split into 5 levels. All activities performed under the flag of a trading company - obtaining treasures, raiding other players, defeating Megalodon, Krakn, skeleton captains, skeleton ships, or taking over skeleton forts, will be awarded with points.

If you choose to change the trading company you represent, you log out, your ship sinks, or you are disconnected, then all your emissary rank progress will be lost.

Emissary in Sea of Thieves - rewards

Emissaries sailing with the flag of one of the trading companies can count on great rewards in Sea of Thieves In addition to increased payouts for selling treasures and completing contracts, the players will also gain access to special missionary missions and exclusive cosmetic items. Those who choose to work for The Reaper's Bones will gain great profits for delivering the flags of other companies to The Reaper's Bones' hideout.