The factions in the Sea of Thieves provide constant access to the missions - quests called voyages in the game. For each order you will receive gold pieces allowing you to buy cosmetic decorations of the ship or elements of equipment and even new missions. Over time, you will have access to more expensive, but more lucrative orders. Your goal is to advance to the 50th level in each faction to unlock the conversation with the mysterious character in the tavern and access the endgame content of Sea of Thieves. Each faction offers different types of orders.

Gold Hoarders offer missions to recover missing treasure chests. After voting and activating a selected voyage, you will find an additional map under the E key, with a red cross marking the point of a hidden treasure or a slightly more difficult version with a puzzle - a game of words that you need to unravel. 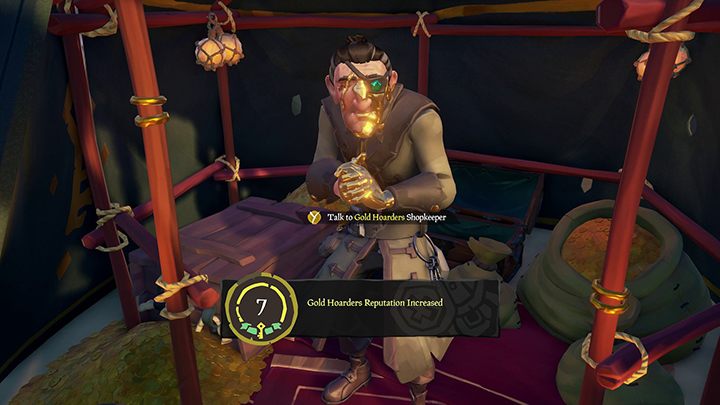 Representatives of the Gold Hoarders faction are waiting for you in the tents on the island - the base.

In case of a cross on the map it is enough to compare the shape of the target island with those on the large map and select the most similar. They all have quite irregular, characteristic contours, so it is not difficult. Select a shovel from the item menu and dig to the desired location. If we guessed right, we will be informed by the humming sound of a shovel hitting the planks. You have to take the excavated box to the ship - we can swim and dive with it without any problems, or use the action button to climb the deck- and finally safely deliver it to the representative of the faction in selected base. 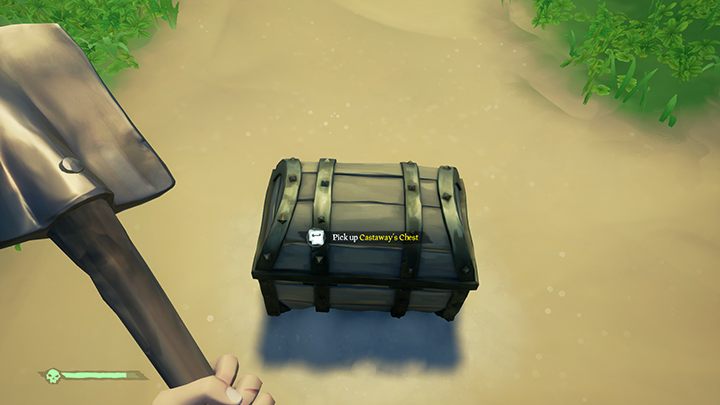 Use a shovel a few times to dig out a treasure (keep doing that until you can see the interaction button icon).

The puzzle missions contain the name of the island in the text, but the place where the treasure is buried must be determined by us. We need to search the puzzles for the names of characteristic places: totems with skulls, boulders with paintings, bonfires, and so on. The final step will be to measure the number of steps in a certain direction. We can do this very precisely using the compass, holding the left mouse button and moving forward at the same time. 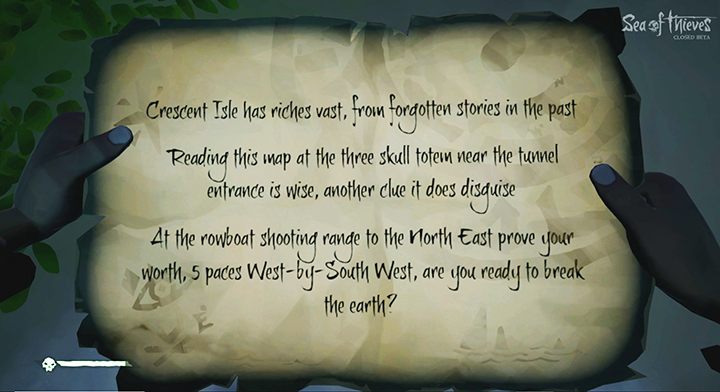 An example of a puzzle: you have to go to Crescent Isle, where you have to look for a totem with three skulls and an entrance to the tunnel. In the northeast by some cannons/cannon range you should take 5 steps in the southwest direction.

Chest types and their worth:

Sometimes you may come across a cursed chest, which will not be so easy to get to its destination.

Chest of a Thousand Grogs - carrying this chest will make you completely drunk. Your vision will be blurred, your steps will take you to the side, and your ears will be filled with screams and tavern singing. Dropping the chest will immediately turn off the undesirable effects.

The Order of Souls faction offers quests related to PvE fights - defeating a cursed captain, a skeleton with his underlings. After purchasing Voyage, you will receive a wanted poster with the face of the man you're looking for, as well as his place of residence. In the case of larger islands, a small puzzle will need to be solved in order to pinpoint the location of the mini-boss. Hostile skeletons can be armed not only with swords, but also with firearms. 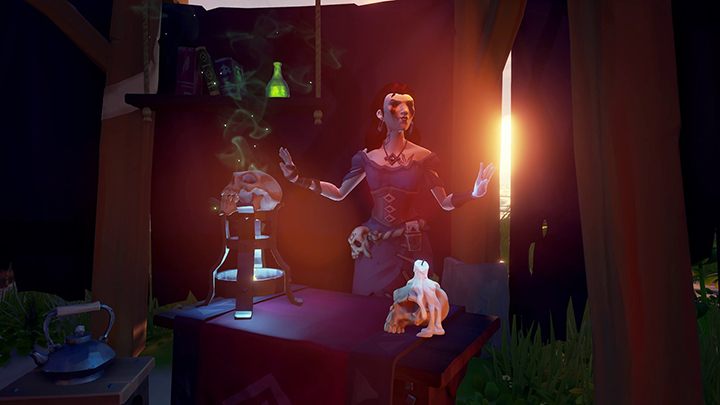 Representatives of the Order of Souls can usually be found in wooden huts.

After defeating several waves of respawning guards, the captain, or sometimes even multiple captains will appear. Once dead, he will leave a skull with a green glow - remember about it, as it's required to collect the reward from the client. Watch out for skeletons when leaving the island.

Types of skulls that can be collected: 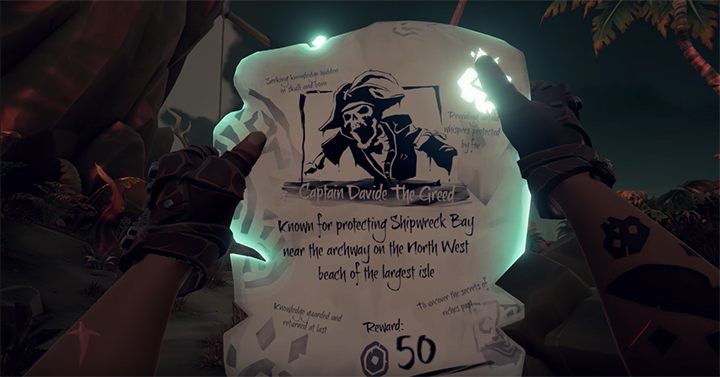 An example of a pirate captain wanted poster.

The Merchant Alliance faction offers trade missions, focusing on acquiring and transporting a good to a specific place. Most often you will be looking for and catching chickens and pigs scattered on nearby islands, as well as transporting them to the specified locations. When completing this quest you need to keep in mind that you can carry a single cage at a time. If you need to carry several animals, you need to transport them one by one.

Pay attention to the color of the pigs and chickens that you need to deliver - only those included in the order will be accepted. There are two types of pigs - black and pink - and three types of chickens - white, gold or red spotted. 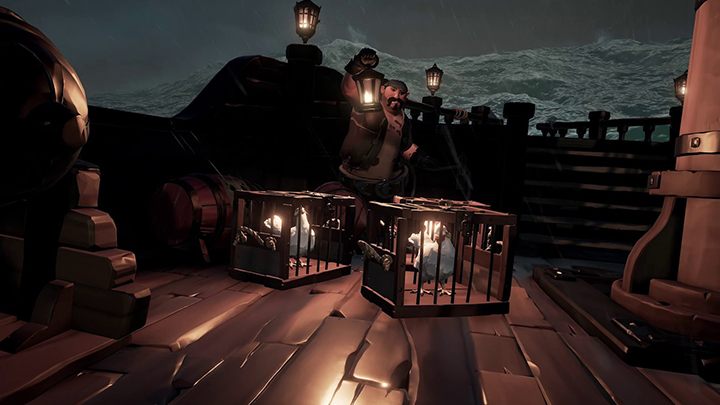 When completing tasks for the Merchant Alliance, you need to take good care of the animals on board. Do not keep them in the hold - otherwise, the water might flood them.

To catch an animal, you first need to locate it on one of the nearby islands. Afterward, head there with a cage and, while still holding it, chase after the unlucky creature. When you're close enough, you will have only a fraction of a second to press the left mouse button - if you're successful, the animal will be caught. When delivering them to the ship you must keep in mind that those animals don't like to be kept underwater - you will notice when they are running out of oxygen. Remember to deliver them to the correct location - it might differ from the place you've started the quest at.

Note! Most of the trade missions are time-limited and you need to deliver the animals before it runs out. 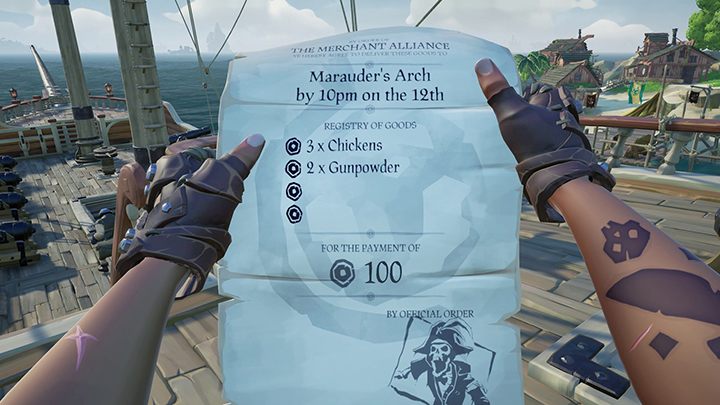 An exemplary Merchant Alliance contract, ordering you to deliver 3 chickens and 2 barrels of gunpowder to Marauder's Arch by 10 pm on the 12th.
See/Add Comments
JOIN FOR UPDATES