From this chapter of the Sea of Thieves guide, the player will learn how to become a real pirate and learn the most important aspects of the game in a more appealing form.

Sea of Thieves offers players a great deal, such as the ability to sail various ships in open waters, perform various tasks for which you can receive rewards and reputation points, and allow you to fight sea battles with other players or skeleton ships. It should also be noted that in Sea of Thieves there are many side activities that the player can do in his spare time, such as fishing and cooking. We have prepared a short introduction to Sea of Thieves - 7 simple steps that will make you a real pirate and prepare you for further gameplay.

When you first log in Sea of Thieves you will have to create your own pirate. The game will give you a few suggestions, which you can change any number of times until you find the look that satisfies you. A pirate is your avatar who will be controlled during your time in-game. 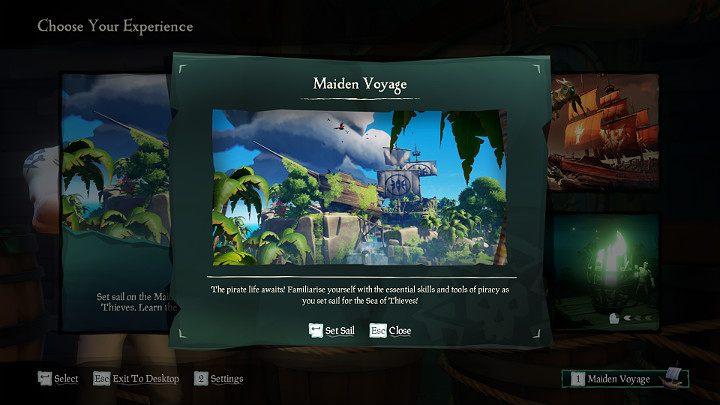 The first and basic thing any land rat should do is learn the mechanics of Sea of Thieves. Fortunately, the game offers a very useful tutorial called "Maiden Voyage", which will introduce the player to the basics of ship control, as well as teach them how to perform basic activities and fight.

After completing the tutorial, the player lands on a completely new island with many buildings and shacks, the so-called. Outpost. There will be an anchored ship waiting in the port - your first ship in Sea of Thieves! However, before you go on your first trip it is worth taking some time to collect the right amount of supplies. 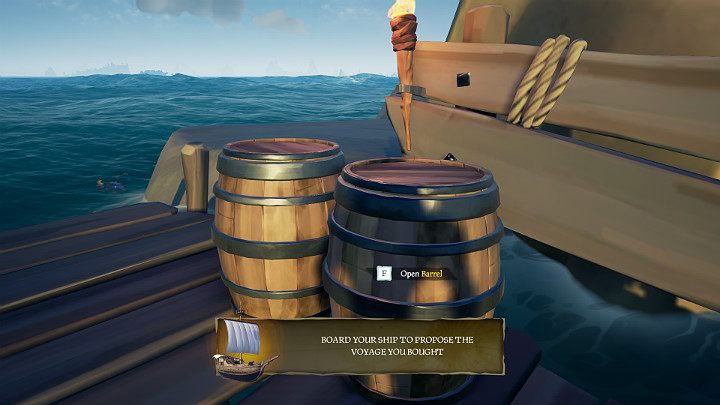 Supplies can be found in barrels that have been scattered all over the island. By looking into the barrels you can get extra food, cannonballs, boards, and other items. It is worth remembering that you can carry 10 cannonballs at a time and 5 pieces of other items such as boards and food. All collected supplies can be deposited into appropriate barrels on the ship - food and board barrels are below deck, and those for ammunition are on board.

As you scour the island for supplies, visit the buildings and huts found around it. Don't waste time looking into barrels with the description "Empty," because you won't find anything in them. The emptied barrels will eventually fill up on their own, so it's worth going back to them every now and then.

Once you've collected enough supplies, you're ready for your first expedition that will search for hidden treasure! To receive your first treasure hunt task, you must go to a representative of the Gold Hoarders trading company. You'll find him in a blue tent near the shore. 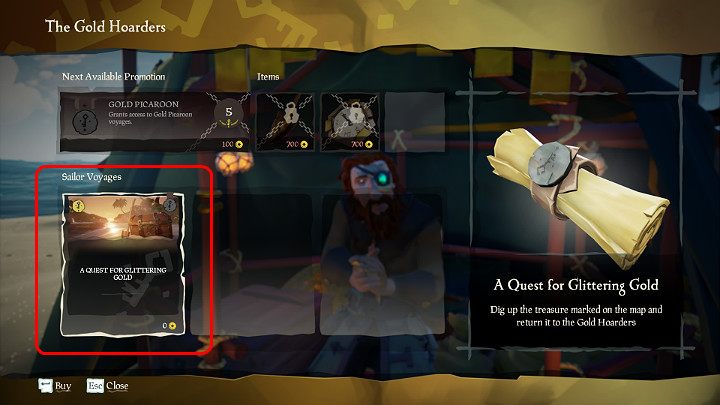 The first job from the Gold Hoarders is available for absolutely free so go ahead and buy it. After completing this task, a few more tasks that appear will remain free, but higher-end tasks have to be paid for. 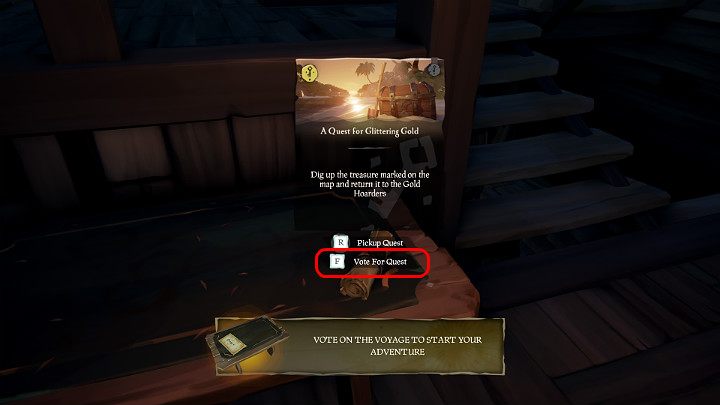 After buying the first order from a representative of the Gold Hoarders trading company, you must return to your ship, approach the captain's table and activate the task described as "Voyage". After a while, a scroll of paper will appear on the tabletop and you must select "Vote for Quest" to activate the task. 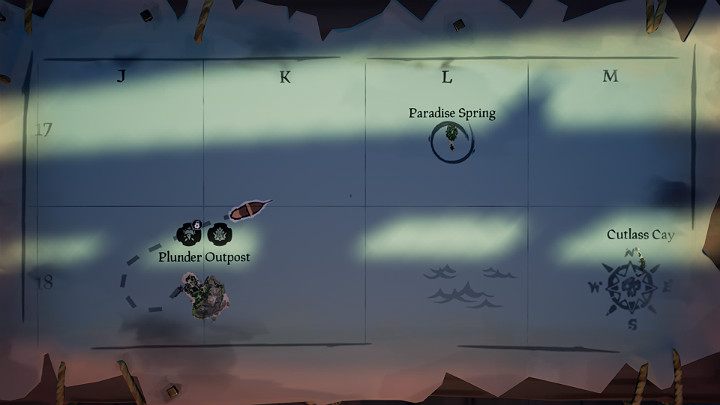 After this, a new item will appear in the item menu in the "Quests" section - a treasure map. On the map, you can see exactly the shape of the island where the treasure was hidden, and your task will now be to find that island on the map that every pirate has on the standard equipment of his ship.

To make this task a little easier, mark the place you need to go to on your map. This will keep you from losing sight of your target and make it easier for you to get there. 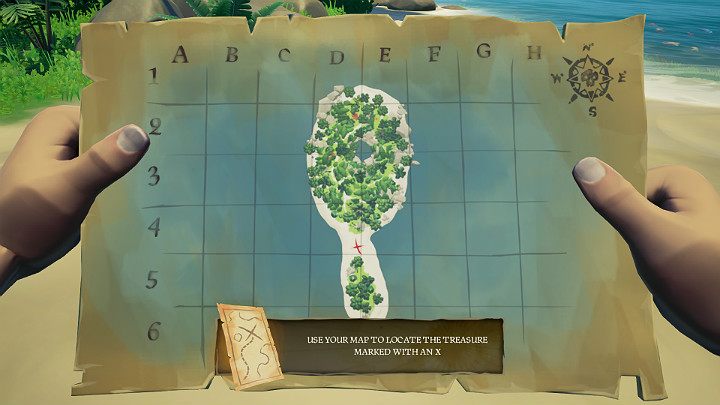 Once you've reached the right island, roll up the sails and drop the anchors so the ship doesn't sail without you. Open the map again and try to find a characteristic point that will make it easier for you to find the place marked as red X. In the image above you can see that there will be no problem with finding the buried treasure, because it is located between one and the other clumps of greenery. 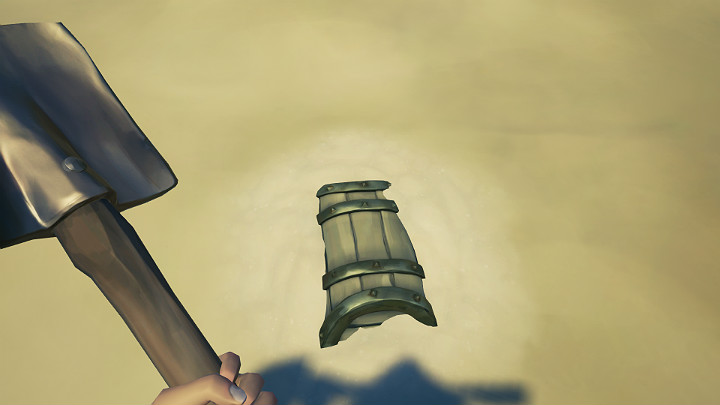 Go to the marked point, pull out a shovel from the item menu and start digging. You'll know you're digging in the right place when you hear the sound of a shovel hitting the wood. In order to dig up the treasure chest, you will have to work the shovel for a little while longer. Once the treasure is on top, carry it back to the ship and sail to the port where you've picked up the assignment. 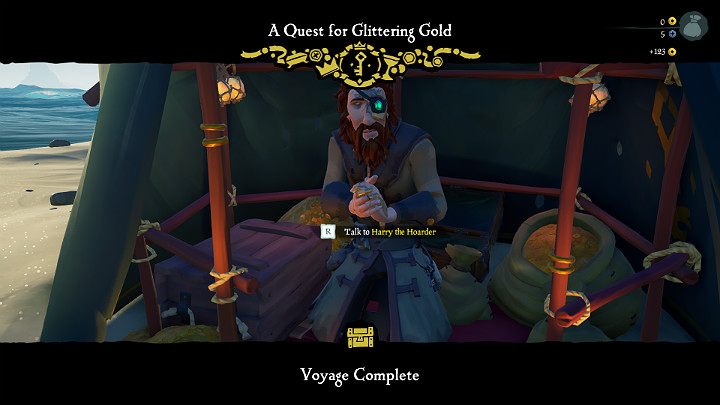 When you reach the port, remember to roll your sails and drop your anchor. Take the treasure chest with you and bring it to a representative of the Gold Hoarders trading company. Hand over the treasure chest to gain some gold coins and reputation points. 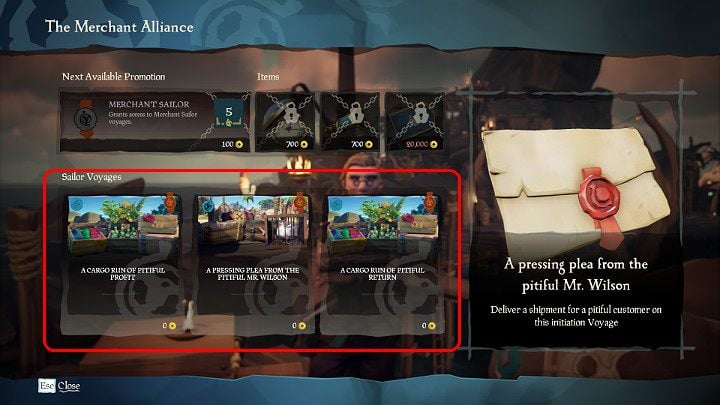 Same as with the Gold Hoarders assignment, you must purchase one of the free tasks and then activate it on the captain's table inside the ship. Once the task has been accepted, you can proceed with it. 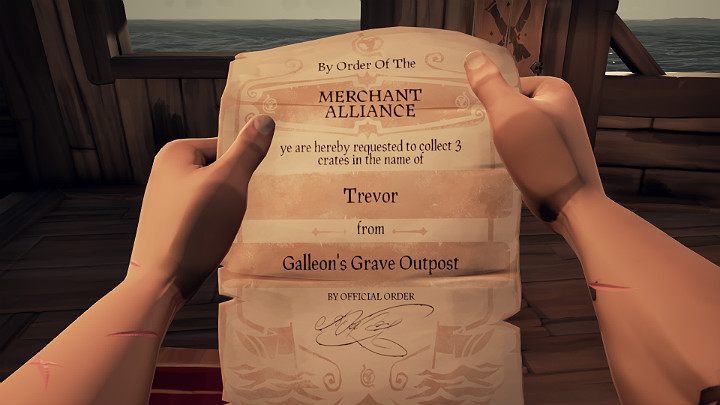 Once you have accepted the task, a new item will appear in your equipment - a letter describing the job to be done. In this case, three crates of unspecified goods must be collected from Trevor, who is in Galleon's Grave Outpost. 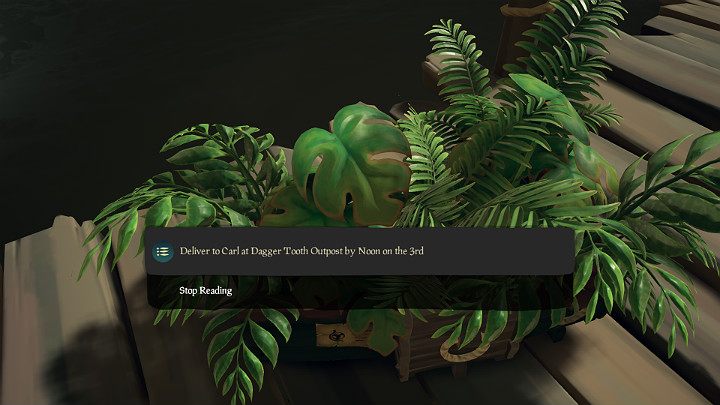 You've retrieved the goods from Trevor - time to see where they should be delivered. In this case, all the boxes must be delivered to Carl, who is found in Dagger Tooth Outpost. It is also worth noting which time the goods must be at the recipient - in this case, 3 a.m. 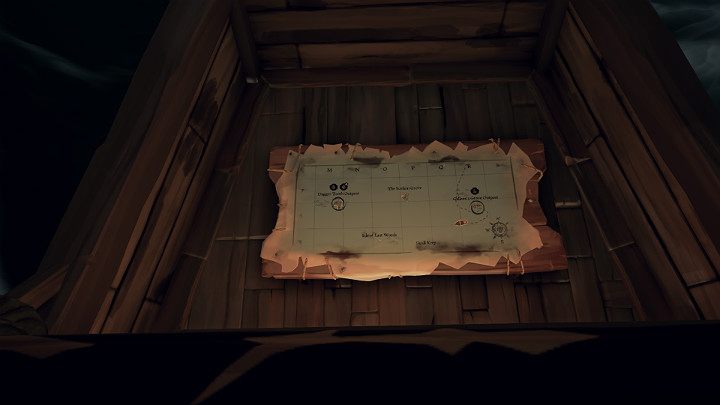 Mark your destination on the map to make it easier for you to get there. Remember that you don't have to constantly go below deck to check the course - all you have to do is lean over the railing at the stern of the ship behind the steering wheel and you'll see everything clear as day. 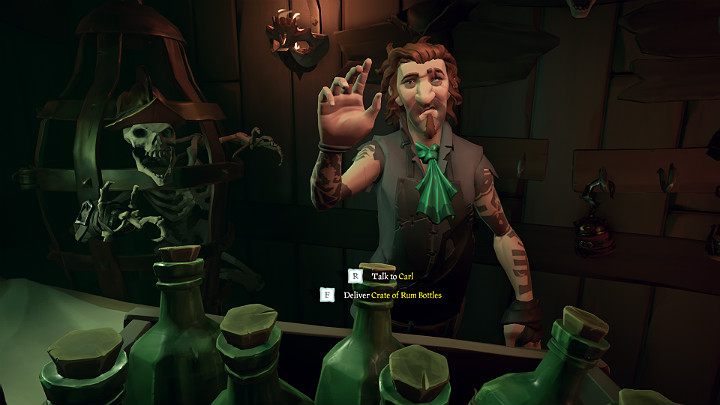 Order of Souls is another of the main commercial companies available in Sea of Thieves. It is a completely different type of trading company than gold-seekers and merchants, as they reward the player with gold and reputation points for taking down a target listed in the wanted list and acquiring a special item - Bounty Skull. 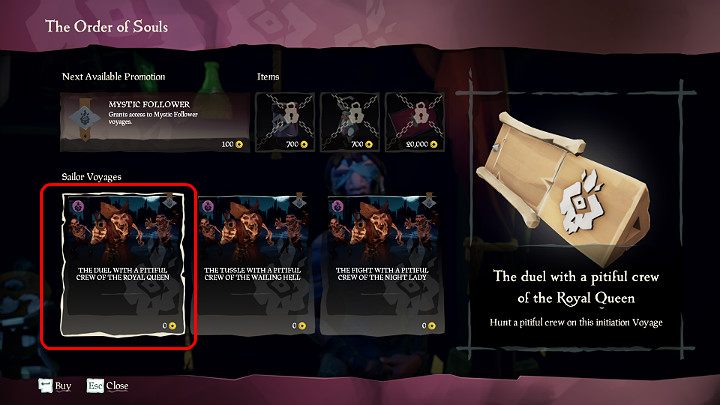 Go to a representative of the Order of Souls trading company, who you'll find at each port in a purple tent, and then accept one of the free contracts. The task must of course be activated on the captain's table inside the ship. 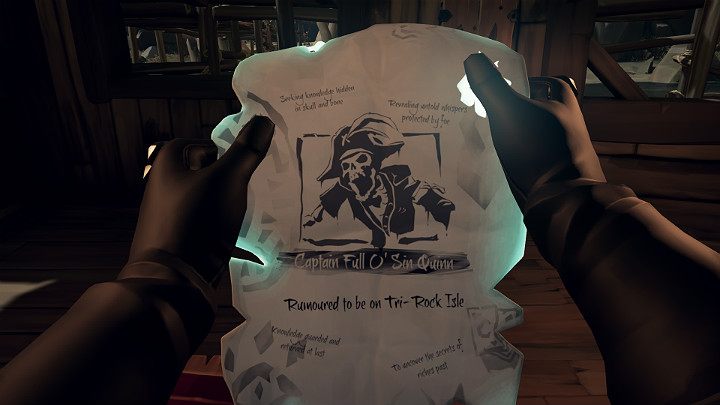 When the task is activated, a new item will appear in your equipment - a wanted letter. From the information contained in the letter, you'll learn about what target has to be eliminated and where to find him. In our case, it's Captain Full O'Sin Quinn, who was last seen at Tri-Rock Isle. 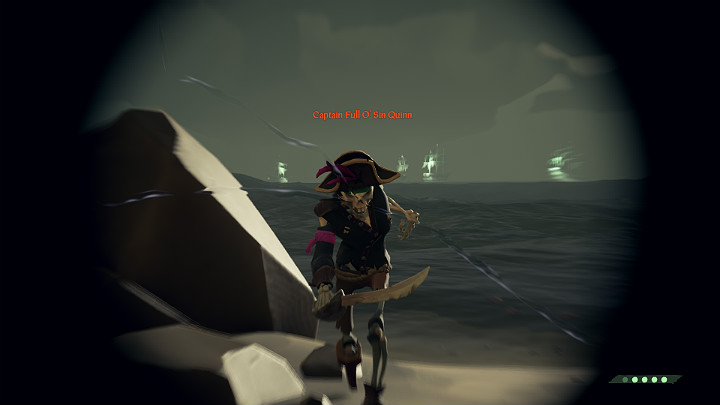 Using the tips contained in the wanted letter, we travel to the location and locate the target. Now all you have to do is eliminate the opponent and take the Bounty Skull, which you can then sell to a representative of the Order of Souls trading company for gold coins and reputation points.

Skeleton captains are much stronger than their regular counterparts. They have access to better quality weapons and have more health. Moreover, skeleton captains have a few bananas on them that they can use to heal a total of 100 health points.

If you want to get extra gold coins and boost your reputation with another trading company available in Sea of Thieves, called The Hunter's Call, you'll need to start hunting and learn how to fish. For more information on fishing, hunting and cooking, see separate chapters of this guide. 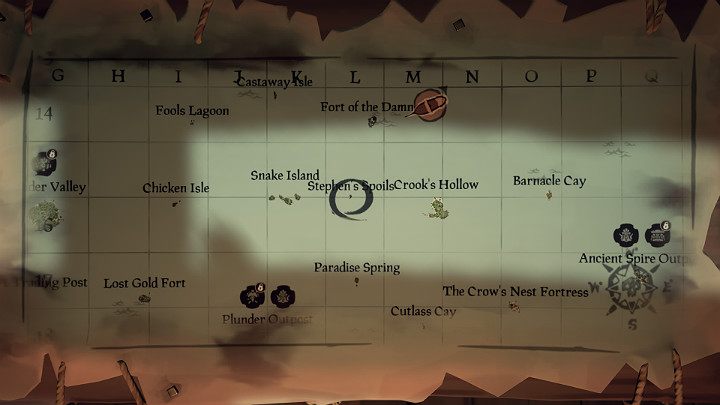 Fish and meat cannot be sold in ordinary shops or at representatives of other trading companies. To gain additional gold and reputation for selling meat and fish, players will have to go to The Hunter's Call outposts, called Seaposts. These outposts are much smaller than isle ports, and usually, there is only one merchant present.

The map above is marked with "Stephen's Spoils", a location where you can find the chairman of The Hunter's Call trading company - Merrick. 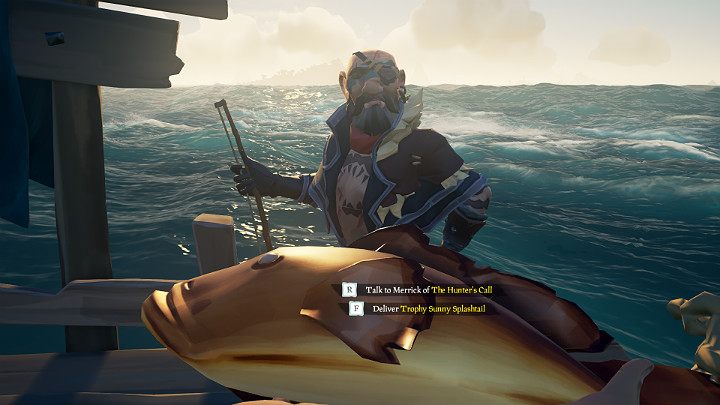 You can bring the caught fish or roasted meat to The Hunter's Call representative or to Merrick himself and resell it for a certain amount of gold and reputation points. It is worth noting here that cooked meat is worth far more than raw meat. For Burnt Meat, the reward is much smaller.

After completing your first jobs with Gold Hoarders, The Merchant Alliance, Order of Souls, and The Hunter's Call, you are ready to take on more jobs and explore the world of Sea of Thieves on your own! 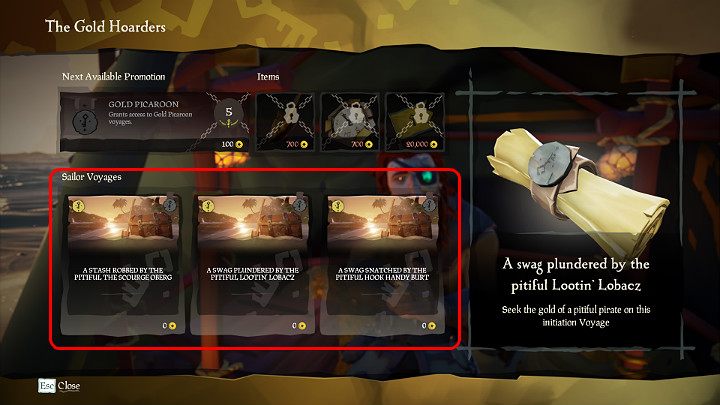 Free orders from representatives of all trading companies in Sea of Thieves will be available until you buy the next version of contracts. This will allow you to quickly collect gold, which you can then spend on more dangerous assignments or additional items, such as clothes.

After buying the next level of assignments, free jobs will no longer be available. Higher-level assignments will cost 20 gold, and further ones, respectively more. 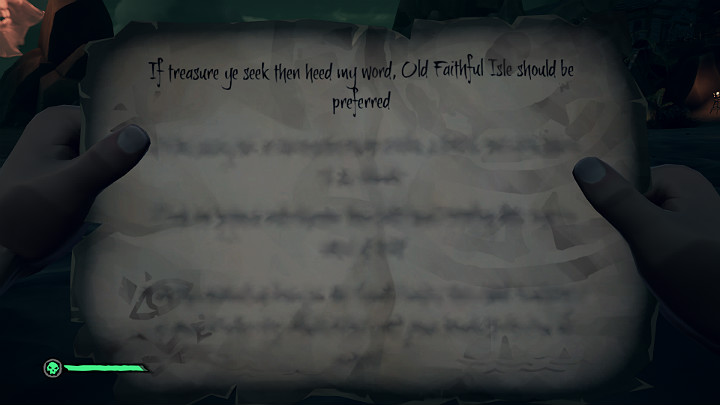 While exploring the many islands available in Sea of Thieves, you will also come across Ashen Guardian's Notes (Riddle Map) leading to much more valuable treasures. An envelope containing the letter can be obtained, for example, after killing the Ashen Guardian. In the text of the letter, you will first see the first clue, and the rest of the message will only be revealed when you arrive at a specific location. For more information on the Ashen Guardian's Notes and how to find Ashen Chest, see a separate section of this guide. 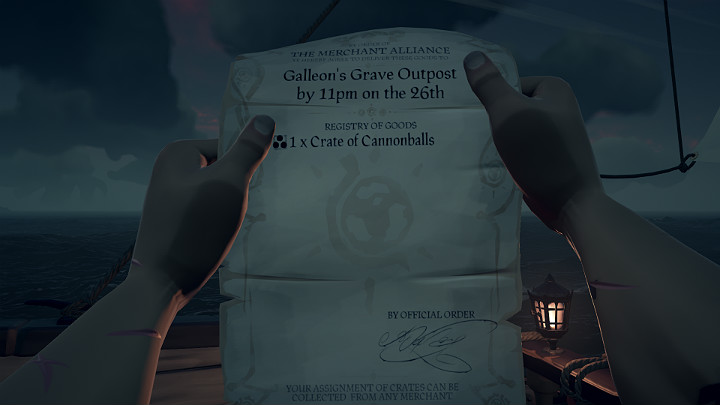 Looking into barrels for supplies, you can also come across special assignments from The Merchant Alliance. These orders have a certain expiration date and in the image above you can see that after accepting this task you have to deliver 1 box of cannonballs (50 pieces) to Galleon's Grave Outpost by 11 pm of the same day. In this case, it is sufficient to contact one of the representatives of the trading company to obtain an empty cannonball case, which must then be filled and delivered to the indicated address. 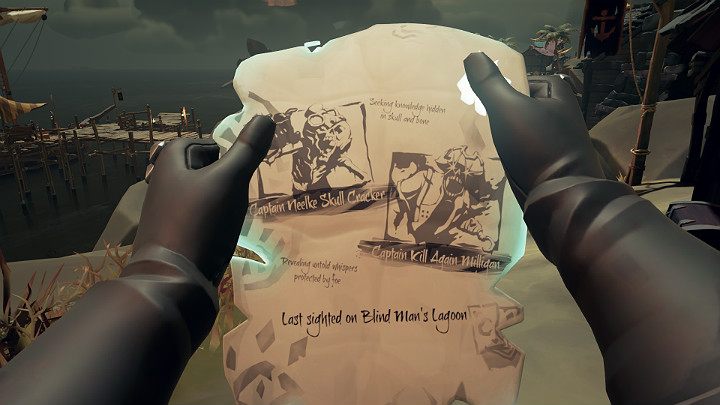 Another type of additional assignments that you can find when searching supply barrels are special wanted letters. These orders, of course, are related to Order of Souls trading company and that is where you have to deliver proof of the task (Bounty Skull) to receive the reward.

Remember to replenish your supplies before each trip. There are many dangers lurking in the open waters of Sea of Thieves - treacherous weather, as well as other pirate ships that will take every opportunity to sink competitors and take their loot. Always be ready for literally anything!