Arrrr! Remember the day when you ALMOST became captain Jack Sparrow - probably because you had yet to read our guide to Sea of Thieves. Here we'll teach you how to sail, hunt for treasures, fight on land and sea, and all the other skills required to become a legendary pirate. 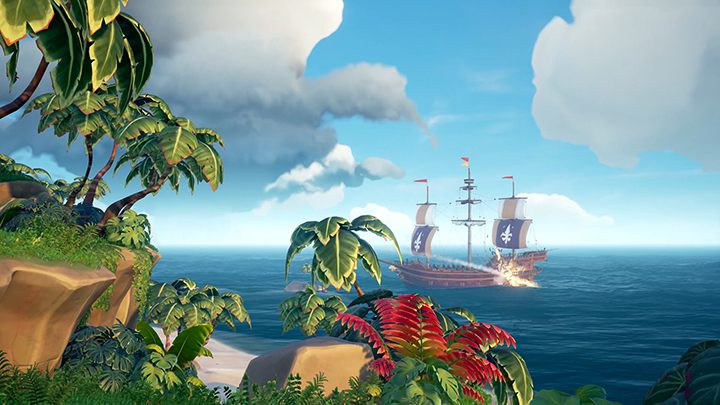 The guide to Sea of Thieves contains all the information necessary to travel and survive in the game world while achieving the game's main objective - to become a legendary pirate, and eventually a legendary captain. The guide includes the descriptions of in-game quest-giving factions and their quests. You will learn what types of tasks there are, the mechanics of sailing, combat on sea and land, fishing and hunting, tucking, hunting for mermaid statues, and what to look out for when exploring the ocean and surrounding islands.

Before you start your adventure in Sea of Thieves, you should study the basic tips that will increase your chance of surviving in the open sea, make it easier to play solo and in a team, and help you acquire more treasures. These tips are mainly aimed at novice players.

We answer basic questions about Sea of Thieves, e.g. whether the game is free, whether it is on Steam, whether you can play on PlayStation 4, or whether there are microtransactions in the game. This FAQ chapter is a small compendium of knowledge about the game and changes introduced by new patches.

Is Sea of Thieves free to play?

Unfortunately, Sea of Thieves is not a free game. Sea of Thieves can be purchased from the Microsoft Store and the Steam platform or played with an Xbox Game Pass or Xbox Live Gold subscription.

Is Sea of Thieves available on Steam?

Yes, Sea of Thieves is available on Steam from June 2020 so all players who want to become a pirate can buy the game on Steam and jump into the game!

Can I play Sea of Thieves on PlayStation 4?

Unfortunately, no. The game Sea of Thieves is only available for PCs running Windows 10 and Xbox One consoles. There is no official information regarding whether SoT will be available to play on Sony's console.

Are there microtransactions in Sea of Thieves?

Yes, microtransactions are present. Ancient Coins are used for shopping inside the game, with them you can buy cosmetic items and unlock other game content.

Is there a cross-play feature in Sea of Thieves?

At First, Sea of Thieves was only available on Windows 10 and Xbox One and you could play with players from both of these platforms. When the game came to Steam, Microsoft announced that this platform would also support cross-play.

Below are the official minimum and recommended PC system requirements for Sea of Thieves. Before you start playing, check whether you'll need to reduce the graphics settings for the FPS to be at a playable level.

About Sea Of Thieves Guide

More About Sea of Thieves

If you have a PC and your friend has a PS4, that doesn't mean you can't play together. There are multiplayer crossplay games that you can still play even if you have different hardware. Here's a list of cross-platform games for 2022.

The most anticipated games of 2017 – Gamepressure picks