The guide below contains 10 practical tips for Satisfactory, which will help you get acquainted with all of the basic mechanisms of the game. Satisfactory is an unusual game in which you gather resources and build factories on an uncharted planet. Your task is to gather as many resources and products and send them to the orbit. To do that, you need to study the planet that surrounds you, and learn to use the available resources. The guide contains various useful tips regarding the most important aspects of the game.

Beginning - In this chapter, you'll receive a few tips that will prove to be useful during initial playthroughs. What items and resources gather first? How to find and excavate iron ore? How to heal yourself and fight opponents?

Controls list - The game uses a classic control scheme, but there are a few keys and commands that prove to be very useful during the game.

Enemy wildlife -The planet on which you operate is a very hostile environment which you'll need to face sooner or later in order to develop your factory. This part of the guide is dedicated to most common dangers that you can encounter.

Base location - You'll quickly learn that a right location for the base is a must. Choosing a suitable location can help you in expanding your base.

Production lines - This is the element of the game that you'll spend most of your time on. You'll learn how build simple and advanced production lines that will help you create various products.

Electricity - Almost any object in game works thanks to electricity. Aside from expanding the power grid, you'll learn how to fix generators and re-establish the power supply in case of malfunction.

Exploration - As the time progresses, you'll unlock new technologies and resources. The next step is exploration of the planet, to get more data and build additional bases. Aside from that, the planet holds many secrets, such as wrecks of ships from previous expeditions.

Achievements and discoveries - To increase your options and productivity, you'll need new technologies, achievements, and discoveries. All of that is needed to expand the base and to build Space Elevator.

Building factories - The final part of the guide contains a bunch of tips regarding factory building, using foundations and creating objects on smaller spaces.

The default controls of Satisfactory are as follows:

Space - jump / in vehicles: brake / crafting table: hold to create items and objects (instead of LMB)

You can assign more objects from the building menu to shortcuts to speed up the time needed to create a factory and to construct more often used buildings. When you open up the building menu (by pressing Q) click the cursor on the object/building that you use often, then press the number. From now on, the chosen structure will be available under the chosen button. 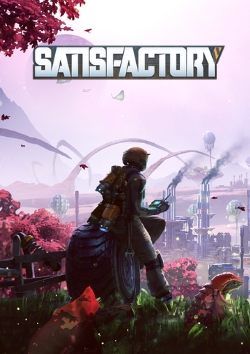 While playing in Satisfactory on the PC platform we observe the action from the first person's perspective (FPP). The creators put at our disposal an open world of thirty square kilometers; exploration is an important element of the game, because only in this way can we find raw materials for building buildings, constructing various devices and building production lines.

Due to the fact that the goods produced by us increase in size over time, the prerequisite for success is the constant expansion of the complex and providing it with appropriately efficient power sources. As the factory becomes a real moloch, vehicles (like buggies, trucks and trains) as well as hanging sidewalks or hills that make it easier to navigate and move between distant points are becoming more and more important.

However, the matter can be complicated by the local fauna. Although among the creatures searching the planet's surface there is no shortage of peaceful creatures suitable for tame, while traversing the wilderness we often come across aggressive, overgrown predators; during a meeting with one of them we usually have nothing else left to do but to use a firearm.