One of the longer early-game missions in Saints Row is Observe and Report. Our guide contains its detailed walkthrough, explaining how to fight the gang members, jump across vehicles and defeat the convoy's leader - a mini-boss with a yellow armor bar. 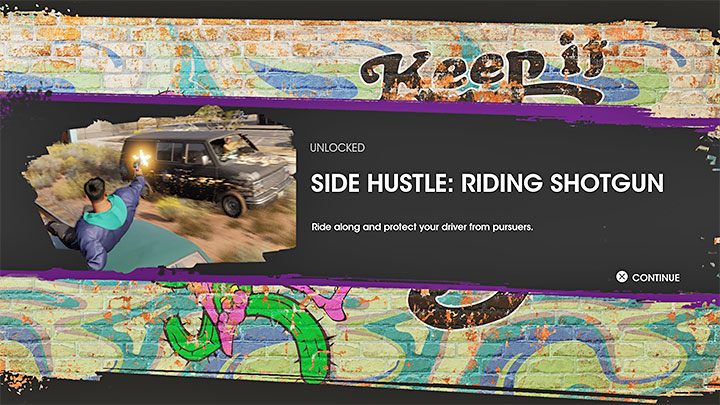 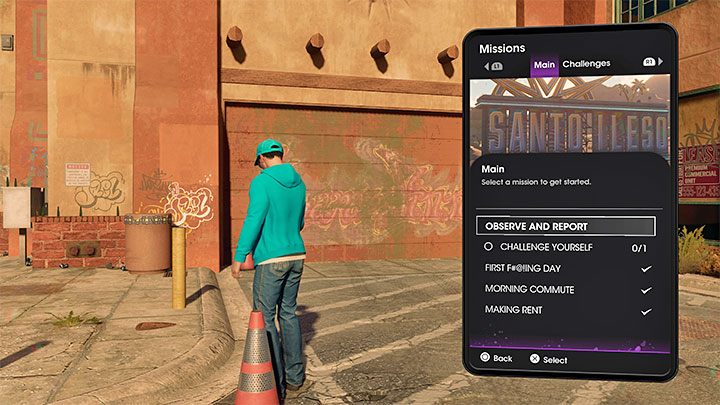 This mission, like most other story missions, has to be started manually from your phone.

You must view your smartphone and enter the Missions app. The described mission is the only one available right now, but later on you may have several main missions to choose from and you'll be able to play through them in any order you wish. 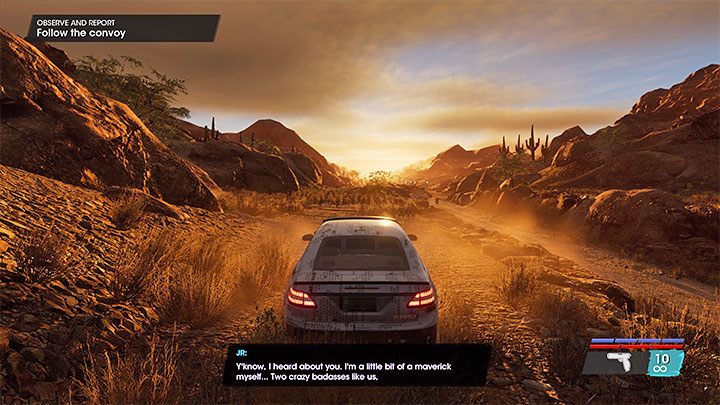 You must go meet Gwen at Rojas Desert North. Use any vehicle to get there, either from your garage or stolen.

After the cutscene you'll start following the convoy along a strictly defined path you cannot stray from. Listen to the dialogue before the action proper starts. 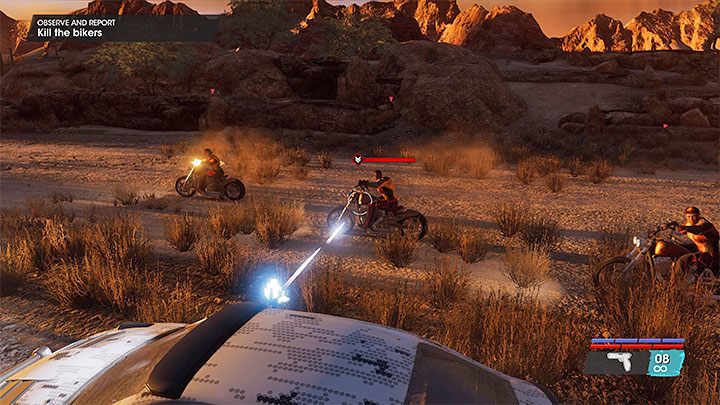 You'll be tasked to fire at the bikes straying from the convoy. You can fire while driving, though you'll be limited to your sidearms.

Jump on the truck 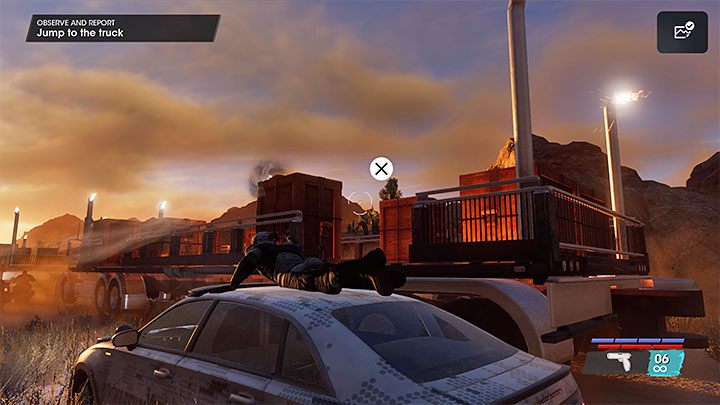 After a while you'll have to climb onto the vehicle's roof (hold Triangle/Y on the controller). You'll now have more freedom to act.

Wait for the vehicle to get near one of the trucks's trailer and jump onto it (X/A on the controller). You must dispatch the enemies on the trailer. Use Takedowns when necessary and hide from enemy fire behind crates. 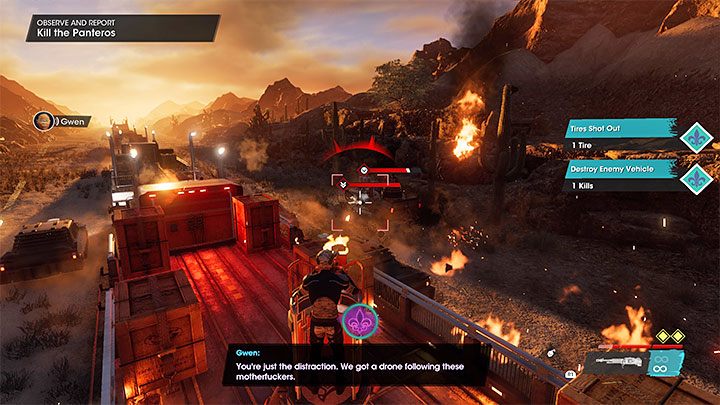 There's a turret on the trailer - use it. Start shooting at the enemy vehicles and the bikes near the truck. You don't need to worry about ammo, so just keep blasting away.

Jump to the Panteros car 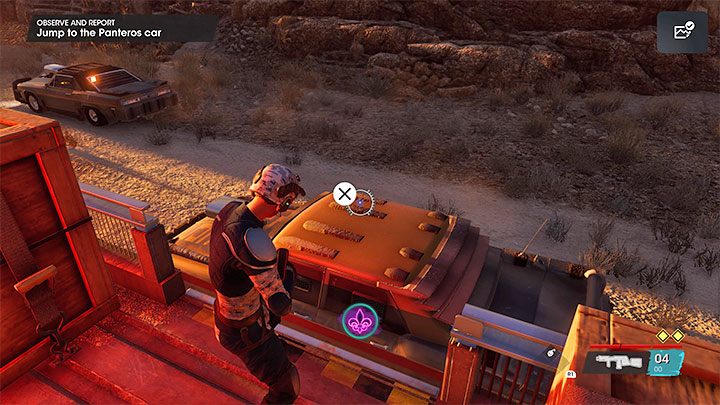 Get out of the turret once you acquire a new mission objective. Approach the trailer's edge and jump onto the vehicle's roof. You can fire away from here as well.

You'll have to jump across vehicles - each time this happens, wait for the jump icon to appear. 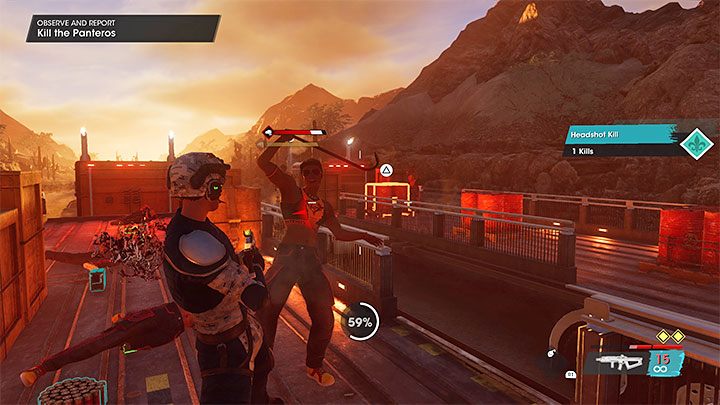 Once you reach a new trailer you'll need to dispatch the enemies on it as well (use Takedowns when necessary). Quickshots will let you detonate explosives on an adjacent trailer, eliminating the enemies faster. 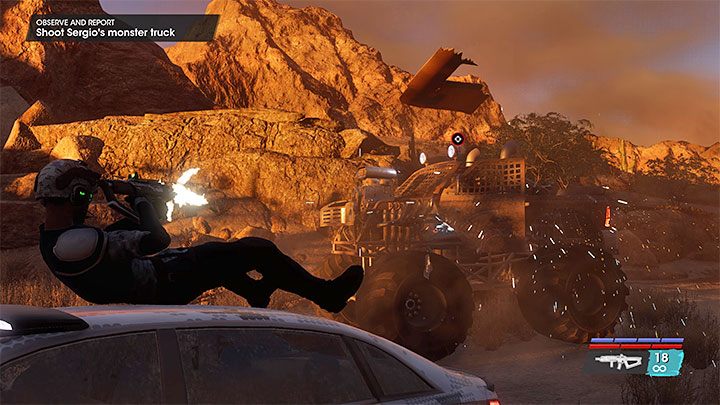 Eventually you'll trigger a cutscene. Sergio will appear, driving a monster truck. Start firing away at the huge vehicle, aiming for the hood. Gradually, you'll be damaging it more and more.

Advance up the convoy 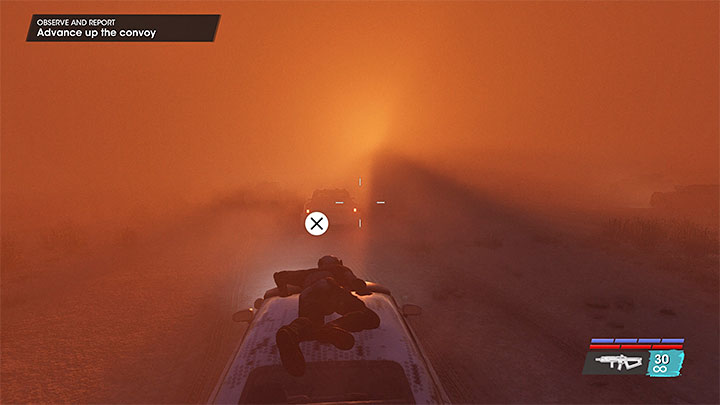 You'll drive into a sandstorm, though the strategy remains the same - fire at the enemies from the roof and jump across the vehicles when it's safe to do so. This will let you make your way up to the front of the convoy. 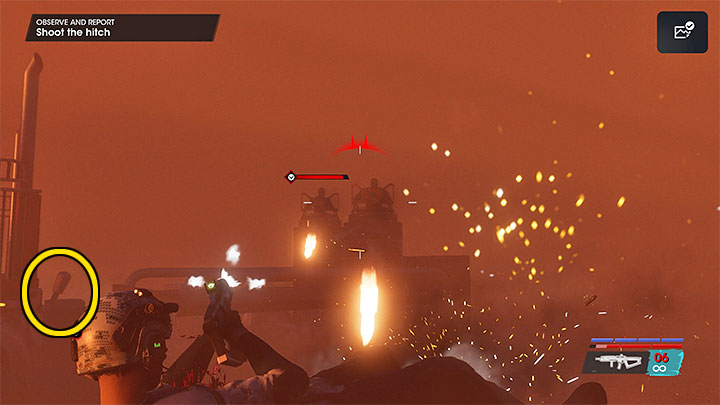 At some point you'll find yourself next to a trailer filled with turrets. Instead of killing the gunners, shoot the hitch marked in the picture above. This will detach the trailer, eliminating the threat. 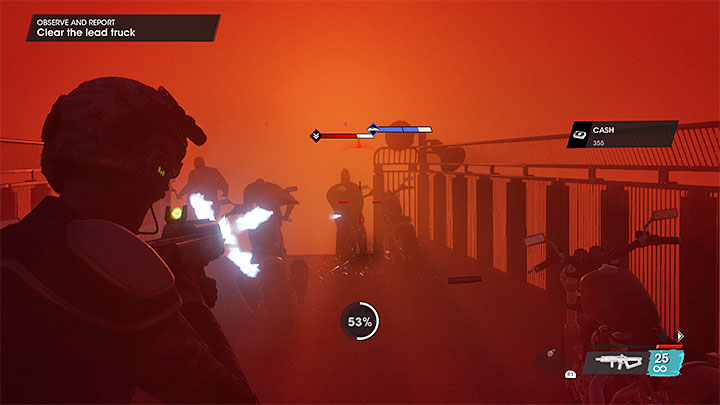 There's one more trailer ahead of you, with one more enemy encounter. Again, hide from enemy fire behind crates and use takedowns when low on health.

Reach the truck and jump on its roof to trigger a cutscene, during which you'll struggle against the driver.

The final fight against the Los Panteros features your first enemy with a yellow armor bar. 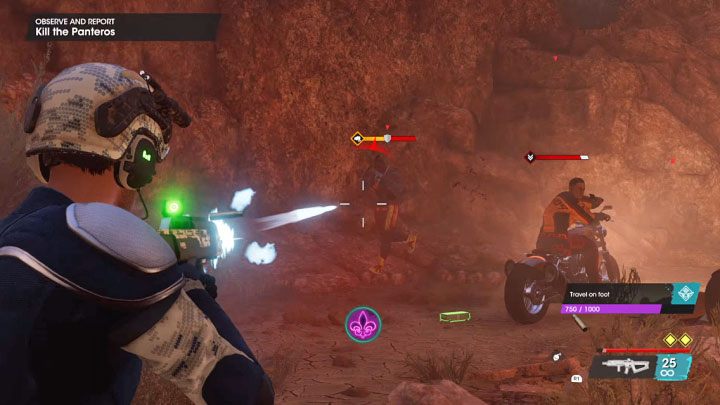 Start firing away at him with your best weaponry. Run around the arena, don't let the enemy get too close.

You shouldn't ignore the regular gang members, but the elite enemy is your priority. Remember to dodge when necessary. 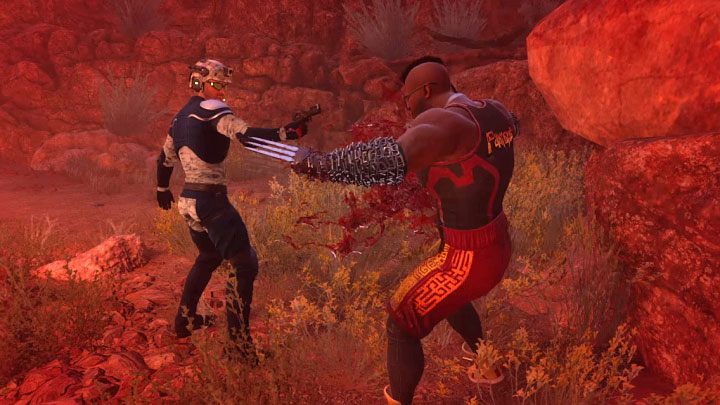 Once you drain the elite foe's armor bar you can execute him with a Takedown (he was immune to them before) or gun him down (aim for the head). This triggers a cutscene and ends the mission.