Some time has passed. Brian and Joshua went to see mysterious professor Simon. He has left the civilization and lived in snowy Alaska wilderness. Unfortunately, when they reached the spot, Joshua ate some strange kind of berries and lost his memory. It wasn't the best moment because he just was about to tell the password to enter the professor's possession. They call it bad luck.

Brian took Joshua to a deserted hut nearby. He got firewood out of box, sat Joshua by it and decided to find a cure for his sick friend. 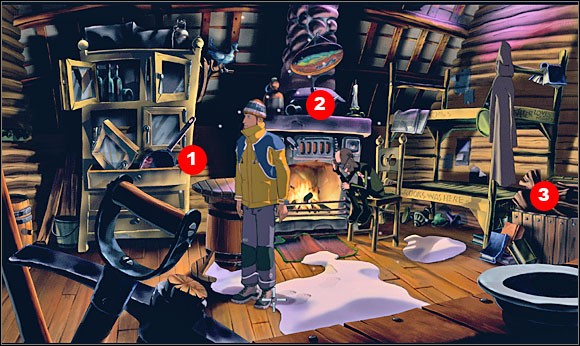 There was no point talking with Joshua, he was in his own world at the moment. Brian took a firewood from the bin at the foot of the bunk bed (#3), a knife from the drawer (#1), an oil dispenser from the fireplace mantle (#2) and an empty gas tank from the corner. He left the shelter. 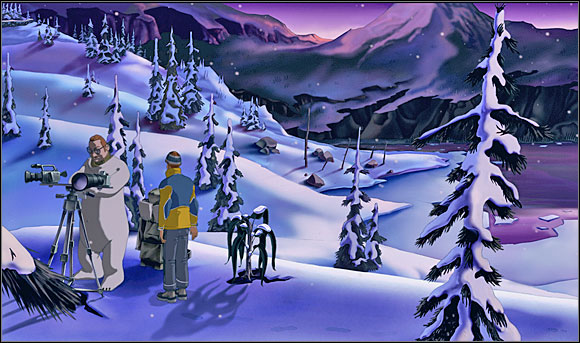 Continuing along the path, he got to a man dressed in bear fur. After a short talk he found out that the man's name was Ben Wazowski and he was a polar bear researcher. He told Brian how these animals fish with their claws and showed him a collection of bear essences. He also told he knew professor Simon and - what's most important - that the cure for memory loss was eating a raw salmon. Luckily, there were many of them in the river nearby.

After returning to the hut, Brian tried to talk with Joshua but he didn't respond until he heard about the destruction of planet Trantor. The shock therapy worked. Now Brian needed to convince him to eat a raw fish. Joshua didn't want to hear about it, but he admitted that he has Japanese blood in him. Somehow, Brian managed to persuade him to eat a sushi.