Brian ran to Kai. Surfer said that bringing the parrot back to life was possible but first he needed to find his grandfather hut located somewhere north on the island. Besides, Koala mislaid his bogus leg and he cannot walk without it.

There was no problem with finding the bogus leg. Brian looked at the sand turtle and searched its environs using the metal detector. Finding the hut wasn't so easy.

Then he came up with a strange idea. There was no point for him to search the building by himself - he doesn't know the jungle, he doesn't know the island. He might get lost in the thicket. It's better to get some help from the army and its equipment. How could he made them to do it? While they won't listen to the civilian, they will surely follow the order of the colonel. 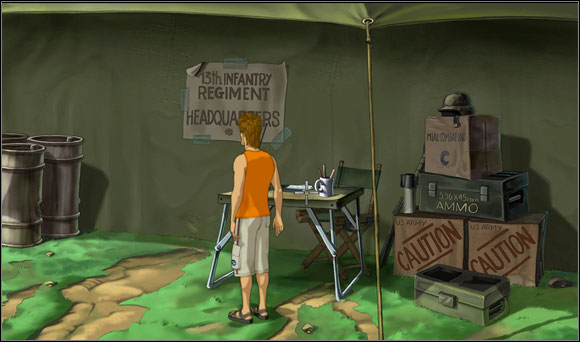 Brian went toward the camp and by the entrance he communicated he wanted to see the commander. Soon he was in his tent and taking advantage of the moment, he quickly wrote a note in Leslie's notebook that he should localize a single hut somewhere northwest on the island.

His visit at the colonel's place was short but after he found himself by the checkpoint, he asked for it again. He waited a bit overhearing a conversation between Leslie and his father. At the end of it, attentive son told colonel the GPS coordinates of the hut. Brian noted them, entered the tent and finished talking with the soldier as fast as he could.

Wondering how to gain a GPS, Brian reached O'Connor. Zachariah admitted that he lost it while running after some kid. Brian quickly put two and two together - he was talking about Koala and his "video game console". 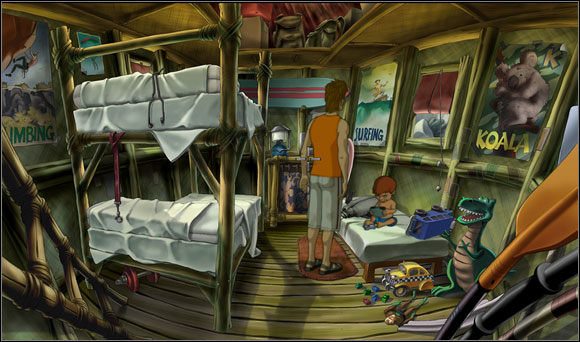 He went to the Knife's hut and looked at the boy's toy. Indeed, it was the GPS. Unfortunately, kid didn't want to cooperate and Brian had to use the lemur. During the struggle, GPS fell out the window. Brian picked it up and used the coordinates on it. Soon he was right before the witch doctor hut. 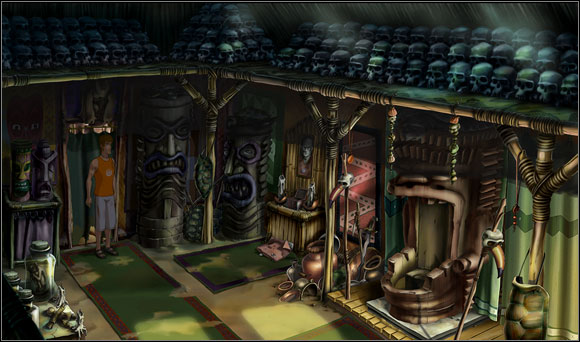 He entered the hut and look around the fascinating interior. He noticed a throne, a shrine and turtle shells. He took one of them. Then he returned to Kai, gave him his bogus leg and talked about hut he found. They went there together.

To prepare the ritual, they needed one more element - Grimarium, the book of spells that belonged to the Kai's grandfather. The old surfer decided to visit the astral area and ask the shaman about it. Meanwhile, he told Brian to look around. Brian also found out that the book had a metal cover and should be with person's body. 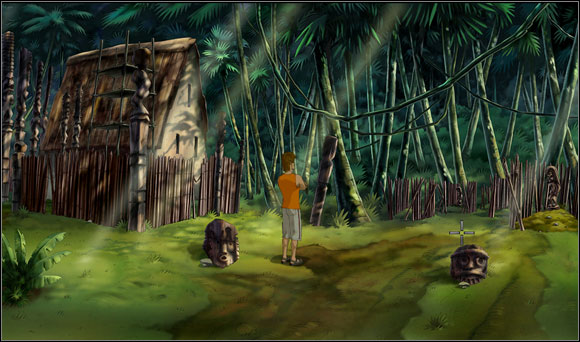 Right to the hut there was a small cemetery. Brian used the metal detector and found the old shaman grave. Using the turtle shell as a shovel, he dig the tomb and get the book. After a little while, Aolani was flying as always.

When Lokelani saw the parrot, she smiled and willingly turned Brian into professor Pignon. Our hero in disguise went to see O'Connor who took him to the military camp. Meanwhile, the real professor appeared. Luckily, the girl took care of him.