Brian decided to find a way to leave the island first and then look for Gina, so they can sail away together. Since the plane was no longer available, he needed to find another mean of transport. For now, there was only a Knife's motorboat but he won't do away with his training equipment. 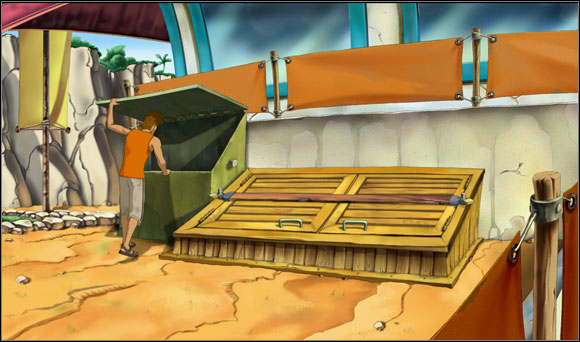 On the left side of the entrance to the main building he found a blocked trap to the basement. There was a green container next to it where he picked up a practically whole stick of butter. 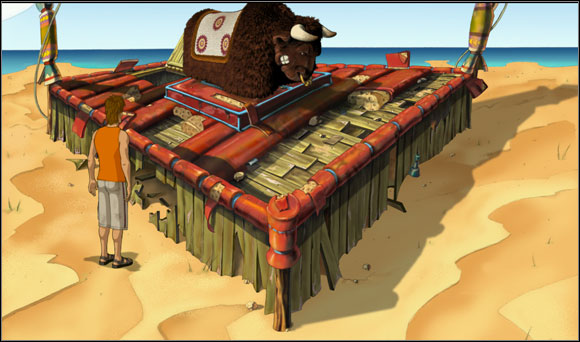 Then he came across a bucking bronco standing on the beach. Unfortunately, it seemed to be broken. On the left side there was a trap door leading to the machinery. Brian tried to get inside, but he didn't succeed. 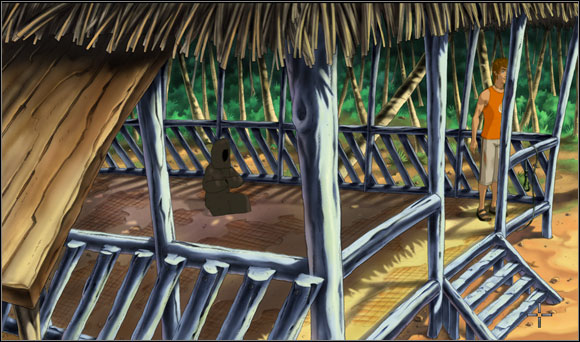 Then he took off to the surfers hut. He found a steel cable with a hook near the stairs but didn't manage to get it. He took a good look and found out that its other end was attached to the root of a tree, so he greased the cable with the butter to loosen it a little.

In front of the hut there was a sitting monk Lokelani mentioned. He wasn't talking but he was making a signs with his head. Brian decided to give him the board and the chalk to speed up the conversation.

Unfortunately, when it was getting really interesting and the monk mentioned something about the aliens, Brian run out of chalk. He needed to find another piece of it. He went to Lokelani but she said there was no more chalk left at the bar.

Behind the main building of the visitor's centre, Brian noticed a back of some car. When he came closer, he realized there was a military hummer and a soldier who didn't look very bright. 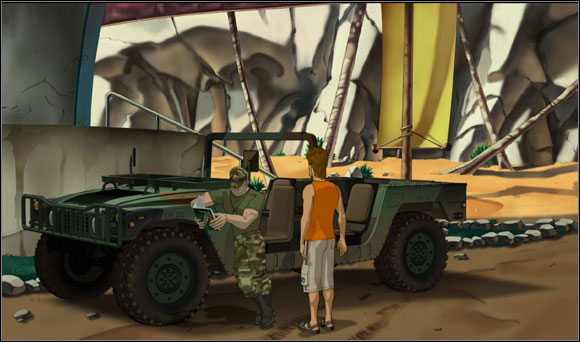 The soldier introduced himself as Zachariah O'Connor. Seeing Brian's clothes and behavior he thought that he was his commander in disguise who came to check how his inferior follows the orders. Brian used this misunderstanding to interrogate O'Connor. His task was to wait for professor Pignon and take him to the camp. He had his picture just in case of problems with identifying the passenger. Before he joined the army, O'Connor worked as a lumber jack. His previous profession is still useful when it comes to climbing fast the trees. He also told Brian how to make a chalk. He just needed to combine the arabic gum with the gypsum.

The powder was able to replace the gypsum and the cigar holder shape was good enough to be used as a form. Brian just needed to get a binding material. He took some sap from the palm tree nearby. The chalk was ready.

Then he got back to Lokelani and asked her about the bucking bronco. It turned out that it was broken from some time and need to be repaired. The girl also mentioned that it takes the good balance and the ability to foresight to ride on it. Brian recalled that these are the same skills that the ones required to be a good surfer. Maybe if he manage to repair the bucking bronco, Knife could use it as a training machine instead of the motorboat?

Brian got to the monk and gave him the chalk. The conversation could be continued. It turned out that the mysterious person is Joshua himself (Brian helped him last time to contact the aliens). He admitted that he has been sent by them and that he waited for a certain professor Simon. Brian proposed a deal. He will help Joshua to find the professor and in return Joshua will fix the bucking bronco.

When they reached the machine, Brian gave Joshua the toolbox and the butter that could be used as a grease. Now he needed to gain the source of power to the bronco. 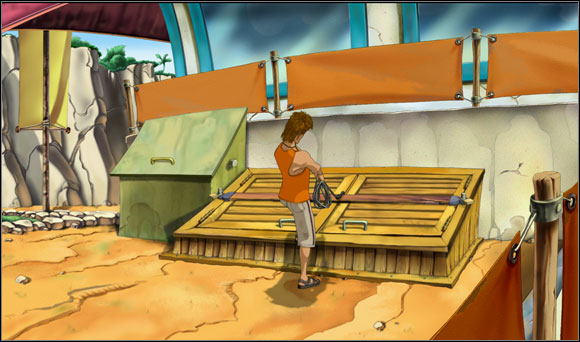 All switches were surely in the blocked basement. Brian had to get inside it. He used the steel cable on the board of the basement entrance and tried to break it away. Unfortunately, he was too weak, so he needed some help.

He went to see O'Connor and asked him to climb up the tree. But the soldier refused saying that he has no rope. Luckily, Brian could give him one and Zachariah granted his request.

Seizing the opportunity, Brian took the photo of Pignon from the book ex-lumber jack was reading. Then he used the hummer to break away the board blocking the entrance to the basement. Fortunately, O'Connor was a bit hard of hearing and seeing so Brian managed to complete the job before he went down the tree. 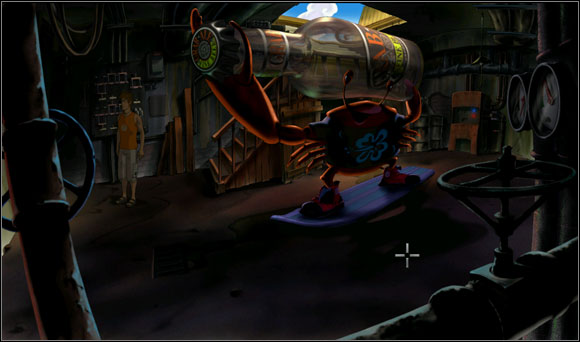 The basement was open but there was dark inside. Brian turned on the lamp hanging down from the ceiling but it didn't make a big difference. In a room under the stairs, behind the giant crab, he found a metal detector. He looked at the circuit-breaker panel and worked on it a little. 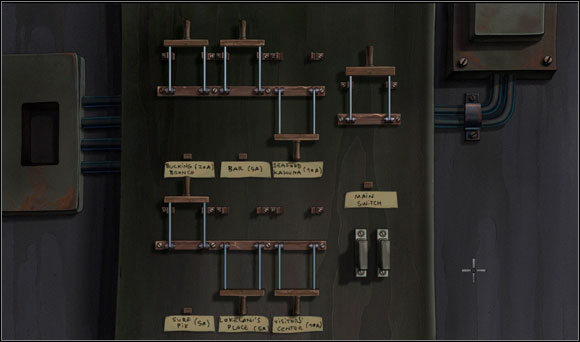 In the meantime Joshua fixed the bucking bronco. Brian tried it - it worked well! Before he went to tell the good news to Knife, he picked up the butter. Maybe it will be useful again? 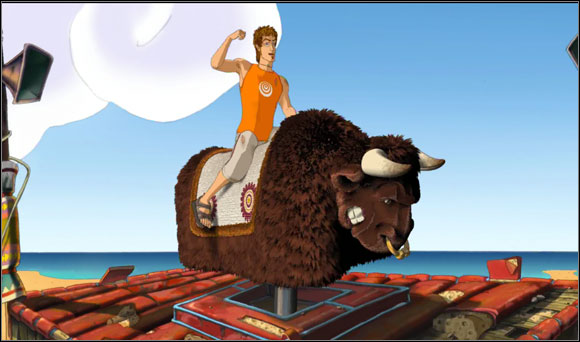 Now Knife had nothing against borrowing the motorboat to Brian. The transport was ready, so it's time to find Gina. Brian needed to get somehow to the military camp.