This page of the game guide contains a walkthrough of chapter 1 of Road 96. We described how to safely escape to the other side and thus save the first character. 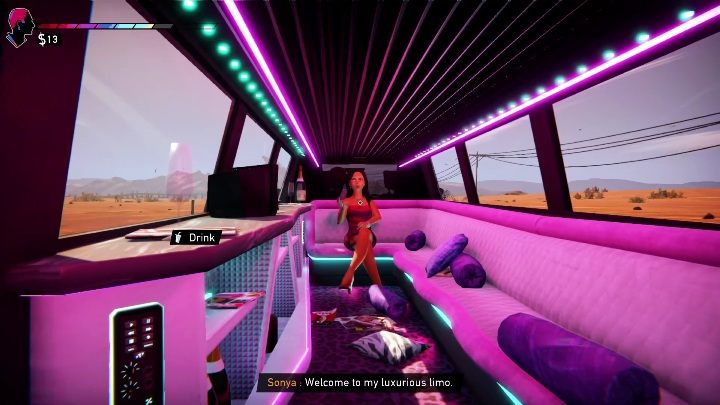 The story begins in a limousine. Sonya tells you about herself, her work and, most importantly, gives you a big lift. Once you arrive at your destination, you can have a drink to restore your stamina. You'll talk to the woman about work and make some important first choices. 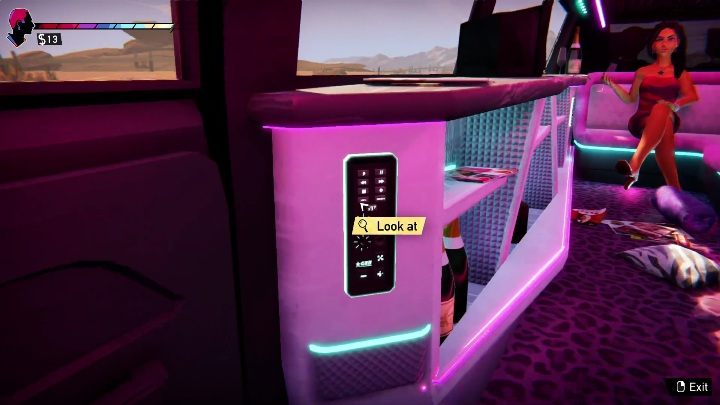 Listen to what the woman has to say. For example, knowing how to open the sunroof is important. It allows you to look around the area. Sonya will then use it to threaten people around her. Make sure that the conversation with her goes well and without incident. The woman won't throw you out of the limousine and will gladly drive you to a safe place. 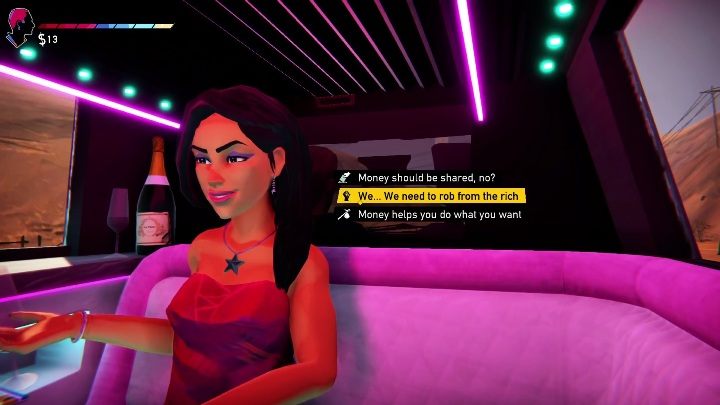 The labels on the in-game choices are key. These have a direct impact on the ending. There are three available paths: elections, revolution and escape. These are marked with special icons displayed in the screenshot above. We have described the endings and how to get them on a separate page of the guide. 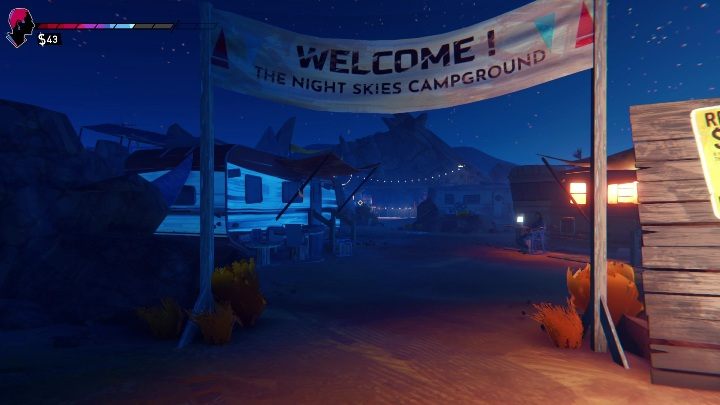 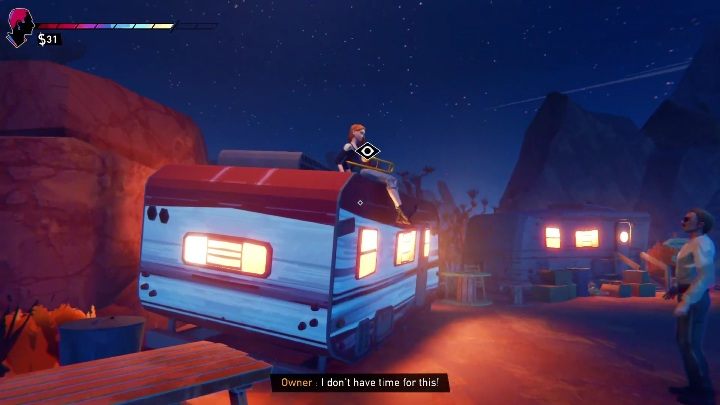 If the conversation with the limousine driver goes well, she will drive you to safety. Here you will meet several new characters, with Zoe being the most important. She is sitting on one of the trailers with her trumpet in her hands. The first thing you should do is simply talk to her to learn more about her and find out how she got there. 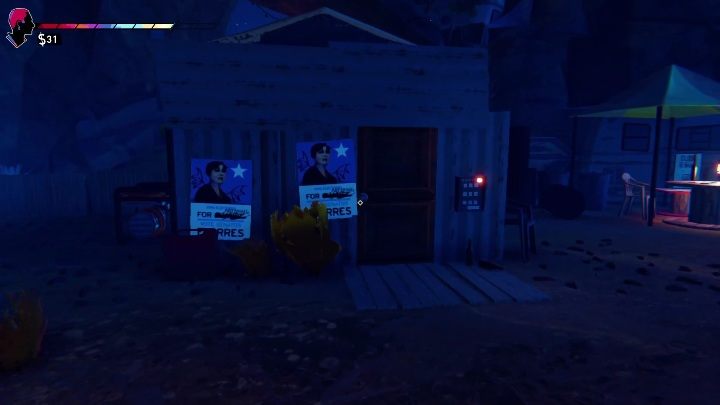 In the area, you'll find a small locked room. To open it, you'll either need the hacking skill, which you don't have yet, or you can enter the code. The code is 4166. Inside you will find money that can help you escape. 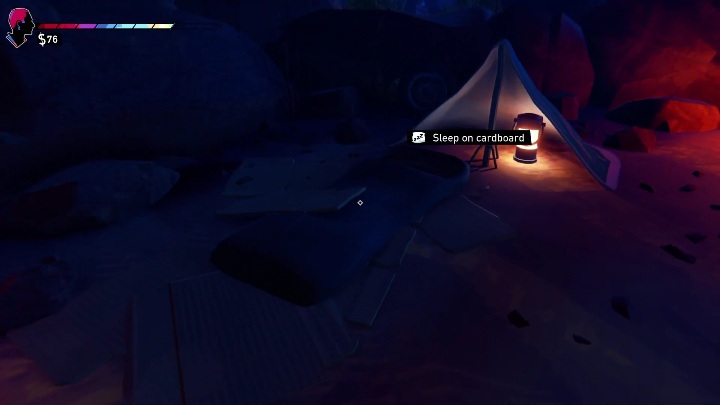 You need to sleep in order to advance the story. There's not enough room in the trailer, but you can safely sleep on the mattress near the small light source. Do so only after you're certain you've seen everything important in the area. 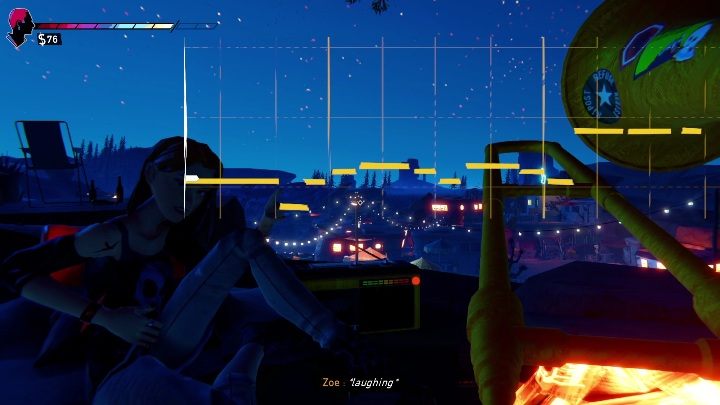 During the night, Zoe will wake you up, because she wants to play the trumpet with you. Your job is to keep the conversation going in the breaks between playing the instrument. Playing the trumpet isn't complicated. You simply need to move and connect the white bar with the yellow ones as often as possible. 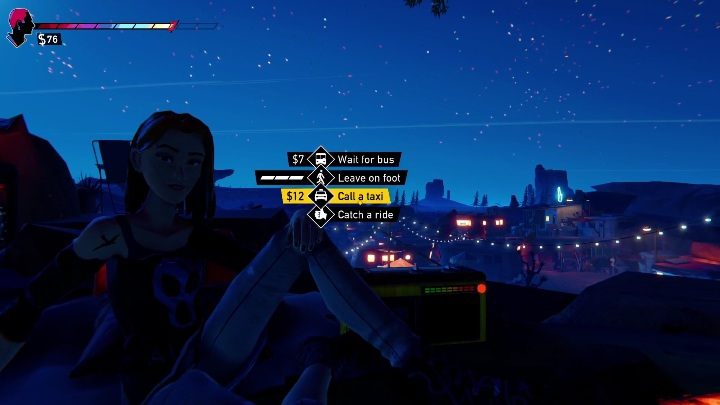 Once the nighttime concert is over, you have to decide what's next. You have the choice of taking a cab, a bus, walking or hitching a ride. If you select the final option, you will encounter an important new character. 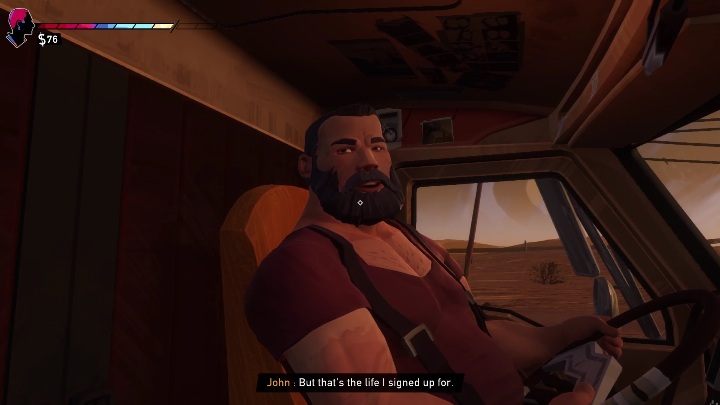 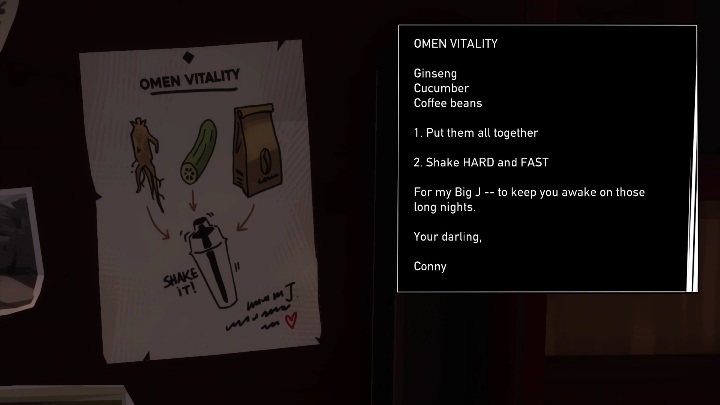 If you choose to hitch a ride, you will encounter a new character. John is a truck driver who will be happy to help you. During your conversation, you can make certain critical decisions, which are reflected by the 3 previously explained icons.

Besides continuing the conversation, your task will be to rest and make the man a cocktail. This way, you'll earn your first skill. You simply need to collect 3 ingredients and then mix them. In the meantime, you have the option to rob the man, but it's not recommended. This will affect your relationship and John's attitude toward the other characters. It's best to remain on friendly terms and he'll assist you on more than one occasion.

After making the cocktail, you can choose if you want to continue on your own, or if John should drive you to the next safe place. 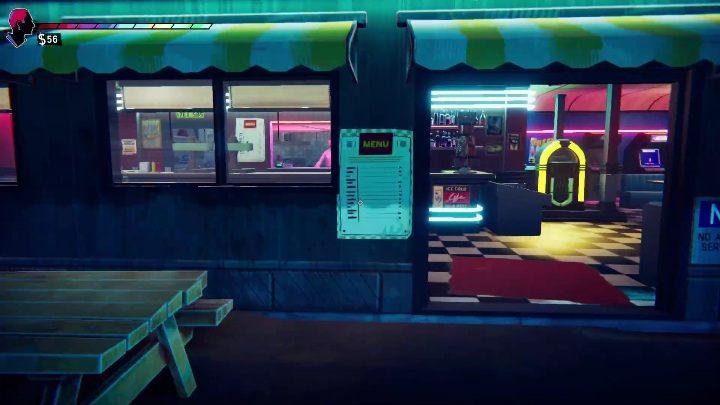 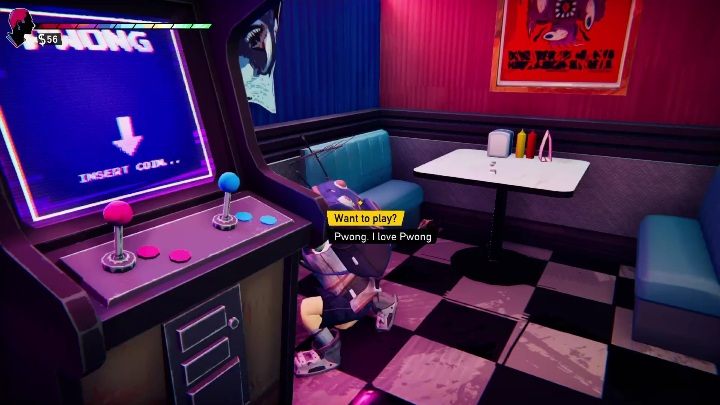 The next safe place is a roadside bar. Once there, you can talk to customers, drink, eat and meet Alex. This encounter is essential, because the boy will teach you how to hack. 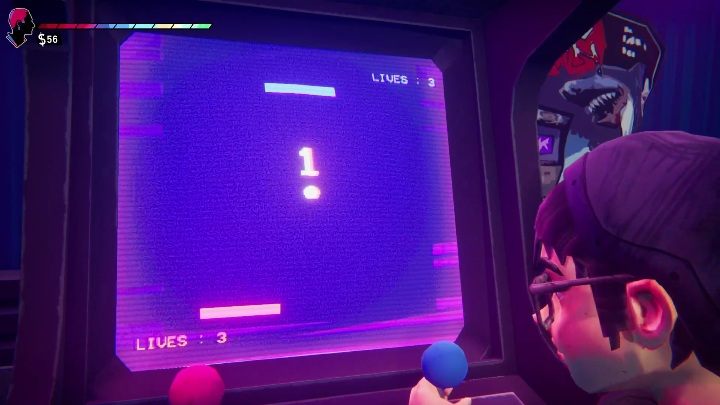 First, however, you'll have to play with him. The result doesn't matter. However, it's important to be friendly towards Alex. It's best to avoid arguing with him and in return, he will help you learn hacking and even aid the other characters you will control the future. 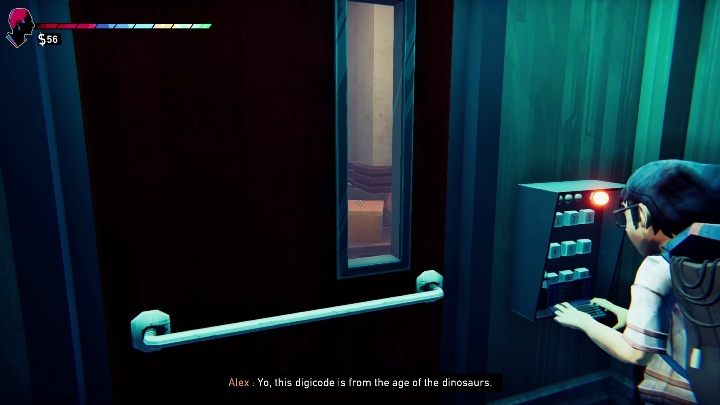 After talking to Alex and restoring your stamina bar, you will head to the storage room next to the bar. Alex will open the door, and you can ask him to teach you a new skill. Hacking will come in handy many times during the game.

In the storage room, you'll find a lot of money along with car keys. After completing this task, it's time continue your escape. You can choose which path to take. The keys you've found can be used to steal someone's car. 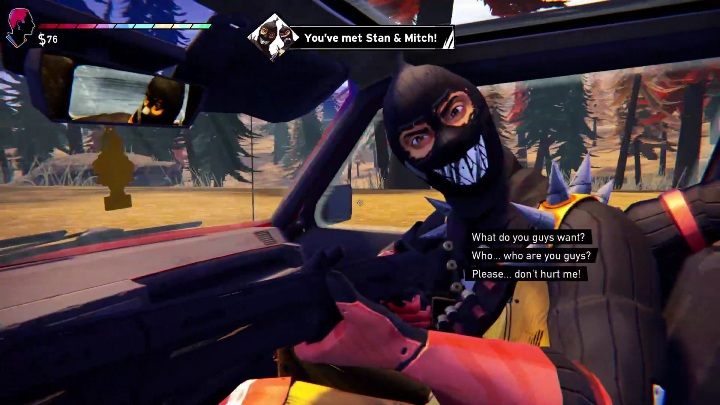 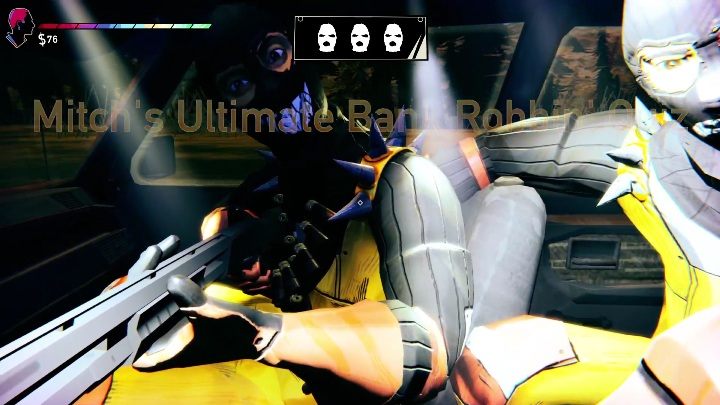 If you choose to steal a car, you're certain to encounter two more key figures on your way. Stan and Mitch are thieves who will appear during each character's story. They will quiz you in the car. If you fail to answer correctly, you'll be thrown out of the car and robbed. The correct answers are: 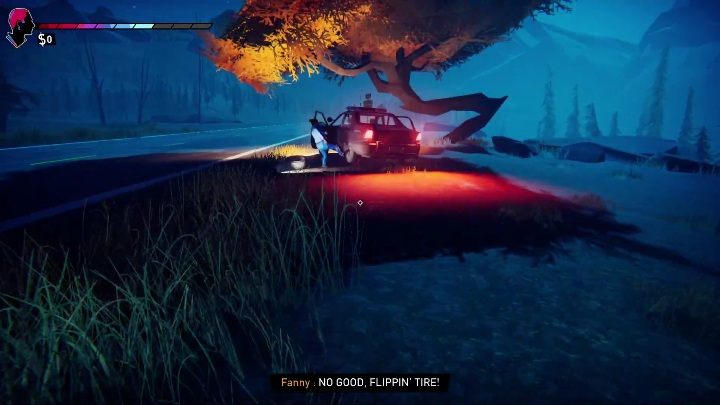 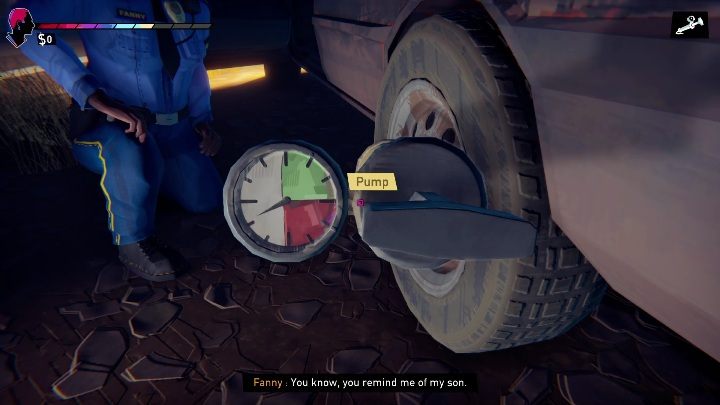 Fanny the police officer is the next character you'll encounter on your path. It's worth assisting her in replacing the wheel. This task simply entails unscrewing the old wheel, replacing it, and correctly inflating it. After attaching the wheel, you'll be able to have a conversation with the woman. She won't help you further down the road. Your task will be to continue on foot on your own. 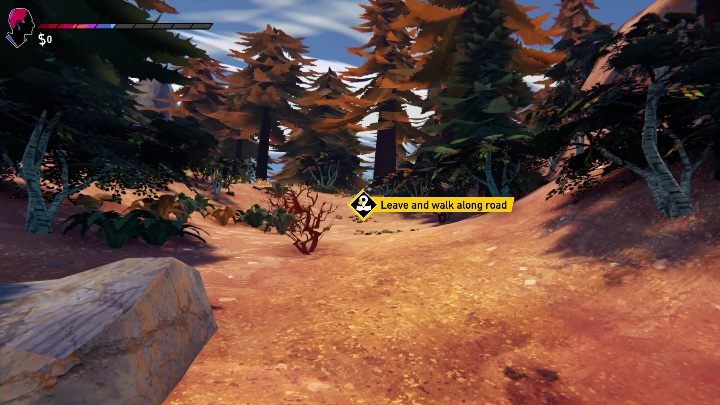 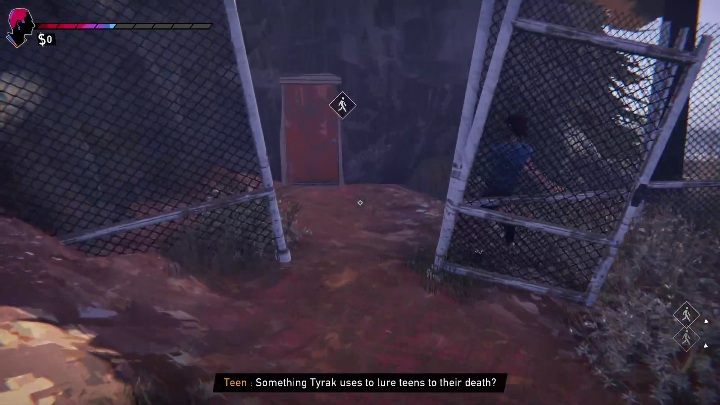 You will reach a location that has all the characters. You'll go through the safe forest to the spot where you'll have to choose the escape route. There are numerous characters there, both new and old. Some of them will be willing to help you, but everything has a price. For this route, it's a good idea to take the path that requires hacking. The hacking skill is enough to break through the tunnels. All you have to do along the way is open the doors, and nothing will happen to you. This way, you'll finally reach the freedom you've desired.

This site is not associated with and/or endorsed by the Ravenscourt or DigixArt Studio. All logos and images are copyrighted by their respective owners.