Rise of Nations: Rise of Legends Game Guide by gamepressure.com

All the enemy attacks in this phase go through his main base on this side of the bridge (3). You can't deal with it yet, as it's defended by a gigantic cannon called The Hammer. Avoiding its shots is possible (just run away from the mark on the ground when it's warming up), but it's devastating to do that when engaged in a battle.

There are 3 mines controlled by Clockworked Miners on the map (4). It's a great idea to buy, not storm them. This way you get to keep the Miners, who are much more efficient than common ones.

Another location worth mentioning is the neutral city to the East (5). A great spot to strike with an army of Destroyers. There are two ammo depots near it. Use your air units to destroy them (focus the fire on these buildings!), and the resulting explosions will take out the enemy units that are defending them.

Its quite possibile that the enemy will throw a large army to retaliate after that. If you don't feel strong enough to defend the (5) city, let it go. It's not that important for now.

When you have enough troops, attack the main enemy base on this side of the bridge (3). Hammer will make it difficult for you, but hey, you've got 9 mines and 3 cities under your command! When you claim the city, Doge will destroy the bridge. Doesn't matter. Just get rid of everything the enemy has on this side and wait before your forces are restored to full strength.

Now it's time to get rid of that Hammer thingy. It's guarded by a Leviathan. If you don't know what it is, try to remember the Monte Laguna boss. Juggernauts, Destroyers, Super Clockwork Men - we're talking BIG here, so don't save on units. When you defeat the Leviathan, Giacomo will be able to use his Augmentation to take it over. Reclaim the Hammer and use it to destroy the base to the northwest (7), thus completing one of the bonus quests. Now all you have to do is to destroy the main city (8). It will be nothing but pleasure with this kind of "upper hand" you now have. 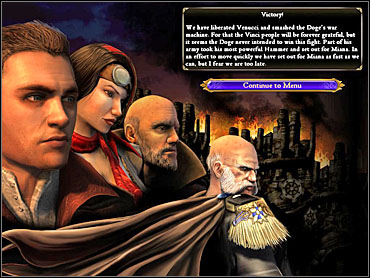 This site is not associated with and/or endorsed by the Microsoft or Big Huge Games. All logos and images are copyrighted by their respective owners.