How to unlock the quest: Automatically after completing the main quest "Ready for the Island". 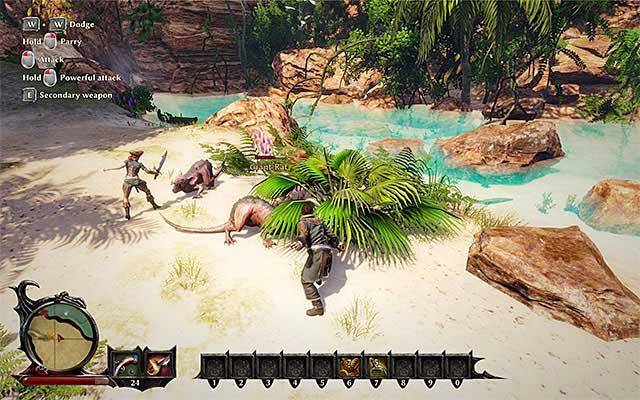 Overgrown rats aren't any threat for you.

Note - Patty has joined your party. During your journey to the temple you can count on various cutscenes with her, as well as an assistance in battle, which she will surely provide.

The quest begins on the beach of Crab Coast (point 2 on the map). After listening to the conversation with Patty, you can start exploring the coast or depart in the direction of the temple. If you've chosen the latter, go along the pathway located to the West of your starting location (point 2a on the map). At the very beginning of your journey you will encounter Giant Rats. They are easy to get rid of, and you will earn 50 Glory Points for killing each of them.

Note - distancing from the path leading to the temple will activate a cutscene of a conversation with Patty. She will try to convince you to focus solely on the main quest, but you can ignore her and start exploring the Crab Coast at this very moment (you will be able to in the latter part of the game as well). 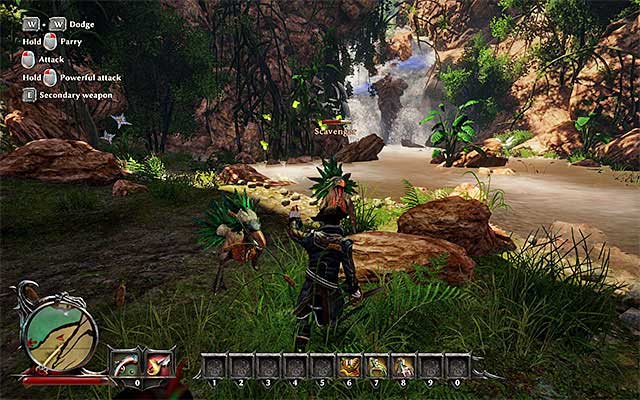 Use your dodges to prevent yourself from taking any unnecessary damage while fighting Scavengers.

As soon as you enter the jungle, the first chapter of the game will officially start and you will be immediately attacked by a group of Scavengers. Those large birds are extremely agile. As they can easily interrupt your attacks, don't even bother to use your charged ones. Instead, try to rely on parrying their attacks, dodging and the usage of ranged weaponry. Each Scavenger killed is worth 50 Glory Points. After killing them, yet another cutscene with Patty will activate. She will suggest to examine the body of a pirate near the river, which is connected with an optional quest "Race Against the Unknown Opponent".

Note - the description of the optional quest mentioned above can be find in a separate section of this guide. It's worth to take care of it immediately, as the further parts of this quest will be completed along the path to the temple. 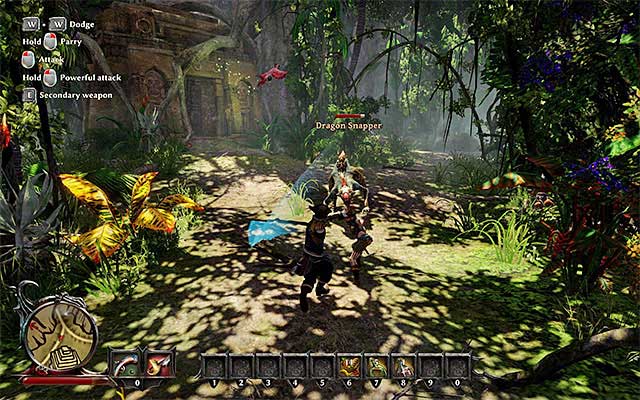 The giant monster can be either avoided or killed.

Continue your journey along the main path, leading to the temple. The main character will stumble upon a huge monster called Dragon Snapper. If you want to kill this beast, you will complete an optional quest "Take Out The Dangerous Carnivore". If you don't want to risk it, you can simply avoid the monster using your sprint. It is recommended to take care of the foe (each enemy of that type will give you 200 Glory Points), as it's worth to explore the area and complete various tasks connected with "Race Against an Unknown Opponent" optional quest. 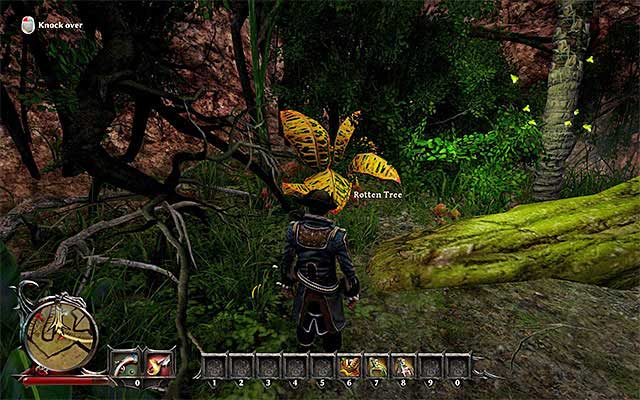 Felling the tree is fortunately not a problem.

If, according to the given suggestion, you've eliminated the enemy, it's worth to take an interest in a template located nearby (point 2b on the map). In accordance to Patty's suggestion, approach the temple's closed doors and pull the lever to open them. Inside you will find a chest with Gold, Crystal Torch and Book. Leave the temple and depart to the West. After reaching a blocked passageway (point 2c on the map) approach a Rotten Tree and press the button shown on the screen to cut it down. You can now cross the makeshift bridge. 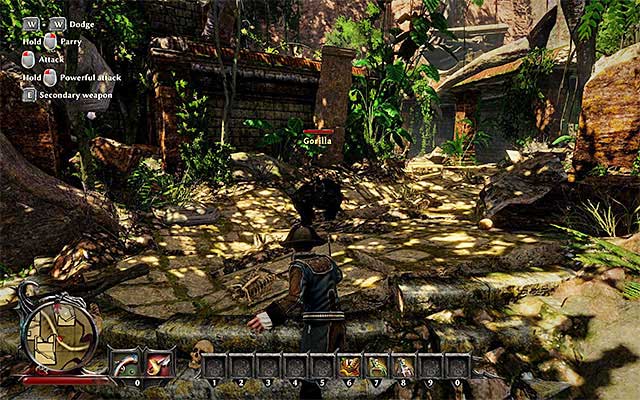 Try not to lose too much of your energy while fighting with the Gorilla.

The heroes will soon reach a destroyed village (point 2d on the map). You will have to defeat quite a difficult foe, called Gorilla, here. If it is possible, try to attack the enemy from a safe distance, using your pistol. Otherwise, rely on parry and dodge. The good news is that you will be awarded 200 Glory Points after killing the beast. You can now examine the rest of the village (watch out for the Ghouls and Monkeys) and collect a lot of different treasures (a powerful Rain of Fire spell, for instance), or go to the North without exploring anything. 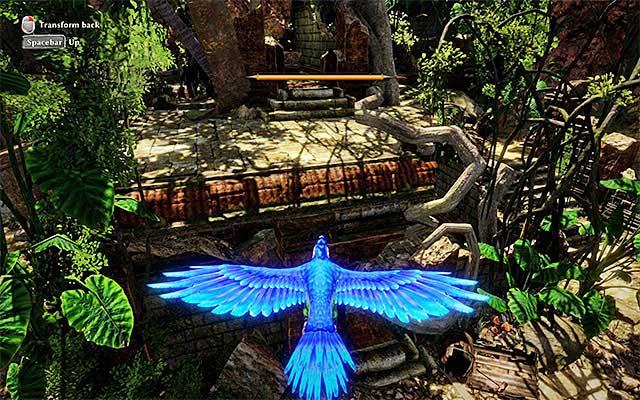 After reaching the Northern part of the village, Patty will suggest you to complete the next part of the tutorial. This time, the plan is to reach a seemingly inaccessible top shelf (point 2e on the map). You can do this by activating the Parrot Flight spell - the scroll needed to cast it can be found in one of the nearby chests. Drag the scroll on the quickbar, activate it and, after turning yourself into a parrot, try to get to the shelf (shown on the above picture). The mentioned shelf contains the next Parrot Flight scroll and a chest with a Sparkling Gold Ring, Rum and 116 pieces of Gold. Additionally, you will be awarded 100 Glory Points for trying out the spell. 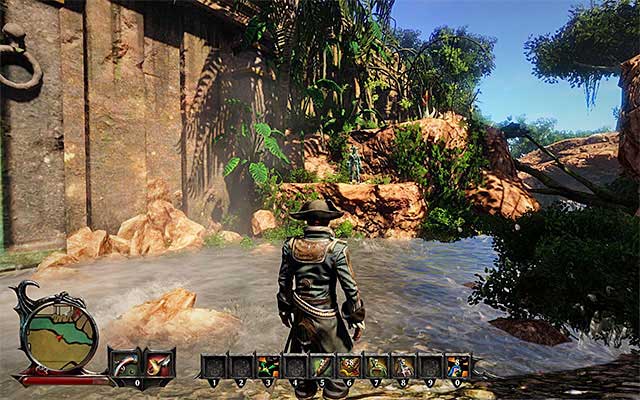 The place in which you will start climbing.

Get back to Patty and continue your journey to the North. The nearby glade (point 2f on the map) is occupied by three Pirates - confronting them is a part of an optional quest "Race Against an Unknown Opponent". After dealing with the pirates, listen to the conversation with Patty, concerning the discovery of the temple's entrance (you will have to do it alone, unfortunately). Depart to North-East, arriving at a shelf, on which, once more, a ghost of a pirate will appear (point 2g on the map). You will have to climb yourself up, until you reach the side entrance to the temple.

Note - there's a campfire in the pirates' encampment, and you can use it too cook your freshly acquired raw meat.

Note - Patty will leave your party for a short time, so don't forget that in the upcoming battles you will have to deal with the enemies on your own. 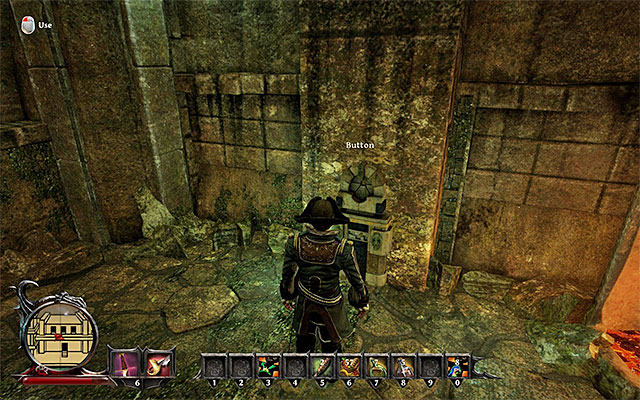 Brace yourself, because as soon as you enter the temple, the Nameless Hero will be attacked by a group of Giant Rats. Don't let the enemies to corner you and heal your character whenever its needed. In the next chamber you will stumble upon a dead pirate - pick up the Throwing Daggers lying near him. Soon after this, you will arrive at a hall with mechanism controlling the drawbridge (200 Glory Points). Press the button (100 Glory Points; point 2h on the map) and go outside to let Patty rejoin your party. 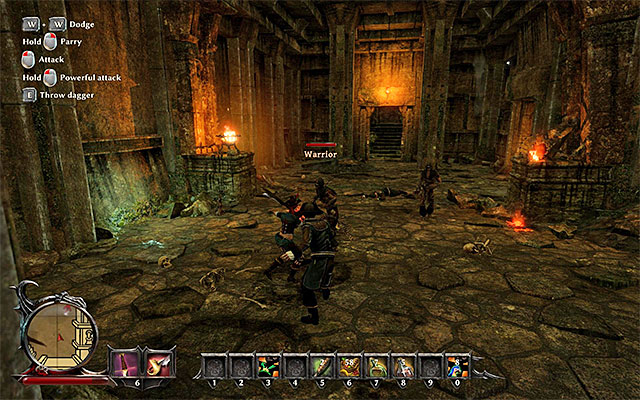 Kill all the enemy warriors.

Begin your march in the direction of the North temple hall (100 Glory Points). You will encounter a group of Warriors here, but they aren't stronger than the pirates you've met a while ago. Each enemy you defeat will award you with 100 Glory Points - if you defeat all of them you will be given 100 Glory Points as well. You can spend some time exploring the surrounding rooms and corridors of the temple (most of them alone, with the help of Patty, unfortunately), or continue with your journey to the North. 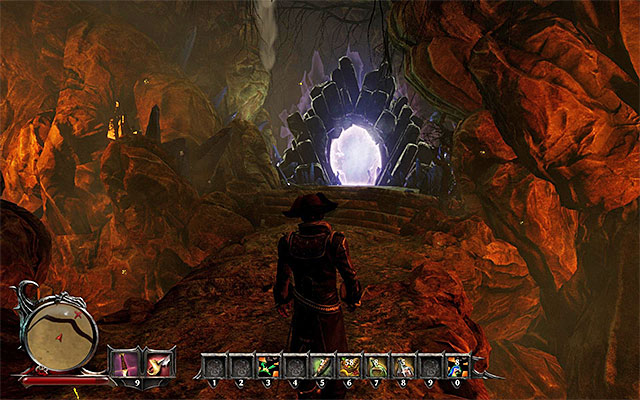 After reaching the new bridge (point 2i on the map), a group of Hellhounds will block your way - defeating them is a part of an optional quest "Creatures from Hell". After dealing with the devil's spawn, continue going to the North. A linear path will lead you to a portal and the quest will be completed.

Note - Patty will now permanently leave your party. This isn't the only serious change, as you will lose all your character's attributes and abilities upon death.