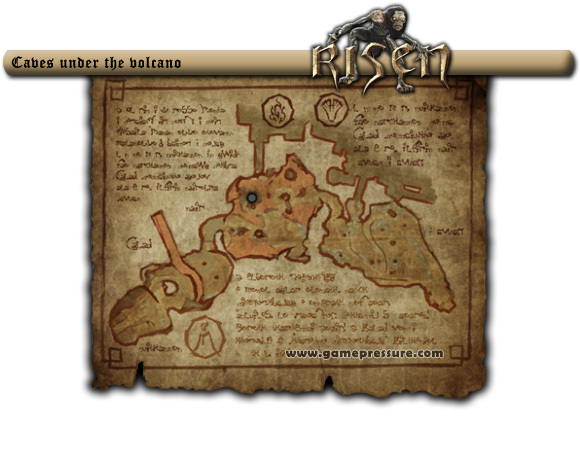 Get to the spot marked on the map. If you have the levitation spell/scroll, head to the door below. If not - use a spell or distance weapon to move the windlass on the other side, cross the bridge and take the levitation scroll from the chest. Break the magical barrier and go inside.

Look out for the trap in the floor. On the left there is a small room with a golden bust. Stand before the raised bars and use telekinesis on the bust of a king.

On the opposite side of the room, search for a corridor ending with a thin wall. Break through it using the pickaxe. The room with scorpions is important, but you can go further (2 x Ashbeast) and take the transformation scroll from the locked chest. In the room with the scorpions, use nautilus transformation and go through the hole in the wall.

Defeat one of the Saurians and take the bust of a king from his body. Take a sapphire and a small ruby from the chest and place the bust on the pedestal. Exit through the opened door and use the telekinesis trick again.

After placing the busts on the pedestals in the main hall, a new room will open with the helm you're searching for inside. One of the priests defending it will have a western volcano cave teleportation stone.

Before you leave the temple using one of the teleportation stones, it's worth to look up and with some jumping and a little help from levitation, get to the thin wall by the green-lit, broken stairs fragment. Inside you will find a locked chest with a good titan scepter. Break through the next wall. Look out for the trapdoor and take a rare diamond from the locked chest.

Going further will lead you to a lever opening a passage to the lava-filled cave you already know.