The battle against Nemesis occurs at the end of the exploration of the third biome of the planet Atropos. Nemesis is the third boss that you will have to face in Returnal. Ophion has three health bars, so the fight against this opponent was divided into three phases and each of them is distinguished by the boss using unique attack combinations.

The arena where you fight Nemesis floats in the air and you can fall off its edges. 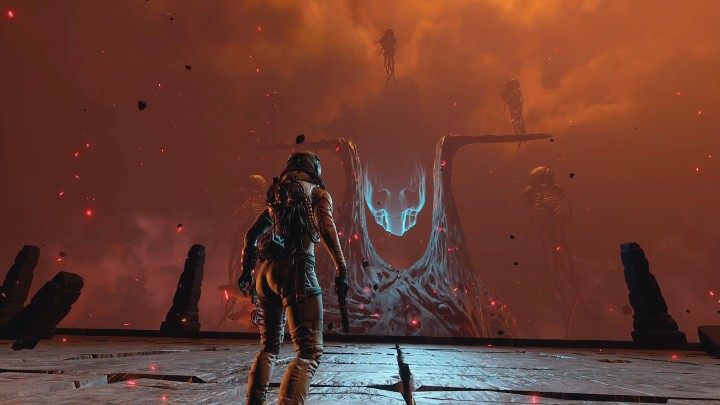 Before you fight Nemesis, take your time to prepare well and select the right weapon. Shotguns won't be very useful during this fight, because the boss will remain at a considerable distance from Selene throughout the battle. If possible, seek out a weapon with an Alt-fire that moves in a straight line - it's much harder to hit the boss's weak spots using bullets that follow a parabolic trajectory path. 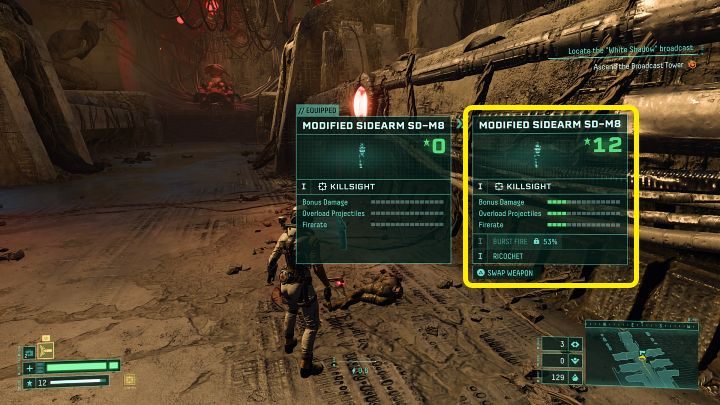 It's worth noting that before the boss fight, you will find a good quality Modified Sidearm that will be perfectly suited for this battle. If you don't like using regular pistols, a machine gun will be a good alternative option. 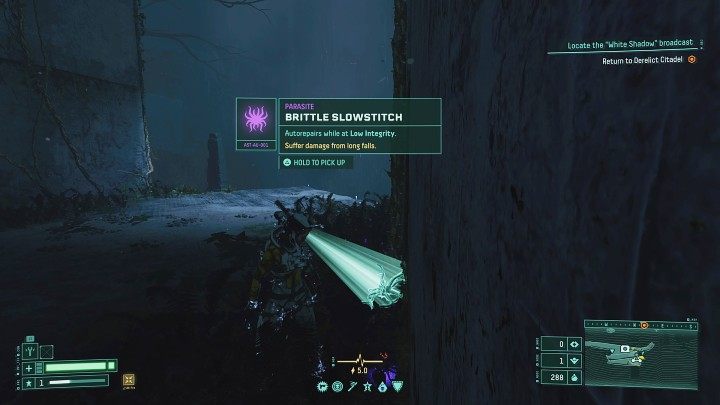 Consider having at least one large first aid kit on you (Large Silphium Vial) as well as a consumable item that can give Selene a protective shield to defend herself against the next attack. A parasite (such as the Ominous Slowstitch or Brittle Slowstitch) that automatically starts to slowly heal Selene when her health drops to a very low level will work perfectly in the Nemesis boss fight. Artifacts that can bring Selene back to life, namely the Astronaut Figurine, and the Child's Watch, are also extremely useful. 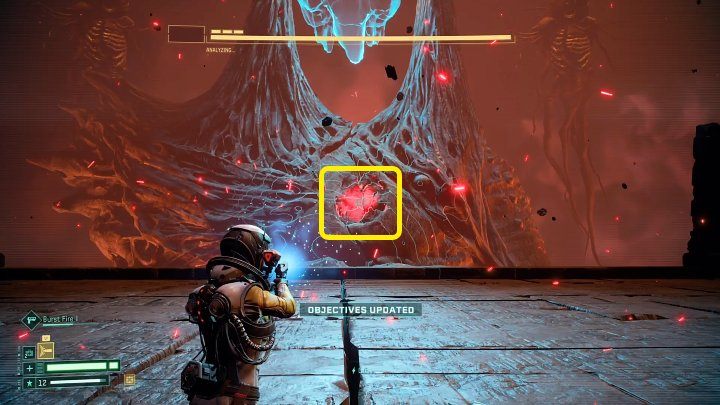 During the first phase of the fight against Nemesis, you must aim at the boss's weak point, which is marked in the above picture. This is the only way you can deal damage to the creature.

The two strange creatures floating next to Nemesis will also join the fight and carry out various attacks. 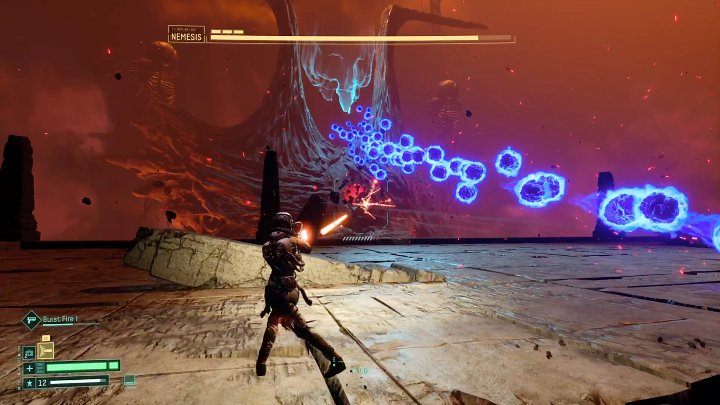 Nemesis will shoot a series of blue spheres, which the boss can steer slightly to the sides, so it's very important to stay in constant motion to avoid getting hit. These projectiles aren't especially fast, so they shouldn't pose much of a threat. 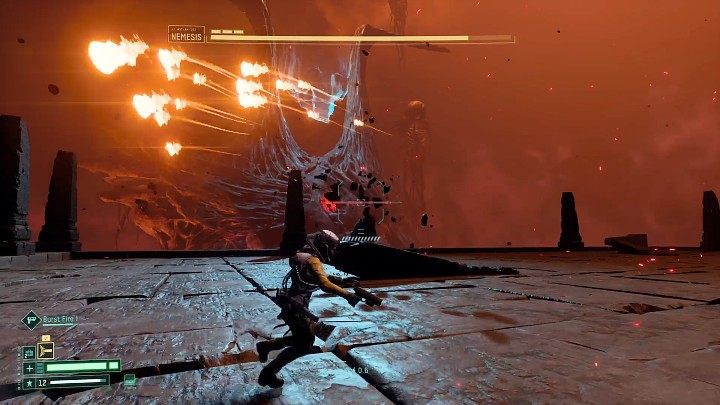 Nemesis can also convert energy into a series of small orange projectiles that move at high speed and can slightly change their flight direction near the end. When the boss uses this skill, you need to run to the side or dash just before taking the hit. 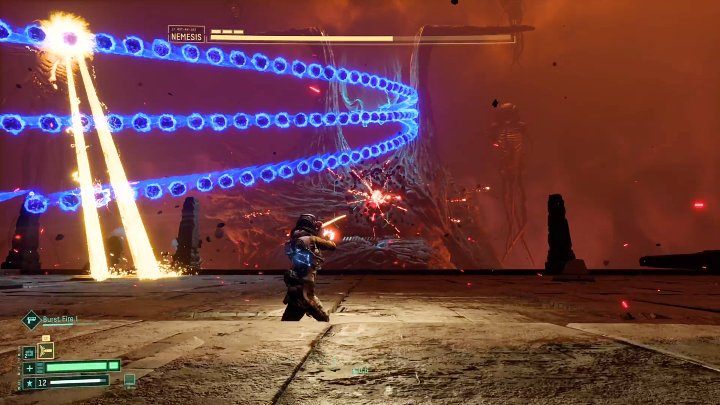 Nemesis's next skill is usually combined with a laser attack performed by one of the two levitating creatures. The boss will shoot a series of blue spheres in your direction that will move across the arena from left to right or vice versa. The gaps between the rows of projectiles are large enough to run between them.

The levitating creature will begin to concentrate energy on the arena floor, and then with a quick, fluid movement, perform an upward slash in a straight line - be prepared to dodge sideways or run further across the arena. 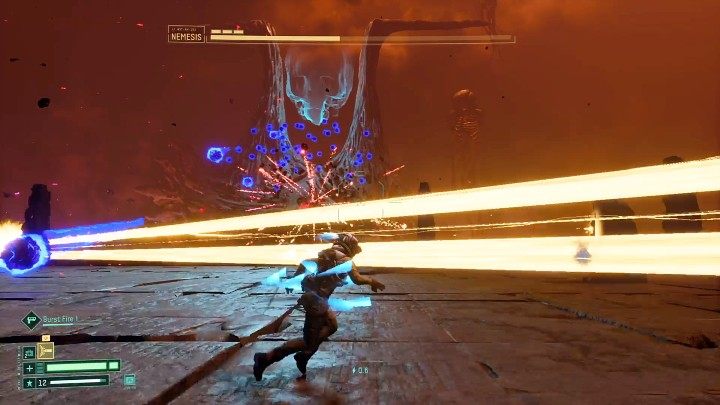 The creatures accompanying the boss can also launch horizontal laser beams, which they will move from one end of the arena to the other - be ready to dash just before you take damage. 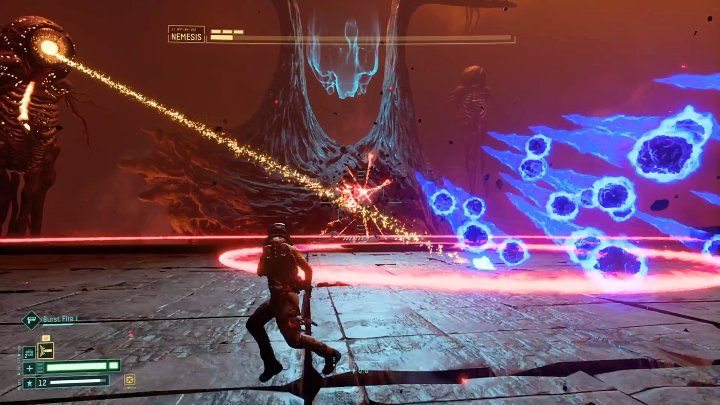 Nemesis's monster companions can also concentrate energy on the arena to trigger slow-moving waves of red energy. The intervals between each attack are long enough that you can easily make a jump or dash.

In the second phase of the fight, Nemesis gains access to several new abilities, some of their previous abilities are slightly modified, and even more often they will be aided by up to four levitating creatures that will join the encounter in pairs, further complicating the fight. 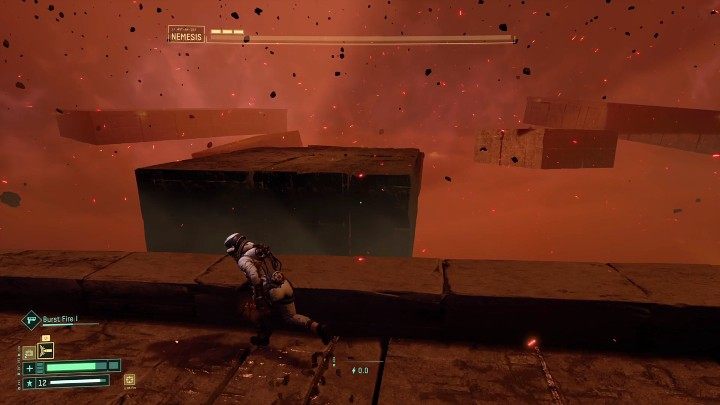 Before the second phase of the battle begins, the arena will become divided into several smaller platforms, and the boss will appear in front of one of them. If the fight against Nemesis drags on, the boss will start moving between these platforms. 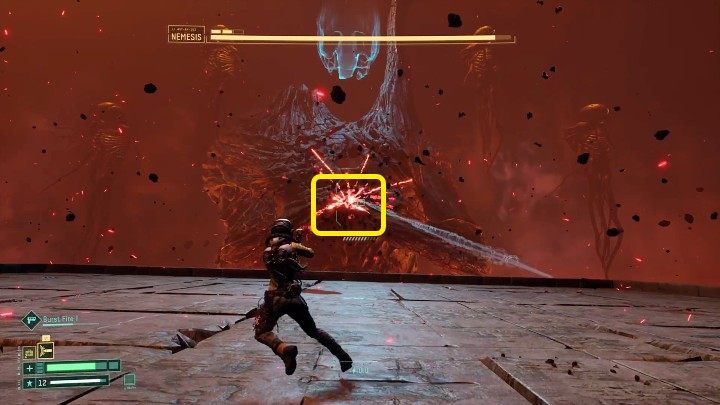 Just like during the first phase of the fight, you will need to aim at Nemesis's weak point to deal any damage to the boss. 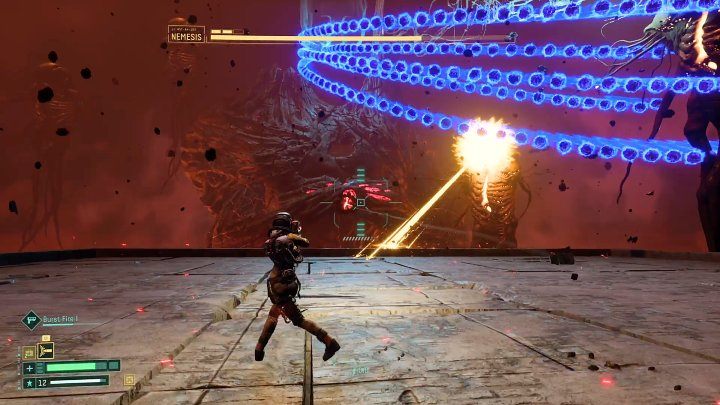 Nemesis's combined attack now covers a much larger section of the arena. The blue spheres move in three rows consisting of two lines. What's more, at the same time, the levitating creatures will launch two laser attacks - be on your guard and sense the right moment to dash. 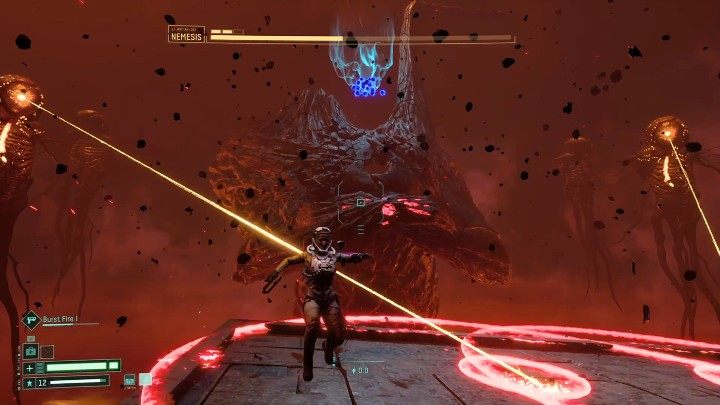 At some point, two creatures will fly into the arena and begin to concentrate energy on the ground, each causing three waves of red energy to spread out in all directions.

When this happens, it's best to stand in one of the corners of the arena and make three jumps within a short time frame to jump over all the waves of energy. 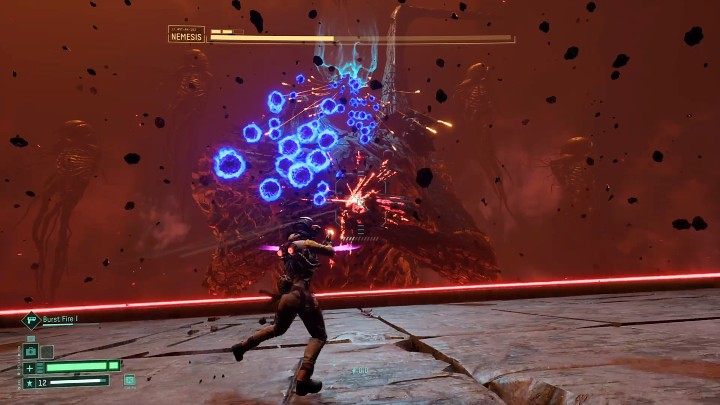 Nemesis can now combine two basic attacks into one - the blue orbs will now be much more numerous, but they still move slowly, so they're easily avoided by sprinting or dashing to the side. 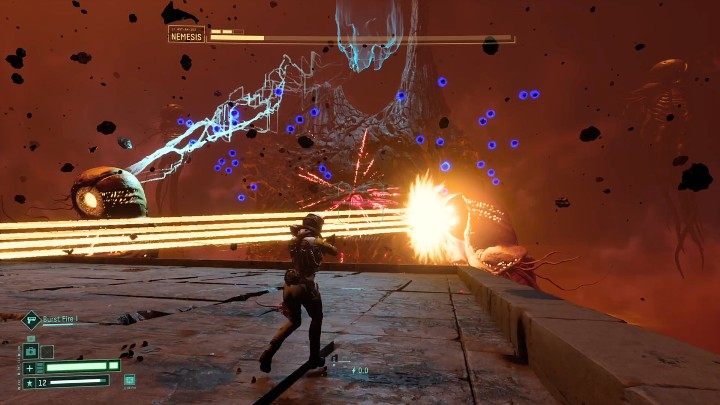 The horizontal laser beams fired by the strange creatures are now aimed slightly higher, and on top of that, the enemies will move them from side to side, so you will have to dodge them twice. 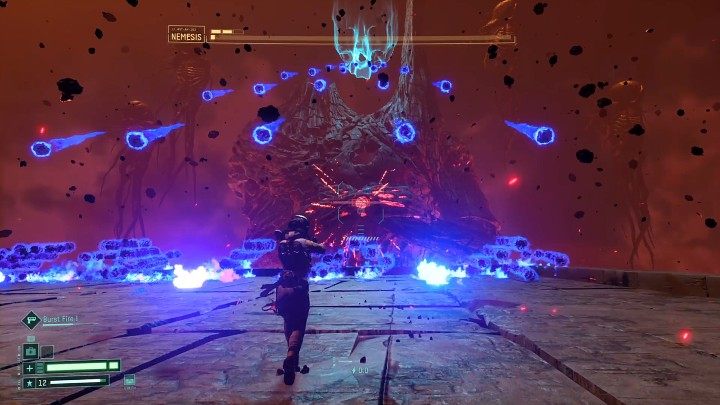 During the third phase of the battle, Nemesis uses their previous abilities, but also gains several new skills, and additionally, the boss is helped by up to six levitating creatures that will join the fight at random times. 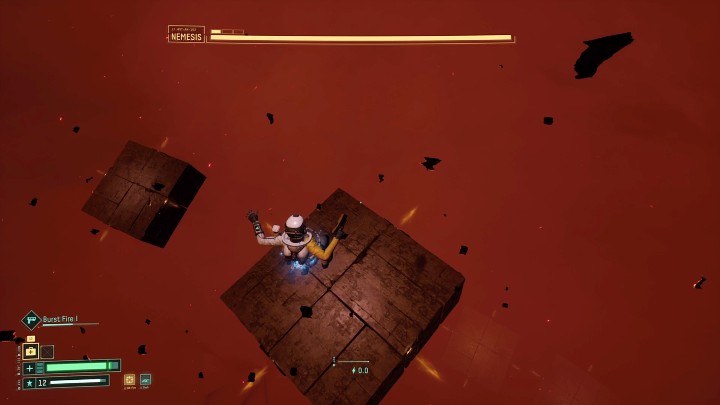 This phase of the fight begins with a fall from a great height. Your task is to land on one of the levitating platforms - you can control Selene during the fall or use the Icarian Grapnel to grab the edge of the platform.

Platforms are considered solid obstacles, which means that the skills of the boss and strange creatures can't pass through them - they can be used for protection. 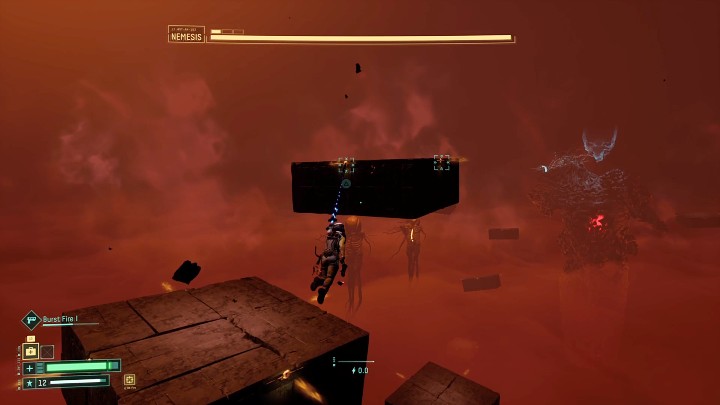 It should be noted here that the platforms constantly change their position and drop down after a certain time, so you cannot continuously stay in one place. Use the Icarian Grapnel to move between adjacent platforms and get close to the boss.

In the game Returnal, weapons have a certain effective range, so you can't shoot at the enemy from a very long distance, because you won't be dealing damage to them. 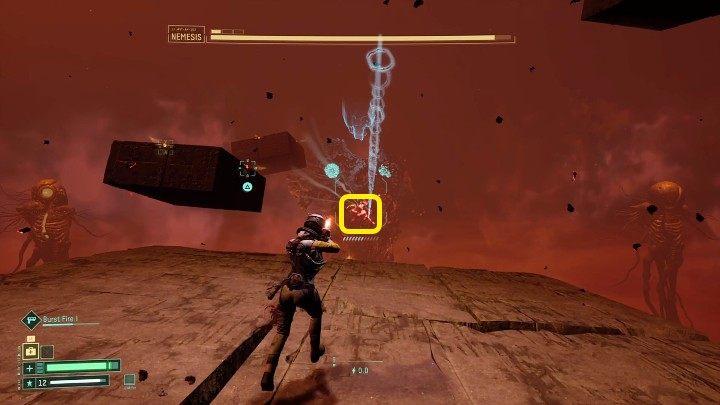 The boss's weak point is still in the same spot - you need to focus all your firepower on the bright red point. 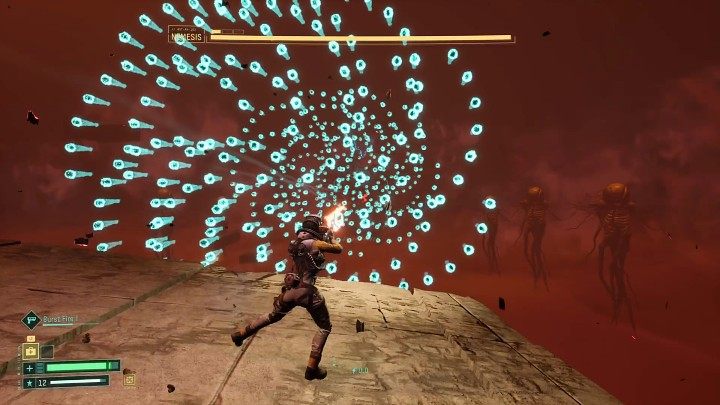 Nemesis can now release waves of energy spheres in the shape of a vortex - the waves move at medium speed and can be positioned one behind the other or right next to each other, thus covering a larger section of the available space. 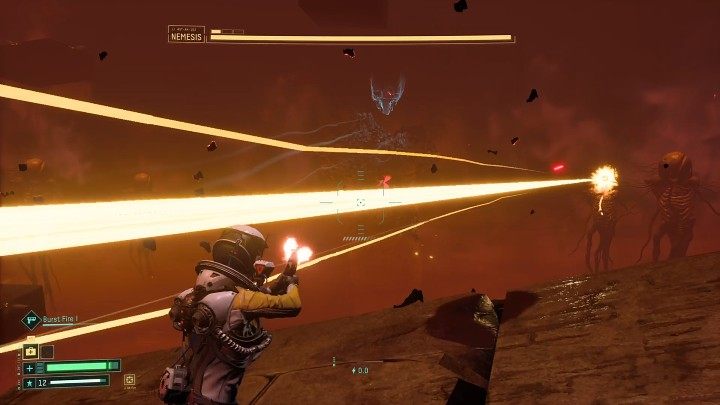 At random moments, the creatures levitating on either side of the boss will join the fight and send yellow or red laser beams towards Selene. You can avoid injury by dashing or moving to another platform. 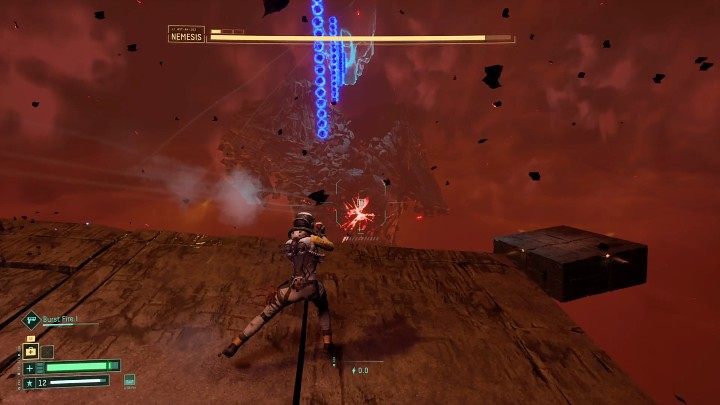 Nemesis can now fire vertical columns of blue energy orbs that they can also move to the sides. The spheres move at high speed and can be dodged by dashing or jumping to another platform. 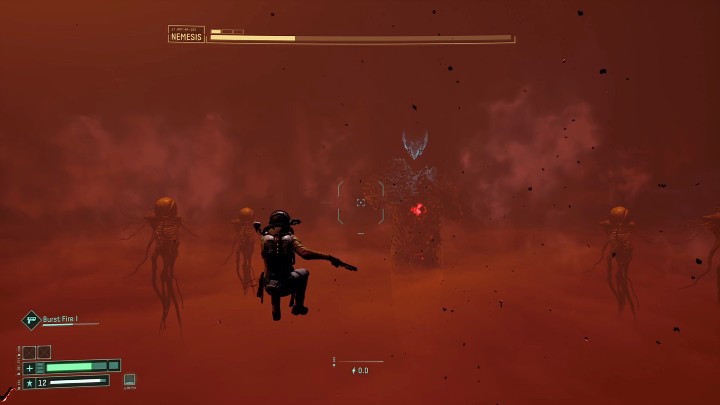 When the boss's health drops to about 1/3rd, Nemesis will push Selene away a considerable distance. Your task will be to re-approach the enemy, but you have to be very careful, because you will be under constant fire. 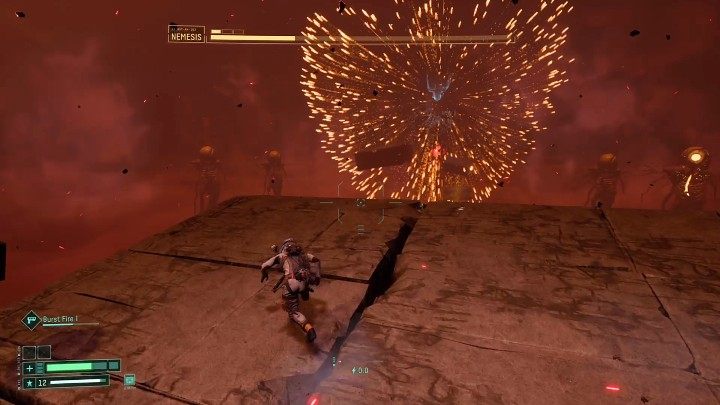 At this stage of the battle, Nemesis will start creating a cloud of small orange projectiles that fly at very high speed. The moment the projectiles reach Selene, some of them will break away and aim directly at the heroine - be prepared to dash away. 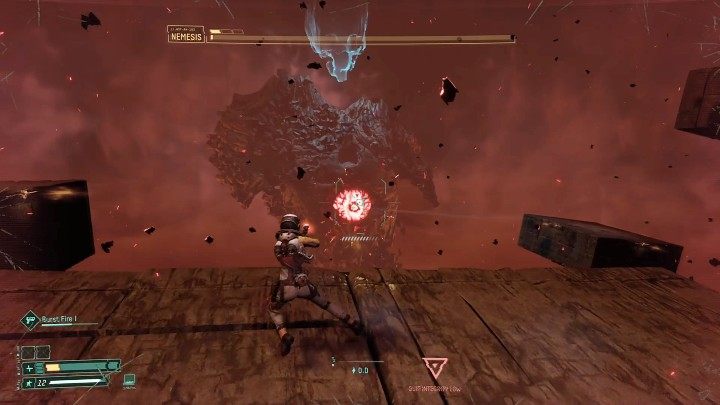 During the final phase of the battle against Nemesis, you will have fewer opportunities to fire accurate shots, but remember that you don't have to rush - focus on dodging enemy attacks and return fire at times when you're safe and eventually you'll manage to defeat Returnal's third boss.