This page of the Returnal guide contains a walkthrough of the Ixion boss fight. You will learn when the fight with Ixion happens, what attacks you may expect of him and how to avoid them as well as how to defeat him effectively and quickly.

The fight with Ixion occurs at the end of the exploration of the 2. biome of Atropos. Ixion is the second boss that you will face in Returnal. It has three health bars, so the duel with this opponent was divided into three phases, and in each of them, the boss uses unique combinations of attacks.

The arena where you will fight with Ixion floats in the air and you can fall over its edge. 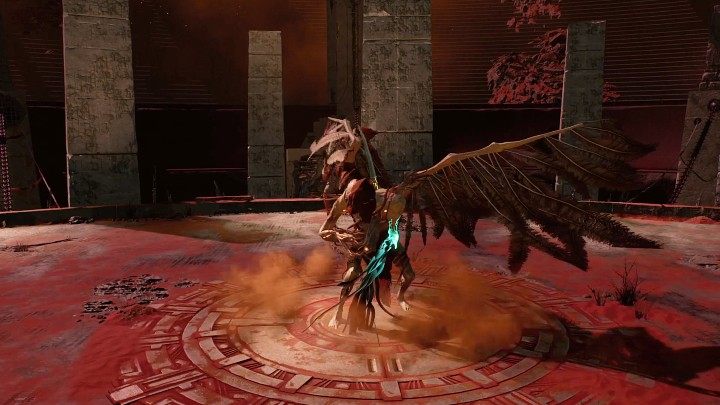 Before starting the fight, take your time to prepare well and choose the right weapon. If you prefer to fight at close range, you can opt for Spitmaw Blaster rifle, but automatic weapons will work as well in this fight. 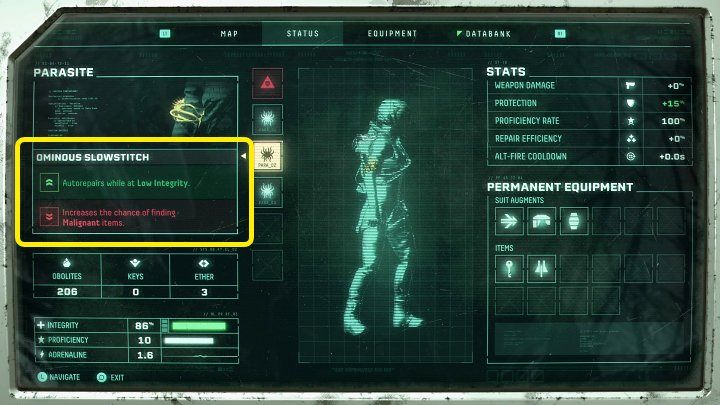 Consider having at least one large first aid kit on you (Large Silphium Vial) as well as a consumable that can give Selene a protective shield to defend herself against the next attack. The parasite Ominous Slowstitch will work perfectly in the Ixion boss fight because it will automatically heal Selene when her health drops to a very low level. 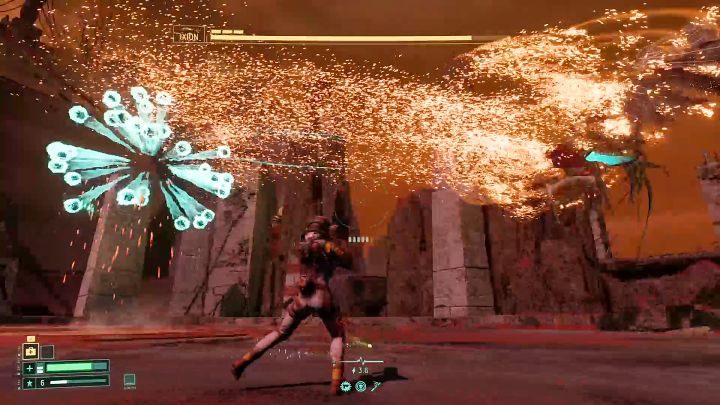 Ixion is a mobile enemy and will often move around the arena, taking advantage of fast dashes. Every time the boss changes position, he will release energy orbs from the spot where he starts dashing and they will slowly spread in all directions. 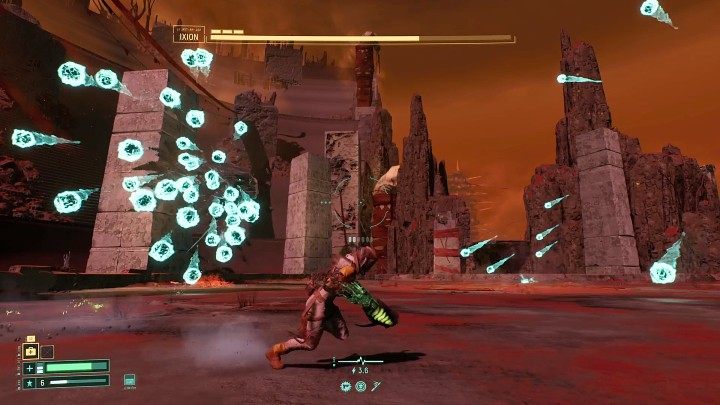 Ixion can fire a cloud of energy orbs towards Selene, which will fly close to each other at first, but then the distance between individual orbs will slowly begin to increase. Run sideways or perform a dash to avoid taking damage. 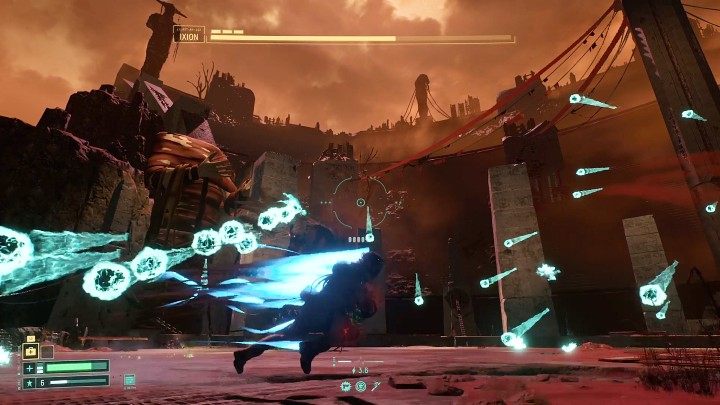 It is slightly more difficult to dodge the attack in which Ixion fires from his hand a series of fast-flying bullets that track Selene's movement. In this case, it is best to run in one direction and not stop until the enemy breaks the attack. 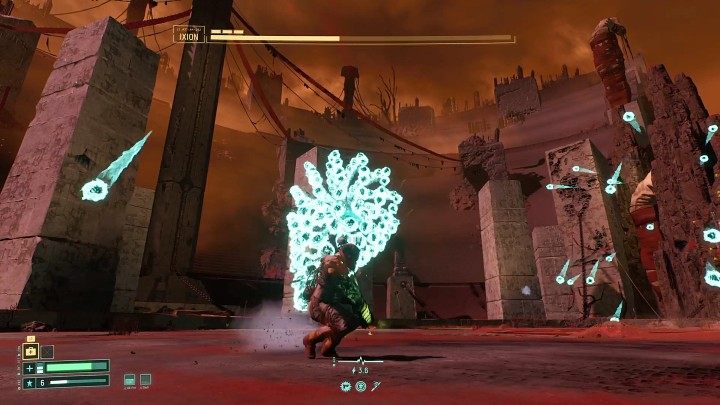 Ixion can also fire a cone of energy orbs that stay close to each other at first and then begin to separate. This skill covers about 1/3 of the arena and can be easily dodged by sprinting or dashing sideways.

During the second phase, Ixion gets access to several new abilities, some of the previous boss abilities are slightly modified and he uses different attack combinations more often, which further complicates the fight. 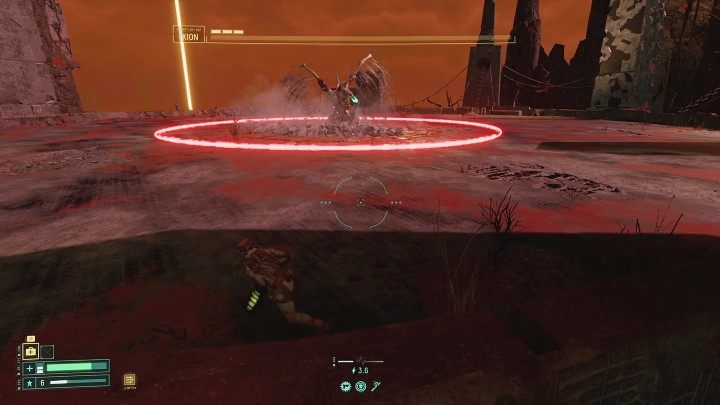 Before the second phase starts, Ixion will land in the middle of the arena and create a shock wave of red energy that will spread from the center to the end of the arena - just jump up at the right time to dodge it. 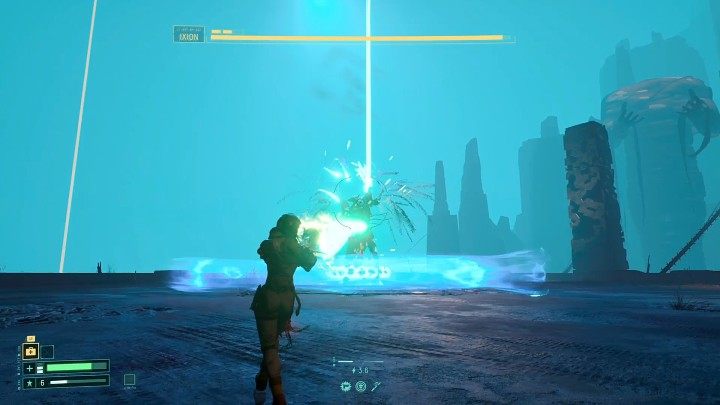 When the fight begins, Ixion will stand in the middle of the arena and he'll start firing energy out of his body in several ways: 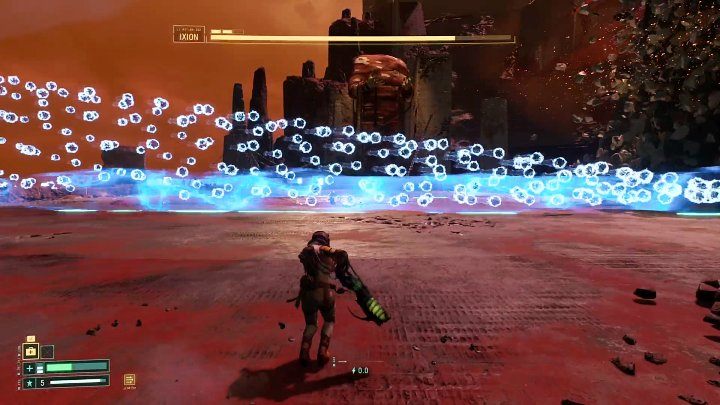 If you lose sight of Ixion, it is a sign that he will soon begin to quickly fly over the arena - each such flight produces a band of energy orbs in the middle of the battlefield,as well as two blue waves which will diverge to the sides.

At this point, it is recommended to stick to the edge of the arena and jump over the wave or perform a dash just before taking damage. 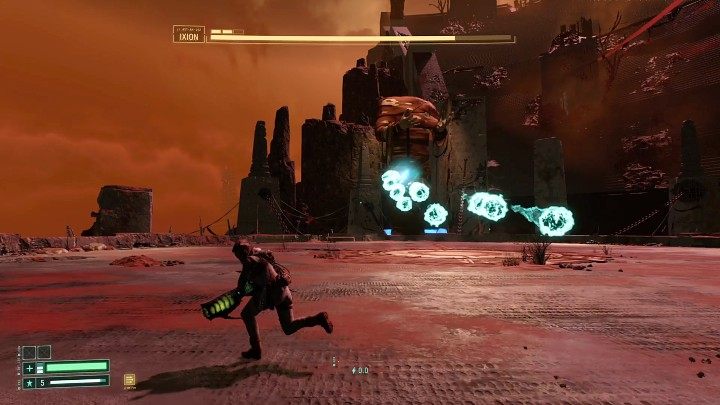 In the second phase, Ixion fires a much longer series of energy orbs that track our heroine's movement. In this case, it is best to run in one direction and not stop until the enemy breaks the attack. 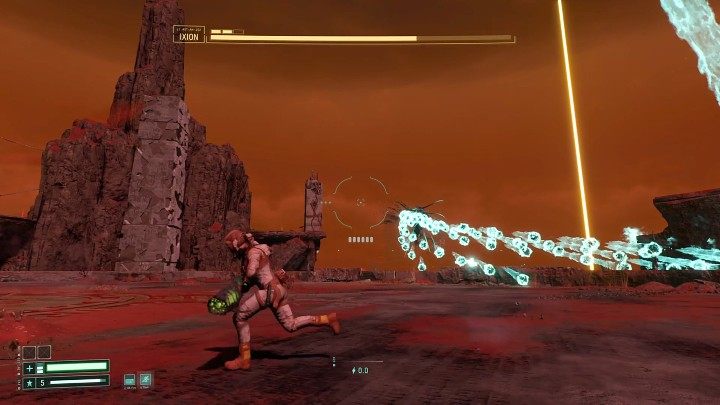 The boss also has a different version of this ability - instead of one band of orbs, he can shoot up to three vertical bands that fly at high speed and track Selene's movement. As with the earlier version, it is best to run in one direction and wait out the shelling. 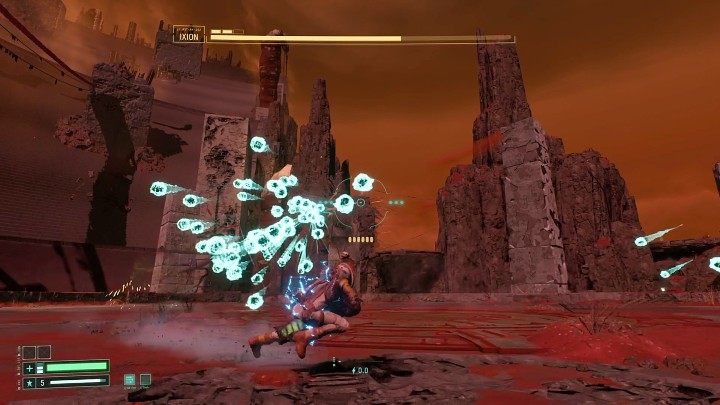 At this point, Ixion can fire up to two clouds of energy balls instead of one, but this is the least dangerous skill of this enemy. Run sideways or perform a dash to avoid taking damage. 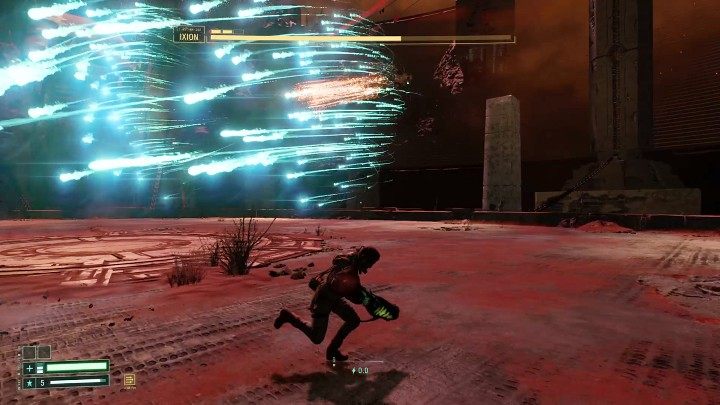 When the enemy begins to float in the air and charge his power, it is a sign that he's about to fire a whole bunch of small glowing missiles at you. They don't track targets, but can slightly change their direction near the end and ultimately hit Selene.

This attack can be avoided in two ways: keep running in one direction or perform a dash at the right moment. 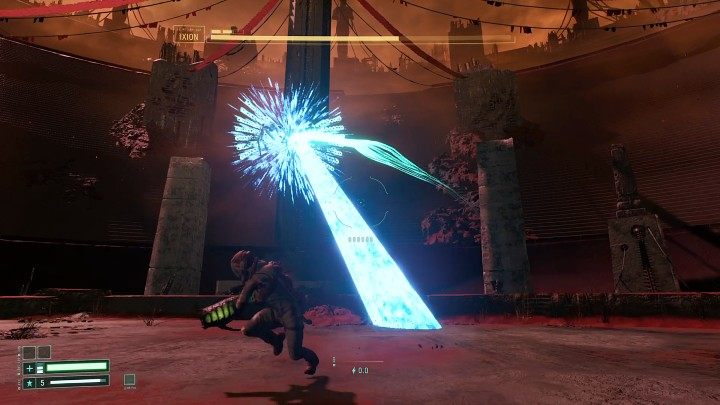 Laser beam attack is another special attack that Ixion can perform while in the air. First, the boss concentrates his energy to make a quick, linear cut up - be prepared to dodge sideways.

In the third phase, Ixion will lose his wings and will not hover over the arena, but will begin to use completely different abilities. At this stage, the boss will not give you a break and will fill the arena with a very large number of missiles combined into deadly configurations and will perform a lot of melee attacks, so you have to be careful and watch Selen's health at all times. 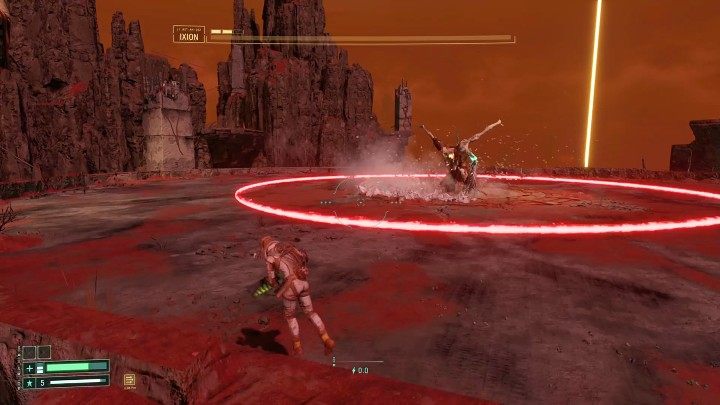 Before the third phase starts, Ixion will land in the middle of the arena and create a shock wave of red energy that will spread from the center to the end of the arena - just jump up at the right moment. 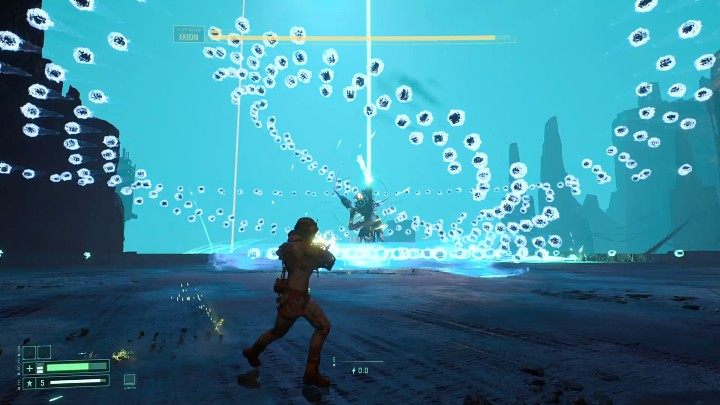 The last phase of the duel will begin in the same way as the second phase, but the sequences of orbs fired by Ixion will be much more complicated and you need to be very careful not to take damage.

At the end of this stage, Ixion will stand in the middle of the arena for about 9 seconds and will be pulling a blade out of his chest, with which he will then begin to perform frenzied attacks. Use this time to send as many missiles towards the boss as possible. 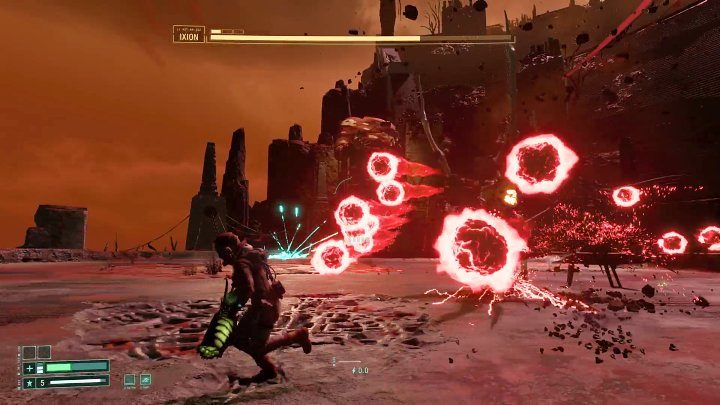 If Ixion begins to prepare for a jump, it is a sign that he's about to throw himself at Selene, and he will cause an additional explosion of red energy orbs in his landing spot - be prepared to perform a dash sideways and sprint to avoid being hit by the orbs. 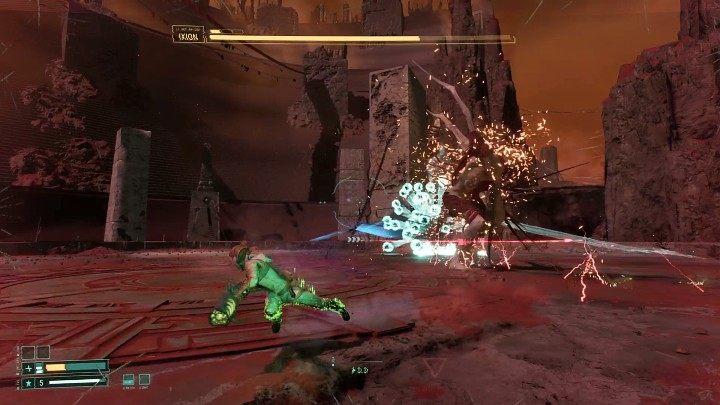 When Ixion swings his weapon, he can create a shock wave just above the ground or at the height of Selene's head - be prepared to perform a jump or a dash to avoid getting hurt. 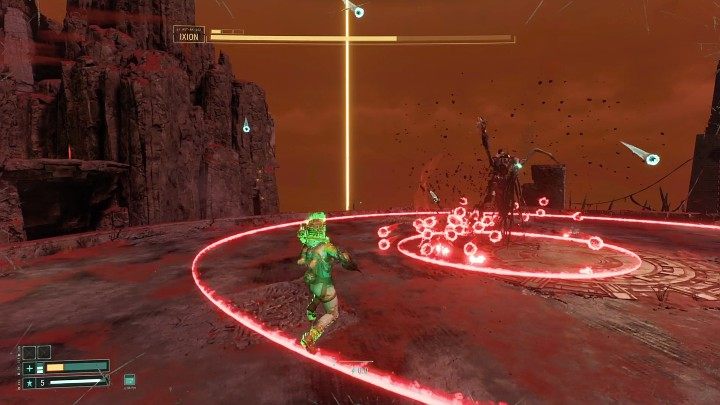 Ixion can also stop and start hitting the ground with his weapon. Each blow to the ground creates a shock wave right at the ground, accompanied by an explosion of red energy orbs. In this situation, it is best to stay in the remote part of the arena and just jump over the red beam. 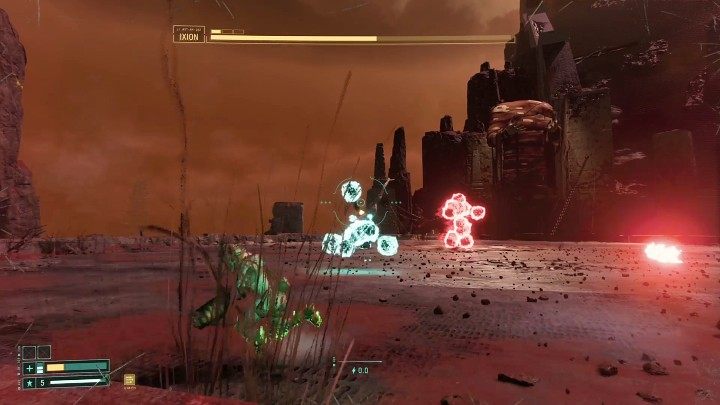 The boss can also fire several series of bright and red orbs, one after the other. The balls will fly in a cluster and can be easily dodged by sprinting or performing several dashes. As soon as this attack is over, Ixion will release a few energy orbs in each direction, but the gap between them will be large enough to easily dodge them. 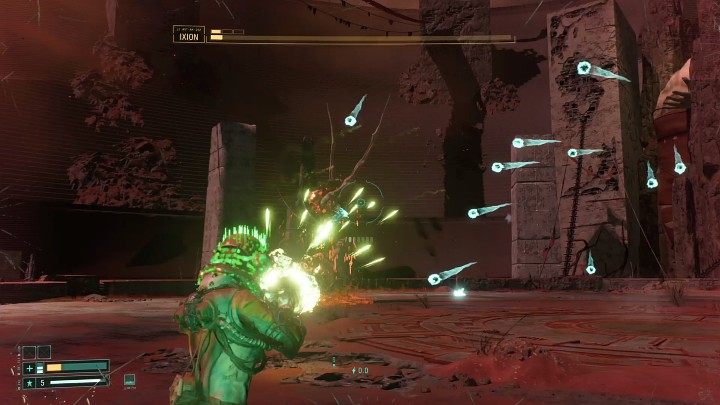 During the last phase of the fight, you will have much less opportunities to fire accurate shots, but remember that you don't have to rush it - focus on dodging enemy attacks, shoot when you are safe and you'll finally defeat the second boss of Returnal.