This page of the Returnal guide explains how to reach inaccessible shelves and how to grab onto interactive edges. This can be very helpful for site exploration. We also suggest what you can gain from reaching high and remote platforms and if there are alternative methods of climbing and reaching seemingly inaccessible shelves. 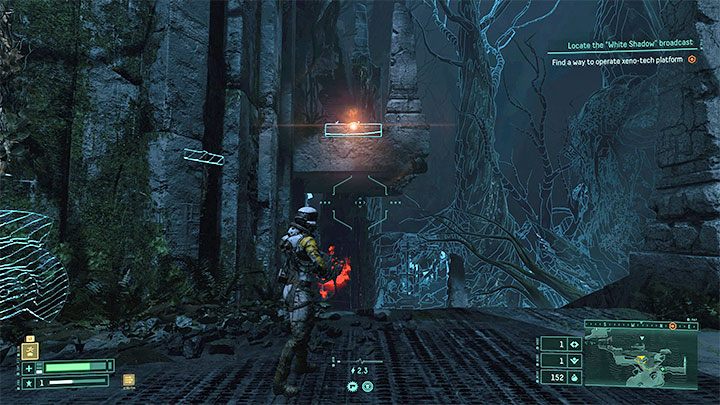 Since the first hours spent in the game, we can notice the illuminated interactive edges, which are located on high or distant shelves. They are additionally marked by the game when the area scan mode is enabled.

These places are anchor points. Unfortunately, Selene won't be able to use them at the beginning because she does not have the right gadget for that (we'll come back to it further in the text). This means that we will not be able to explore 100% of Overgrown Ruins and Crimson Wastes on our first visits there. 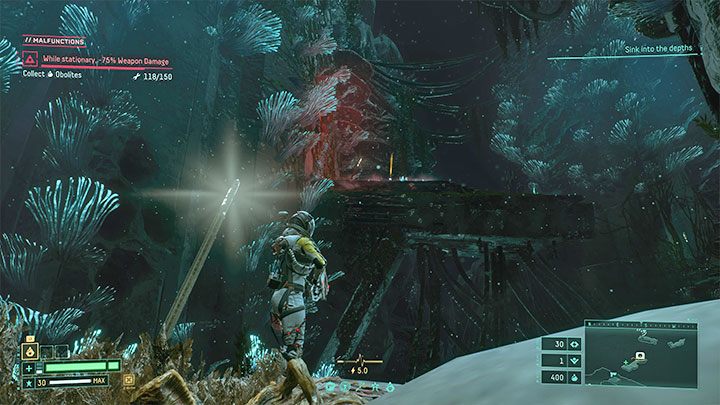 In other biomes, you'll come upon high or clearly distant shelves, near which there are no interactive edges. Reaching them involves using another gadget, which is described in the last paragraph on this page. 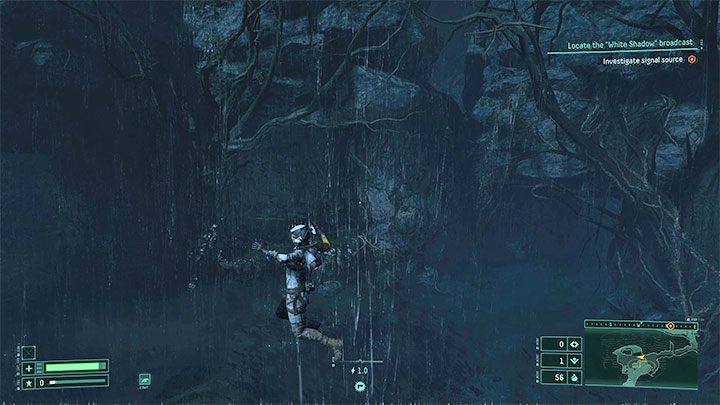 Even if you don't have the device, you can still try to grap the interactive edges in two ways:

1) Jump from adjacent, easily accessible shelves- we can look for a shelf located next to the one with the anchor point. If the two shelves are not extremely far from each other, then we can make a jump towards the second shelf and activate a long dash / dodge while in the air (by holding Circle). 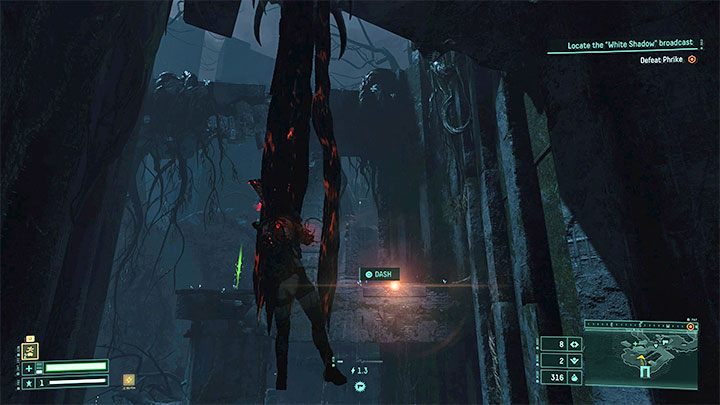 2) deliberately let the tentacles of aliens catch Selene - hanging tentacles can be found starting from Overgrown Ruins. By default, they are an obstacle and a threat, because they stop Selene. However, we can deliberately let them catch Selene and use them as a kind of elevator. After we are pulled close enough to the shelf, we can hold Circle to break loose and dash towards the shelf. 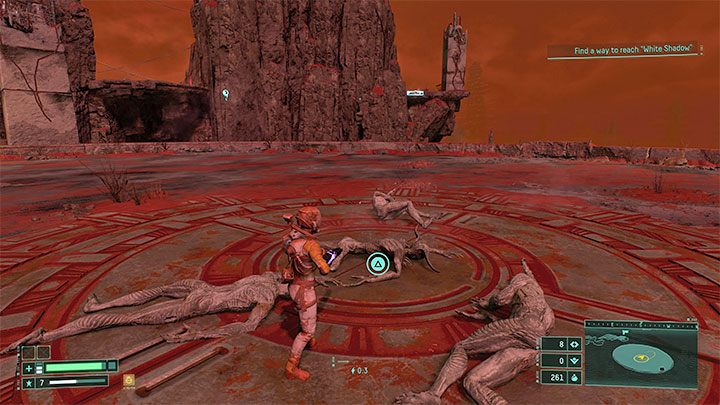 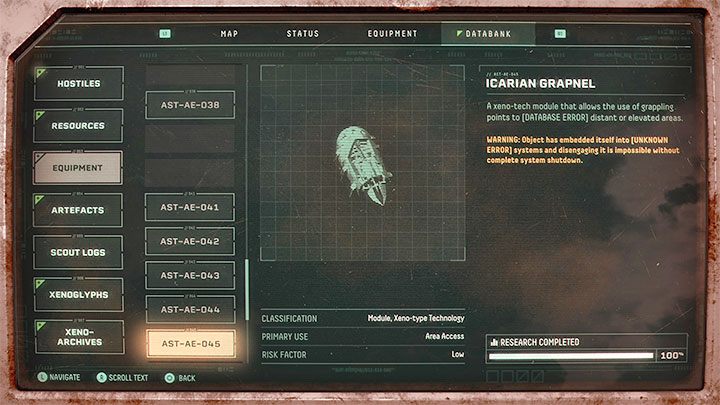 The problem of grabbing distant edges will be solved after we defeat Ixion - the second main boss of the game residing in the Crimson Wastes biome.

Shortly after dealing with the boss, Selene comes across bodies of aliens and finds a device there - Icarian Grapnel. 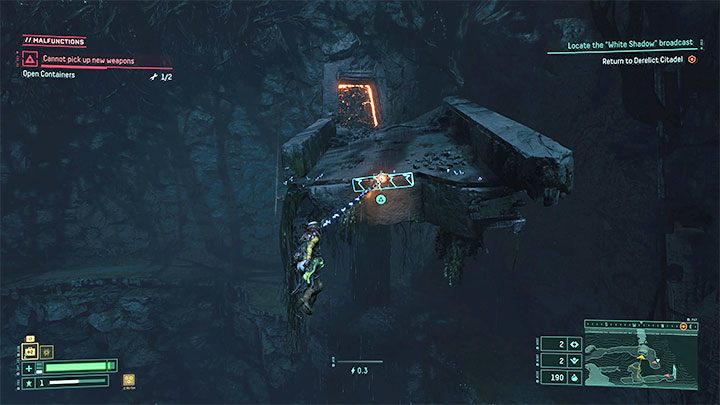 Icarian Grapnel works similarly to grappling hooks from other games. This object has two main uses: 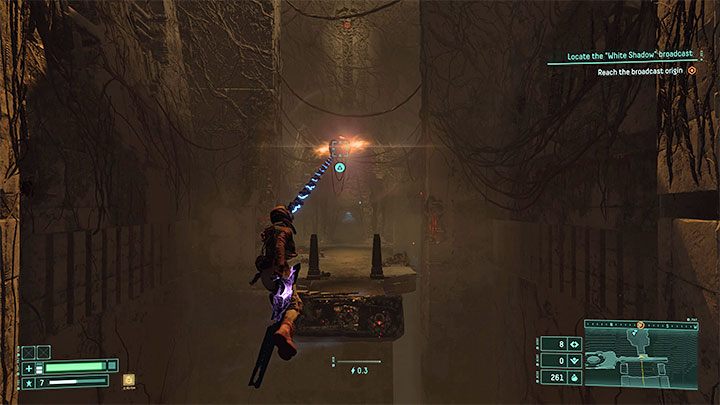 2) we can pull ourselves to the levitating orbs with anchor points - Selene will bounce off and start a long dash. While in the air, we can again look for opportunities to catch other anchor points or allow the heroine to land on a distant shelf. 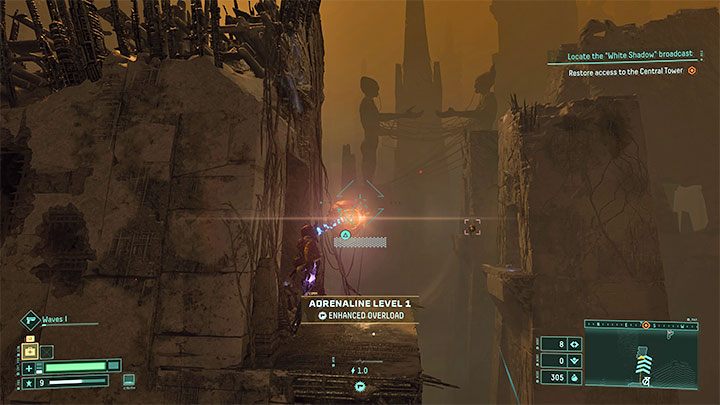 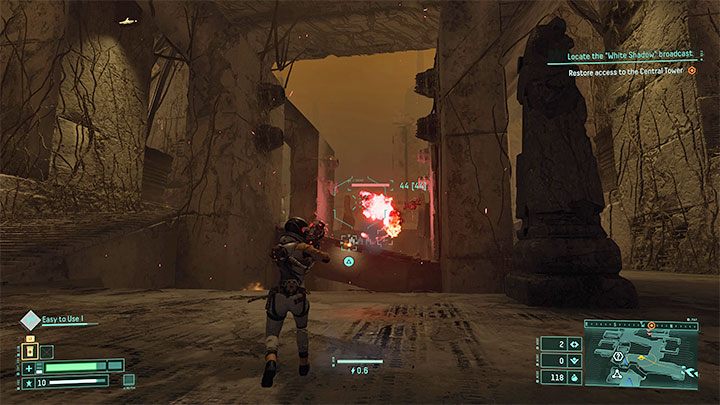 Delphic visor (glasses) - how to unlock? 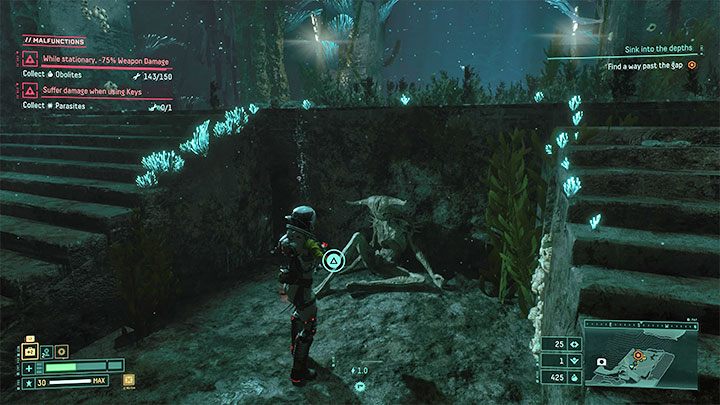 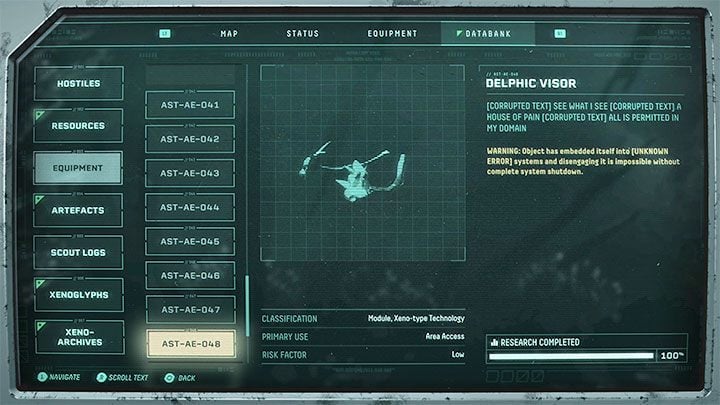 The problem of reaching distant shelves without visible interactive edges can be solved only after reaching the 6. biome - Abyssal Scar. In the process of exploring this biome, Selene must deal with a mutated mini-boss.

Soon after winning a duel with the mini-boss, our protagonist comes across the body shown in picture 1. Examining it will lead to the unlocking of the Delphic visor, which is a kind of an eye implant. It is worth noting that the visor is a permanent piece of equipment, so it will remain with Selene forever and will be available from the very beginning in all subsequent cycles. 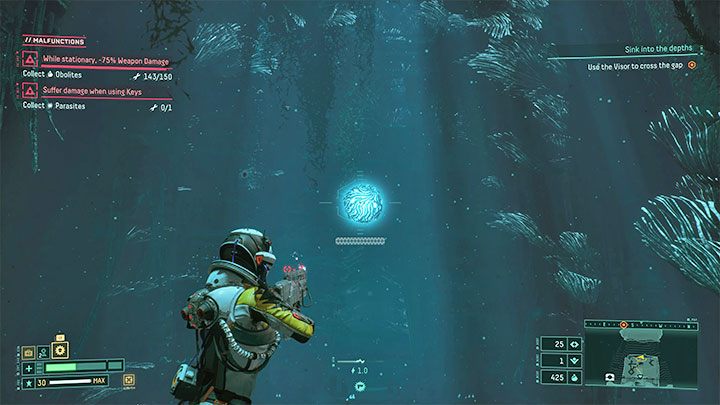 Testing the Delphic viewfinder is part of the mandatory exploration of the 6. biome - it will be needed to advance to the next part.

Once you've acquired the visor, Selene can come across levitating orbs - see the picture. Don't use the grapnel on them - just shoot at them. 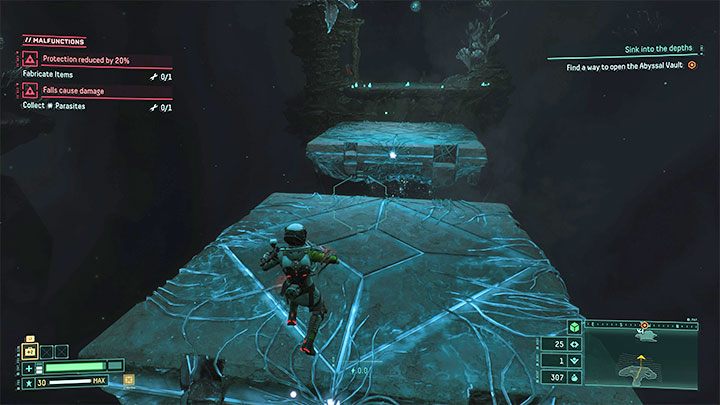 When you hit an orb, new shelves will appear in the area. They will allow the main character to get to places that were previously unavailable. These can be either higher shelves with treasures, or simply remote location exits, which, by default, are separated by a large gap.

In the next cycles, you should of course look for opportunities to hit other orbs and thus gain previously unavailable finds, such as scout logs, ciphers or xenoglyphs.