On this page of the game guide you will find a list of beginner's tips for Returnal. We have prepared various hints and tips concerning combat, exploring the game world, avoiding additional threats, reducing the number of the main character's deaths and more.

Death is a natural part of Returnal - if you lose, don't stress about it 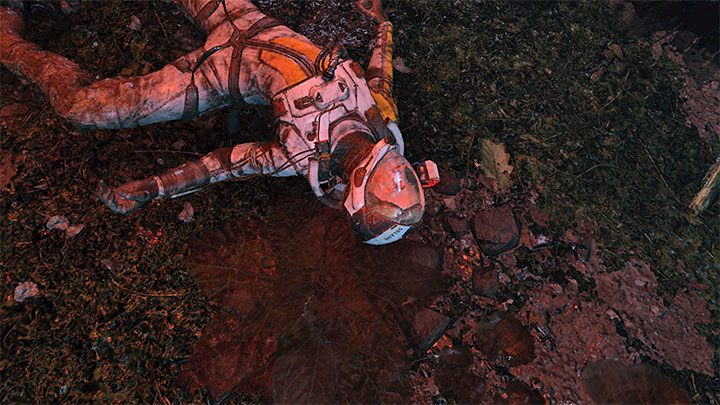 Returnal is a game with highly accentuated rougelike elements This means that death in the game is inevitable and it isn't possible to complete it without dying once. Once Selene dies, we will return to the vicinity of her wrecked ship and begin the struggle anew.

Subsequent deaths shouldn't become frustrating for us, because nearly every cycle we play can bring us something useful. Sometimes it's something simple, like learning about a new type of threat, getting used to the main gameplay mechanics, or learning the appropriate tactics for particular enemy encounters. Often enough, these also take the form of physical rewards that Selene gets to keep permanently and which are carried over to subsequent playthroughs. These may include melee weapons or a gadget that allows us to teleport between translocators. Each subsequent playthrough of the same section of the game should give us less trouble than the previous attempts.

Learn how to properly use the dodge mechanic - dashes 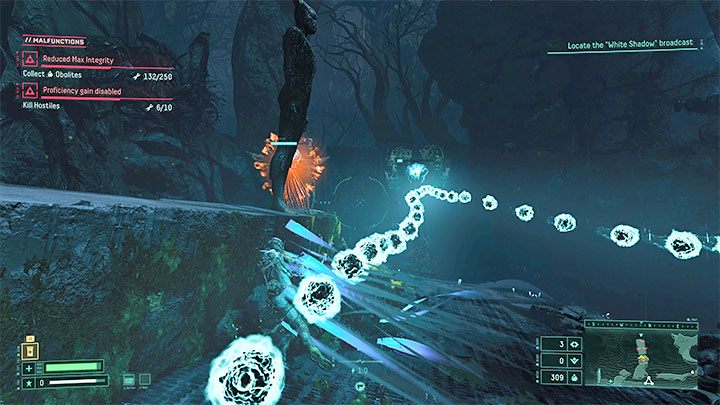 Dodges (also called dashes) are crucial in keeping the main character alive, especially since energy doesn't automatically regenerate in Returnal and, as a result, any depletion of our health bar is much more noticeable.

The following things are worth remembering:

Additional note - the use of dodges / dashes is not completely unlimited. After each dash, we have to wait a short while before we will be able to do it again. The cooldown period can be shortened or prolonged as a result of damage to Selene's armor or parasites attached to her body.

Icons of places worth exploring appear on the mini-map 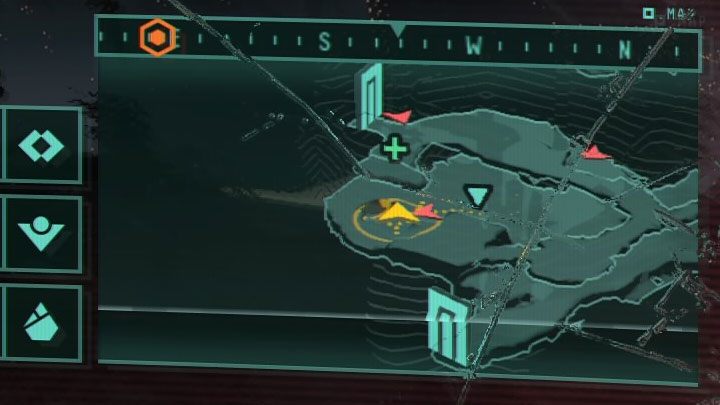 By default, the mini-map is always visible in the corner of the screen (if we haven't limited the visibility of the user interface in the game options) and can help us in various situations. Here are some of the most important cases:

Additional note - We can also view a full screen map of the area (by pressing the touch pad). However, not all icons appear on the main map - it doesn't display individual treasures or the location of opponents. The large map is best used to help navigate the entire region.

We can't investigate every area right away 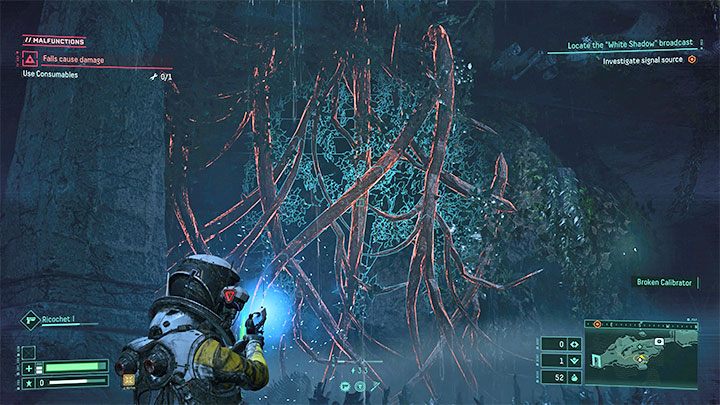 Returnal has some elements of the Metroidvania genre, as some areas and treasures won't be initially accessible. This isn't solely due to the lack of skill or insufficient map exploration. Access to certain areas requires possessing certain items or skills.

In the example from the attached image, Selene is unable to destroy the red vines and this problem can only be solved after acquiring a melee weapon (the Atropian Blade). Don't put too much emphasis on exploring 100% of the map. Let's arm ourselves with patience, because once we progress far enough in the game, we will unlock techniques that will allow us to reach new locations.

Take care of Selene's health, as it's difficult to cure her 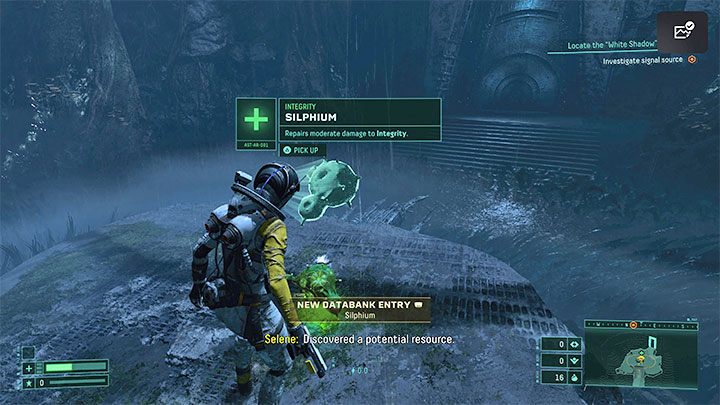 In the game Returnal, the integrity bar (the energy of the spacesuit worn by the main character) doesn't regenerate automatically. We need to be aware that once we're wounded, it will not be restored to its previous state over time. There is no option to automatically regenerate health for free in the game, even if the protagonist is on the verge of death. Let's try to avoid making easy mistakes (eg. falling into chasms, colliding with energy spheres launched by enemies) and undertaking actions which are too risky (eg. engaging in intense fights in open areas).

If Selene has lost some health points, search the mini-map for the green cross icons that lead to silphium deposits, a special resource used to repair armor (or increase the length of the energy bar). We can also heal on demand by using certain consumable items, although we won't always be able to find or create them when they're needed. 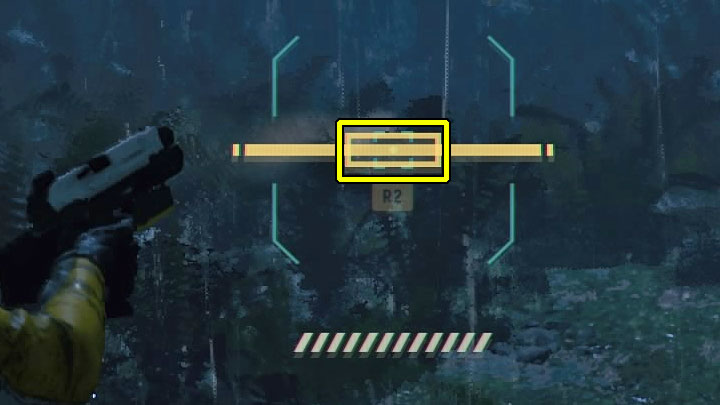 The weapons in Returnal theoretically don't consume ammo, but they can overheat, which necessitates an action that is very similar to reloading. The game calls it Overload and it's required in order to continue using an overheated weapon.

There is a mechanic in the game that allows you to reload / overload weapons faster. It involves pressing the R2 button just as the reload bar enters a larger rectangle - we've marked an example of this rectangle in the above picture. It's a good idea to practice this technique so you can resume using your weapon as soon as possible and to avoid failed reloads that will further increase the time before you can shoot again.

Additional advice - we can also try to avoid overheating weapons and shoot them in moderation, i.e. never expend every last charge. This is a good method if we aren't being pressured to continuously attack. 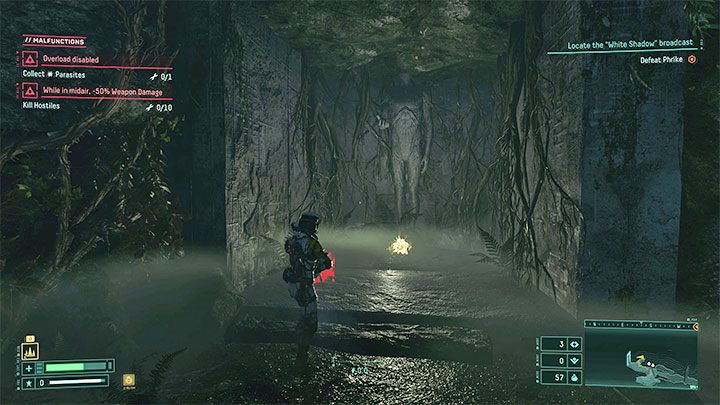 In the game Returnal, we shouldn't just visit the main locations associated with our current quest goals, but we should also explore optional locations. These can be divided into two main groups:

Regardless of how we reach these additional locations, we should search around for loot and unique devices to take or interact with. It will increase our chances of getting better equipment and collecting more resources. If a given location is too difficult for us, we can make an attempt to run away before the situation gets too complicated.

We can scan the area and find passages more easily 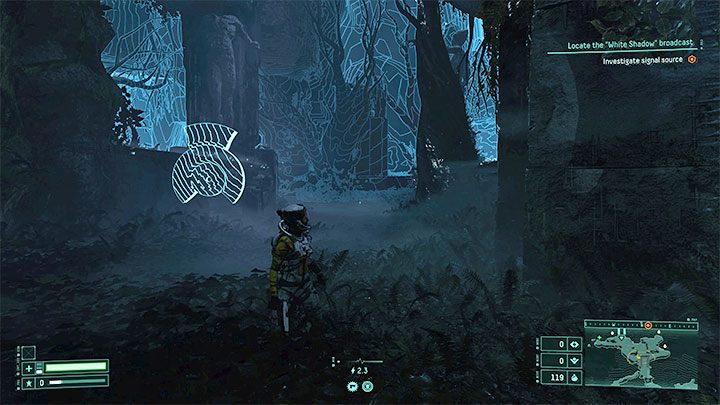 While playing the game, we can use the area scanning function without any restrictions - by default it is activated by pressing the right analog stick (R3).

The area scan primarily helps in finding accessible passages without having to view the area map on the full screen. It also marks elements such as the edges of interactive platforms. Unfortunately, the option to scan the area does not take into account smaller collectibles, which we will have to find in a more traditional way.

Avoid falling into traps and chasms. 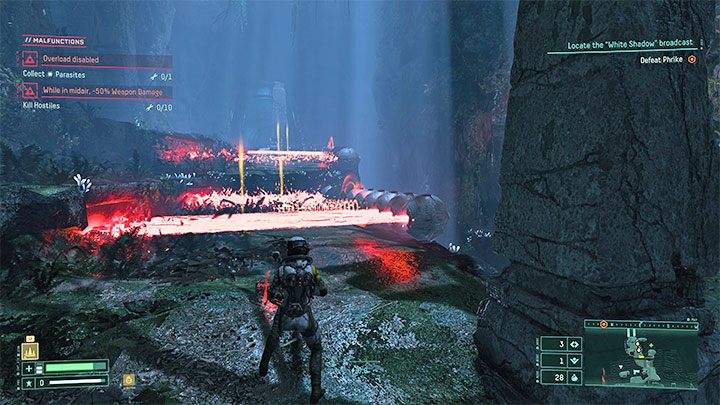 There are different trap variants that appear in Returnal and they are all dangerous. These can be, for example, various kinds of moving lasers, areas that are constantly bombarded or locations illuminated by large eyes scanning the surrounding area. Jumping and dashing are the main ways to avoid traps, and it is often important to learn how the trap functions, as it can always be repeated.

Falling into chasms is another significant threat. In particular, we must be careful in places where Selene fights on narrow platforms surrounded by chasms - it's easy to forget about this and make a mistake. Falling into chasms doesn't always result in death and the end of the cycle, but the character will needlessly lose some energy. If we have enough time to save ourselves from the fall, then let's try to use a long-range dash in an attempt to land somewhere safe.

Collect as much loot as possible 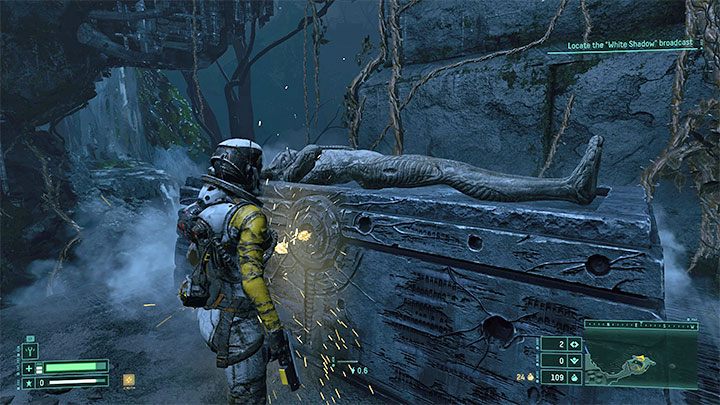 Collecting loot and swapping our current items for better ones can make it easier for us to keep the main character of Returnal alive. While progressing through the game, let's try to prioritise investigating various containers. We can count on finding the most valuable treasures inside locked containers that require a key.

We will have to make choices between certain equipable items. For example, Selene may only use one type of firearm and a limited number of consumable items at any given time. Choose equipment which boasts the highest statistics or other features that will be most useful at the current stage of the game. For example, if we are preparing for a boss fight, we should have a consumable item in our inventory that allows us to heal the protagonist or inflict bonus damage to the boss.

Seek out opportunities to destroy the elements of the environment 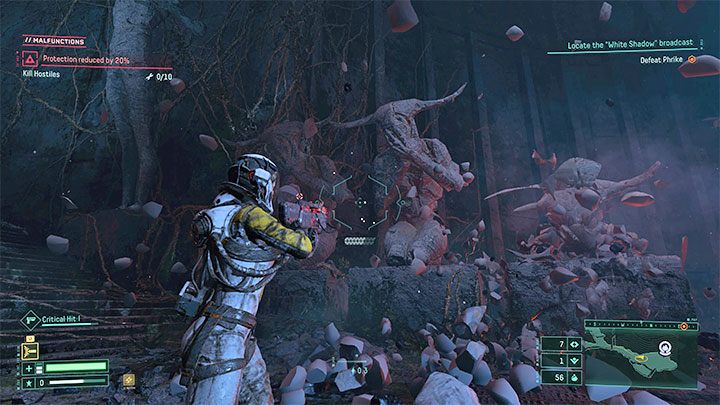 This is an aspect of the game that is relatively easy to ignore - many of the large objects from the immediate surroundings can be destroyed with firearms or melee weapons. Disposing of these types of objects may help us find secret locations and obtain some loot. In particular, seek out statues with yellow eyes, as they usually conceal the rare resource known as obolite. 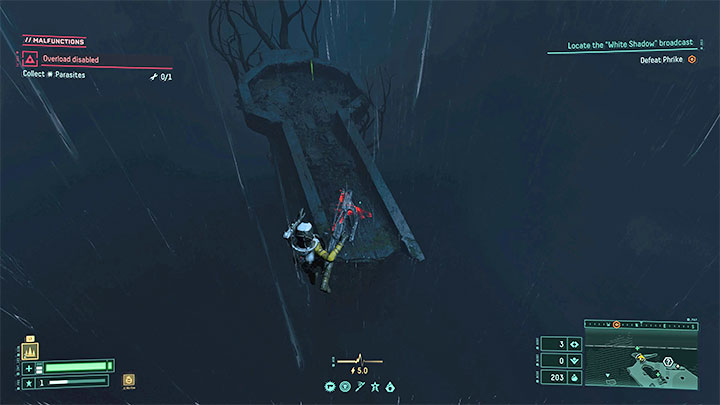 This knowledge can be useful while exploring and fighting in locations that have a more vertical structure. Usually, we don't have to worry about losing energy after jumping from a higher altitude, assuming that the main character lands on stable ground and doesn't fall into a chasm, of course.

Unfortunately, there are exceptions to this rule - certain types of damage (Malfunctions) of the suit as well as the attached parasites can impose debuffs on the main character that result in taking fall damage. Try to prevent these situations from happening until you dispose of said debuff from your system.

Avoid performing dangerous activities when your character is low on health 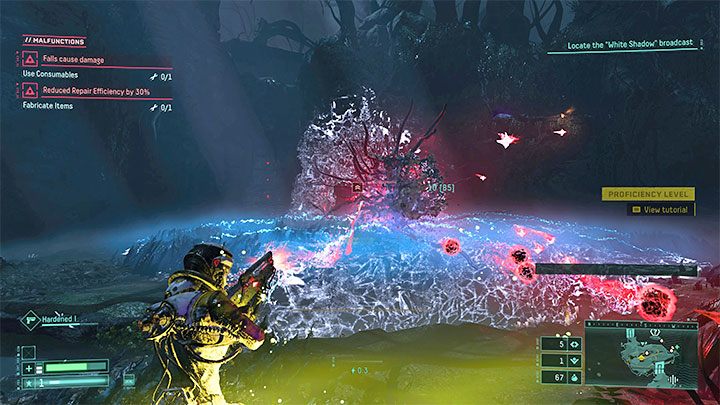 In the game Returnal, we shouldn't feel forced to take part in all of the difficult fights during the gameplay. Such demanding encounters may weaken the main character too much or result in her sudden death if she was already seriously wounded and poorly equipped when the battle occurred. At first, we should try to visit those locations that will allow the protagonist to increase her statistics and get better weapons and consumables.

In particular, we should be careful when confronting mini-bosses - these fights may occur, for example, after we study the projection of another player and we want to avenge their death. Locations marked with golden passages on the map are also very demanding - we can be sure that on the other side of such doors a series of challenging fights awaits us.