This page of the guide to Resident Evil Village contains a walkthrough of the Burning Village in the campaign finale. You will learn how to attack enemies effectively when playing as Chris, how to defeat Urias Strajer in a boss fight, where to find the Megamycete and how to reach the underground laboratory. 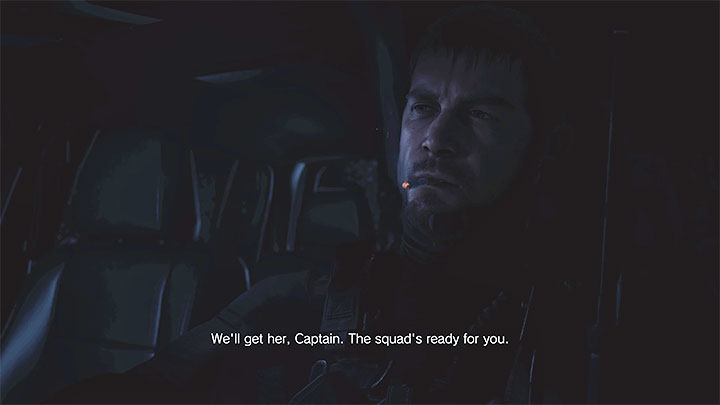 In the first part of the Resident Evil 8 finale,you will play as Chris. It's worth taking a moment to go through his unique starter equipment, which will differ from Ethan's: 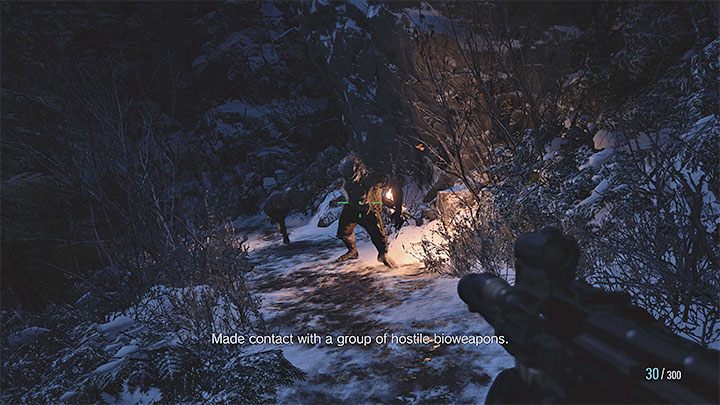 You will start in the forest, and there is only one path to the village. Expect regular monster encounters as you follow the linear path towards the central part of the village. Try to eliminate the monsters from a distance without letting them get close and attack you directly. 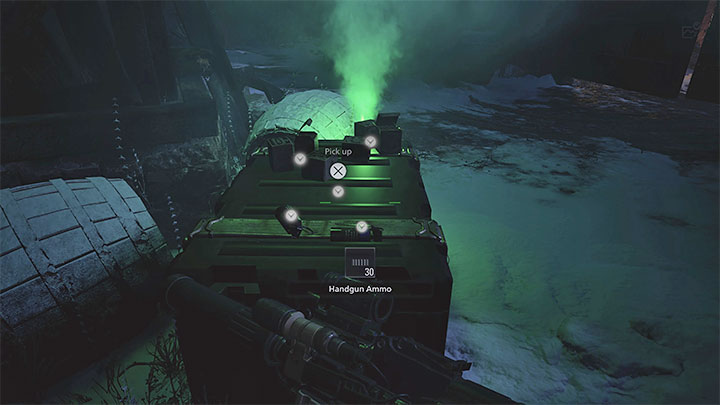 When you play as Chris, you don't have to worry about ammo, as you'll be finding quite a bit of it along the way (this concerns the default difficulty level - it can be harder to find ammo on higher difficulty levels, for obvious reasons).

Look specifically for the areas marked with green flares (see picture). Some of these will be on the main path, but others may require you to deviate from it and explore side areas. 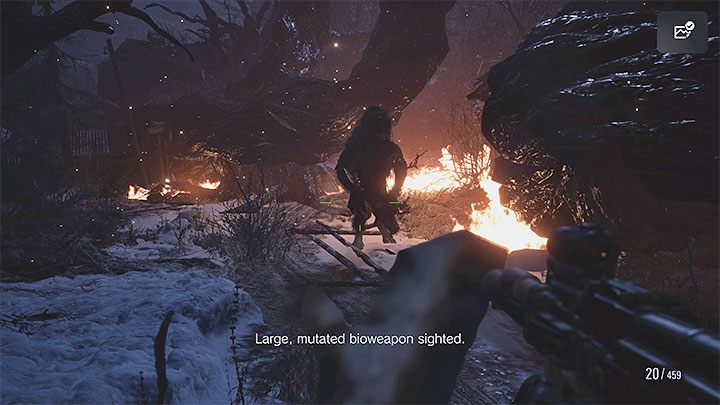 Later, expect to encounter the Varcolac beasts, which are the large werewolves. They need to be kept at bay even more. Consider using the flash grenades to stop their sprint. 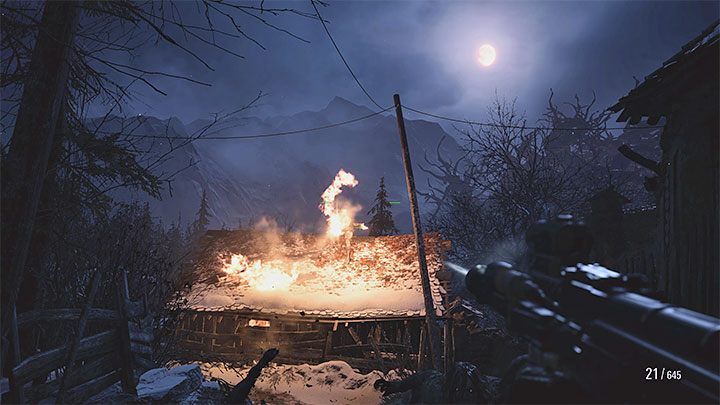 You also may have some problems with the Lycans that sit on the rooftops. It's worth using a rifle to kill them from a long distance. This is especially true in case of archers, who can deal some heavy damage to Chris, also from a distance. 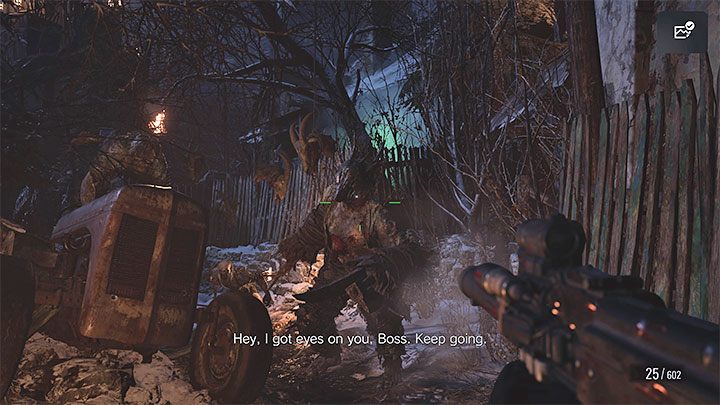 A larger, armored enemy will also appear as you go through the village. In this case, consider using at least one hand grenade to destroy at least some of the monster's armor. If necessary, start to retreat while still shooting at the enemy. 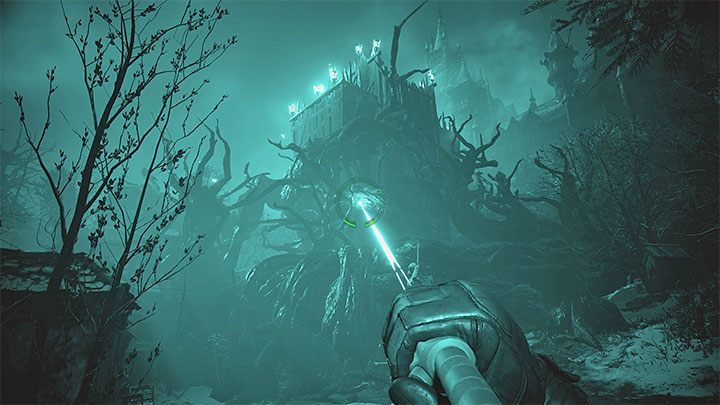 Once you reach the roots of the big tree, you will have to use the Target Locator for the first time. Select it from the inventory (by default it's under one of the buttons on the controller's d-pad) and start tracking the roots. You must fill up the progress bar completely. If Chris was attacked in the meantime, the process would be reset. 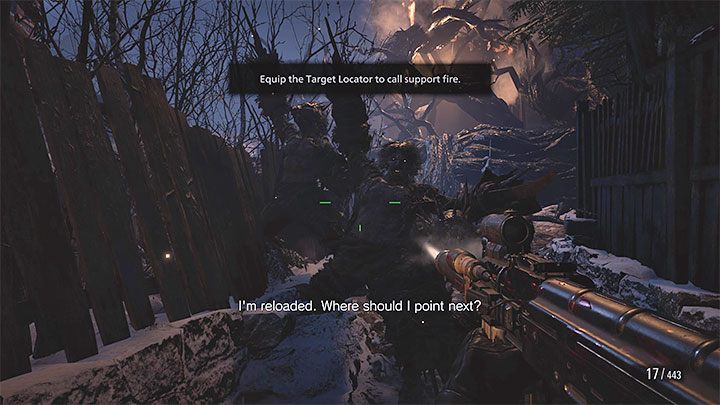 You have to defend yourself as you're waiting for the Target Locator to load. Don't stay in the same place all the time, but rather run around to force the monsters to chase you. In the side areas you can find some valuable supplies and red barrels - you can lure monsters there and eliminate them in explosions.

Keep fighting until you receive a message to fire again. Just like before, keep tracking until the bar is full. After a few bombings, the roots will be destroyed. 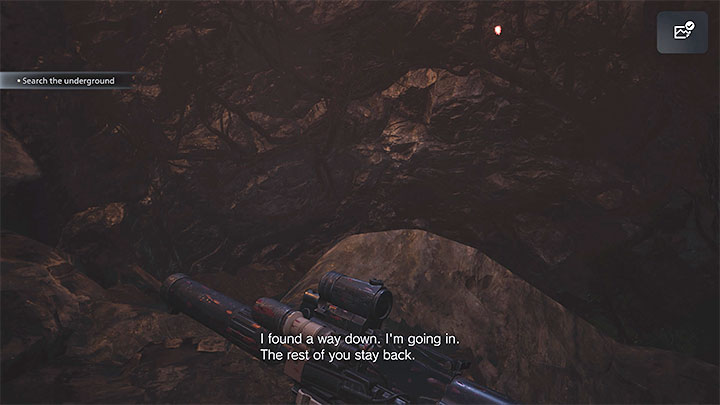 After winning the battle, take as many supplies as you can from the area and head towards the large hole in the ground that you must jump into. Pick up the supplies from the new "green" area along the way.

Once you jump down into the cave, a boss will appear - Urias Strajer. 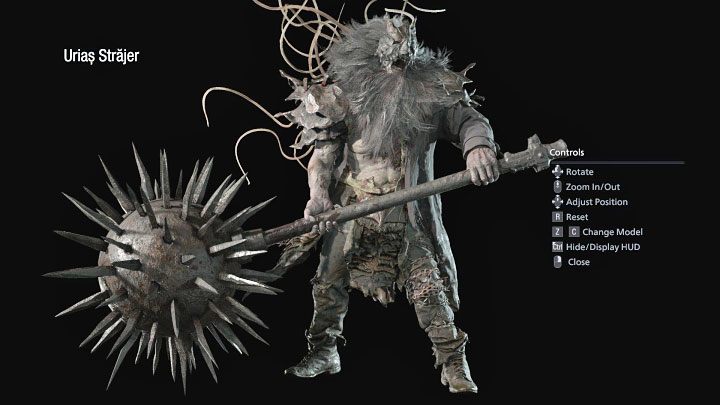 Urias Strajer is an alternate version of Urias, the boss you may have faced while exploring the Stronghold. Strajer uses a different variety of melee weapons and additionally, the front of his body is very resistant to standard attacks. 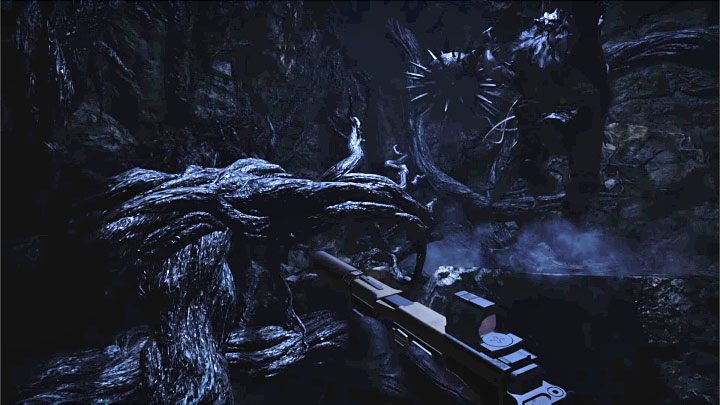 Strajer, just the regular Urias, can combine jumping from a top ledge and hitting the ground with a giant weapon. Avoiding these attacks will unfortunately be very problematic due to the very limited combat area. Try to run around the edges of the arena to minimize the risk of taking damage. 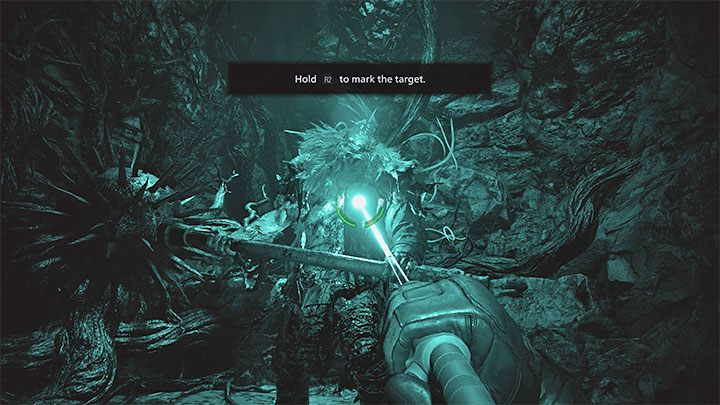 The key to winning the fight is to use the laser pointer of the Target Locator. You must wait for a radio announcement informing you that the area is ready to be bombed. When this happens, select the Target Locator from your inventory and start targeting the boss. This process takes a few seconds and will be interrupted if you get hit in the meantime. Because of this, it's a good idea to start tracking Urias right after one of his bigger attacks in order to have enough time before the boss launches another attack. 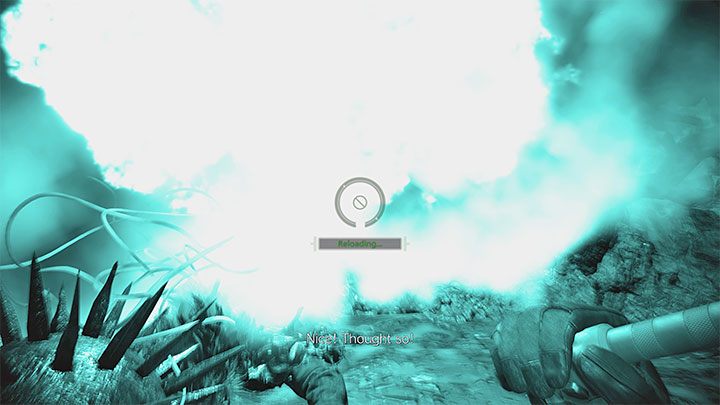 Urias Strajer will be fired upon as soon as the attack is fully charged. The boss will take very high damage as a result of the bombing. 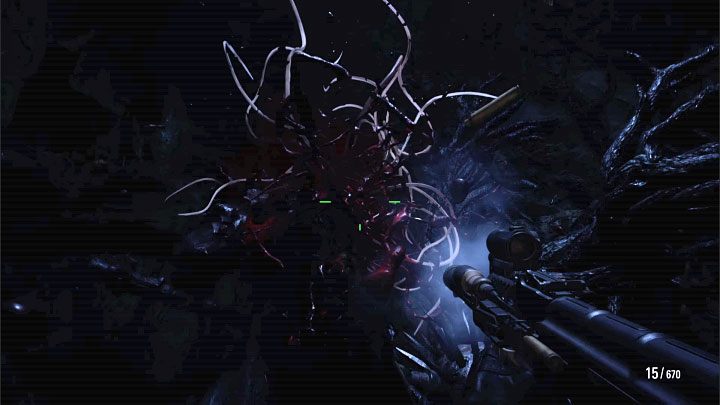 While the bombing ability is reloading, try to shoot at the boss's back. They are the weak point on the monster's body. However, it's not worth wasting ammunition shooting at the beast's chest, as it is immune to regular attacks. 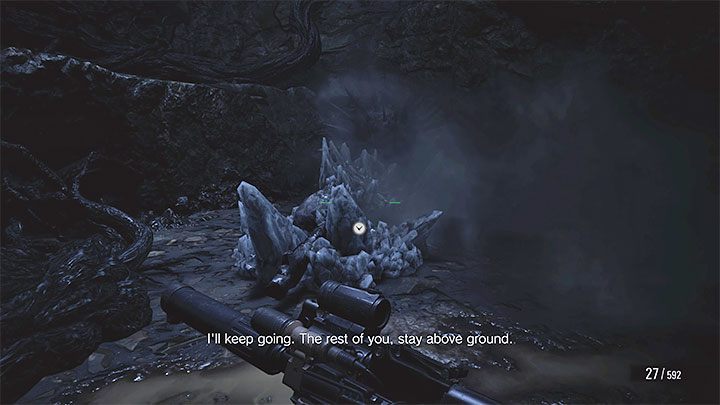 You must repeat this pattern until the very end of the battle - run around the small arena a lot to get hit as little as possible, use your bombing ability as soon as it's ready and shoot at Urias's back while waiting for the Target Locator to be available again.

Upon defeat, the boss will drop the Giant Crystal Mace treasure. 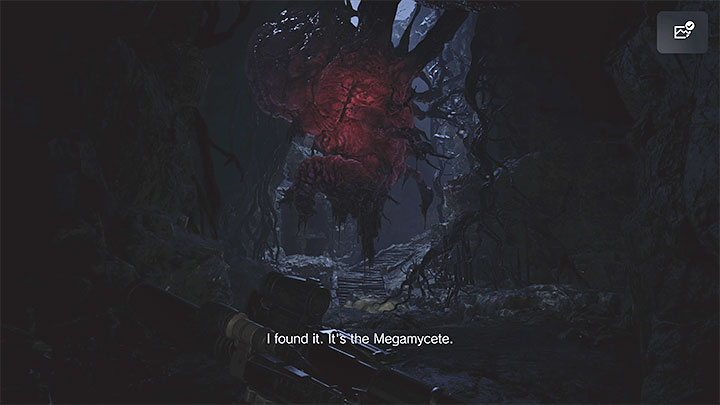 You can now move on. Chris will soon reach a cavern with the Megamycete on which he will plant an explosive that he will want to detonate later. 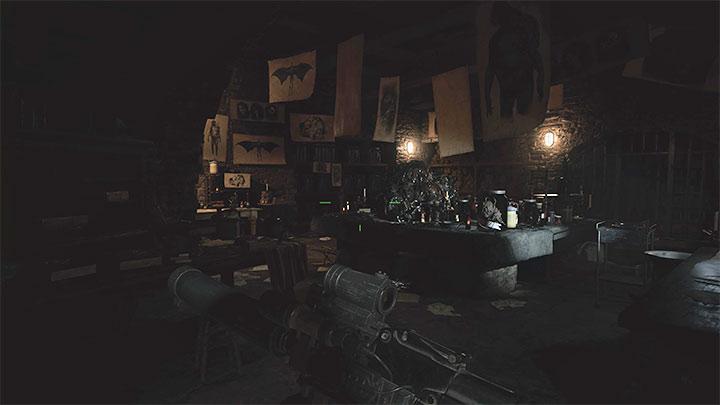 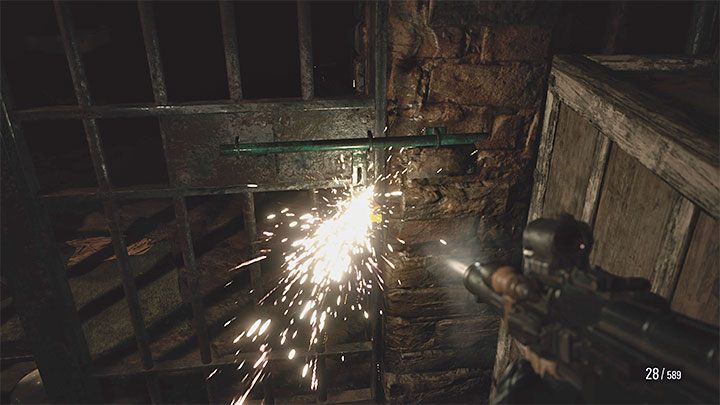 Keep going further through the underground. Eventually, you'll arrive at a large lab visible in the picture above - here you can examine the numerous files, interactive objects and books. Many of these items are collectibles.

To complete Chris's scene, reach the cage with the padlock and destroy the padlock with any weapon.