This page of the Resident Evil Village game guide contains a walkthrough of the initial stages of the Dimitrescu Castle, the second main location on the world map. The following guide explains how to get out of the bedroom after the main character is captured by vampires, how to defeat the first vampire daughter, how to get to the castle courtyard and more. 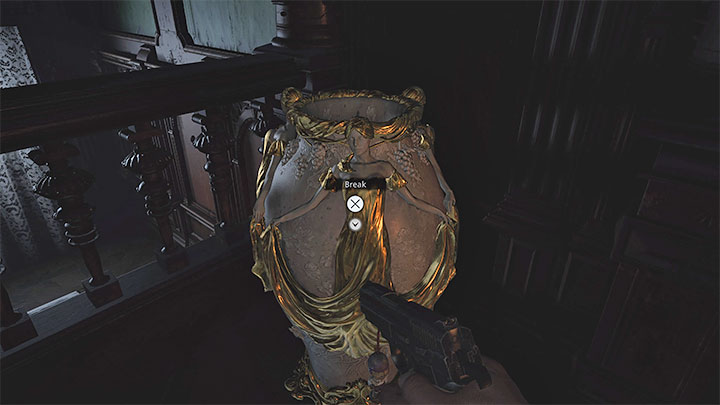 Exploring the castle is similar to exploring the village. Many areas will initially be inaccessible and this will gradually start to change only once you acquire keys and other quest items, and as you opening up entry points from other parts of the location.

While exploring the castle, remember to look around for loot and interactive items/devices. It's also easy to miss a chance to destroy the large vases similar to the one in the picture. Use a knife to do this; each vase contains some random loot. The game also allows you to break open some furniture with glass display cases and they can hide small treasures. 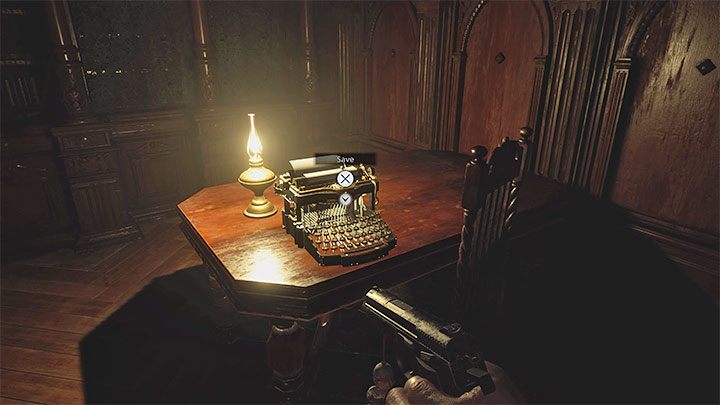 Once you reach the large Hall of the Four, it's worth exploring the adjacent smaller Merchant's Room to the south. It has three main features: 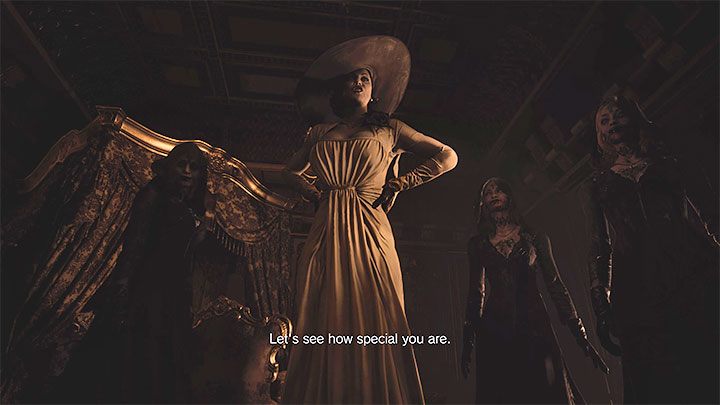 Return to the Hall of the Four. While trying to examine the plaque on the west door, vampires will appear. A series of cutscenes will follow - the hero will be captured and interrogated by Lady Dimitrescu. 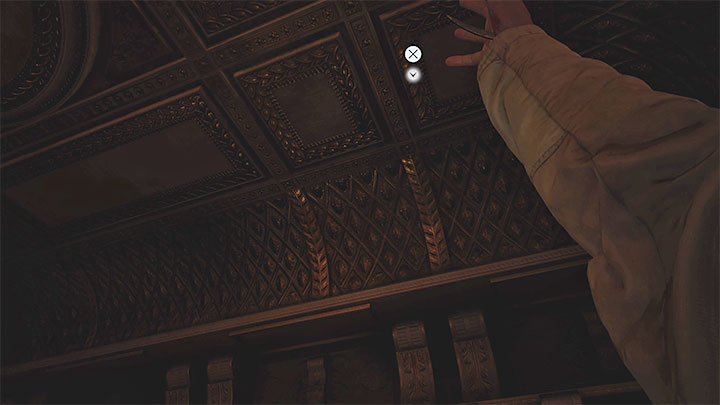 Your new task is to get out of the Bedchamber, with you having to get Ethan downstairs first. Look up to spot the hook on which Ethan is hanging. Press the interaction button for the hero to get off the hook. 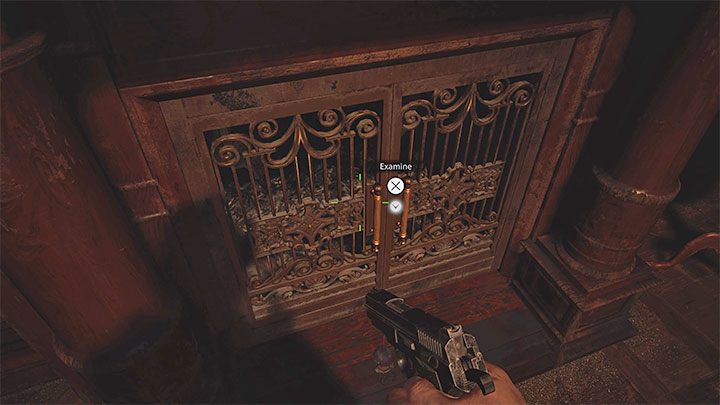 The exit from the sleeping chambers is locked. You must interact with the fireplace and pass through the resulting opening. 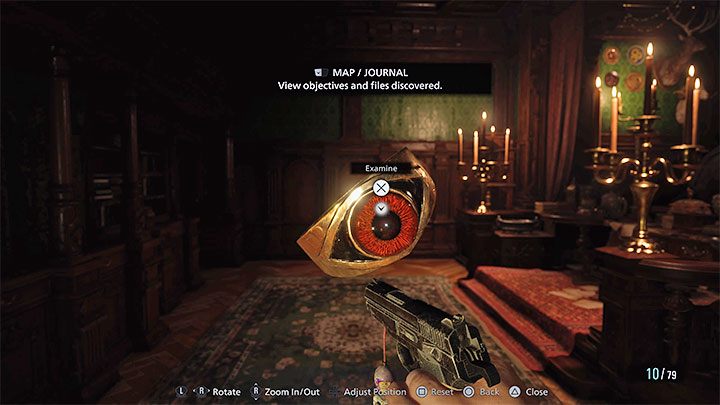 You will reach a statue of a woman holding a baby in her hands. Interacting with the statue will earn you the Maroon Eye Ring and unlock a passage. Ethan will get out of the sleeping area.

Examine the ring in the inventory right away. Rotate the ring to focus on the eye. You can pull it out of the ring to obtain the Maroon Eye quest item. 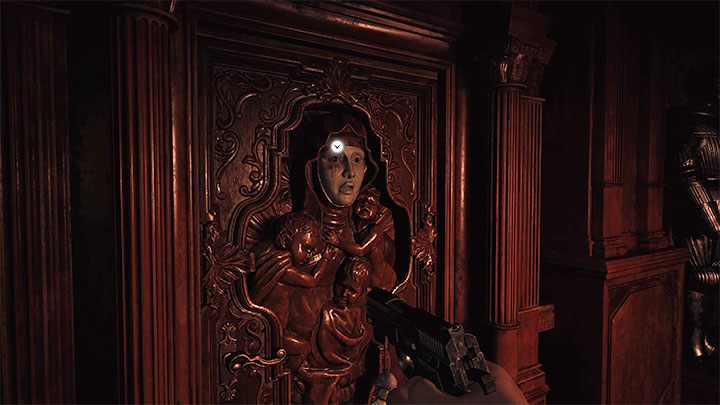 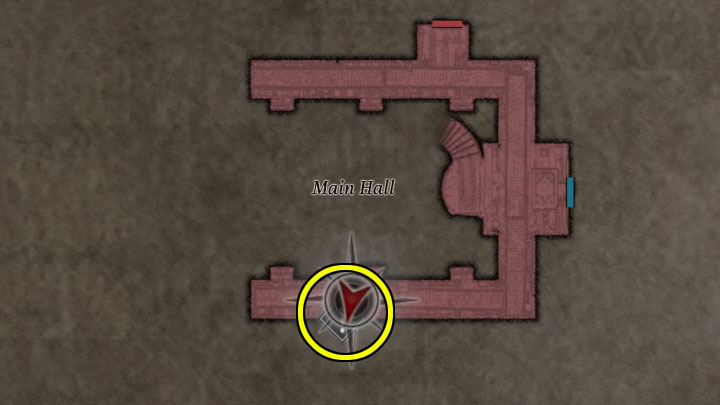 Busts will appear in the Hall of the Four, but you can't solve this puzzle yet. First, you will have to find four masks in different parts of the castle.

Proceed to the Main Hall and use the stairs to reach the upper floor. On the south side of the upper balconies is the Prioress Door showcased in the images above. The main character can place the Maroon Eye in the door, specifically in one of Mother Superior's eye sockets. This will unlock access to new rooms in the castle.

Getting through the castle cellar 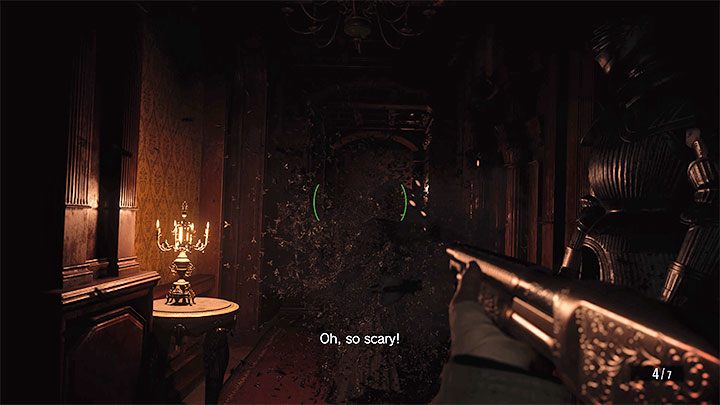 Upon entering the new location, you will encounter a vampire. This is not yet the place to fight a full-fledged battle with her and your only goal will be to chase away Lady Dimitrescu' s daughter - by using any weapon, you can temporarily make her turn into a cloud of flies.

Take the opportunity to run through the hallways to the Dressing Room. There you will find boards that can be torn out to unlock a passage, allowing you to progress further. You will be able to descend to the basement. 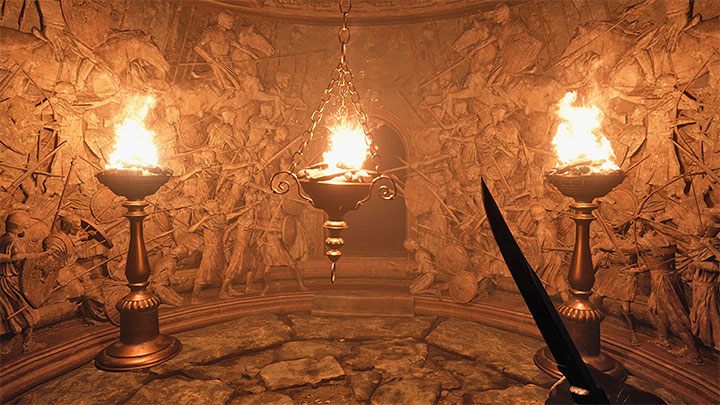 While exploring the basement, you will notice Lady Dimitrescu in the Tasting Room, but she's not a threat to Ethan right now. The main character will be heading towards the Hall of War, where you will have to solve a mini-puzzle involving braziers. Your task is to push a lit brazier in order to ignite the two neighboring ones. This will unlock a passage. 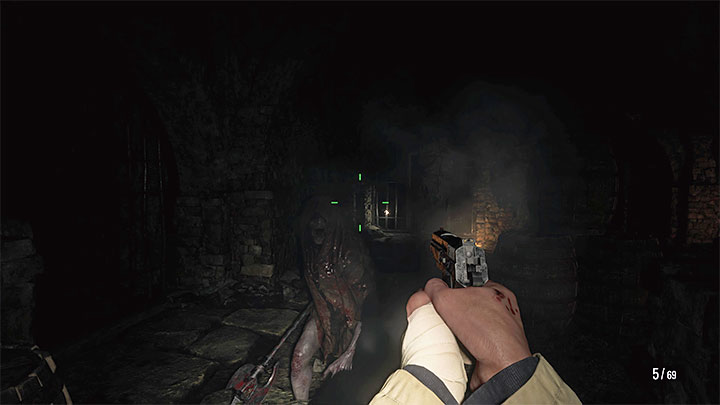 You can progress now. You will have to complete two larger basement sections. In the first one, you will find some loot and 2 secrets.

The second area is the Chamber of Solace and be prepared to encounter monsters that are not easy to spot in the dark. You can eliminate enemies one by one, or try to run through this part of the basement (the enemies can be relatively slow), but you won't be able to collect 100% of the loot this way. The monsters are not strong, but they can appear in unexpected places - they can come through gaps in walls and crawl out of holes in the ground. 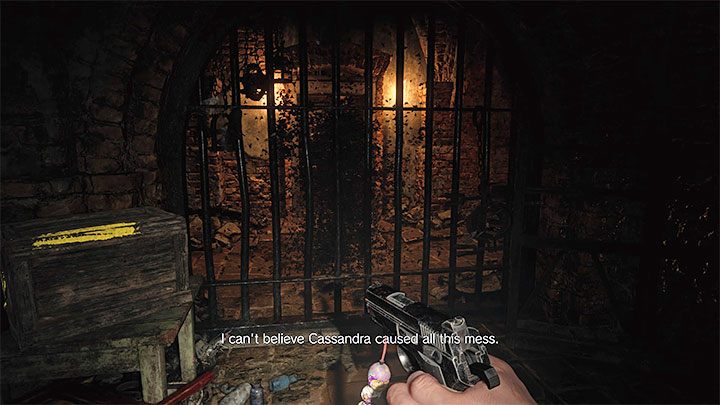 When you reach the next part of the dungeon, ignore the locked gate you pass on the way here, because it requires a key you'll find later in the game - you can find a walkthrough of this location on the Treasure Map - where is the treasure? page.

Not long after walking past the locked gate, one of the vampire daughters will appear again and this time you will have to take the necessary steps to end her existence. Once she appears, don't try to attack her right away, as she will turn into a swarm of flies and receive no damage. Instead, go through the basement in a linear manner - you have to turn right or left in the right moments to avoid blocked pathways. Eventually, you will reach the stairs located behind the place where the vampire appeared. 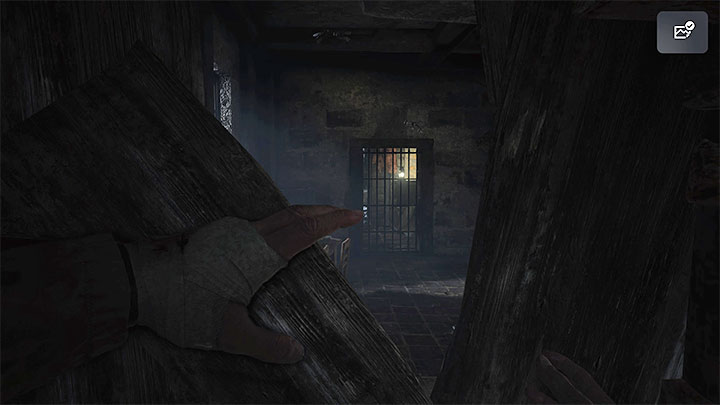 As you escape, it's a good idea to look around for supplies, which will include ammunition for your pistol and shotgun, as well as ingredients for crafting more ammunition. Ethan needs to reach the boarded barricade and after he interacts with it, he will start pulling the boards out. There will be a scene where the vampire catches Ethan, but this is scripted and you don't have to worry about it. 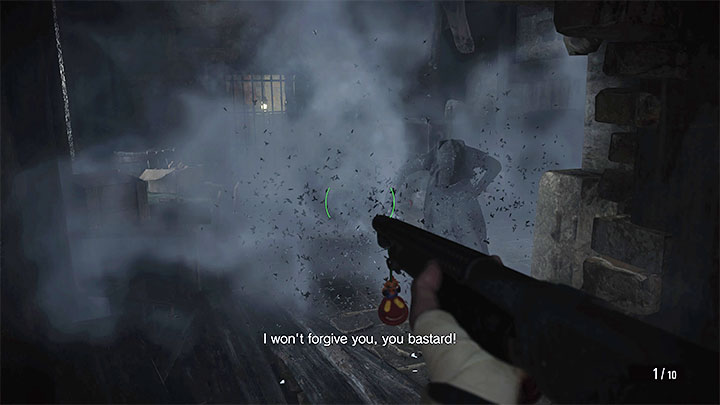 A shutter will be broken in the room, which is an important hint on how to win the fight - Lady Dimitrescu's daughters are sensitive to the cold. This means that you should attack your opponent when she gets near the destroyed shutter - this is where the icy air enters the castle room. She will then be susceptible to gunfire - it is best to use a shotgun at first. Only after you run out of shotgun ammo should you switch to a pistol. 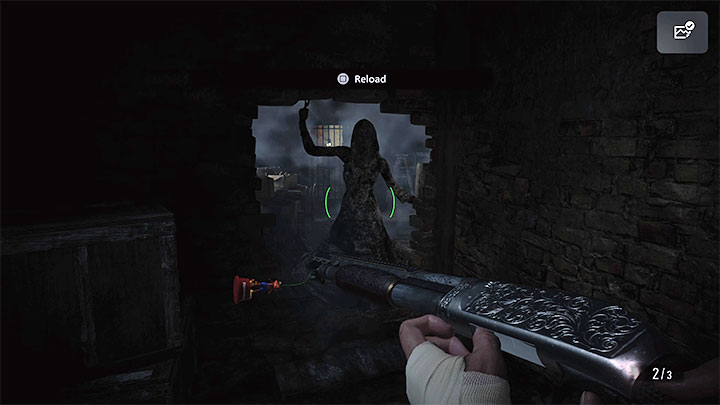 Stay near the shutter, wait for the vampire to appear, and keep attacking her. The fight shouldn't be very long. After receiving enough damage, the vampire will turn to stone and then fall apart.

For defeating the first vampire daughter, you will earn the Crystal Torso Treasure.. It's worth selling to the merchant Duke as soon as you have the chance. 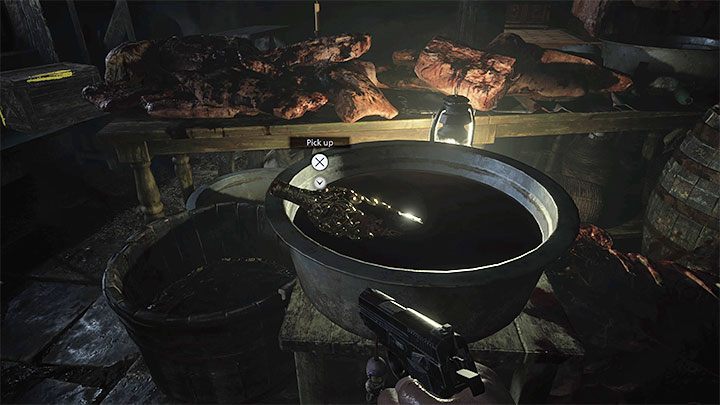 After defeating the first vampire, continue on to the Kitchen. You will find a Sanguis Virginis wine bottle submerged in a bowl.

Proceed to the adjacent corridor, where you will find, among other things, a trumpet and a suitcase with the LEMI Recoil Compensator weapon upgrade. Head out the door leading to the Dining Room. 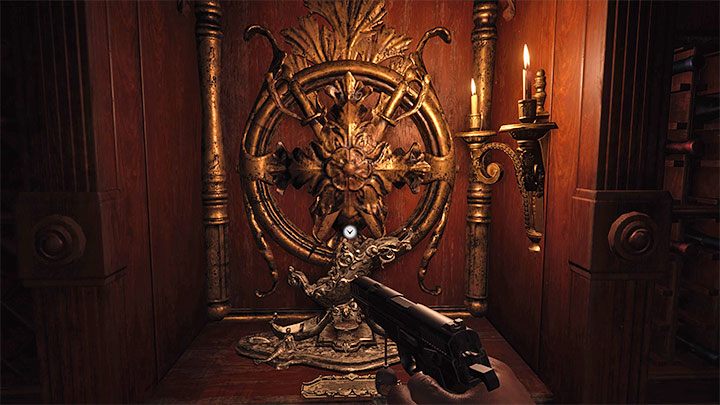 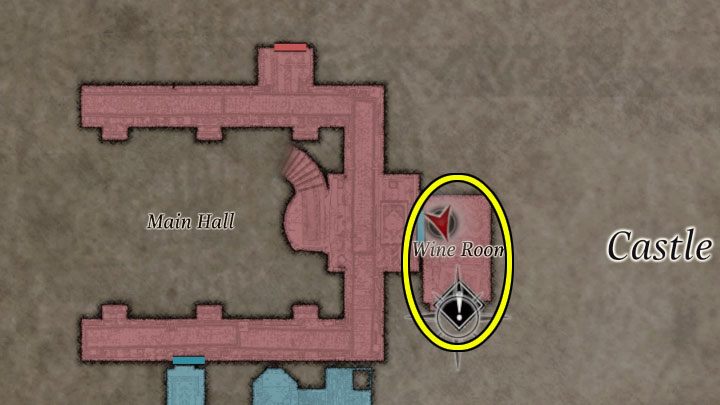 From the dining room, you can head towards the Main Hall. Head to the upper floor and explore the Wine Room to the east. You must use the recently acquired wine bottle on the Silver Flower Bottle Stand.

A cache will be unlocked. By examining it you will find, among other things, the Courtyard Key. 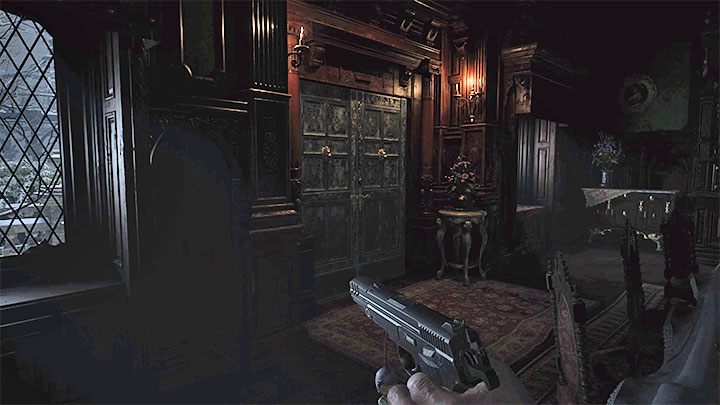 The door leading to the Courtyard is located in the recently explored Dining Room.