This page of the Resident Evil Village guide contains a walkthrough of the first major battle in the village, which will occur shortly after you start exploring it. You'll find out how to survive the big battle with the Lycans as well as how to get your first weapons - a knife, a pistol and a shotgun. 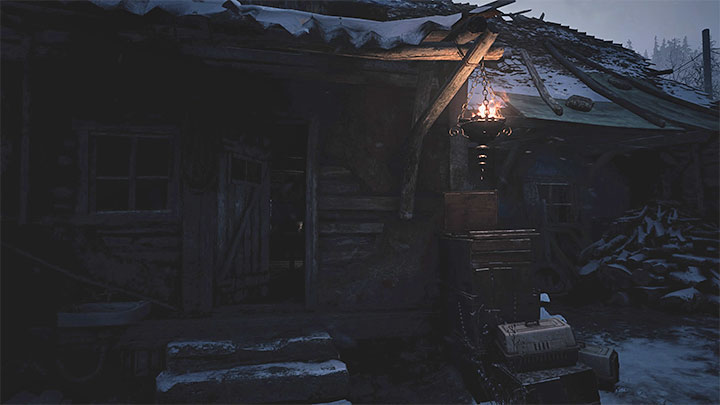 Your first visit to the village will occur after you get through the forest. As you explore the village, you will encounter inaccessible passageways and locked containers. You don't have to worry about it now, because you'll be able to go back to many of these places later in the game (after obtaining appropriate keys, key items or gadgets).

The main character needs to reach the hut shown in the picture above. Start exploring its interior. 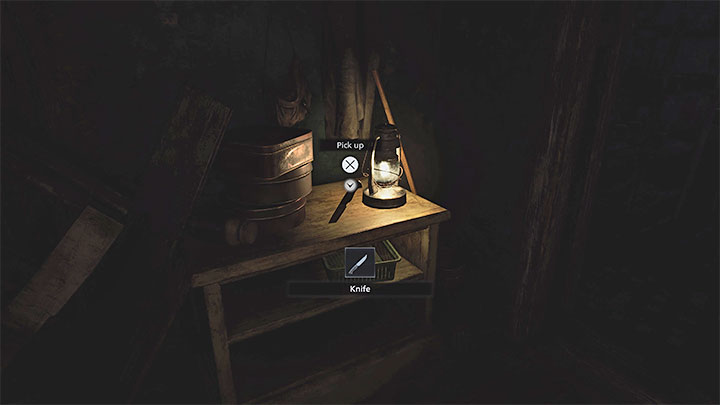 You can find a knife in the aforementioned hut. This weapon is useful not only for attacks, but also for destroying selected items in the environment in order to pick up hidden loot. It's the first chest of this kind.

Getting the LEMI gun 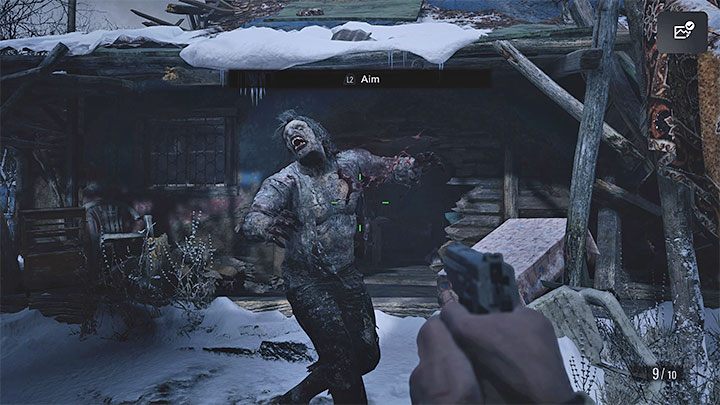 Exploring the side room of the hut will lead to a meeting with a villager. You need not fear an attack from her. What's more, the villager will hand Ethan his first weapon - a LEMI pistol.

You will need to crawl out of the hut after a sudden attack. You'll face the first direct Lycan attack. After regaining control of Ethan, be ready to shoot at the monster. Try to kill the Lycan before it gets dangerously close, as it can grab and bite Ethan, dealing extra damage. 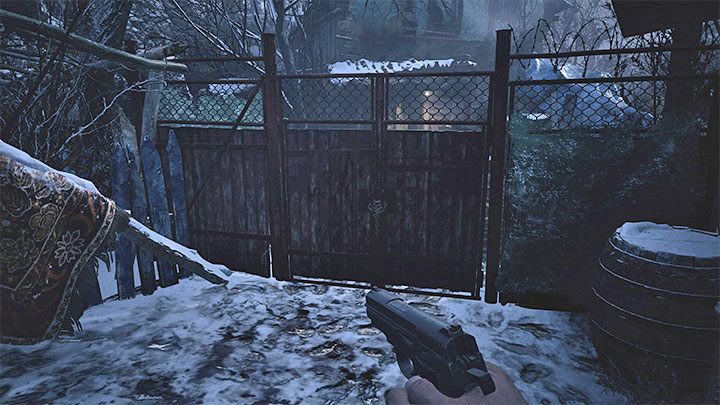 Investigate the hut again, specifically the spot where the villager was hiding. You will find Bolt Cutters there.

Bolt cutters can be used to cut chains and you will find the first such chain on a nearby gate. 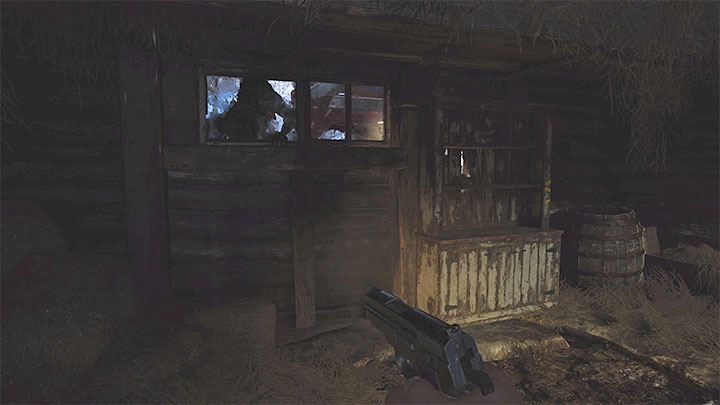 In the new part of the village, the protagonist won't have much room to move around. Ultimately, you must enter a new building in the village, where you will find, most of all, pistol ammunition.

While exploring the interior of the building, Lycans will attack. First of all, you should reach the front door of the building and move a large piece of furniture to barricade it. You can shoot monsters that appear at boarded up windows. At least one lycan will get inside. Be ready to deal with it. Unlock the exit from the building only after the attack is over.

A big battle with lycans and getting a shotgun 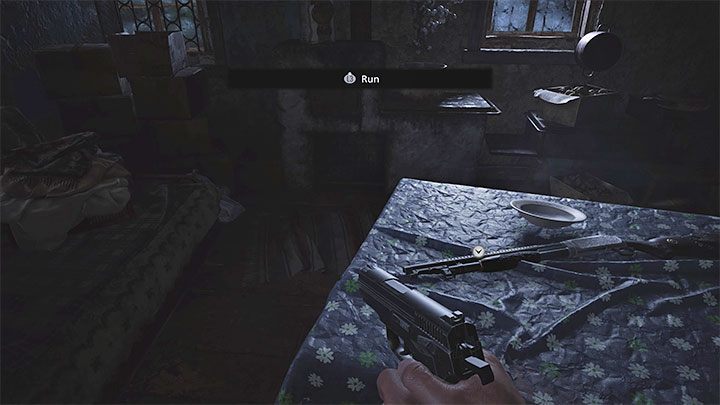 After leaving the hut, you will notice that lycans have gathered in the area - they will be spread out on the rooftops and will guard some of the paths. The monsters will not attack Ethan right away. You can use this to initially look around the area, as well as destroy chests and collect additional loot.

Ultimately, head for the hut adjacent to the one where you've recently defended yourself. Shortly after entering the second hut, the Lycan attack will begin. Collect the surrounding loot quickly, which includes the M1897 shotgun. 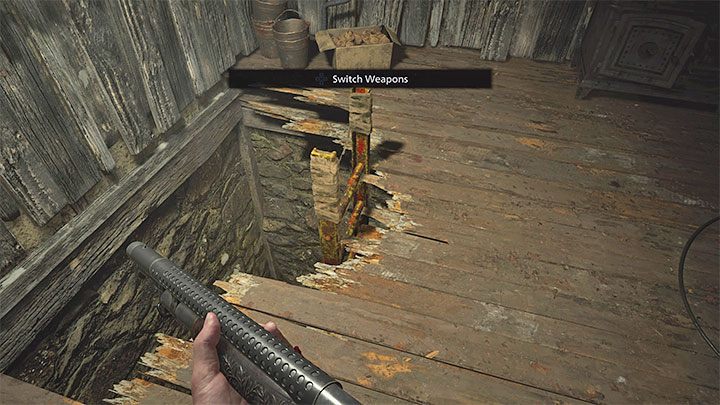 The fight against the Lycans is not as difficult as it might seem. It serves, to some extent, as a tutorial on how to fight monsters. You will learn some new things that will be useful in later clashes.

After taking the shotgun, you have two main options: 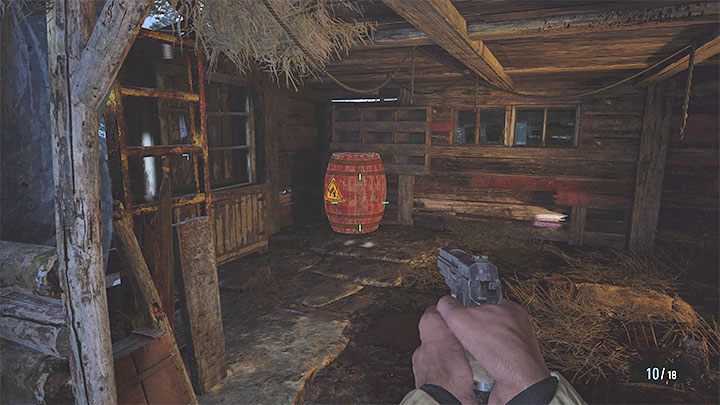 In one of the next huts, Ethan can barricade himself in by moving a piece of furniture. You can shoot monsters through the shutters. Additionally, after the lycans get inside, you can shoot at the red barrel and cause a massive explosion that will knock down and/or kill surrounding monsters.

Another red barrel is by the path leading to the (closed) gate. Again, you can fire a shot at the barrel after monsters approach it. 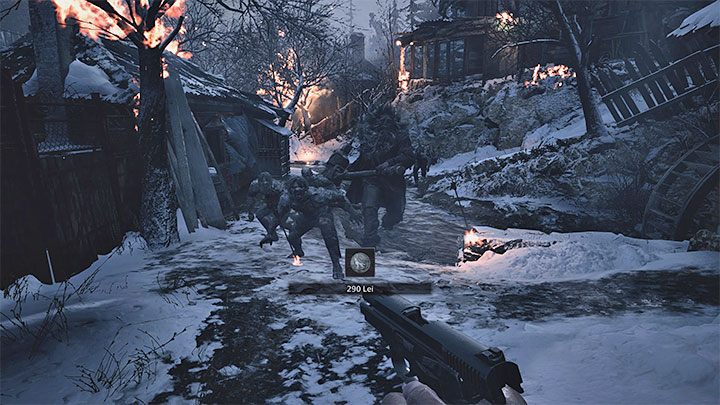 The battle described is also a good tutorial on how to keep the hero alive. Attack those lycans that get too close to Ethan. Use the shotgun for knocking down the monsters and the pistol when you have the possibility to carry out a less dynamic attack. The protagonist can and should be healed - the game warns you when he is on the verge of death. You can also try to block attacks by holding down the Guard button.

Later in the fight, the "regular" lycans will be joined by a larger, elite individual with a large hammer. Stay away from it and rely on the sprint option when needed, which is unlimited in this game. 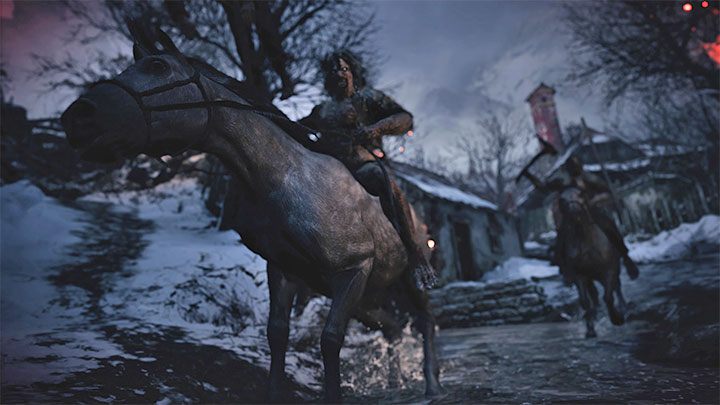 You don't have to win the Lycan battle by killing all the monsters. After you have withstood the monster attacks long enough, a cutscene will automatically start and mysterious riders on horses will appear. It will end the fighting here. 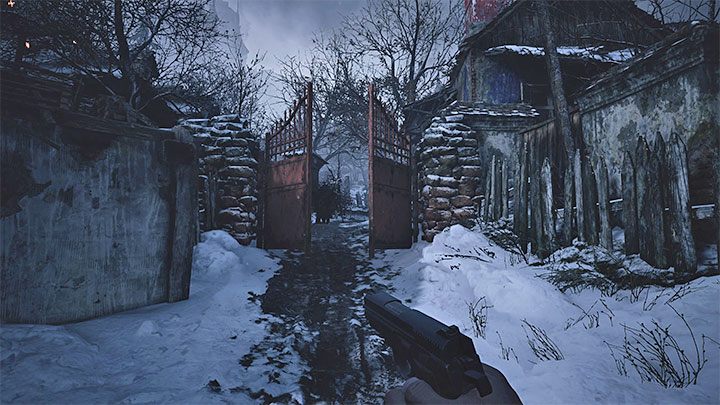 After the battle is over, it is a good idea to explore the entire battle area to collect as much loot as possible.

Now head for the gate where the old woman appeared. Ethan will chat with her for a bit, learning about Mother Miranda and about Rose and the need to find her.

Exploration of the cemetery and church 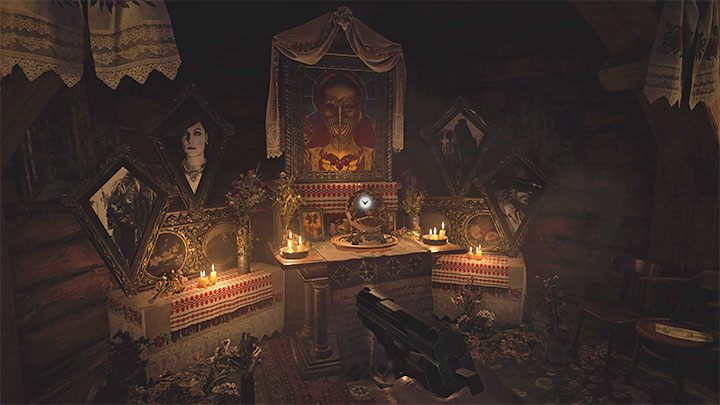 You can resume a fairly linear exploration of the village. All surrounding gates are closed and the only path leads through the Graveyard. In the cemetery, Ethan will come across a gate leading to the castle. This puzzle can't be completed now because you will need to get two crests first.

Investigate the Church next to the cemetery. Inside the church, you'll find the Maiden Crest (the first of two to be used on the gate). A note found in the church suggests that the second crest can be found in Luiza's house. 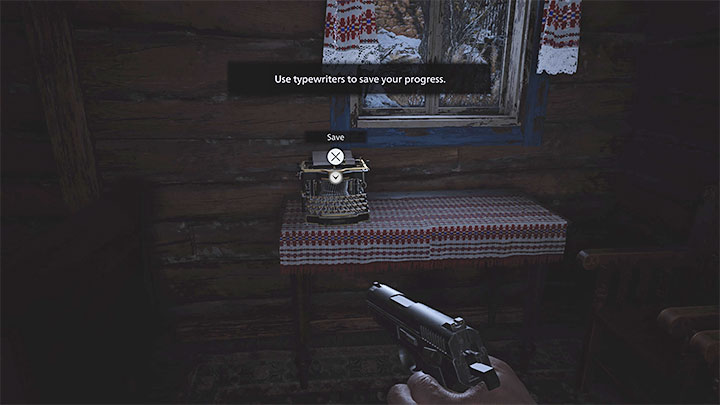 You will also find the first typewriter there. You can use them to create manual saves. Resident Evil Village can automatically save your progress, but still, consider protecting yourself and create manual saves from time to time as well (preferably on separate slots - there are 20 available ones).