On this page of our guide to Resident Evil 3 Remake you can find a detailed walkthrough of the final part of the main story campaign. These are primarily the two final battles with Nemesis boss, which take place during the exploration of NEST 2. Our walkthrough explains how to survive each of the battles against Nemesis and how to defeat the main boss each time. 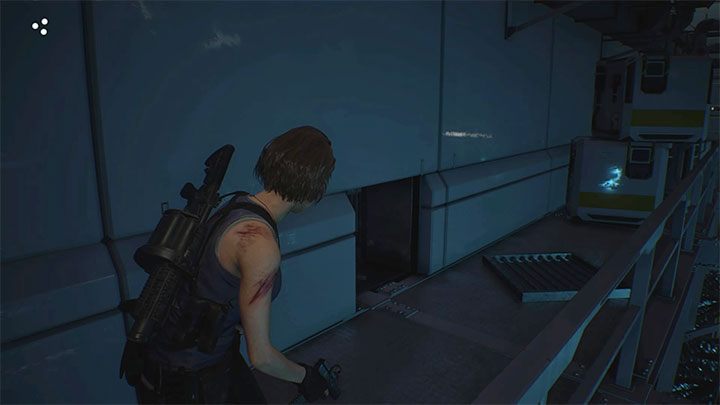 Nemesis will attack Jill again after she's managed to produce the vaccine. After regaining control of the heroine, run towards the entrance to the vent. 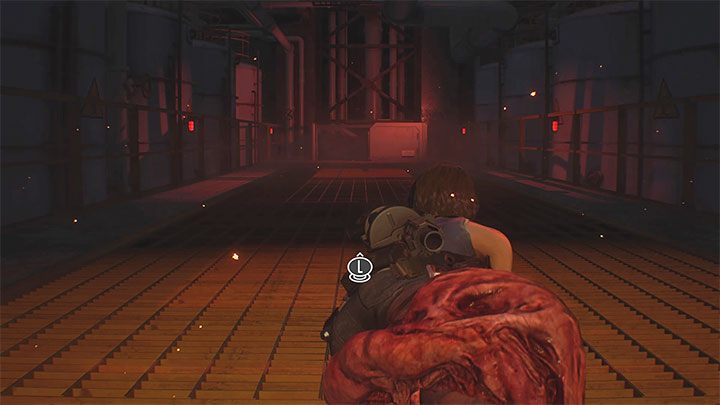 The next scene is partially interactive - you just have to crawl forward, that is, use the left analog knob (tilt it upwards).

After the next cut-scene you will end up in the Workers' Break Room. Make sure to save the game and take as much supplies as possible. A new duel with Nemesis will begin pretty soon. We recommend that you equip yourself with a grenade launcher, magnum, shotgun and as much ammunition as possible. Also, remember to take at least 2 strong healing items with you. 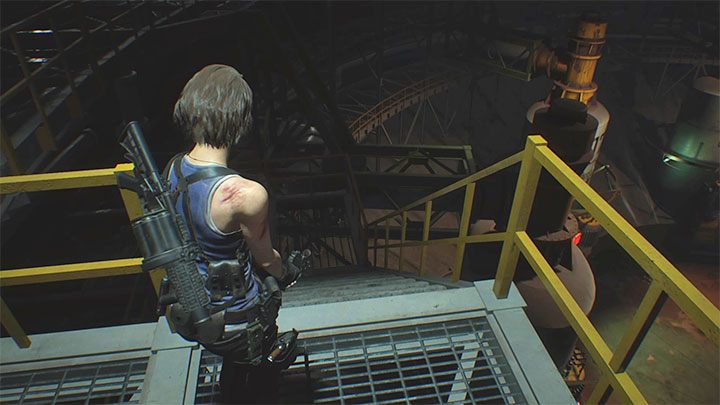 The third mandatory duel with Nemesis will start shortly after leaving the Workers' Break Room and trying to take the stairs shown in the picture. You have to defeat a Nemesis Stage 2 and the battle takes place in a large round tank. 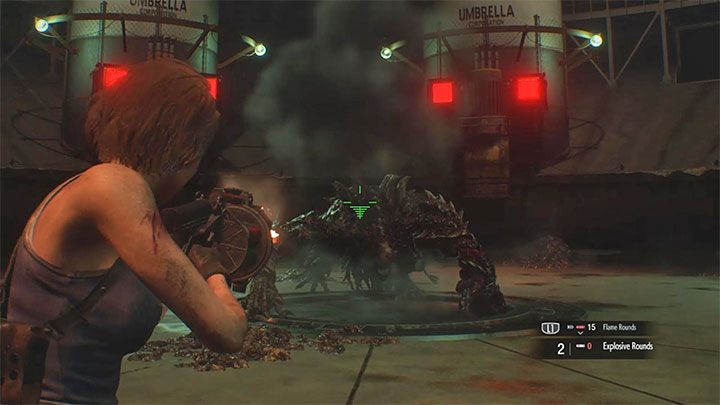 In the first part of the fight, it is best to attack Nemesis with a grenade launcher. A few hits should be enough to keep the boss in place. Grenade launcher rounds will make it significantly harder for Nemesis to move towards Jill. 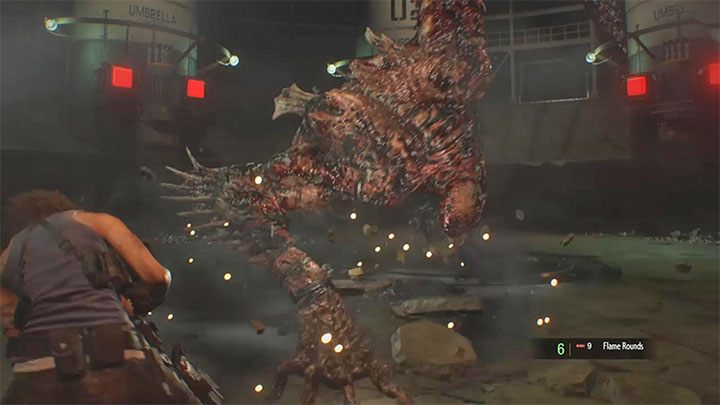 As with the previous fight at the clock tower, Nemesis will try to use melee attacks. The most dangerous ones are powerful upper limb ground slams, leaps, and charges. Try to keep a safe distance from the monster and dodge to the side when you see that he is planning to hit the ground with his paw or charge at you. 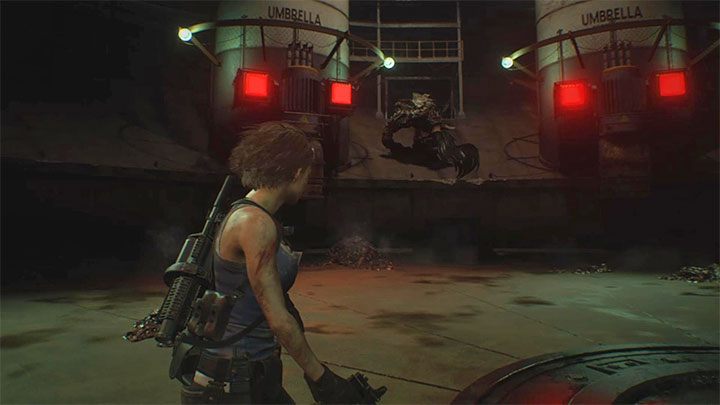 The second part of the fight will start after a short cut-scene showing Carlos. He will help Jill figure out where Nemesis is hiding.

During the second phase of the fight, Nemesis will run around the edge of the arena from time to time. Don't attack him then, just do other activities - attack regular zombies and pick up supplies. 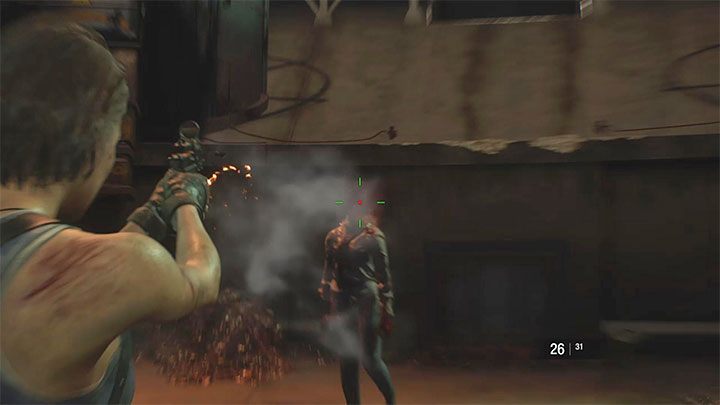 Unfortunately, regular monsters will also appear in the arena. We don't advise ignoring them completely, because there's a high risk they will attack Jill from behind while you are busy fighting Nemesis. There are two main ways to solve this problem: 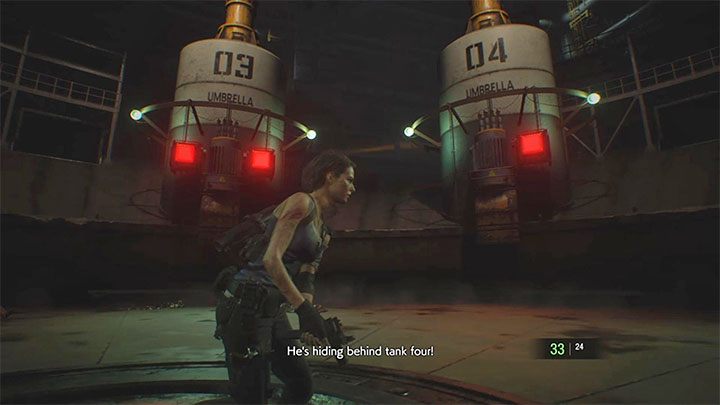 Nemesis will be hiding behind the tanks - listen to Carlos' comments. He will give you the tank's number. In the example above, you can see Tank number 4. 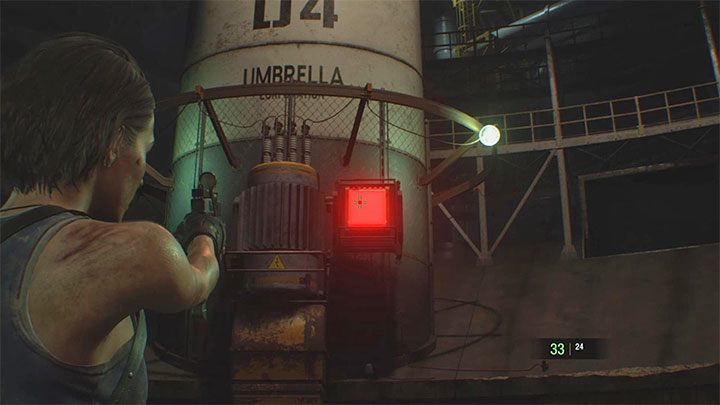 Find the tank quickly and shoot 1 or 2 red buttons. Nemesis will get electrocuted.

Note - If you miss the red buttons, the boss will jump out from the tank. If you fail to avoid this attack, you will receive a lot of damage or even die. 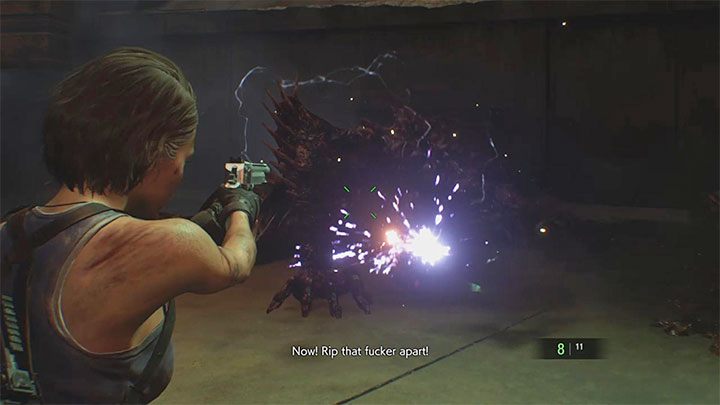 If you manage to electrocute the boss, Nemesis will fall to the ground and be vulnerable for some time. Use this opportunity to attack him. Since the boss can't move, you can use the magnum - you don't have to worry about missing any shots. 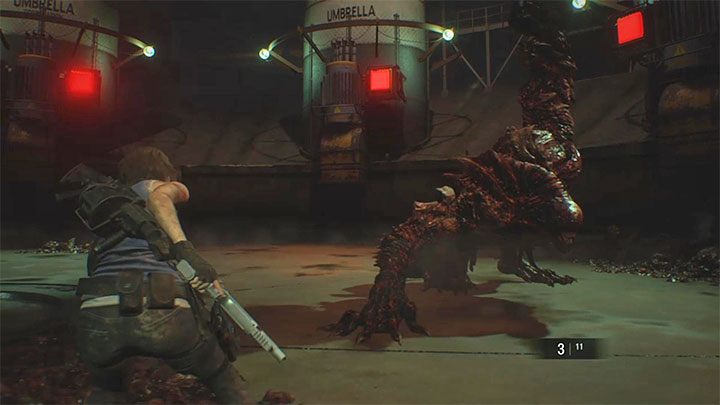 In the second phase of the fight, the boss will also begin to use stronger variations of his melee attacks. Watch out first for the attack signaled by a moving tentacle. If possible, move away quickly from Nemesis - a tentacle attack can be vertical (hitting the ground) or horizontal (making a wide swing). 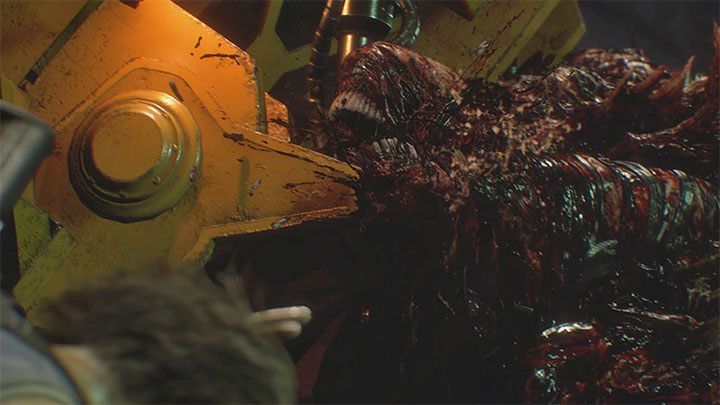 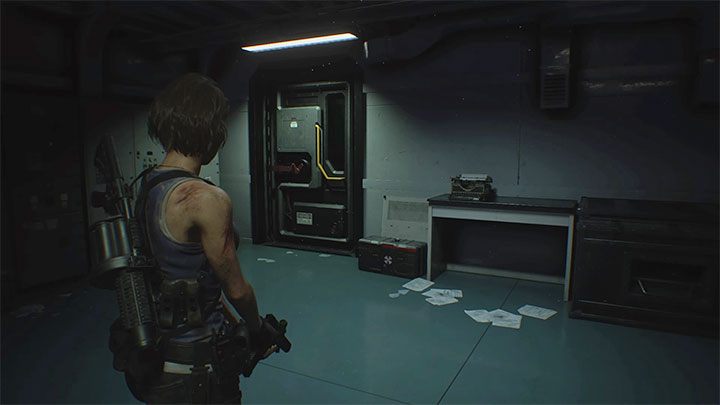 After winning the battle, you'll be in the hallway. Walk to the Workers Break Room. Once again save your game and prepare for the final battle of the game. We strongly advise you to fill the inventory with ammunition (also for the pistol) and medications.

After leaving the Workers Break Room you will walk a few steps. However, after you try to use the door visible in the distance, a new cut-scene will be activated. You have to start a duel with the final boss of the campaign - it will be Nemesis Stage 3. 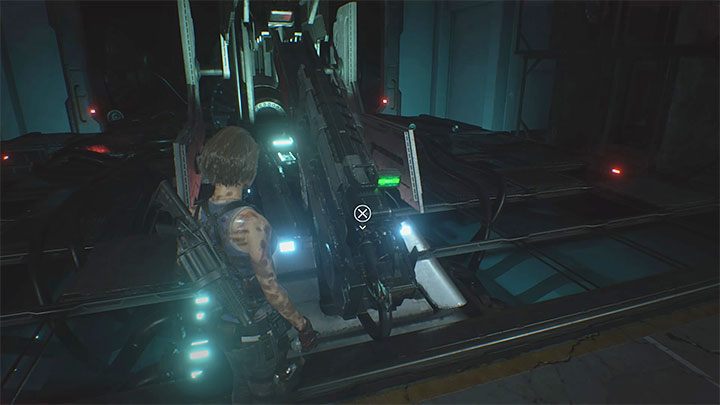 In this battle, Nemesis is a motionless giant creature, which can attack from a distance, among other things, with its massive tentacles.

Start the final battle by reaching the railgun. Wait for it to open and pick up the big railgun. 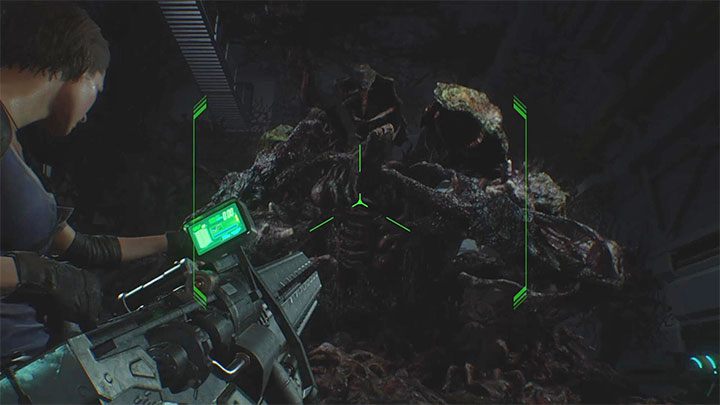 Fire it at Nemesis. You won't beat the boss right now, but he will receive serious damage. 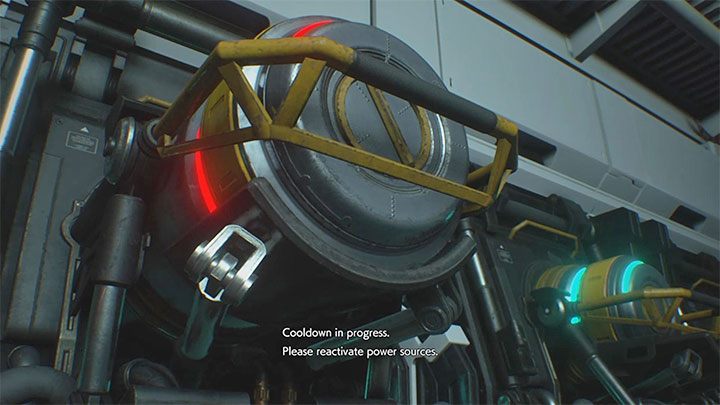 Unfortunately, there is a big problem - you have to "reload" the railgun by pushing all the red tanks. Don't do this right away - Nemesis can interfere deal you massive damage. 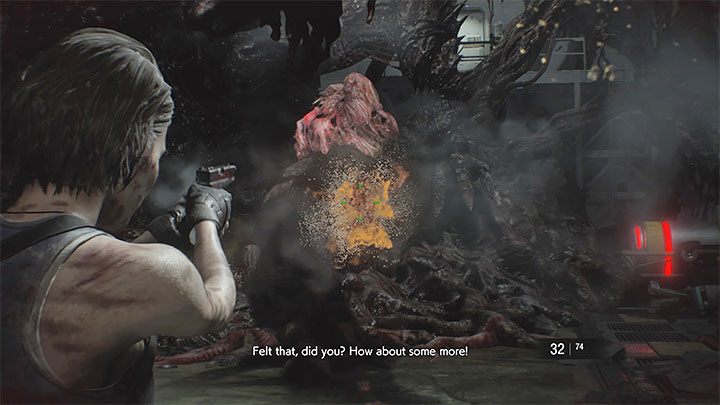 Your job is to shoot at the cysts that appear on the boss's body. You can use any weapon, even the regular pistol. 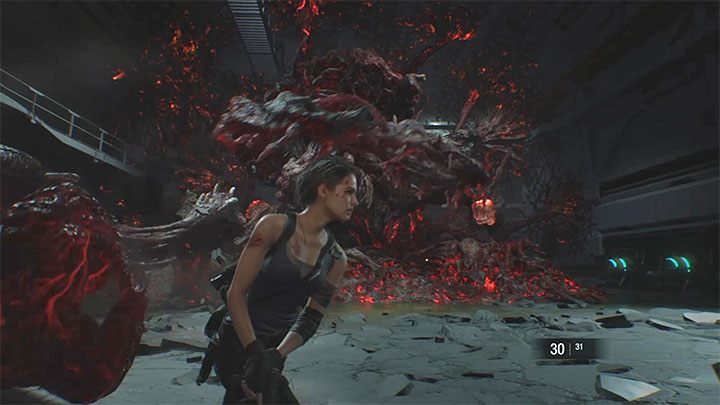 Nemesis won't remain idle during this part - you have to avoid his tentacles attacks. The boss has several attacks:

The boss can also spray acid. Fortunately, avoiding it is very easy - just stand on the opposite side of the arena. 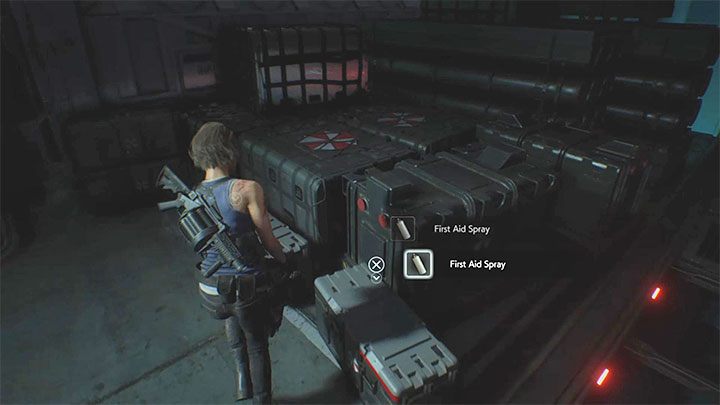 If you run out of ammunition or medicine, you will find plenty of supplies in both corners of the hall. Don't forget to avoid Nemesis' attacks when you are running towards them. 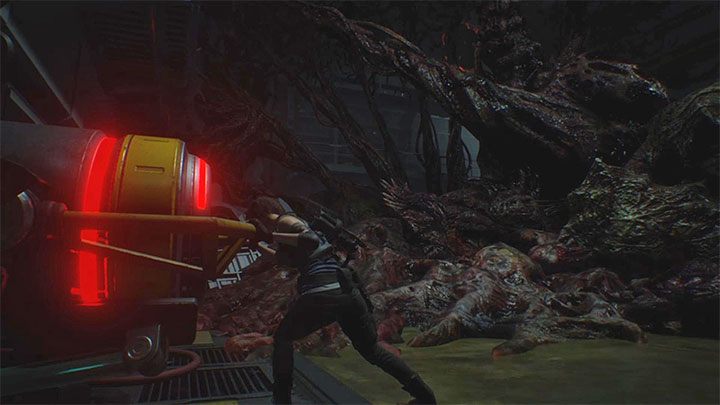 Go to the red energy sources after all the cysts have been destroyed - Nemesis won't attack for a brief moment. Every time you reach a tank, you have to hold the interaction button to push it back into the slot and change its color from red to blue. 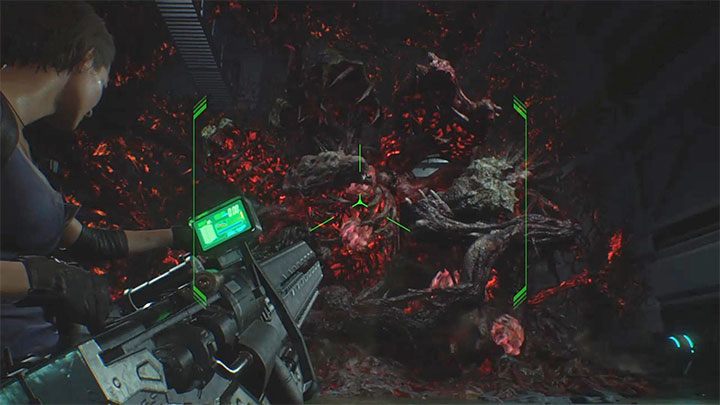 If you hurry, you should be able to activate two energy sources before Nemesis resumes attacks. This means you will have to destroy all the cysts on his body for the second time to be able to safely reach the inactive energy sources.

Once all energy sources are reactivated, return to the railgun. Fire a second shot. 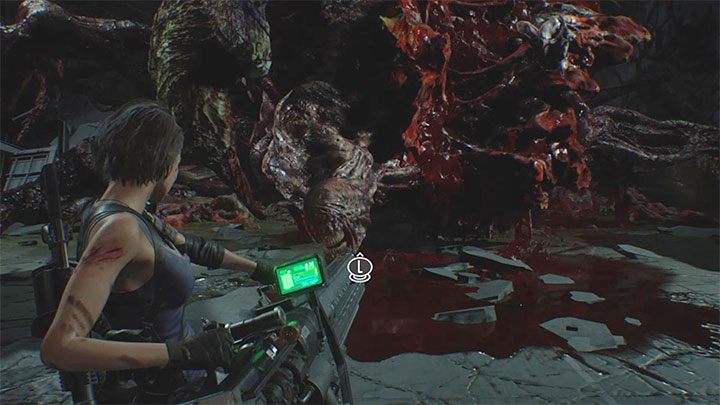 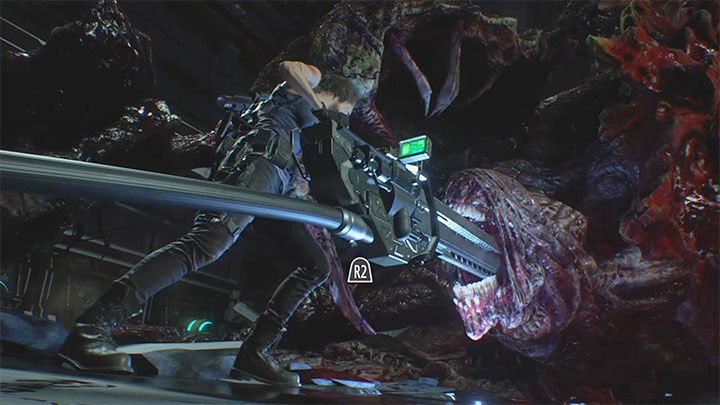 There is a very simple QTE - first tilt the analog stick up to place the railgun in Nemesis' mouth and then press the R2/right trigger to fire the final third shot. 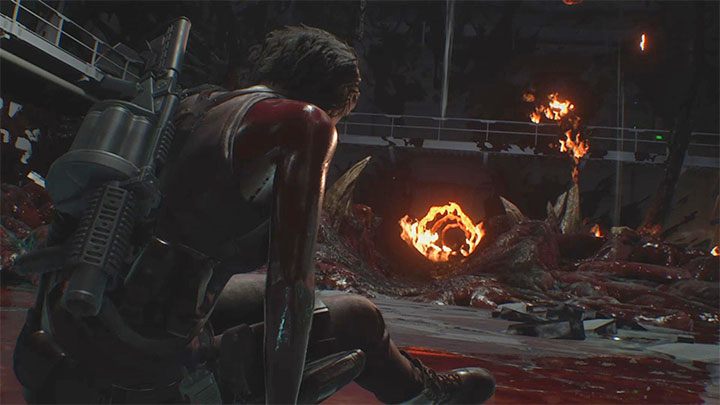 The third shot from railgun will kill Nemesis - this ends the final battle. 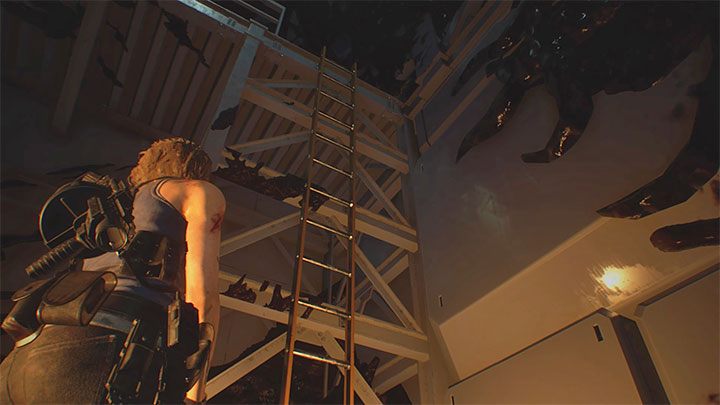 You don't have to collect supplies from the area where the final fight took place, because you won't encounter any other monsters. Walk between the remnants of defeated Nemesis and reach the ladder in the top right corner of the hall. After using the ladder, you will find the last document - find it (taking it is completely optional).

Reach the elevator, activate it and climb the stairs leading to the surface. 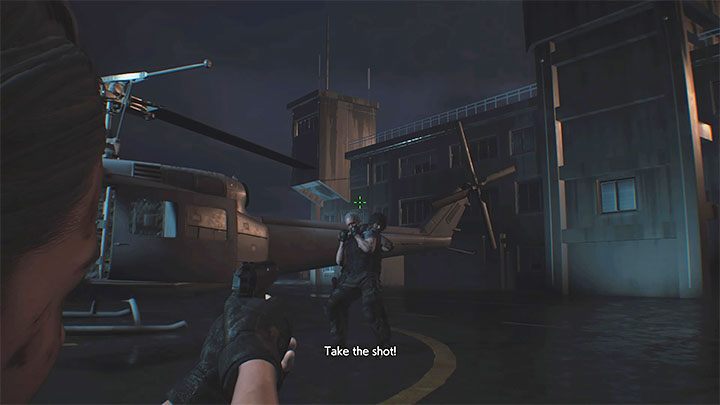 After watching the final cutscene, you have one last thing to do - you have to shoot Nicholai, but don't hit Carlos. A successful hit will launch next cutscene.

Don't turn off the game after the end credits have been displayed. Once they are displayed, the game will show a secret post credits scene.